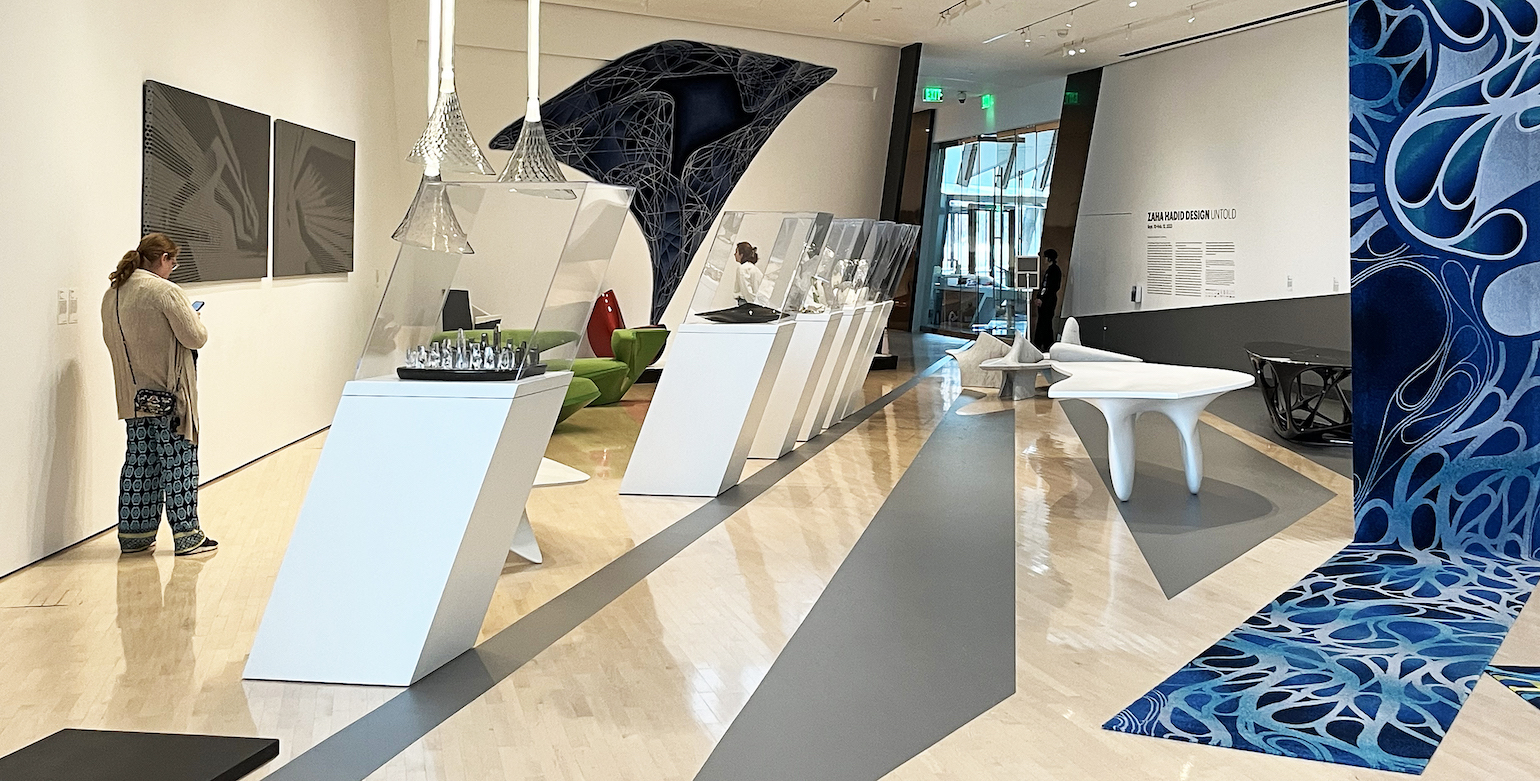 When the Eli and Edythe Broad Art Museum, designed by the late Iraqi-British architect Zaha Hadid, opened at Michigan State University 10 years ago, the structure was heralded as one of the most commanding pieces of modern architecture on any Midwestern academic campus. As Artforum noted at the time, the 46,000-square-foot structure is “not so much a building as an event.”

That pretty much nails it. Comprised of juxtaposed blocks of parallel steel folds and pleats, and emerging from the ground at skew angles, students immediately nicknamed the $45 million project the “spaceship.” The Broad (pronounced “Brode”) is an aggressive, entertaining structure dropped between MSU’s academic-revival class buildings and the Grand River Avenue commercial strip, a building that makes little visible effort to harmonize with its surroundings — even as it feels somehow perfect in its location. Indeed, the Broad resembles nothing so much as an alien vessel that plowed into the earth at high speed during an emergency landing. 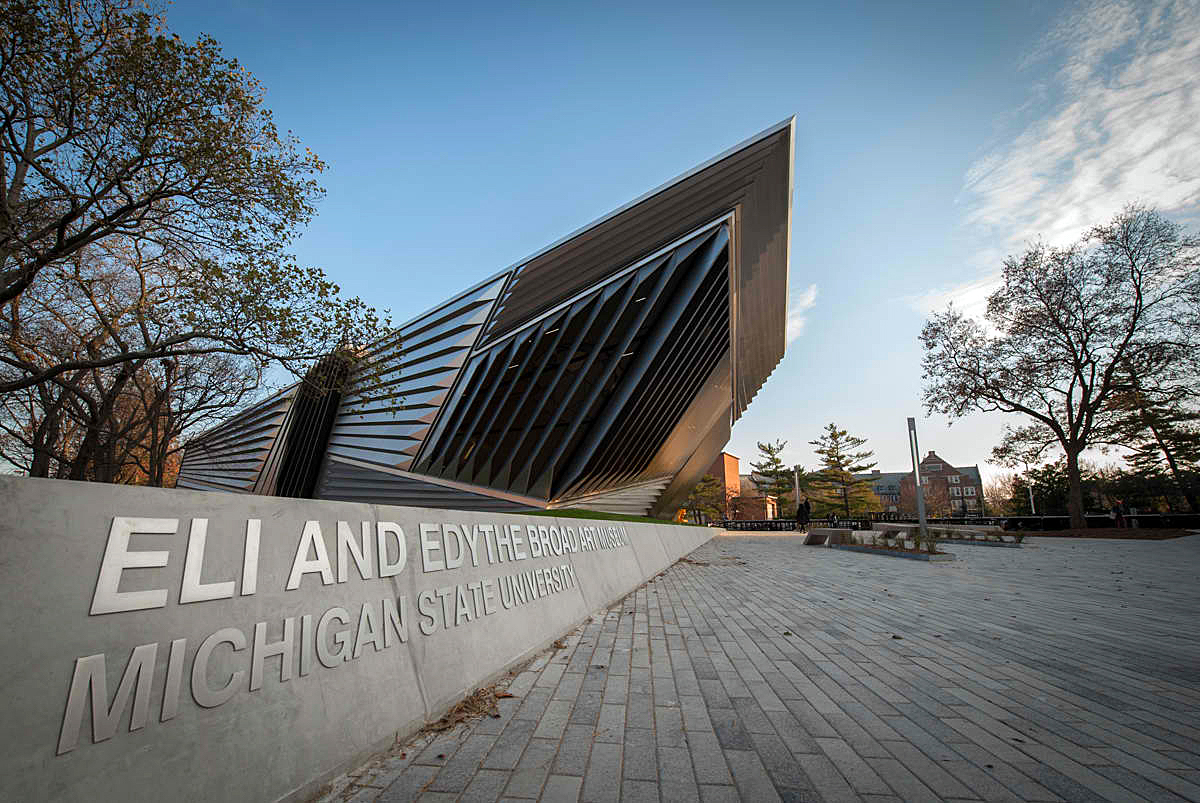 If the work of Hadid, a Pritker Prize-winner who practiced for decades in London until her death in 2016, challenges both geometry and convention, much the same can be said for the Broad’s exhibition up through Feb. 12, Zaha Hadid Design: Untold. This career retrospective, curated by the Broad’s former director, Dr. Mónica Ramirez-Montagut, and Woody Yao of Zaha Hadid Design, spans 40 years of creative work, and sprawls over three floors. Rather than concentrating on her buildings, Untold spotlights Hadid’s non-architectural work, including tables, chairs, colorful rugs, chandeliers, a tea service, a chess set, and a car prototype that looks a bit like a sharp-nosed egg with wheels. She even brought her skills to bear on sneakers and outré fashion. 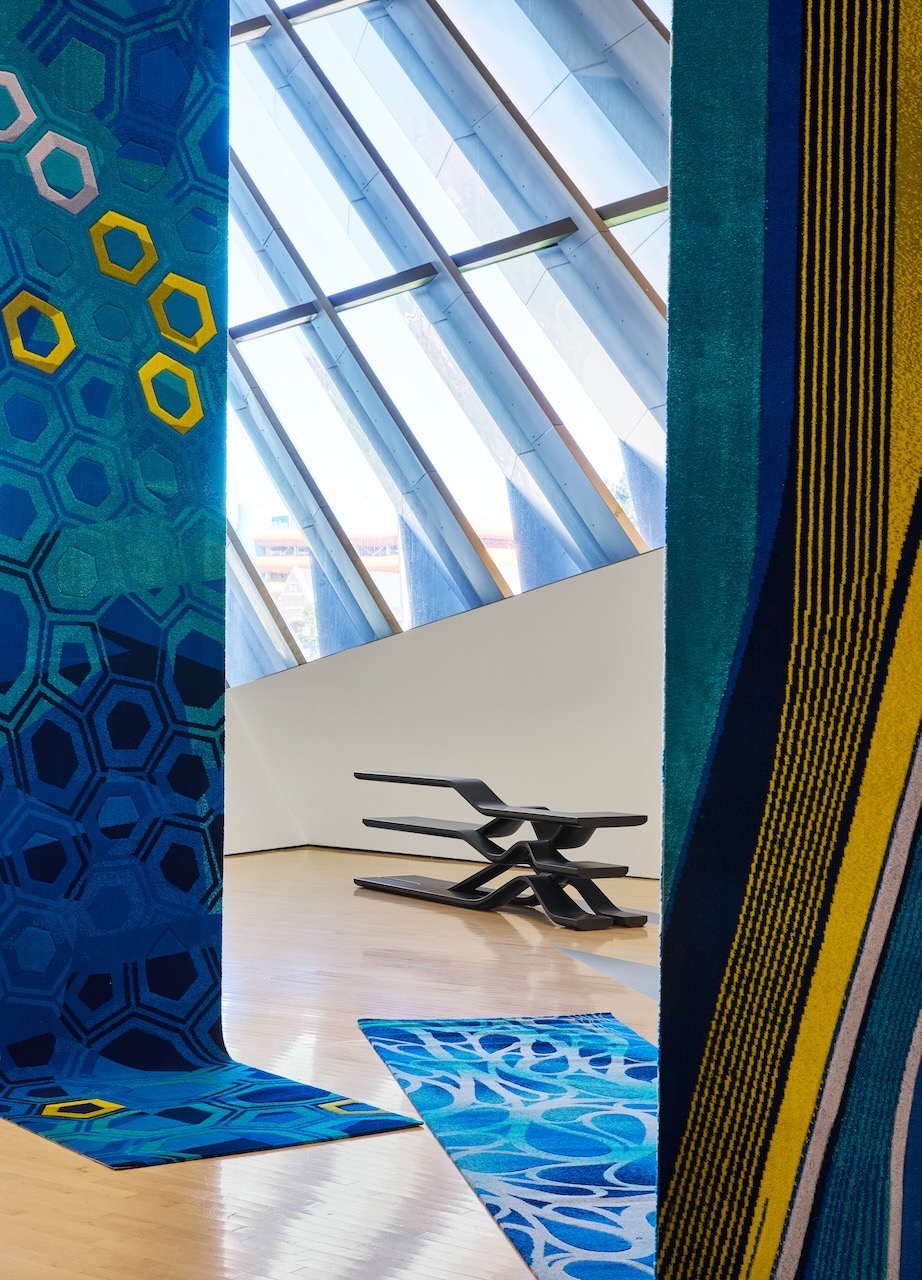 For their part, Hadid’s buildings have a habit of upending our expectations for what a structure ought to look like. In addition to the Broad, one of her best examples is the large, crystalline egg she balanced on top of a traditional, 19th-century building for the Port Authority of Antwerp, Belgium. Or you could point to her elegantly curvilinear Aquatics Center built for the 2012 London Olympics.

In like manner, the artifacts in this show challenge age-old assumptions for what shape ordinary objects should assume. “There are 360 degrees,” Hadid famously said. “Why stick to one?” Following this dictum, tables, chairs and shelving units in Untold shake off any pretense of rectilinearity or standard form, morphing into instruments at once sinuous, expressionist and functional. As Broad Interim Director Steven L. Bridges put it, these works “ask us to think and see things differently at every turn.” 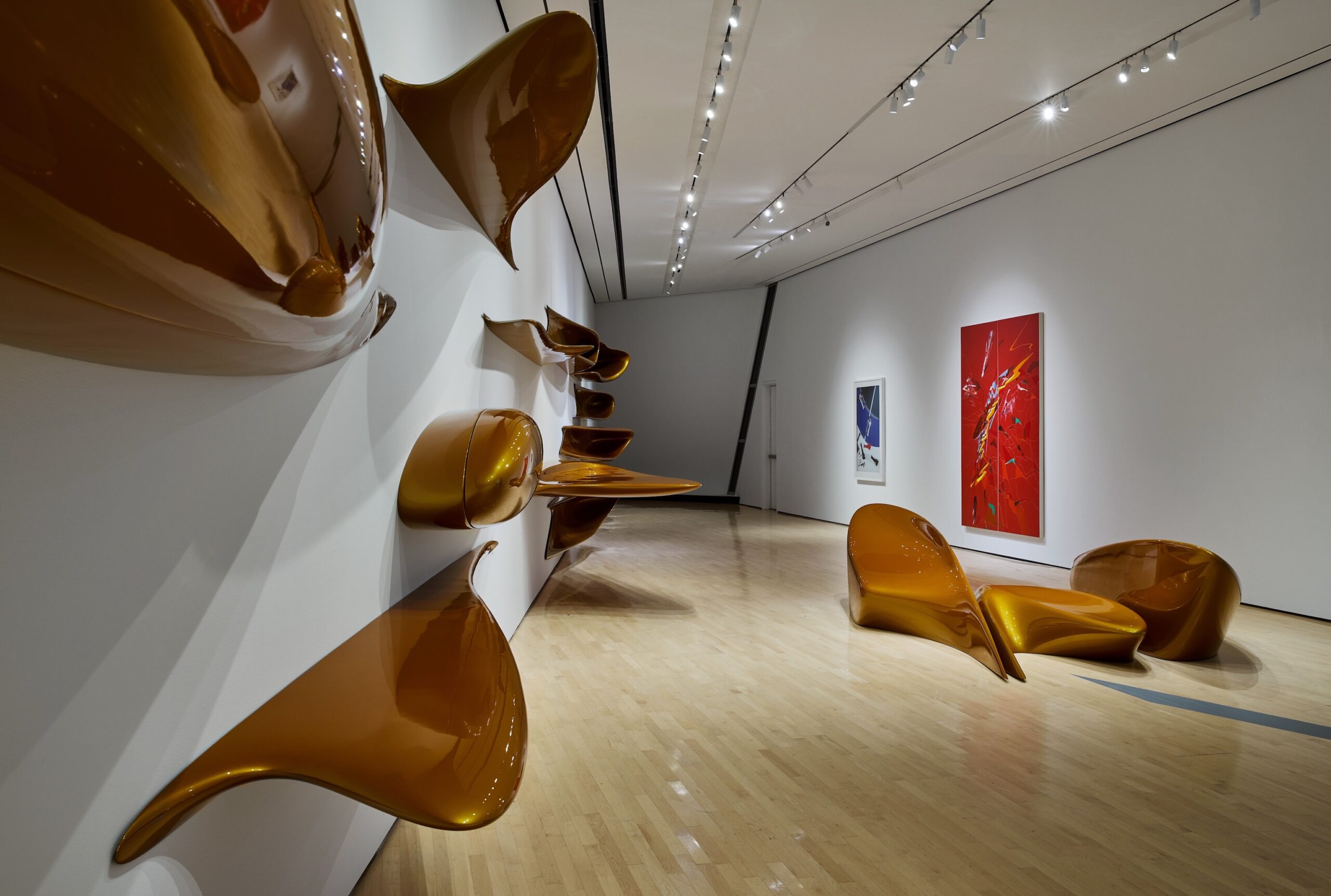 Born in Baghdad in 1950, Hadid graduated with a mathematics degree from the American University in Beirut, Lebanon, before moving to London in 1972 to attend the Architectural Association of London School of Architecture where she won the Diploma Prize on graduating in 1977. Two years later she founded Zaha Hadid Architects in the British capital, though she wouldn’t complete her first building, the swooping Vitra Fire Station in Weil Am Rhein, Germany, until 1993.

Most of Hadid’s designs were built abroad, perhaps unsurprising for a European architect. She did, however, design a condo tower that’s nothing but curves adjacent to New York’s High Line, as well as the Lois and Richard Rosenthal Center for Contemporary Art in Cincinnati – a handsome exercise in Brutalist block geometry that was the first major American art museum designed by a woman. As much an educator as a pioneering designer, Hadid taught at London’s Architectural Association, and held guest professorships at the University of Applied Arts in Vienna, as well as Columbia, Harvard and Yale. 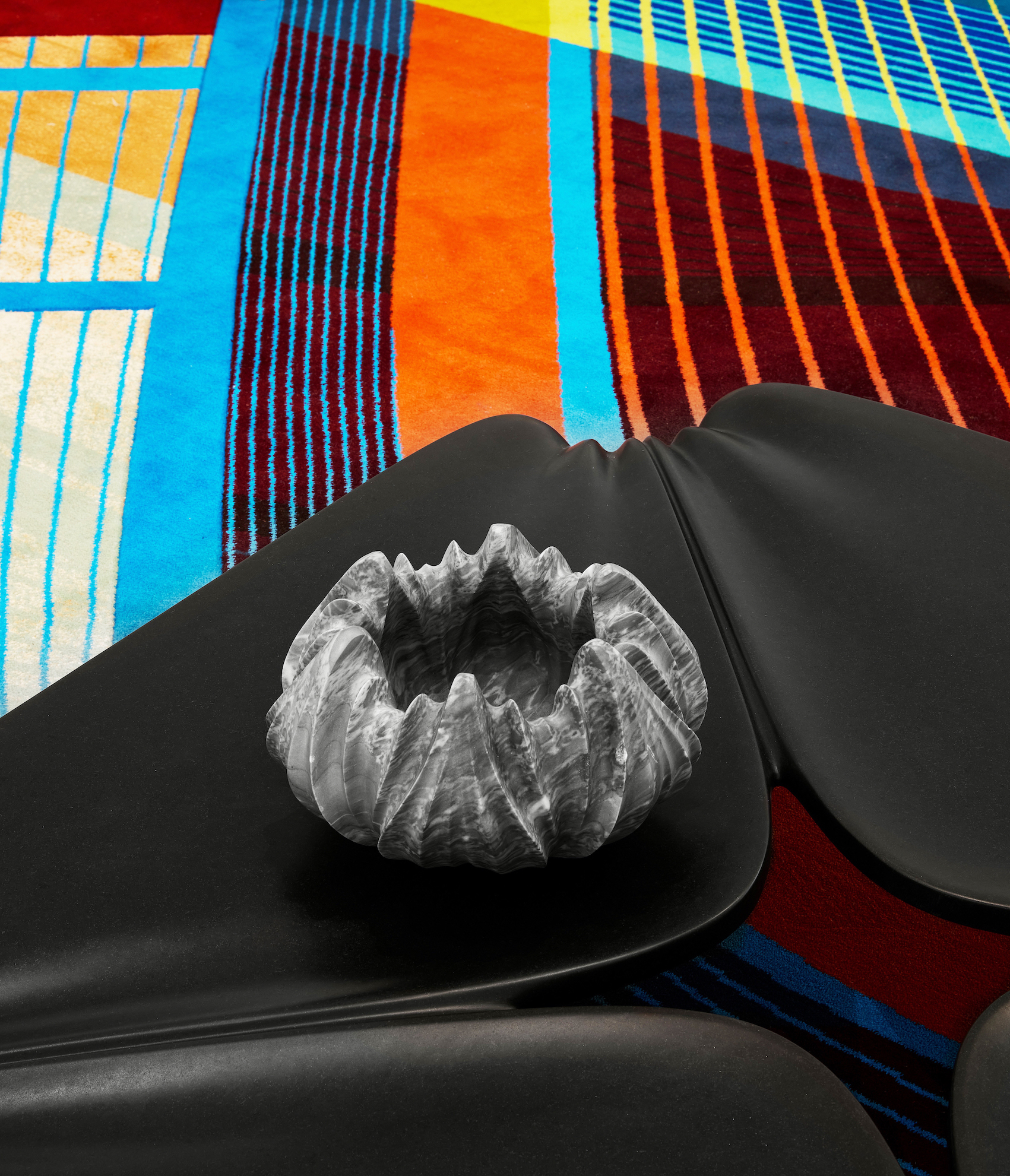 Hadid’s work is often called “transformational,” and the pieces in this exhibition underline how radical her vision could be. Indeed, The Guardian dubbed her “the queen of the curve” for her boundary-pushing architecture. Starting her career in the 1970s, Hadid was very much the exception in a profession dominated by men who didn’t necessarily take kindly to a brilliant Iraqi woman. Small wonder, then, that one of the adjectives most commonly used to describe her is “fearless.”

That gutsiness, tempered by extraordinary vision, can be found all over the Broad Museum, both in Untold and the structure of the interior spaces themselves. Cutaways allow for dramatic vistas from the third floor down to the second, and the walls, depending on where you are in the building, tilt from 15 to 40 degrees off the perpendicular. Much like Frank Lloyd Wright’s Guggenheim Museum in Manhattan, Hadid’s Broad Museum is as much an experiential thrill as an envelope to house artifacts. In this respect, going to Untold is something of a twofer – both an intriguing exhibition and a passage through mind-bending architecture. 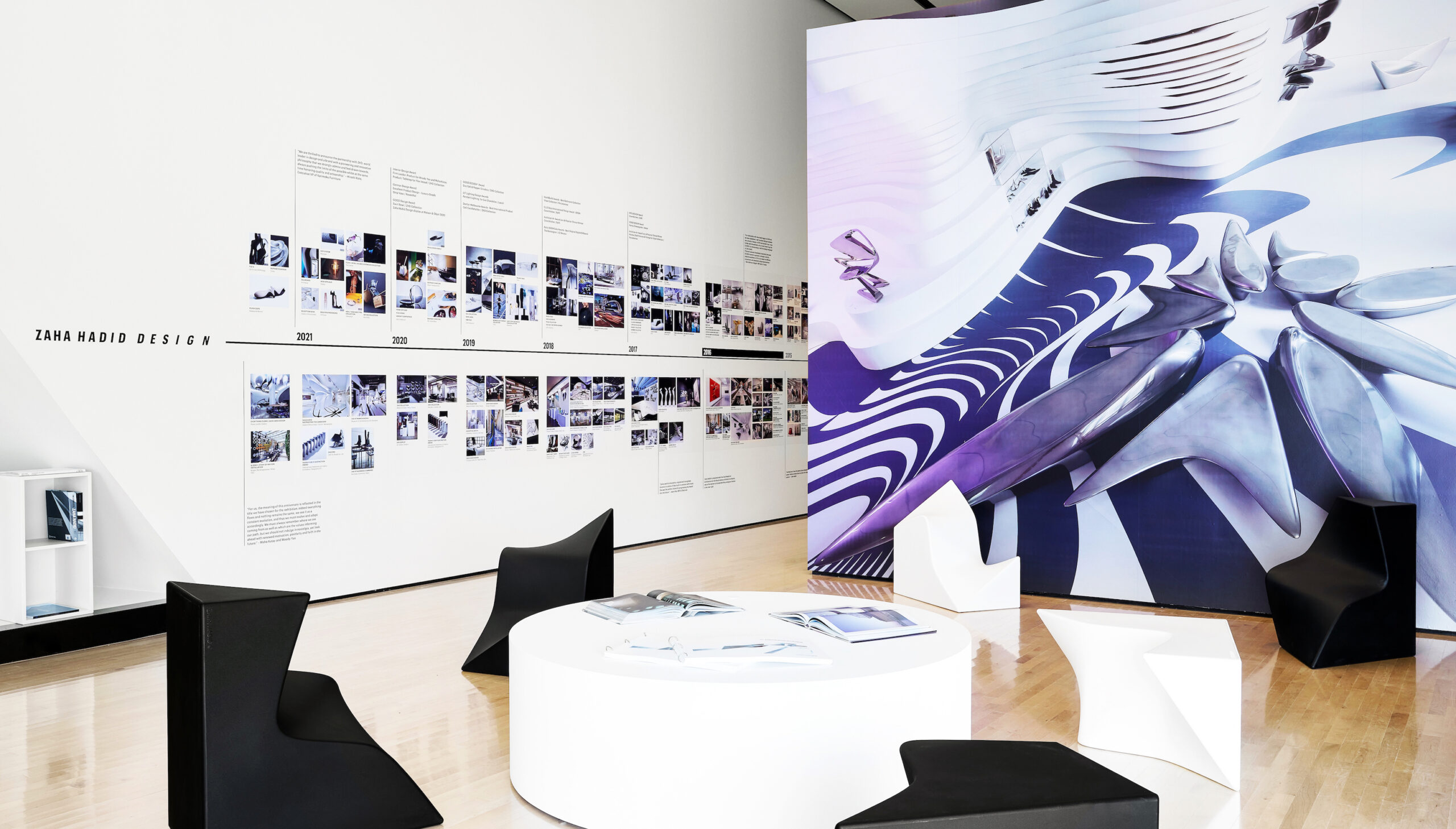