The gallery is designed in such a way that viewers naturally move through the space in a counter-clockwise motion. A symbolic gesture—the cyclical and counter-clockwise arrangement of the photographs thrusts Detroit’s past into the present moment—linear time dissipates as recurrent history reflects back at the viewer.
A look (back?) into the mirror of history; motifs on situations that are strangely ongoing in Detroit’s and America’s present. In other words, the exhibition is a poignant reminder that we still have much work to do. The image planes are brimming with people: striking, gathering, celebrating. Of course, there are quiet moments of pleasure, too.

In its totality, the exhibition captures a parallel Detroit that is not so different from today, despite the modern trimmings that have made the city today appear different prima facie. 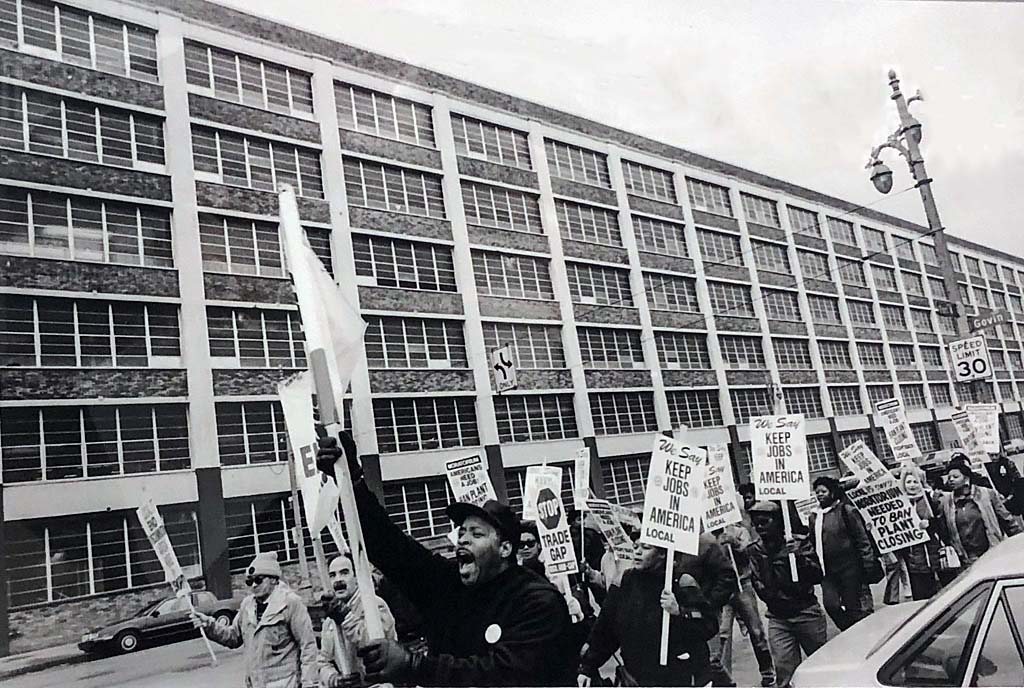 Andonian’s photograph, Fleetwood Cadillac Plant, 1987, captures a strike at General Motors automobile factory, likely before it closed the same year and left 1,500 workers jobless. There is a sense of solidarity between the picketing crowd, likely workers who were facing joblessness upon the plant’s closing. The photograph recalls the recent past: the nearly six-week-long United Auto Workers strike of G.M., which concluded in October of 2019 with workers successfully gaining wage increases and additional benefits; it also echoes the more than soon-to-be-laid-off workers at the G.M. Hamtramck-Detroit. 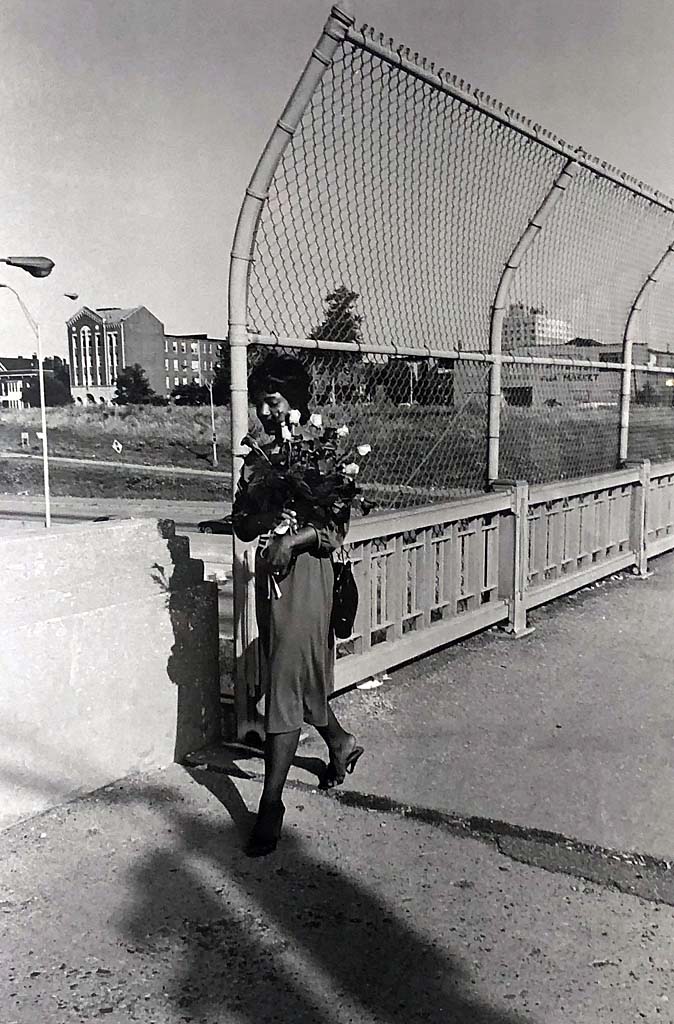 Triest’s image, Woman with Roses on Overpass, Summer 1983, is a sweet moment. Flowers cover a portion of the woman’s face, and although the photograph is in black-and-white, one could swear that the roses are yellow, or maybe pink. The viewer enters the frame and can imagine the vibrancy of the hot, summer day and the smell of the roses. It is difficult to say if she is aware of the camera or not—does she gracefully look away—knowingly? Or is she just as wholly absorbed as we are on her walk? 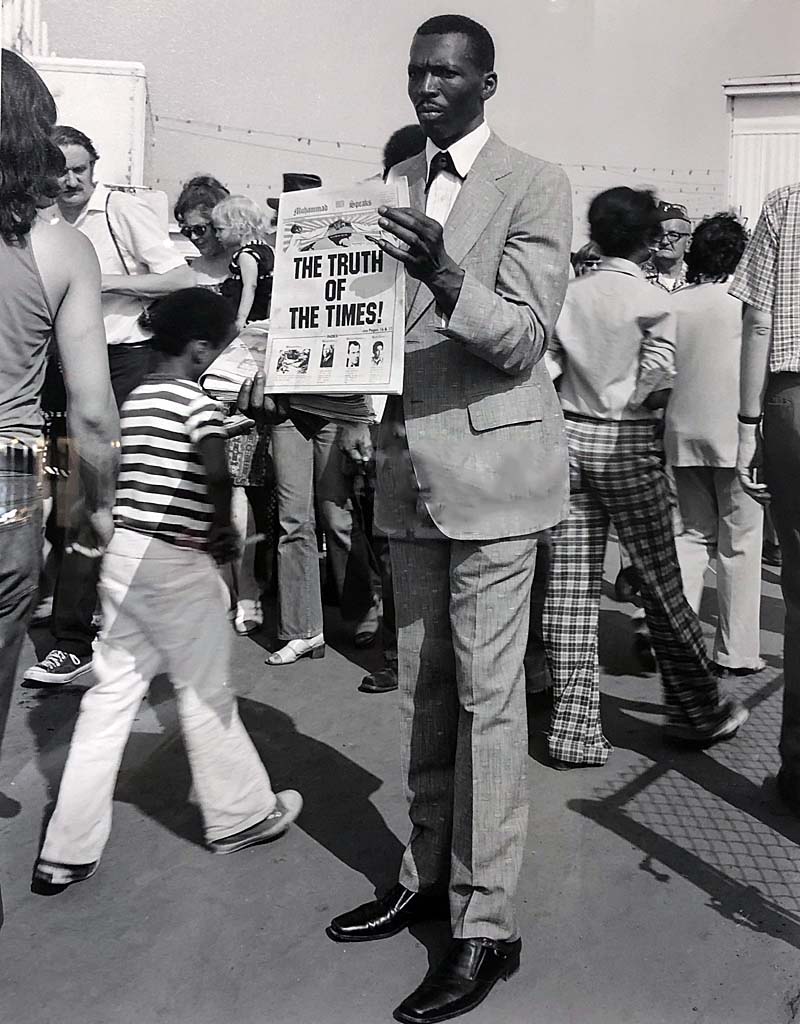 Jordano’s Man Handing Out Muslim Newspapers, Detroit 1973 is of a man at perhaps the state fairgrounds or a public outdoor event passing out Mohammed Speaks the official newspaper of the African American political and religious organization the Nation of Islam, from 1960 to 1975. His brow is furrowed perhaps because of the camera nearby, because of bright sun, or a mixture of both. At first glance, he looks ahead focused intently on something else, however on second glance, we realize he could be looking at the camera. His crisp suit and pensive stance impart an absolute seriousness and determination. 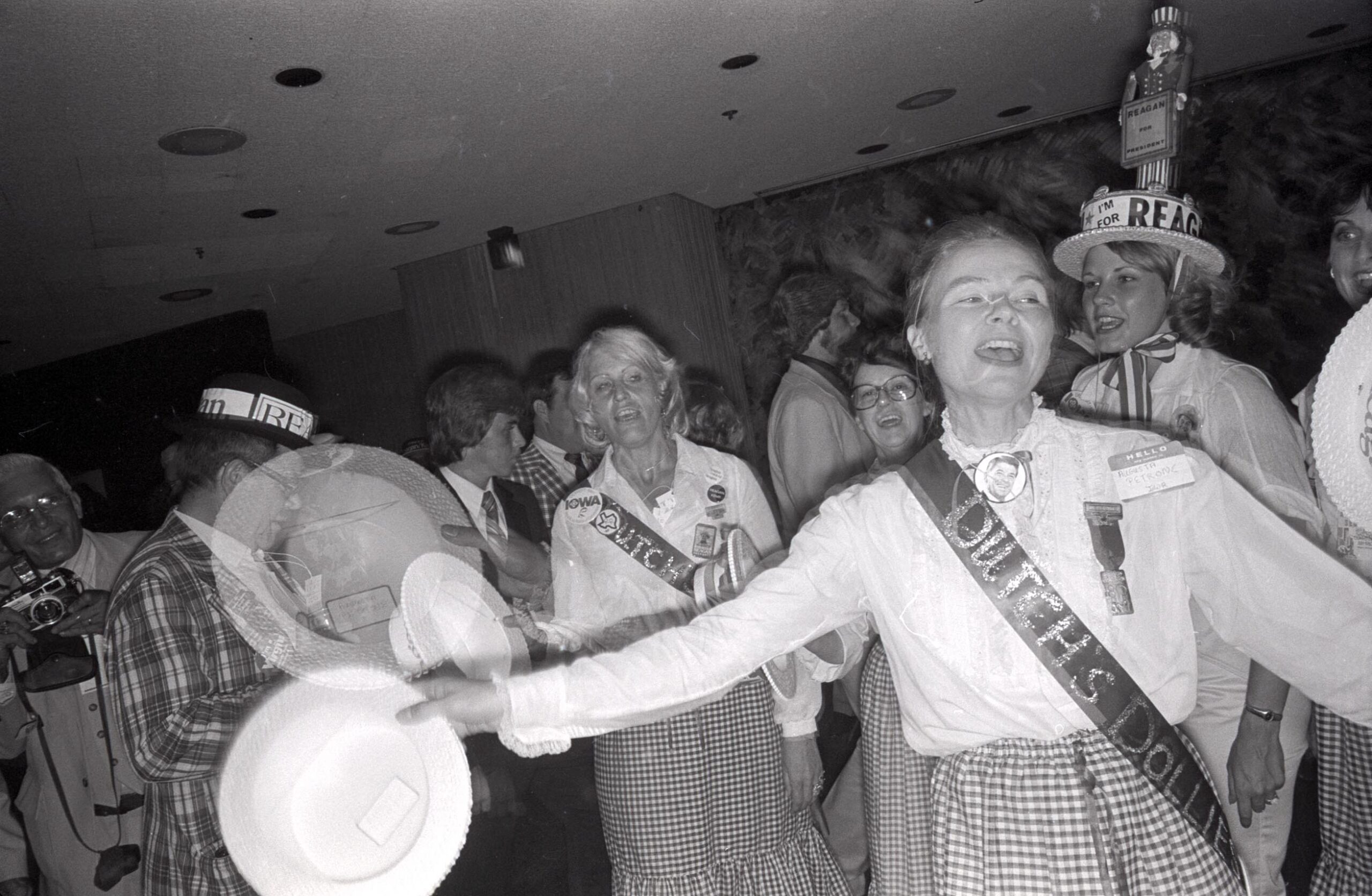 Griffith’s image Detroit, Michigan 1980 depicts a bevy of blonde women bearing sashes that read “Dutch’s Dollies,” along with matching gingham skirts and sheer, white blouses. Men are dispersed behind them. Dutch was Ronald Reagan’s nickname, and surely this was the Republican National Convention of 1980 held at the now-defunct Joe Louis Arena. On the right side of the image plane is a woman adorning a patriotic “I’m for Reagan” boater hat. The women are in song or in a chant. Not too dissimilar from the 2016 RNC outfits, except for the fact that at the latter convention, the skimmer hats were replaced with cowboy hats, and the outfits were patriotic cum cowboy regalia. 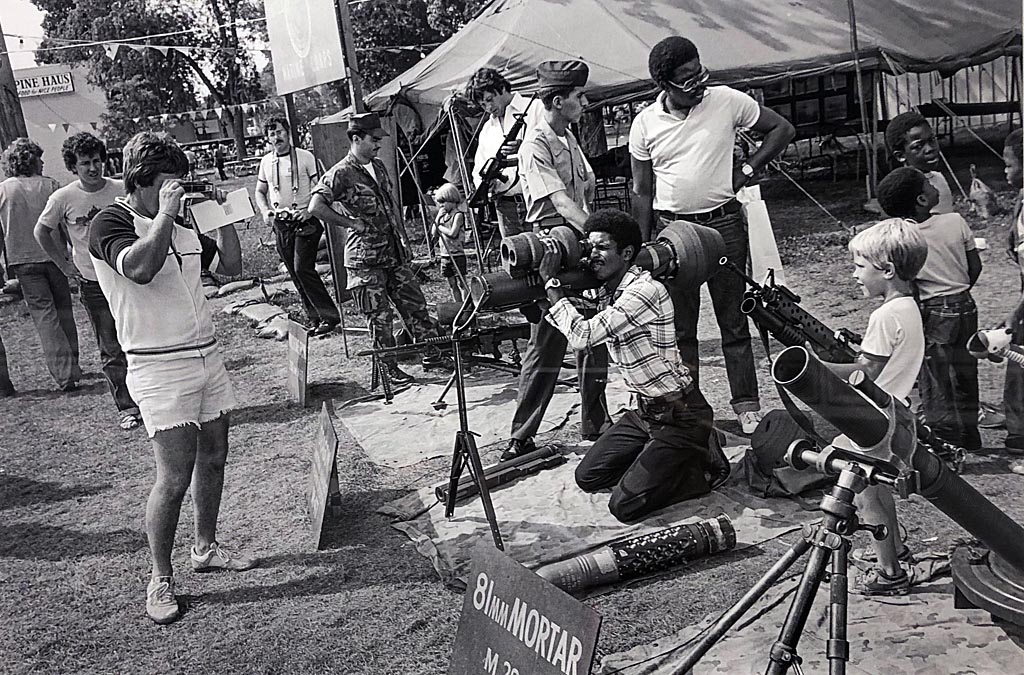 In Hudson’s photograph, Detroit, State Fairgrounds, 1980, the focal point is of the man, kneeling on a blanket; he gazes through the eyepiece of an 81 MM Mortar assault weapon. The M29 Mortar was notably used just five years prior—throughout the duration of the Vietnam War. The man is flanked by other men and boys. Close by, on another blanket, stands a young boy, five or six, passively holding a rifle and smiling half-heartedly at his father snapping a photo.