Michigan’s Great Lakes: Photographs by Jeff Gaydash at the Detroit Institute of the Arts on view at the de Salle Gallery from November 16, 2019, to May 3, 2020, presents nearly a decade of Gaydash’s work. A succinct retrospective, the exhibition documents his excursions to the Laurentian pools of the upper mid-east region of North America and their contiguous landscapes. His photographs, pristine, black and white prints, depict both natural and man-made phenomena in and around the largest aggregate of freshwater lakes on Earth, by total area. They possess a certain duality; a romanticism found in early landscape photographs of the late-nineteenth-century by photographers such as Ansel Adams and Edward Weston, synthesized with the industrial photographs of the mid-twentieth-century by photographers such as Charles Sheeler and Margaret Bourke-White. Gaydash simultaneously elevates the natural while he depicts a landscape peppered with man-made structure and industry. Something particular about what Charles Baudelaire once said of beauty stands out in this dichotomy of forms:

“Beauty is made up of an eternal, invariable element, whose quality is excessively difficult to determine, and of a relative, circumstantial element, which will be, if you like, whether severally or all at once, the age, its fashions, its morals, its emotions.” (Charles-Pierre Baudelaire, Painter of Modern Life (Penguin Book Ltd 2010),p.494

An ethereal softness of the natural—the water, land, and trees—juxtaposed with the temporal structures of the age—lighthouses, defunct concrete slabs, and active refineries— make for beautiful images. Perhaps beauty is, “always and inevitably of a double composition,” as Baudelaire theorized. To qualify: Baudelaire’s opinions in mid-nineteenth century France were at times utterly erroneous, but that is another story and this theory of beauty as something dual-natured is worthy of examination.

In “Rockport Ruins,” fog emanates from Lake Huron, both the water and the mist from a decrepit collection of what appears to be lumber, iron, and concrete to the right of the frame. Rockport was a limestone quarry, now it is a state recreation area. The pine trees on the distant shore of the harbor are hazy along the horizon line. The wooden stumps jut-out of the water like jagged teeth—sharp and uninviting; the remnants of industry sharply contrast against the placid waterscape. 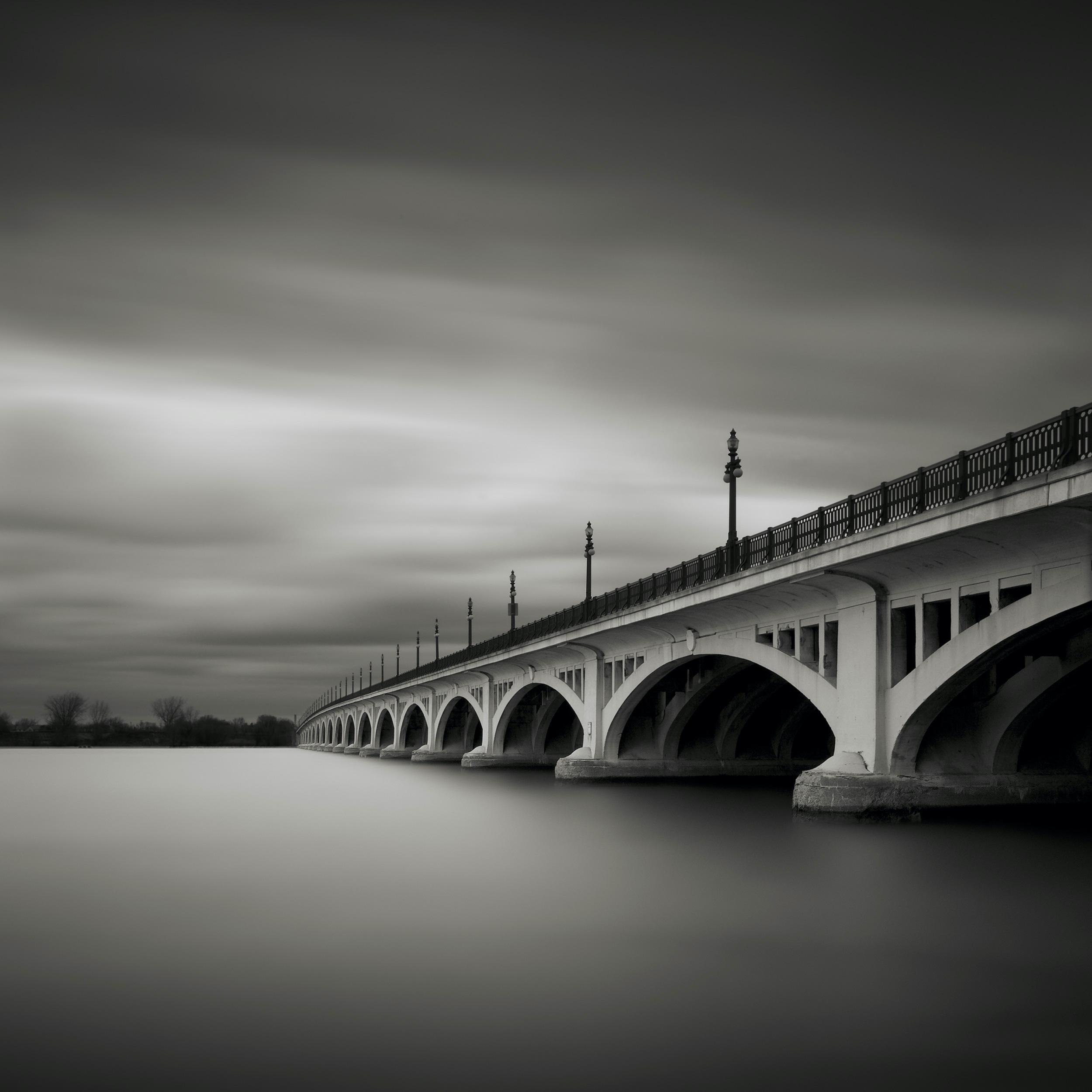 Both the water and the sky in, “Belle Isle Bridge,” have an otherworldly smoothness due to the slow-shutter speed Gaydash often utilizes in his process. When the shutter of the camera is open for a longer duration, the resulting image displays the passing of time represented in the slight blur. In addition, we see the grandeur of the Douglas MacArthur Bridge that connects Detroit to Belle Isle. Built in 1923, Gaydash’s chosen title evinces a sort of longing for the bridge’s original name as well as a time passed. The cantilevered concrete arched bridge feels as if it continues infinitely into what the vanishing point of the image. 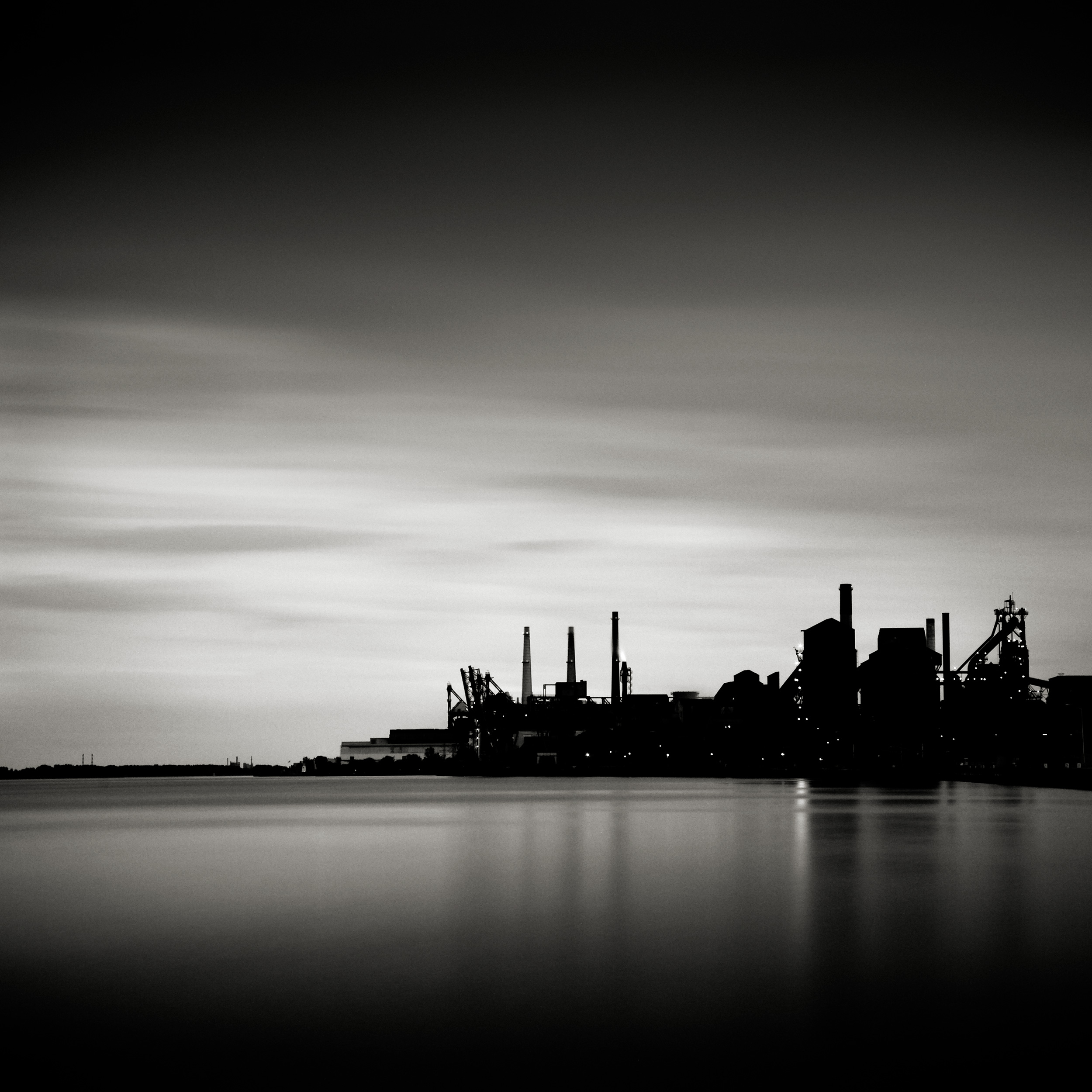 In “Zug Island,” possibly the most striking photograph in the exhibition, the looming U.S. Steel refinery’s silhouette at night contrasts to the feat of human technology exemplified in “Belle Isle Bridge.” An industrial skyline is mirrored, albeit nebulously, in the eerily still Detroit River. If not for the reflection, the viewer might overlook the monochromatic flames which emanate from the plant, lapping at the thick murky air. Whether Gaydash intended to document an environmental issue or not, is perhaps beside the point; the photograph has a narrative of its own. Zug Island is nestled amongst multiple plants and refineries in the 48217 zip code of Southwest Detroit, known for being the most polluted in Michigan. 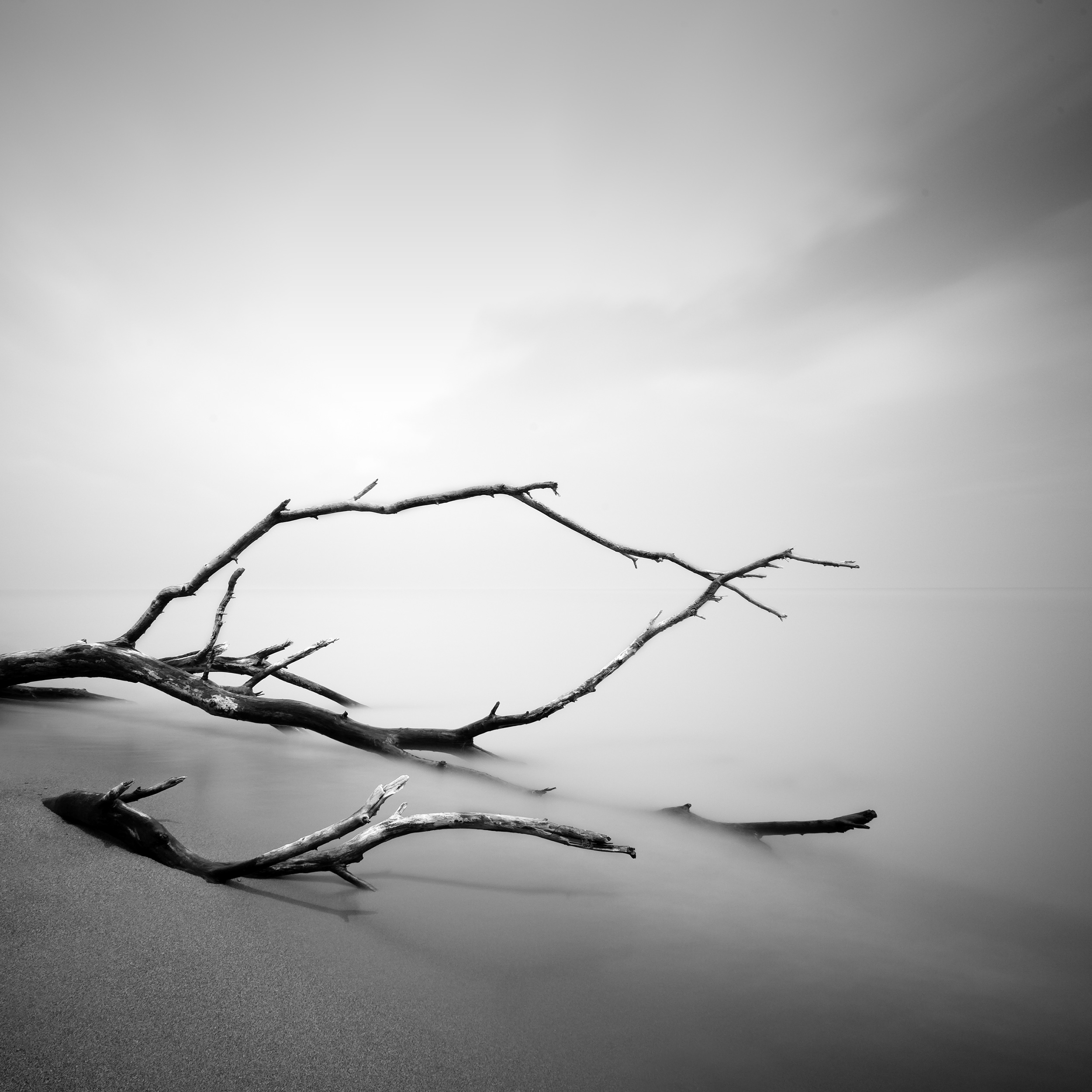 “Stranded,” feels antithetical to “Zug Island,” the tight framing of the tree branches in the tide of Lake Erie, in southwestern Ontario’s Point Pelee National Park, are a far cry from the industrial landscape. It exudes a sense of serenity and solitude, one discordant with the representation in the former photograph.  In this unfettered depiction of nature, the water and sky are a bright, silky grey, and blend together seamlessly. There is no horizon line, and if there were, it would be turned on its side. What the viewer thinks they see (an environment untouched by humanity) and what the reality is, is suddenly called into question.

The strength of Jeff Gaydash’s work lies in the cohesive, uninterrupted flow of the sublime landscape. His technically precise and masterfully printed images perfectly highlight the unique geographical feature that is the Great Lakes. Perhaps as viewers, we know not whether to celebrate the man-made as innovative or to critically examine our collective footprint in late industrialism. A similar ambivalence was captured in both the early and late landscape photographs of the modern era, as utopian images of the natural world gave way to the feats of human ingenuity, and eventually bled into more exasperating photographs of industry and environmental degradation. As viewers, we are invited to delve into this ambivalent, yet meditative space created by Gaydash. It is this with this paradox that we must contend. The exhibition, Michigan’s Great Lakes: Photographs by Jeff Gaydash does not heed a didactic warning of ecological doom, but rather is a nod—a poignant, cogent reminder—that the Great Lakes are a powerful yet vulnerable resource within a delicate ecosystem of which humans are a part.

Michigan’s Great Lakes: Photographs by Jeff Gaydash at the Detroit Institute of the Arts through May 3, 2020