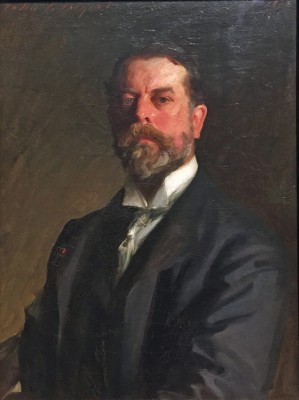 If you’re considering a trip to New York City, the Metropolitan Museum of Art (a.k.a. the Met) is a must see, especially if it is your first visit. The museum was conceived in Paris in 1866 and built in New York City in 1870. Located on Fifth Ave on the east side of Central Park from 80 to 84th Streets, the Beaux-Arts building is the largest museum in the United States and averages five to six million visitors a year. The museum has seventeen departments and is capable of hosting several major exhibitions at one time. The current exhibition, Sargent: Portraits of Artists and Friends, opened June 30, 2015 and runs through October 4, 2015.   The exhibition originates from the National Portrait Gallery in London, curated by Richard Ormond, Elizabeth Kornhauser, and Stephanie Hendrich, who organize a collection, partly of commissioned formal portraits. Sargent is an American (1856-1925) who spent much of his time in Europe, returning to America for lengthy visits in Boston and New York, where his subjects were actors, musicians, artists and writers. Sargent seems deeply engaged in the culture of his time, and always open to new influences and friendships. A few of the portraits in the exhibition are of famous artists such as Claude Monet, Auguste Rodin and the writer Robert Louis Stevenson. 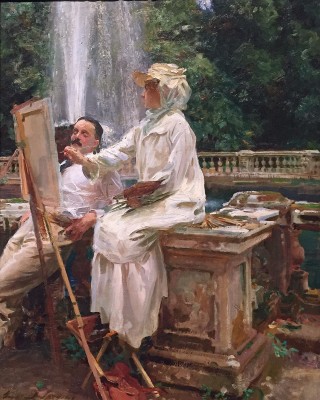 The Fountain, was painted in 1907, where Jane de Glen is shown painting plenaire beside the great fountain Villa Torlonia in Frascati outside Rome. The pool lies at the top of a cascade of falls down the hillside to a Renaissance villa. Sargent captures so eloquently what he himself is so good at, the facility to compose and capture the spontaneity of the moment. Few artists of his time have the degree of visual theater in their work, combined with a gift for drawing with such gesture and realism. It was as a young student in Paris that Sargent studied with Carolus-Duran, who eventually referred to Sargent as his finest pupil. 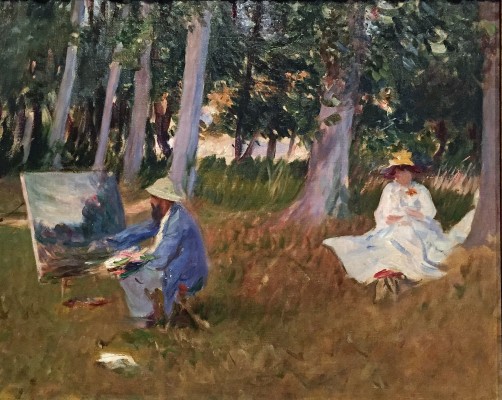 John Singer Sargent – Claude Monet Painting by the Edge of a Wood 1885 Tate: Presented by Miss Emily Sargent and Mrs. Ormond through the Art Fund 1925

It was during this early time that Sargent captured this private moment of Claude Monet painting, with his future wife Alice Hoschede, as he worked on what is thought to be the painting Meadow with Haystacks near Giverny. For Sargent, this impressionist influence would stay with him for a lifetime, as Impressionism was the name given to a kind of observation that processed the moment as a phenomenon of optics base on the intensity of the outdoor light. It is well documented in letters that Sargent befriended Monet, and acknowledged him to some degree as an influence. In 1889 Sargent painted a portrait of Claude Monet while they were together at the Salon. 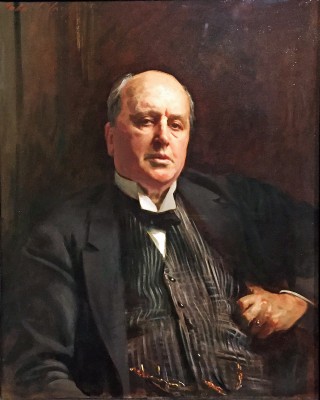 As it turns out, Sargent and expatriate American novelist Henry James became friends as they both recorded the social scene on the transatlantic voyages between the United States and Europe. Close friends for forty years, James remained a supportive critic of Sargent’s work. James was one of the first to recognize Sargent’s talent. In 1913, it was a group of James’s friends who decided to commission a portrait to celebrate his seventieth birthday. The study of the enigmatic literary genius provides the audience with a rich and sympathetic depiction of Sargent’s aging friend. 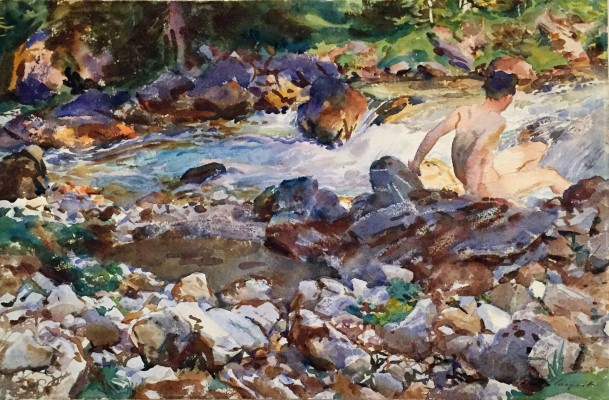 Among the 92 works of art in the exhibition, Sargent’s Mountain Stream typifies much of his watercolor work. The painting is owned by the Met, and captures the flowing water among the French Alps in 1910. A young, nude male in the scene addresses the question of Sargent’s sexuality. In a biography, Sargent is portrayed as “a complicated, exuberant, passionate individual with a homosexual identity,” a lifelong bachelor surrounded by family and friends. The painter’s great-nephew Richard Ormond, himself a Sargent scholar, says “If [Sargent] had sexual relationships they must have been of a brief and transient nature and they have left no trace…. We simply do not know, and decoding messages from his work is no substitute for evidence.” Given the context of the time in which Sargent lived and a close look at his work, particularly the number of male nudes he painted, it is this writer’s opinion that Sargent had an attraction to men that today would be fully accepted. 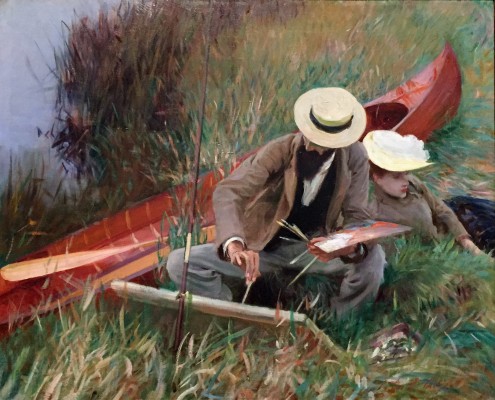 The painting An Out-of-Doors Study demonstrates how Sargent experimented with portrait compositions whose informality stood in contrast to his commissioned studio portraits. Here, his French friend and his young wife settle in the grass at Fladbury, England. Sargent’s approach here seems liberated from his standard studio work and features a compositional asymmetry, natural light, and a casual moment. It is paintings like these that leave their mark and go beyond studio portraiture.

John Singer Sargent was an American giant among realistic illusionary painters. Although there was a time period where his work was in disfavor, his popularity has risen steadily since the 1950’s as illustrated by the large-scale exhibitions of his work in major museums in the United States and Europe. Sargent increasingly turned to landscape painting as a respite from his portrait commissions. Time Magazine critic Robert Hughes praised Sargent as “the unrivaled recorder of male power and female beauty in a day that, like ours, paid excessive court to both.” He was sixty-nine years old when he died in London.

The Metropolitan Museum of Art    https://goo.gl/AXke6w