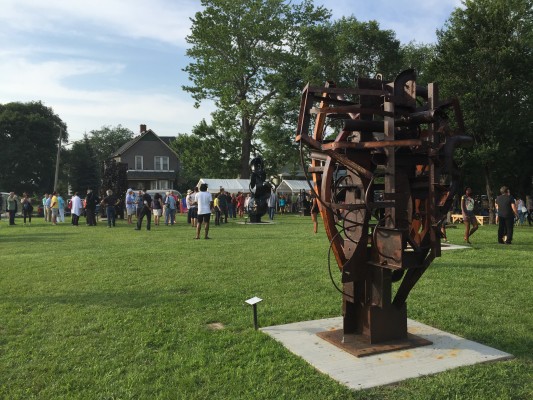 I honestly have never experienced a sculpture installation like the one Robert Sestok opened officially on July 10, 2015 in the mid-town area of a Detroit neighborhood, mostly for the benefit of all the people who live there. The Cass Corridor artist, through a neighbor, found vacant land at 955 W. Alexandrine Street. Sestok met with the City of Detroit and proposed a 200 X 200-foot space on empty available lots, which he eventually purchased, not far from his house and the studio that he built in the 1980’s. His vision was to create a community art-based non-profit organization, www.CitySculpture.org with a mission to promote civic engagement and the possibility of hosting public art events. The City Sculpture Park, after the ground being leveled, has 800 feet of continuous fence and a commercial rolling gate. Concrete foundations were poured to support and facilitate the installation of large and mostly welded steel sculptures that were created by Sestok over the past 35 years.

He says in his artist statement, “Early in my career the ‘downtown’ experience inspired deconstructivist methods for creating art. People were using found objects and other non-traditional materials in their work, tearing things apart and reconstructing them, processes that harmonized with the reality of the Cass Corridor in the 60s and 70s, and in fact still does today. This period had a profound influence on my approach to art that is particularly apparent in my sculptural work. For my sculptures, I use positive cuts for the figure (a silhouette representing Man) and negative cuts to express architecture (environmental space and its baggage). Welded metal works for this, takes me physically and spatially into the metaphor … making different objects connect … that’s why I like welding. There’s also a specific kind of permanency that comes with the way welded steel withstands the elements, giving extended life to the work.” 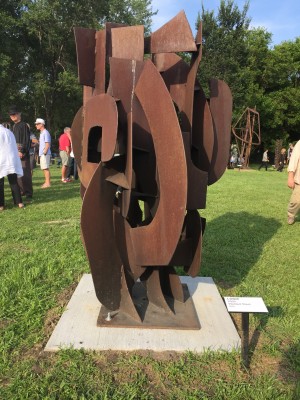 The work itself appears to be thematic. Each piece has a thread, usually a shape, size, material or abstracted idea and are vertical by nature. The welded steel has oxidized unless there is paint or stainless present. Comparisons evoke Joel Perlman, Mark di Suvero, and David Smith. But the overriding virtue of Robert Sestok is his fortitude and his altruism as illustrated by his curatorial Big Paintings @ The Factory in the summer of 2014 where Detroit artists used a large, industrial setting in Highland Park for their work. Called the Midland Invitational (on Midland Street), Sestok and building owner Robert Onnes called on artists to submit very big paintings, typically sized 20 X 30 feet, knowing the old factory buildings would easily accommodate the large canvases. 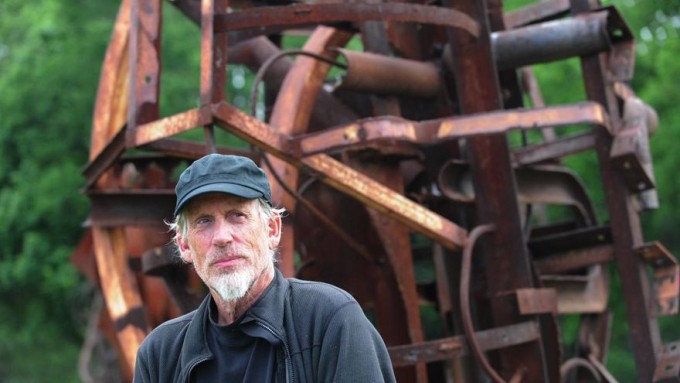 The new artists now working in Detroit that have graduated from art schools across the country and particularly in Southeastern Michigan, stand on the shoulders of artists like Robert Sestok. His artistic efforts and contributions have helped make Detroit fertile ground for a burgeoning artistic community.