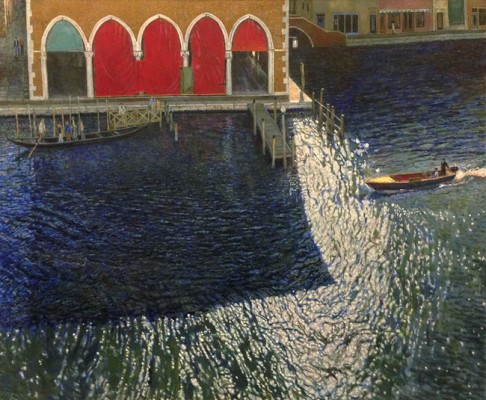 Tom Parish has spent more than two-thirds of his eighty-two years of life creating illusionistic oil paintings, and the work seems to attract more attention than ever. Although Parish, Professor Emeritus at Wayne State University, remains in the Detroit area to live and paint out his remaining years capturing the visual poetry of Venice, Italy, he has rarely exhibited a group of paintings in the Detroit area. Most of his exhibition work has been at the Gruen Gallery and the Gilman Galleries in Chicago, Illinois. Fortunately, the Robert Kidd Gallery in Birmingham, Michigan has procured fifteen of Parish’s large paintings of the Venice landscape for a show opening July 17, 2015 from 5:00 – 8:00 pm. “I became intrigued by the sturdy compositional blocks of color that frame and organize the artist’s traditional realist imagery. An especially entrancing element is Parish’s handling of water surfaces… For these passages, Parish weaves a tapestry of light and reflection that activate a lively dance for the eye.” said Ben Kiehl, Director at the Robert Kidd Gallery.

Educated at the Pennsylvania Academy of the Fine Arts, Parish’s various art-scene influences run the gamut, but his internal homing device has always seemed to keep his beacon on illusionistic imagery, focused for the last twenty-nine years on the textures and reflections of Venice, Italy. Parish’s body of work spans two thematic periods. From approximately 1960 to 1986 he painted foreign-like structures in an industrial landscape viewed from above. Then from 1986 to the present he has led his audience on a poetic journey through the Venetian landscape. Capturing perspectives in light doubled by reflections from undulating forms of water and architecture. Parish produces magical realism, to use a literary term, manipulating and imagining reality in such a way as to share with the viewer his romantic interpretations of a place he calls Zarna. In a recent exhibition catalog he says,

“The earliest source of my vision goes back to a farm in Northern Minnesota when my grandfather showed me a stream of mysterious water on our farm. I was not yet four years old. My work while living all these years in America’s “Great Lakes” has involved an imaginary island called Zarna, a sea of beds of stones and a full joyful experience, Venice.”

In the painting Dalla Ponte, Parish sets up his ‘way with water’ to lure the audience into his composition. Bringing the viewer forward, he delivers on a favorite theme, a kind of undulating water that is a mixture of current and reflection. The bricks of a canal wall appear in most paintings and become the backdoor to a simple abstraction, part and parcel of an overall realistic landscape image. 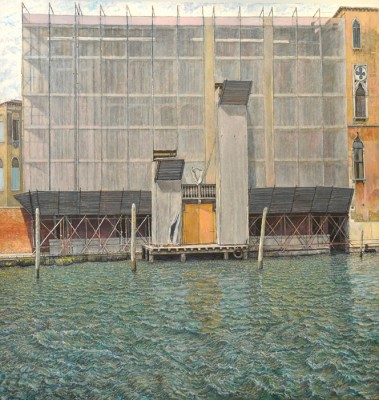 Sinking over the centuries due to natural processes building on closely spaced wooden piles and the pumping up of freshwater from an aquifer deep beneath the city, Venice remains in a state of rebuilding. In the painting Grattacielo Veneziano, Parish seizes on a construction site along a canal and plays with the contrast of the water and its reflection against the semi transparent protective tarp covering the renovation. As always, he carefully creates his composition and sets up a contrast between the grid and the organic nature of swirling water that may have been left by the trail of a waterbus. 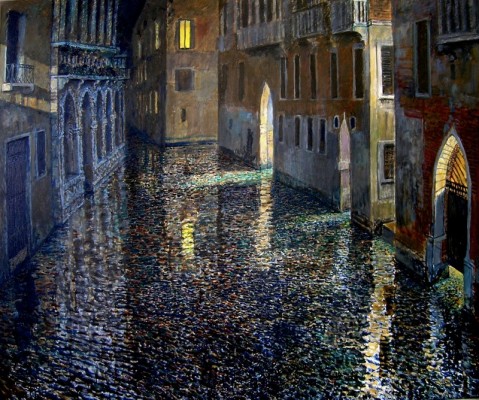 Through Parish’s eyes, Venice, a once marshy lagoon built on an archipelago of islands, transforms into place with never-ending inlets, an occasional speedboat, oscillating water during the day, and channels of light at night. These quiet moments of architecture and light invites the viewer into his world of meticulous studies of light, reflection and composition.