The Art of Shifting Stillness: Brian Day and William Harris 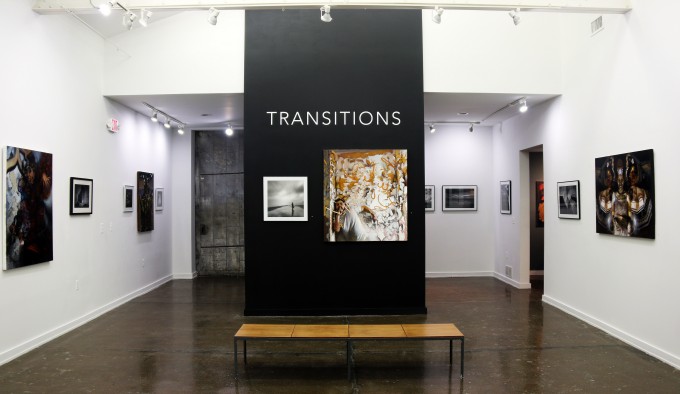 Galerie Camille’s current show features the work of two artists at two very different points in their careers- Brian Day, an established Detroit area photographer, and William Harris, a painter and former student at College for Creative Studies. At first glance, the two couldn’t be more different, stylistically, technically, or conceptually. That is part of the point, says Melannie Chard, director of Galerie Camille, a recent addition to Midtown’s mushrooming gallery district. “It is actually my intention to continue to exhibit established artists with newer artists, and you will see this theme in upcoming shows as well… I like that it provides an opportunity to introduce collectors to new work, and the artists seem to enjoy the collaboration which ultimately strengthens the artistic community.” Chard’s conviction that there is room for everybody in Detroit’s exhibition roster, and her commitment to showcasing new and potentially risky work, is welcome news that immediately sets Galerie Camille apart in a scene that can feel insular and difficult to gain exposure in.

The work of Day and Harris shown side by side is proof that Chard’s formula is potent. In nearly every respect, Harris is the Appletini to Day’s Grey Goose, neat- both get you there, via different styles, materials, and combinations. Both, however, derive from the same culture, and are hunting down the same distillation- the human figure as it inhabits, symbolizes, and claims its stake in iconic architectural structure. 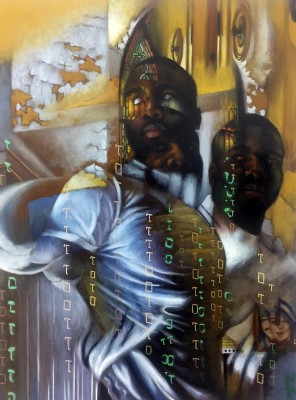 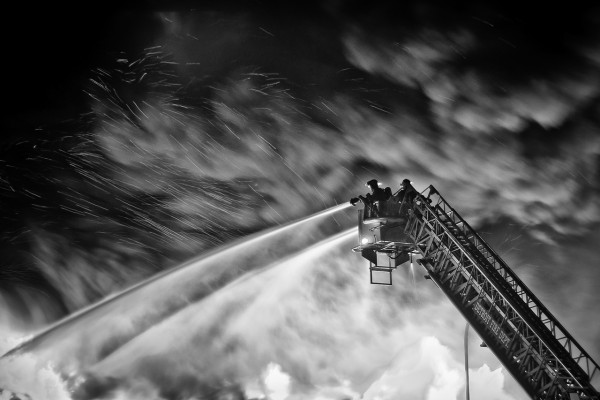 Harris is a hitherto self-taught painter whose style is in a state of fraught transition, as it becomes overlaid with academic techniques and compositional tropes. His work, at this point, maintains an ardent, romantic floridity and an endearing improvisational use of materials that speaks both to his naiveté and his sincerity. His subject matter involves various experiments in dissolving figural repetitions into cavernous architectural spaces, drawing imagery from Surrealism, documentary images of derelict architectural spaces, and what I can only define as a romantic music video aesthetic. 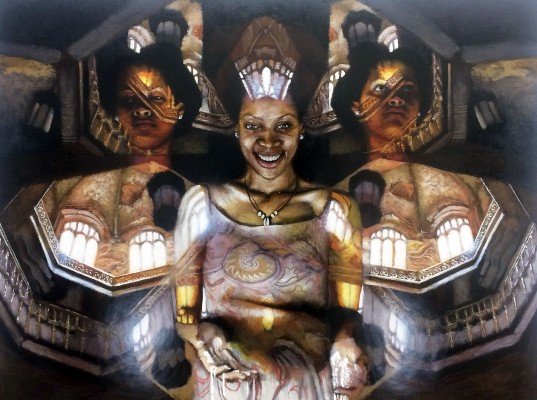 His technique and subject matter are still finding their way- his rendering of hands is particularly problematic, especially juxtaposed with his incredible facility with faces, and eyes in particular- his figures manage to be both iconic of the structures they are overlaid onto, and autonomous characters in their own right, who engage the viewer, from one piece to the next, with an unsettlingly steady, appraising return gaze. Harris’ technical foibles would be less distracting if they were more intentional and canny- which might, ironically, throw off the crystalline sincerity of his work.

Day, by stark contrast, is a mature artist in full command of his powers. His photographs are fluent masterworks, each finding a balance between content and form that evokes the early Constructivist photography of Alexander Rodchenko. 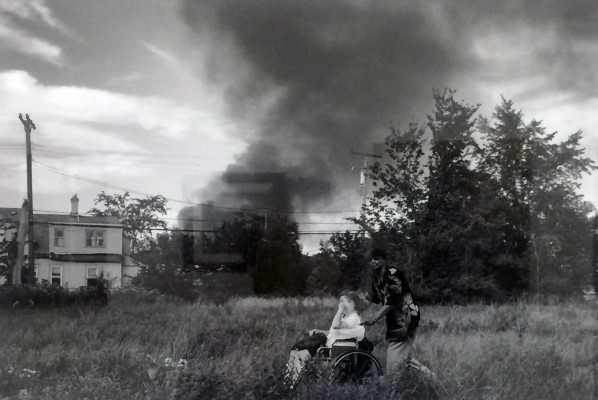 Like Rodchenko, Day grounds his work in a deceptively straightforward, documentary style that speaks simultaneously in a more subversive formal language, conjuring gorgeous abstractions in light and shadow even while capturing candid moments of human passage through urban space. Day’s documents of action, while political in their content (his body of work “Planet Detroit” depicts the ravages of house fires in run-down neighborhoods, seen up close as fire fighters battle with them, or at a distance, as grim vertical plumes of smoke rise against a scene of daily urban transit) dwell in the formal beauty of these arrangements of light and shadow as well, with a lightness of touch that offsets the potential for objectification that lurks in his subject matter- Day is able to see both horror and beauty from ground level.

The two artists share an interest in the vital role human action plays in the life of architecture, and, in turn, how the narrative of that architecture informs the culture that inhabits it- the embattled maintenance and slow decay of the structures that define our landscape becomes part of our viscera, as well as the scenery of our daily movements. It will be interesting to see where Harris takes his exploration of the figure’s physical and metaphorical weaving into structures. The formal lushness of Day’s work supplements, rather than distracts from, the problematic grittiness of his subject matter. Finding visual rhymes and formal touchstones between the two artist’s pieces is one of the great pleasures of “Transitions.” Both are asserting themselves as vital voices in this epochal moment that work made in and about Detroit is experiencing.