Somewhere Over the Rainbow is a Double Rainbow: Way up high with Shaina Kasztelan 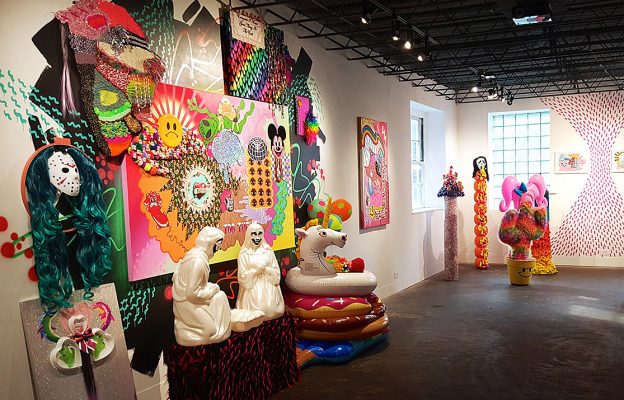 One of the most challenging aspects of grappling with mental illness is not just the negotiation of an emotionally fraught psychic territory, but the social pressure to conceal whatever struggles may be happening internally. For women, especially young women, this struggle is a subset of the prevailing demand to present a shiny, positive face to the world. In Somewhere Over the Rainbow is a Double Rainbow, at HATCH Art in Hamtramck through May 28th, artist Shaina Kasztelan effectively reveals the turbulent and colorful interior life of a young Millennial woman. This, her first solo outing, is an installation-heavy environment that immediately draws the viewer into a kind of psychedelic and intensely female headspace, via a chaotic accumulation of material culture that targets her as a consumer. 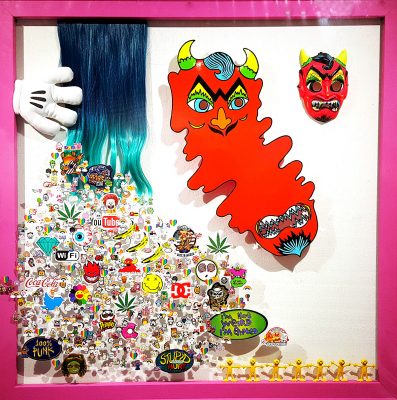 These materials include, but are not limited to: stickers, small toys, fake fur, plastics in innumerable iterations, decorative cake toppers, beads and cheap jewelry, a blow-mold nativity trio, fake fur, craft paper, artificial hair, and a series of pool floaties. Hearts! Rainbows! Unicorns! Kasztelan has plumbed the depths of the party-variety store in her search, and leaves no corner of her installation space unoccupied. One has a sense of stepping into a riot of Attention Deficit Disorder and teenage misanthropy, rife with cultural references that might be enigmatic to some, but readily identifiable to anyone within Kasztelan’s demographic. The nativity scene sports Insane Clown Posse face make-up; a cross-stitch bears an iconically self-pitying Nine Inch Nails lyrics; everywhere we encounter pop culture figures, from Mickey Mouse to the murderer from Scream, to the ubiquitous “Have A Nice Day” smiley face, in various interpretations. This is an interesting interplay between the objects Kasztelan has bought ready-made and incorporated into her texture- and color-rich compositions, and those that she assembles from scratch using craft materials; why bother to meticulously assemble a Mickey Mouse face from perler beads, when there are literally thousands of commercially made objects bearing the same visage?

This speaks to a kind of obsession, which is echoed in the endless repetition of shapes—often small toys that can be bought in bulk for a few pennies each. In “Baby Cactus is Happy,” a cactus shape covered in rainbow hair and wearing a pink inflatable wig bears dozens of tiny variety store plastic babies, the mere existence of which is slightly confounding. Indeed, when you start to zero in on any of Kasztelan’s works, the preponderance of oddly useless objects generated by our culture and marketed in the direction of young women begins to become unnerving. What message does it send, to be continually surrounded by things that are colorful, basic, and functionless. Kasztelan seems to have compensated for this material invasion of her head by creating an imaginary life for these objects, reimagining them into creatures, friends, and demons—golems of hyper-femininity—often by means of craft projects, another highly feminized activity set. As each creature takes shape, so it reflects some aspect of young womanhood, dark or light. “I Scream, You Scream, We All Throw Up,” is a tower of plastic spray foam, fused into a kind of totem pole with spray foam, and topped with a fright mask that is the most recognizable symbol from the “Scream” movie franchise. The mask is vomiting spray foam in lurid colors down the length of the totem pole, and this violent mixture of hoarding candy, binging, and purging, very successfully blurs the innocence of a child’s Halloween activity with the body image pressure applied to young girls as they emerge into puberty, and the resulting host of horrific eating disorders that are a scourge against this demographic.

Though presented in the trappings of frivolous girlhood, Kasztelan’s materials are a Trojan Horse for extremely intense concepts about sexuality, drug use, and mental wellness. Technically, each piece is incredibly rich in detail, seamlessly constructed (even in the event that drippy spray foam is being used as an adhesive, there is an intentionality and conscious hand at work) and remarkably successful at balancing literally hundreds of objects into well-balanced compositions. As a first solo outing, Kasztelan’s work already presents a strong self-awareness and adroit leveraging of a personal perspective that is often marginalized—that of the young woman, struggling to process a world full of expectations and distractions, and perhaps prone, in this struggle, to medicate some of the confusion into imaginary friendships. Somewhere Over the Rainbow is a Double Rainbow is a wild journey that brings home a surprisingly deep message.