There are exciting things happening at the Toledo Art Museum, the University of Toledo, and the gestating organization that will soon be on everyone’s radar, Contemporary Art Toledo, this September. Contemporary Art Toledo, the brainchild of Brian Carpenter (lecturer and gallery director at the University of Toledo) and Paula Baldoni (director of River House Arts Space) is currently based in the gorgeous River House Arts Gallery in downtown Toledo. Hush.ex features the work of four artists whose common thread begins with the historically and regionally loaded medium of glass. 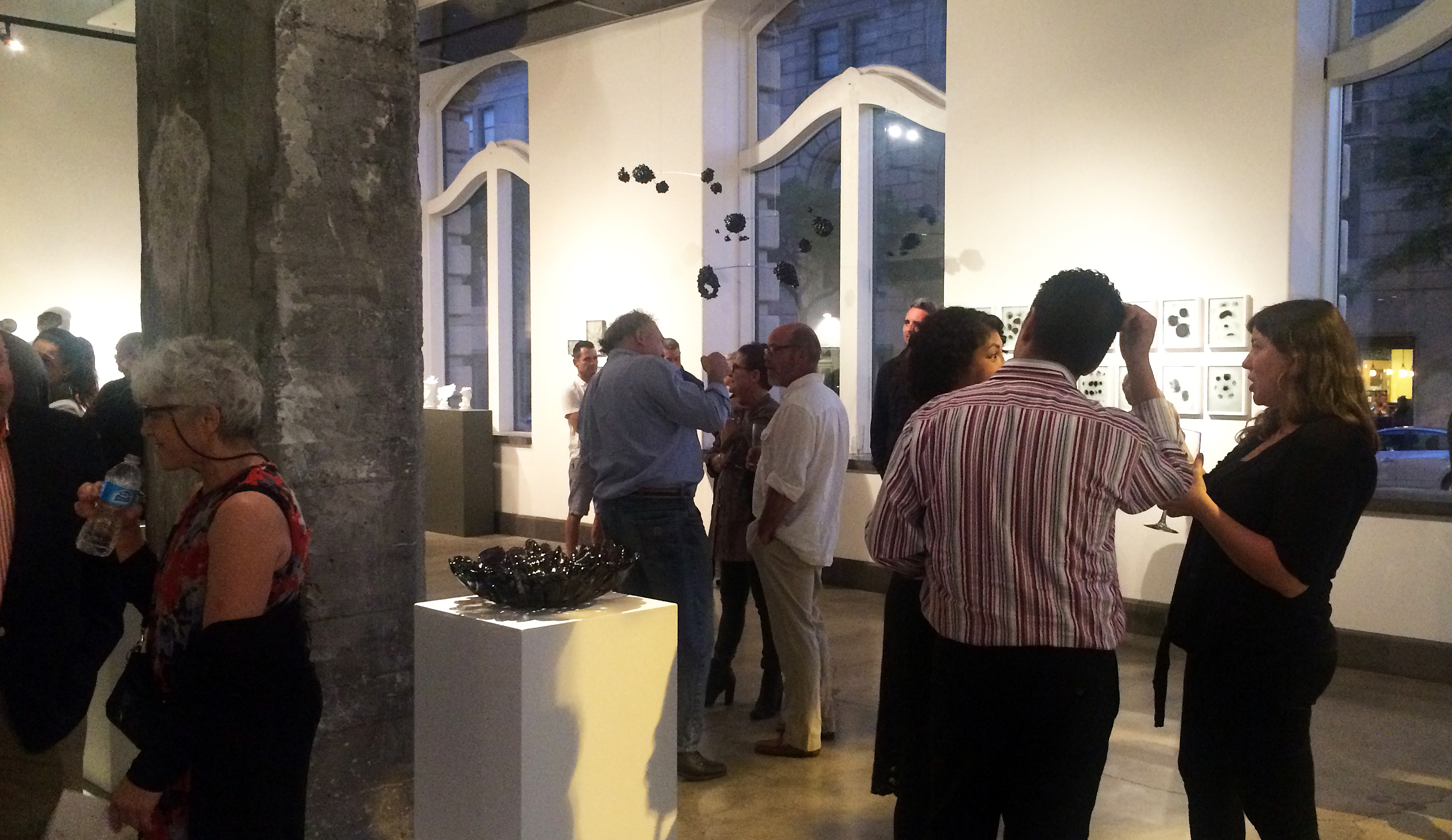 Once upon a time, glass production was a massive industry in Toledo. Its status as a serious craft has passed out of our cultural consciousness, much as other craft-oriented industries that once anchored Midwestern economies have shifted locus or become altogether obsolete. Toledo, however, has preserved its status as “The Glass City” through a symbiotic relationship between industry, education, and fine art that has guided glass craft through industrial decline, out of factories and into studios, ultimately accumulating an incredible collection of glass art (initially through the patronage of Edward Drummond and Florence Scott Libbey, founders of both Owens Corning Glass Manufacturing and the Toledo Museum).

The artists of Hush.ex (all of whom teach in the Glass Program at Tyler School of Art, Temple University) engage with the historicity and mundanity of this medium that permeates our lives at almost every moment without making its presence felt. The work illuminates that very mundanity, and uses it to begin a dialog about the things we touch, use, and interact with daily, and how quietly loaded with history, both emotional and indexical, this slippery, medium-bridging material is.

Glass is a substance that we live with and touch frequently as part of our daily life. We open windows, handle drinking glasses and plates, navigate touchscreens. We know what glass feels like. And, if you’ve ever been a child surreptitiously handling a weighty, faceted objet de art or a precious piece of porcelain, you know that glass feels good. It’s a crafted substance that invites direct interaction in every way. It’s almost an extension of our bodies, and it’s certainly played a major role, historically, in preserving our experiences in sensuous, precious, yet powerful cartouches. The artists featured in Hush.ex tap directly into that sensuous, indexical role glass possesses (to a maddening degree- I’ve never felt a stronger desire to touch works of art in an exhibition).

Amber Cowan’s turgid glass sculptures channel both mid-century gewgaws and the horror vacui principle of nature to craft strangely familiar, subversively scaled vessels and wall pieces that burst with an uncanny appropriation of organic growth and mind-numbing decorative beauty. Her works bear such titles as “Wedding Compote with Thorny Vine,” and “Candle Stick.” 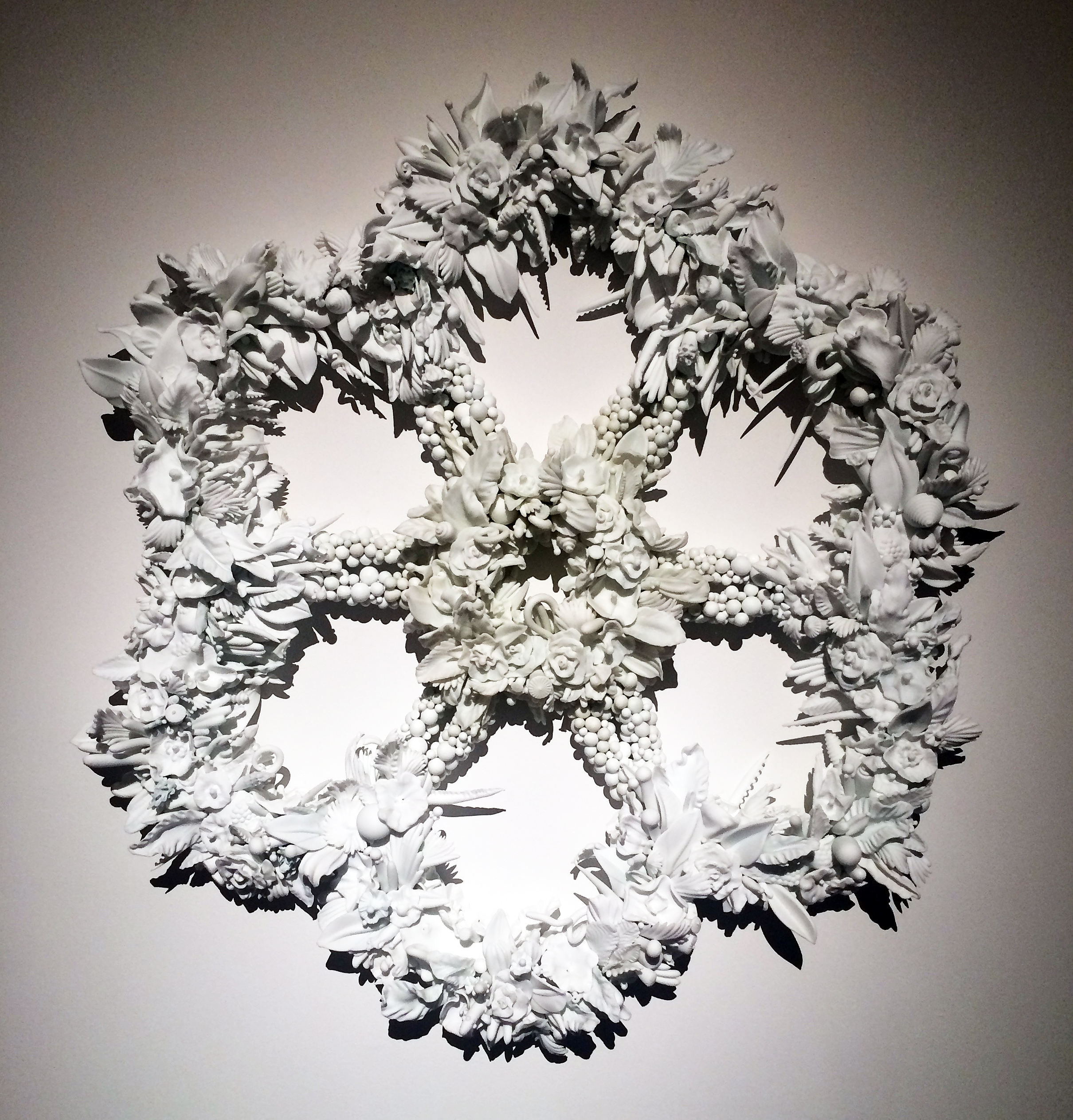 The works of Jessica Jane Julius dialog with mundane objects of a very different order- the ephemeral static and digital flickerings that glass bears into our environment via television and smartphone screens. The buzzy surfaces and odd static/dynamic quality of her installations speak to the mercurial loyalties of glass, as an almost magical medium between our reality and pure, abstracted information. 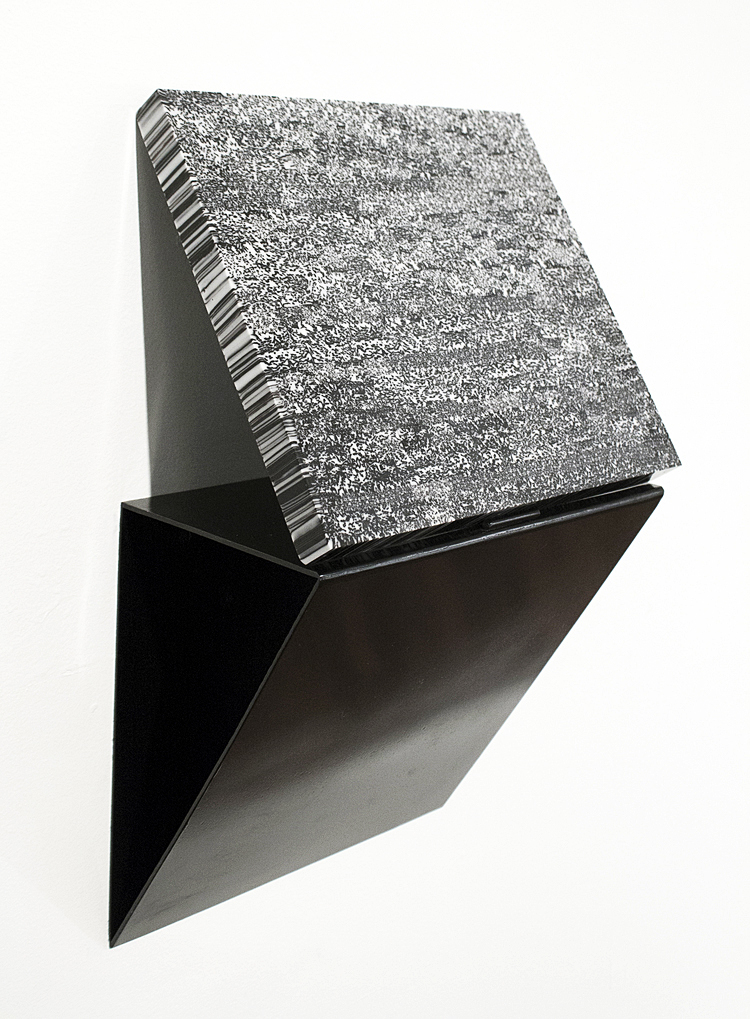 The theme of glass as a vessel for memory brought uncannily into real space is most directly engaged by Sharyn O’Mara, whose pressed glass burnout drawings most directly reference Nineteenth Century memento mori keepsakes. Such objects were meant to preserve a physical trace of a deceased loved one available for viewing through impenetrable glass. Through an intense process of compressing objects between panes of glass and firing them into carbonized fossils, O’Amara has preserved, among other keepsakes, tufts of hair from beloved dogs that caramelize in their pressed glass coffins into delicate, snowflake-like strata of tangled tendrils that reference lovely, closely observed charcoal drawings. 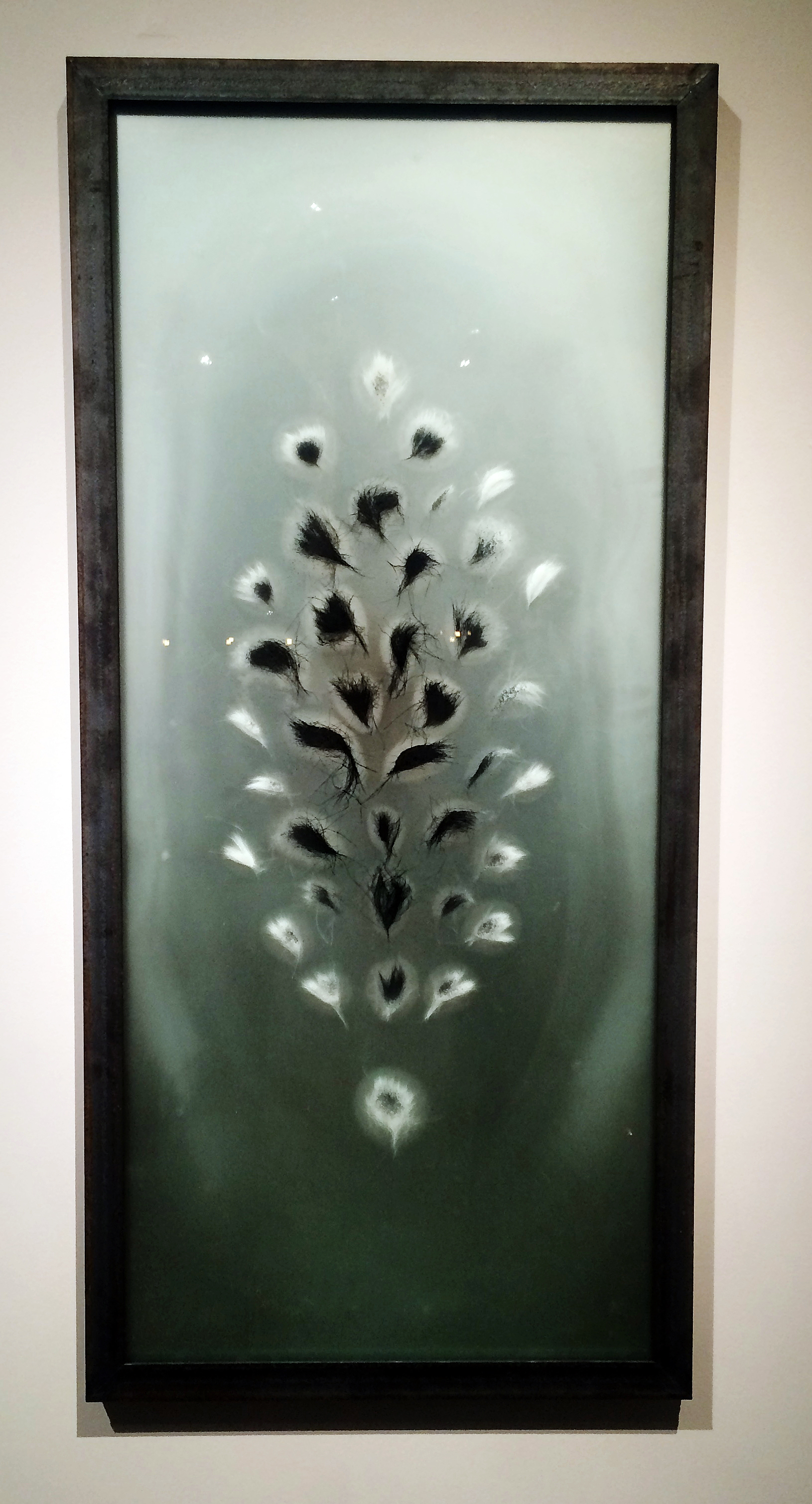 Megan Biddle’s sculptures also invoke drawing, taken off the wall into three dimensional collisions of line and material. Again, there is a reference to preservation and enclosure here- her home appliance scaled sculpture “Converge” occupies a corner of the gallery like an old-timey television set, transmitting a quiet meditation on converging, geometric lines rather than moving bites of information.

The overarching theme of preservation of historical, beloved objects and memories within this medium that feels simultaneously earthy and ephemeral, tactile and fragile, inviting and forbidding to touch. 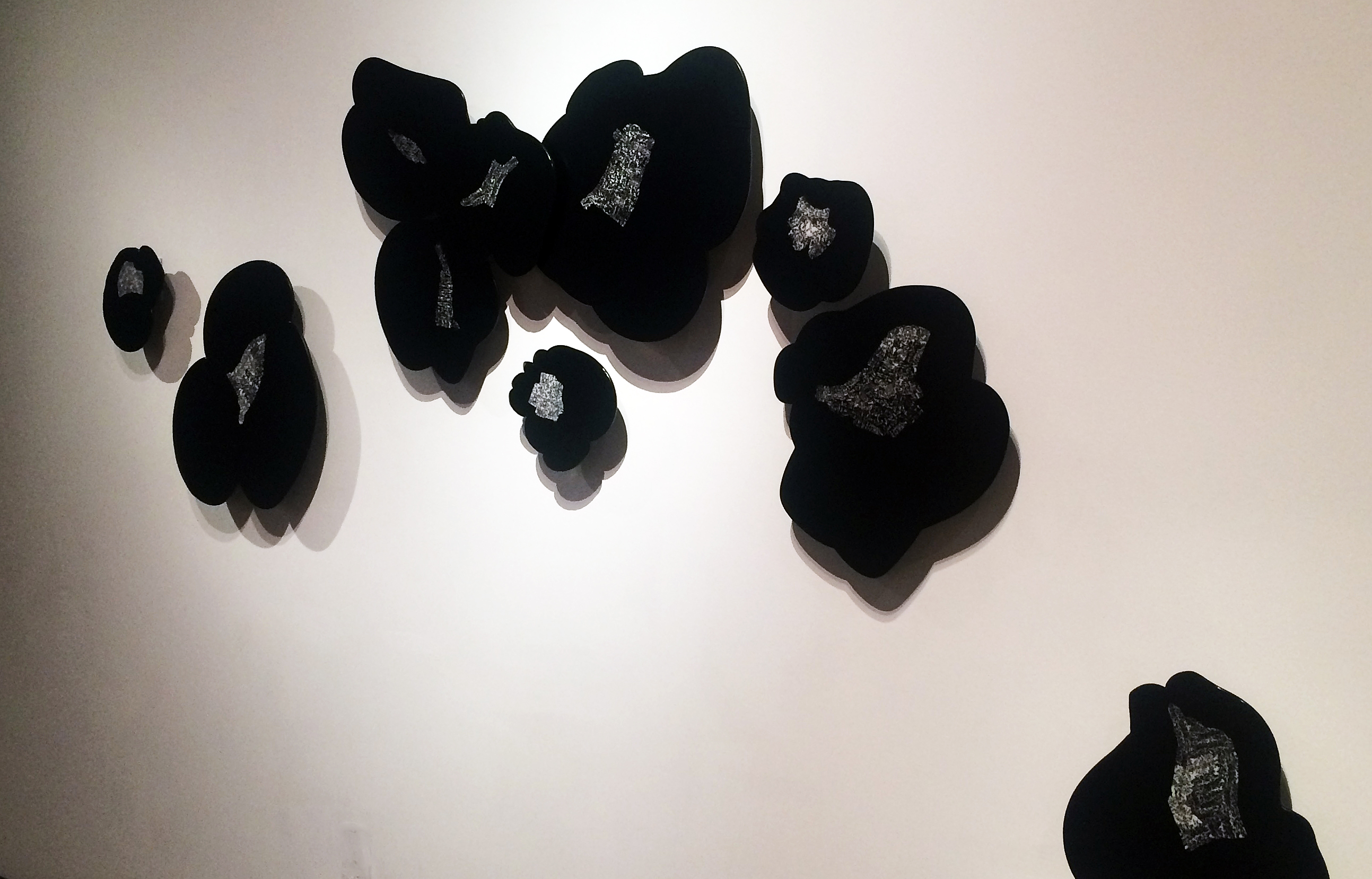 Hush.ex coalesces into an incredible synesthesia of memory, digital ephemera, and physical preservation all encompassed, like Snow White, in a sensual and impenetrable glass coffin. There’s much potential for touchstones of communication in this medium that feels simultaneously earthy and ephemeral, tactile and fragile, inviting and forbidding to touch.

It’s the rare medium that straddles craft, fine art, and daily life on such equal footing. Hush.ex both awakens the viewer to sensual beauty, and stands as a reminder that such beauty is all around, within grasp, at all times.