The Library Street Collective opened an exhibition, Pain Management, by Detroit-based artist Beverly Fishman, December 10, 2016. The installation consists of seven pieces that continue a theme Fishman has been exploring for several years: pharmaceutical products. Having read the press release, one would think they’re reading a pharmaceutical briefing from Pfizer, Merck or AstraZeneca.

Perhaps the artist describes her work regarding pills, tablets, and Big Pharma, but this work stands on its own in terms of the abstraction of form, shape, and color. The first comparison that comes to mind is the work of Frank Stella from the 1970s, who studied the work of Josef Albers and Hans Hofmann. He went on to developed a large number of geometric-shaped canvases that use a taped, hard edge to separate his bright colors. In Fishman’s work, these high-gloss painted wood objects go much further in demonstrating a sophisticated level of craft and, in doing so, take the abstraction to a new level. She uses hue and texture to create an illusion that gives way to dimension. Fishman’s “more than paintings” have a unique edge that reminds the viewer of how serious she is about creating a beautiful object. 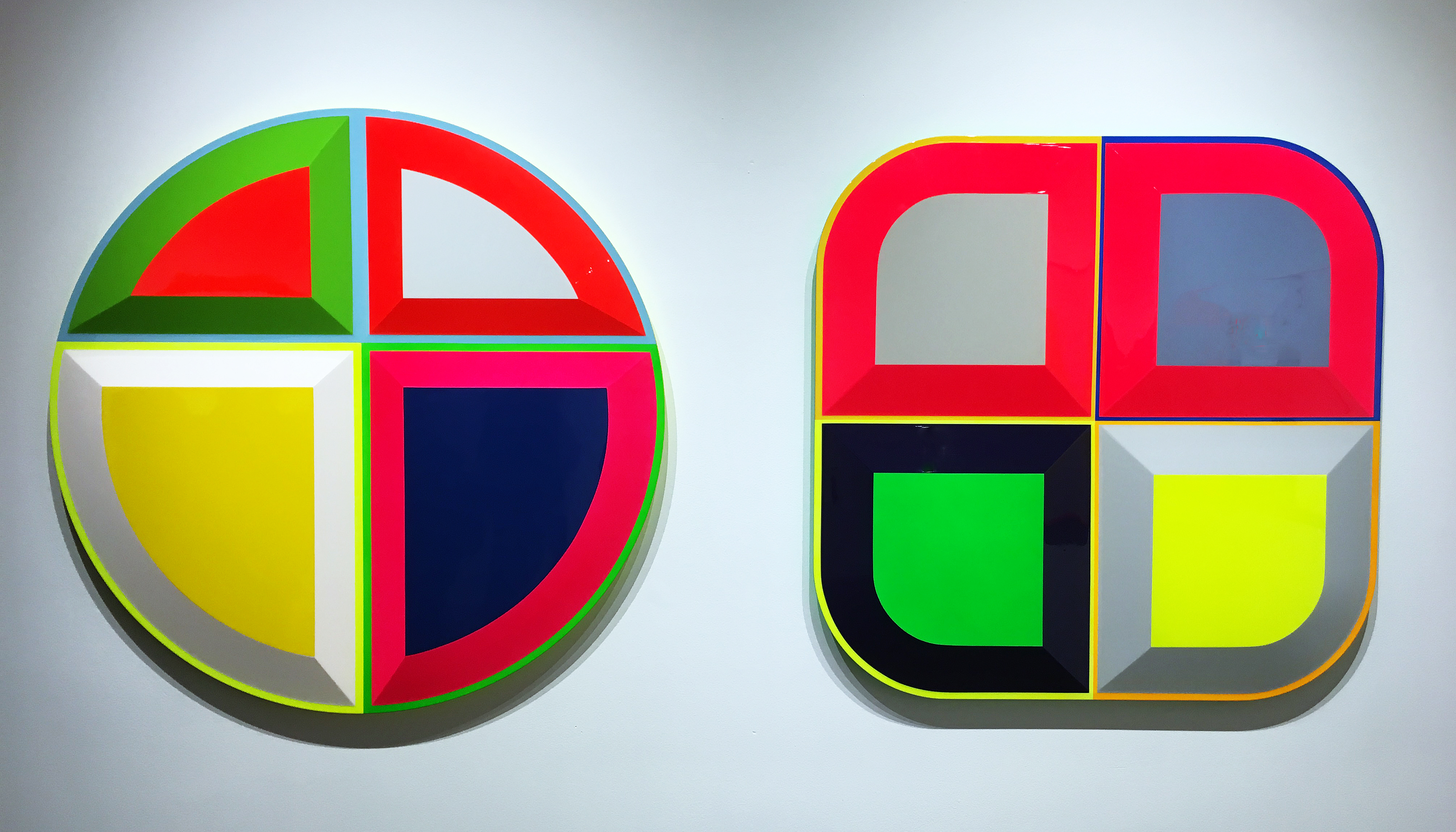 Educated at the Philadelphia College of Art and Yale University, Fishman is now Artist-in-Residence and head of painting at Cranbrook Academy of Art. My guess is that her artistic sensibility was formed in a time when abstract expressionism and color field painting was at its height. Josef Albers, the German artist who fled Europe, was part of the Constructivist and Bauhaus movements and was part of what brought this hard edge into abstraction in the United States. While at Yale as Head of Design in 1963, Albers published Interaction of Color, which laid down and articulated his theory on how colors were governed by internal and deceptive logic, as illustrated in his 1965 Homage to the Square.

In earlier work, Fishman made large-scale pills and tablets as art objects, highly fabricated using glass and displayed in groups on the floor. While her exhibition Pill Spill at the Detroit Institute of Arts in 2014 gave audiences something to think about, this writer is not interested in what drives her imagery. Moreover, the design and execution itself as an art object seems paramount. This new work hangs on the wall and dazzles the viewer with its high technological approach to creating a brightly colored surface where primary and secondary colors are juxtaposed, including thin strips of opposing color at the edges.

She says in an excerpt from the David Richard Gallery website, “In each of these works … I treat the museum or gallery space as a living organism by releasing pharmaceuticals into the institution’s interior,” Fishman wrote. “The capsule serves both as an icon and as a vehicle for abstraction, through which changing color and pattern combinations unfold. Critics have compared my work to both post-Pop Art and Minimalist styles. I do engage directly with the legacies of these movements, but I pursue an aesthetic that combines abstract form with social and political critique.”

Fishman’s new work engages the viewer with these painted wood objects using a process commonly associated with industrial fabrication. The work is more like a Gran Turismo Maserati than a KIA sedan. She uses coated aluminum, wood, polished stainless steel, cast resin, phosphorescent pigment, and urethane paint, to punch through and establish an abstract idea. This is the strength of her new work, more the artist, and painter in a modern time. Is there a physician’s prescription required to purchase the work: I think not.

There are few artists, if any, working out of the Detroit area with a biography comparable to Beverly Fishman. She was consider for the Kresge Eminent Artist in 2008, a Guggenheim fellow, a NEA fellow, visiting artist-in-residence in over 30 locations around the world, and the list goes on…see, Beverly Fishman

Pain Management, runs from December 10 through January 28, 2017 at LSC