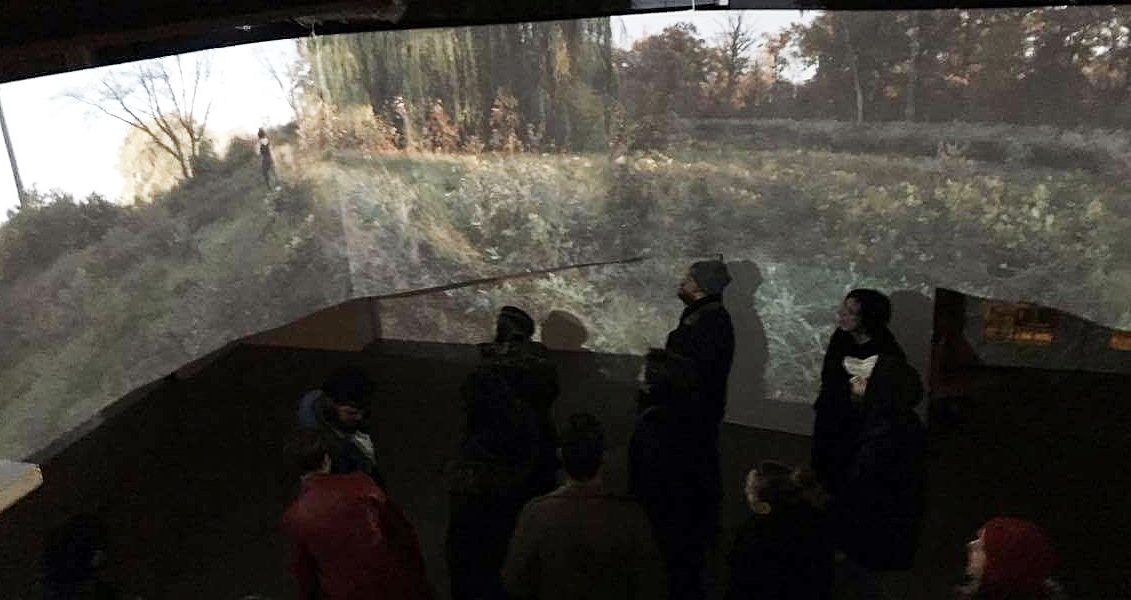 All Images courtesy of Oren Goldenberg and Scott Tallenger

At the outset of Untitled Experiment of the Modern Gaze, a film collaboration by Oren Goldenberg and Biba Bell, a camera-in-the-round, moving across several large screens mounted in a ring, surveys a patch of woodsy, Rococo landscape (brought just barely into contemporary times by glimpses of electric wires and smokestacks on the horizon- otherwise, the golden twilight and delicate, sparsely leafed trees could have been painted by Watteau.)

Whoso list to hunt, I know where is an hind.

The roving eye of the viewer (I can’t help but signify the viewer as “he”) moves first at a leisurely pace, taking in the magically lit landscape. A dark void follows his gaze around, blotting out, for us, what the viewer is not looking at. A figure materializes from the trees- the powerful form of acclaimed dancer and choreographer Biba Bell.

The vain travail hath wearied me so sore,

I am of them that farthest cometh behind.

She moves in this strange, wild clearing with natural grace, as if she belongs there. She approaches the viewer like a wary fawn. The viewer’s gaze swings toward, then away from her in a rhythm that visualizes the meter of a sonnet, with its round, half-stepping rhymes.

But may I by no means my wearied mind

Draw from the deer, but as she fleeith afore

Sithens in a net I seek to hold the wind.

Untitled Experiment of the Modern Gaze can read, at first, as fairly unexperimental, aside from its installation, coiling around the gallery on screens installed in a huge ring. The scene it captures could be presenting the figure, a woman, as an allegory of nature, as a delicate, wild creature, not quite autonomous, a Pre Raphaelite sylph. The gaze, at first viewing, feels male in its invisibility and its meandering power, turning first toward, then away from, the woman as she floats upon, and interacts with, the landscape. What disrupts this is the woman approaching the camera and returning its gaze in an act that suddenly establishes her as autonomous from her surroundings. The camera, seemingly put off by this direct appraisal, begins to turn more quickly, it’s black void following it, engulfing more and more of the scene. The sonnet winds in toward its break. 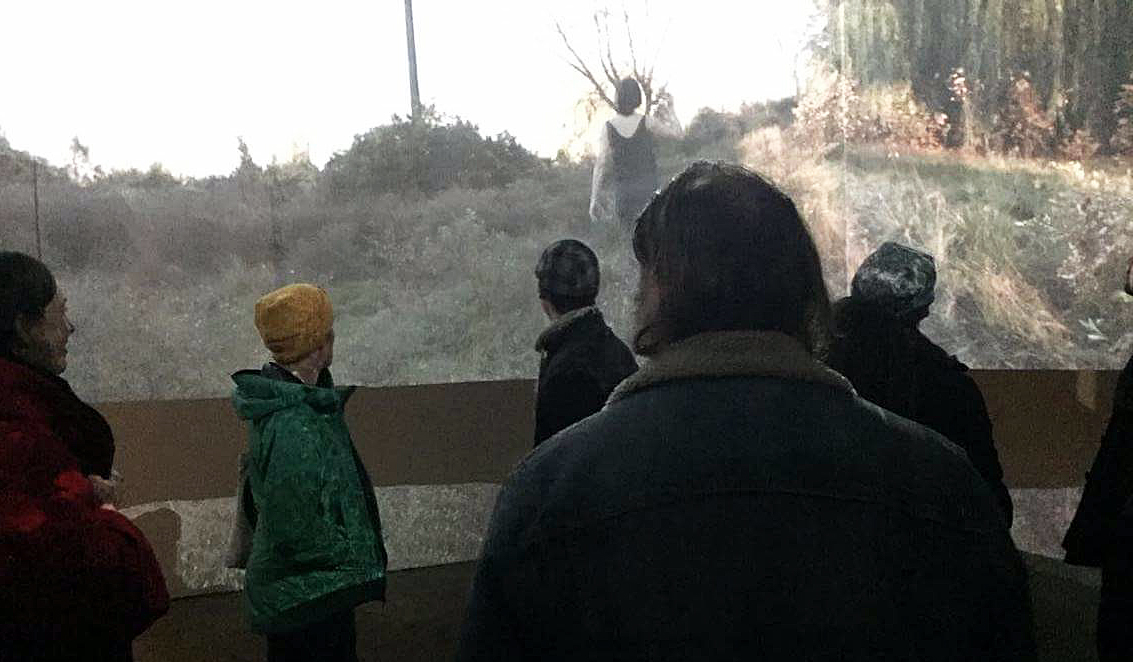 Who list her hunt, I put him out of doubt,

As well as I may spend his time in vain.

And graven with diamonds in letters plain

There is written, her fair neck roundabout:

Noli me tangere, for Caesar’s I am,

And wild for to hold, though I seem tame.

The allegories of nature and the hunt are inverted as the woman begins to pursue the camera’s gaze, chasing it as it turns faster and faster in apparent confusion. She halts it (the final couplet) and, applying physical strength to the dark voids that surround the gazer’s view, pushes them out of sight, unfurling the full majesty of the landscape, now seen in full circle. In a modern update of Wyatt’s poem, the woman is, indeed, wild for to hold, but she belongs to no one but herself. Once she has halted the camera, she turns and saunters back into the woods.

Untitled Experiment of the Modern Gaze is on view at Popp’s Packing until December 17. An artist talk with Oren Goldenberg and Biba Bell will be held at the gallery Wednesday, December 14, at 7 pm.