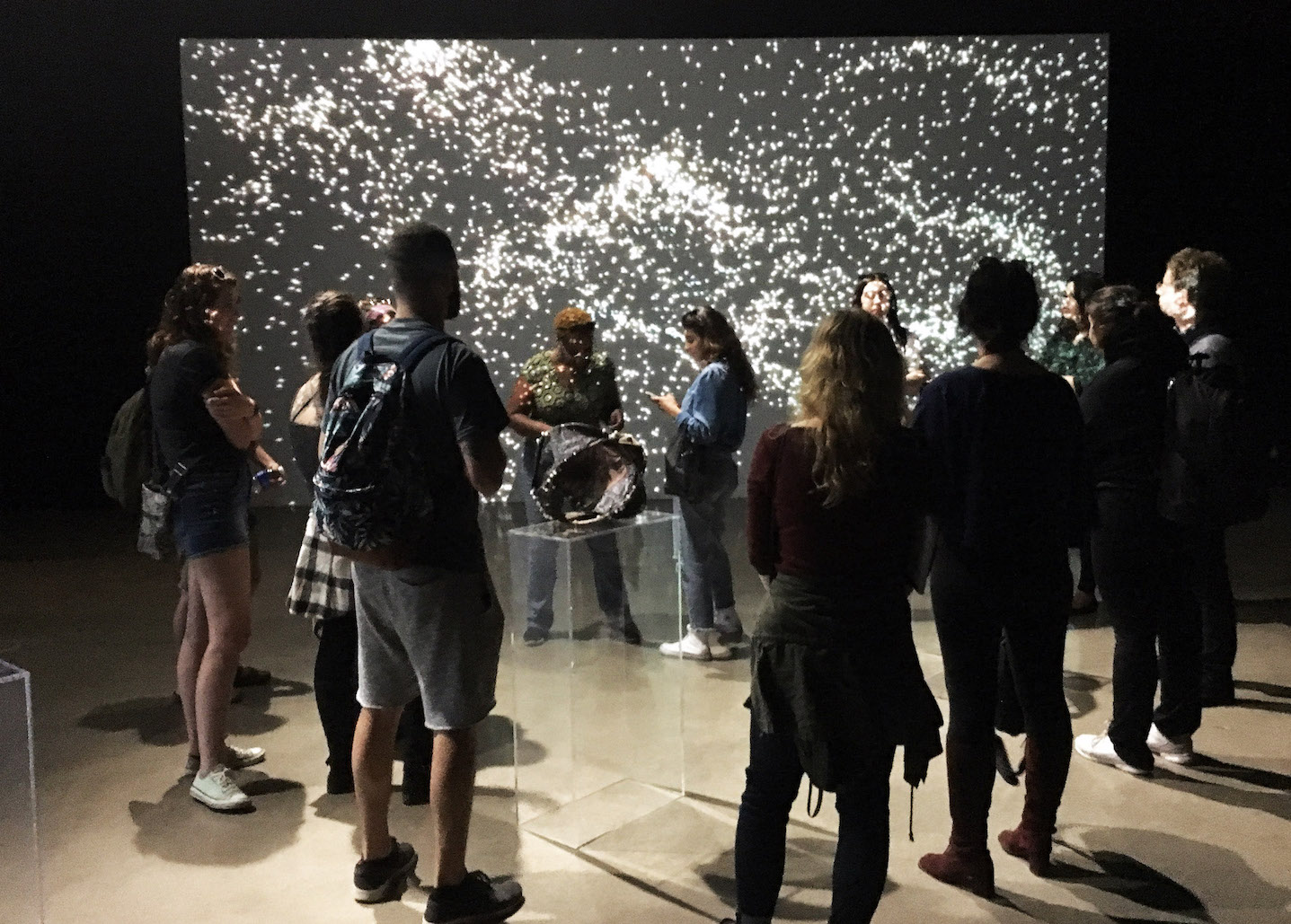 The Detroit-based multimedia artist, Cooper Holoweski has a solo exhibition of work that opened at the CCS Center Galleries September 15, 2017. Curated by the director of the galleries, Michelle Perron, the exhibition is comprised of two large projected video loops that include an audio track and three sculptures that Holoweski made in collaboration with his three-year-old son, Cassius Oak. The exhibition space is painted entirely black to contrast with the two – wall to ceiling – video images, Cannibal Universe, and Food, Clothing, Shelter. These video loops of images contrast, as one seems to focus on the universe’s celestial night sky with a large variety of imagery and the other illustrates a short series of images from materials that are part of our experience in the natural environment.

Holoweski says in his statement, “One thing that tends to bind my work is a quality of “tension” or “contradiction.” In the past, I have used digital 3D modeling to create piles of virtual garbage. The idea being that 3D modeling is typically used for prototyping new objects; so the medium represents the beginning of a life cycle, while the junkyard represents the end. With the work in Basement Cosmos and my piece in Dlectricity I’m taking on some grandiose subject matter (the creation of the universe, the origin of consciousness, the infinite and the unseen), things that many, including myself, hold quite sacred. With some exceptions, I’ve generally used very banal materials and processes to depict these things. For me, this counterbalances the grandiosity of the subject matter, makes the work more inviting (and sometimes humorous even), and creates a bit of that tension by coupling the sacred with the every day.” 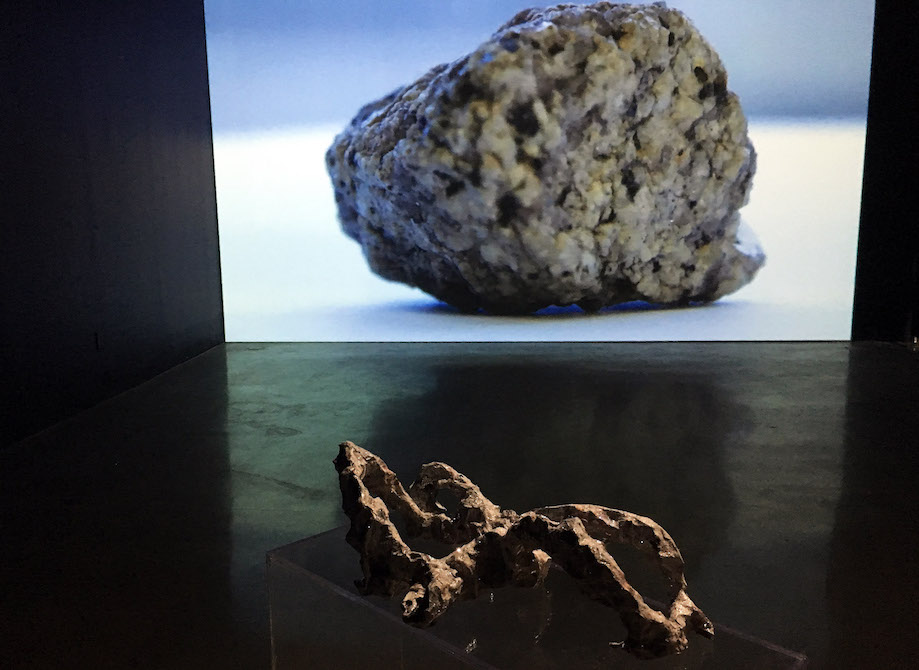 It was just recently upon my visit to the Venice Biennale 2017 that I experienced video artwork that was an integral part of many countries exhibitions. I mention this because the popularity of video as an art medium seems to grow each year and it is within this context that I energetically viewed the Basement Cosmos installation. Tracing its origins to the birth of video art in the 1970s, it has increased in popularity as production technology has become more readily accessible. Today, video installation is ubiquitous and visible in a range of environments—from galleries and museums to an expanded field that includes site-specific work in urban or industrial landscapes. The only requirements are equipment, electricity, and darkness (for projection). It would be a guess, but the video work on display in this exhibition could have been originated in one’s basement and then projected on a large wall that amplifies the scale. Having a traditional art practice myself, all of this has forced me to better understand video artwork as a fine art, and where fits into the universe of visual art. The best I can do is to perceive video pieces much in the same way I see performance art: a fleeting experience, like a ballet or a stage play (that can be re-performed) for an audience, but not purchased to be placed in a domestic living room, but yes, part of a museum collection. One may think of video screens as a new type of canvas with moving images. 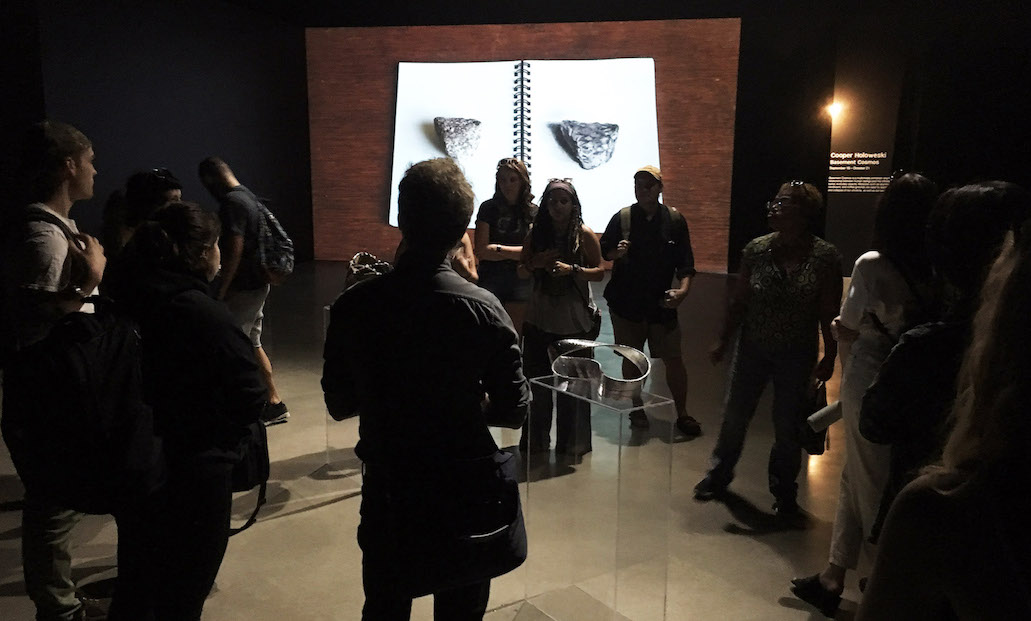 If you have a passing acquaintance with video art, you’re probably familiar with The Clock (2010), by Christian Marclay, which is perhaps the most hyped art video during that period. The premise was deceptively simple: it ran for 24 hours and was a mash-up of movie scenes featuring either a clock face or a reference to the time that was synonymous with the actual time. Other video installation artists include Pipilotti Rist, Cory Archangel, Hannah Black, and Ryan Trecartin. Some of these artists have a narrative; others are purely visual in their use of video imagery.

This review comes on the heels of an exhibition at Oakland University Art Gallery, where I mention the role of a university exhibition space, and now at CCS where they can pursue new ideas without a concern for commerce: a much-needed function in the Detroit Art Community, and acknowledgement of those curators who take full advantage of this position.

The exhibition Basement Cosmos includes three sculptures: Mobius Strip, Cala-bi-Yau Manifold, and Ouroboros Ghost Worm Eating its Own Butt and represents a form of eternal cyclicality. It is not clear how these works fit into the video displays of work and seem like somewhat of an after thought or perhaps humorous relief. Cooper Holoweski earned a B.F.A from the University of Michigan and an M.F.A from the Rhode Island School of Design. He lives and works in the Detroit area and participated in this year’s Delectrity 2017.