It seems fitting to mention that abstraction has been with us since the Russian artist Wassily Kandinsky migrated his landscape to a purely abstract form on canvas sometime in late 1910. I always make the comparison to music, since instrumental music is abstract by nature—it does not try to represent the exterior world, but expresses in an immediate way the artist’s inner feelings, from Mozart to John Cage.

The David Klein Gallery opened the Matthew Hawtin exhibit September 9, 2017, with pure minimalist abstract objects executing perfected forms and pristine surface qualities. These shaped canvases rendered in primary/secondary colors, could not be executed more flawlessly. Some are on “torqued canvas,” others on fiberglass panels, all accompanied by a variety of exquisite surfaces. The copiousness of Hawtin’s invention, and his conception seem to allow him to explore each and every multiplicity of these ideas uniquely. 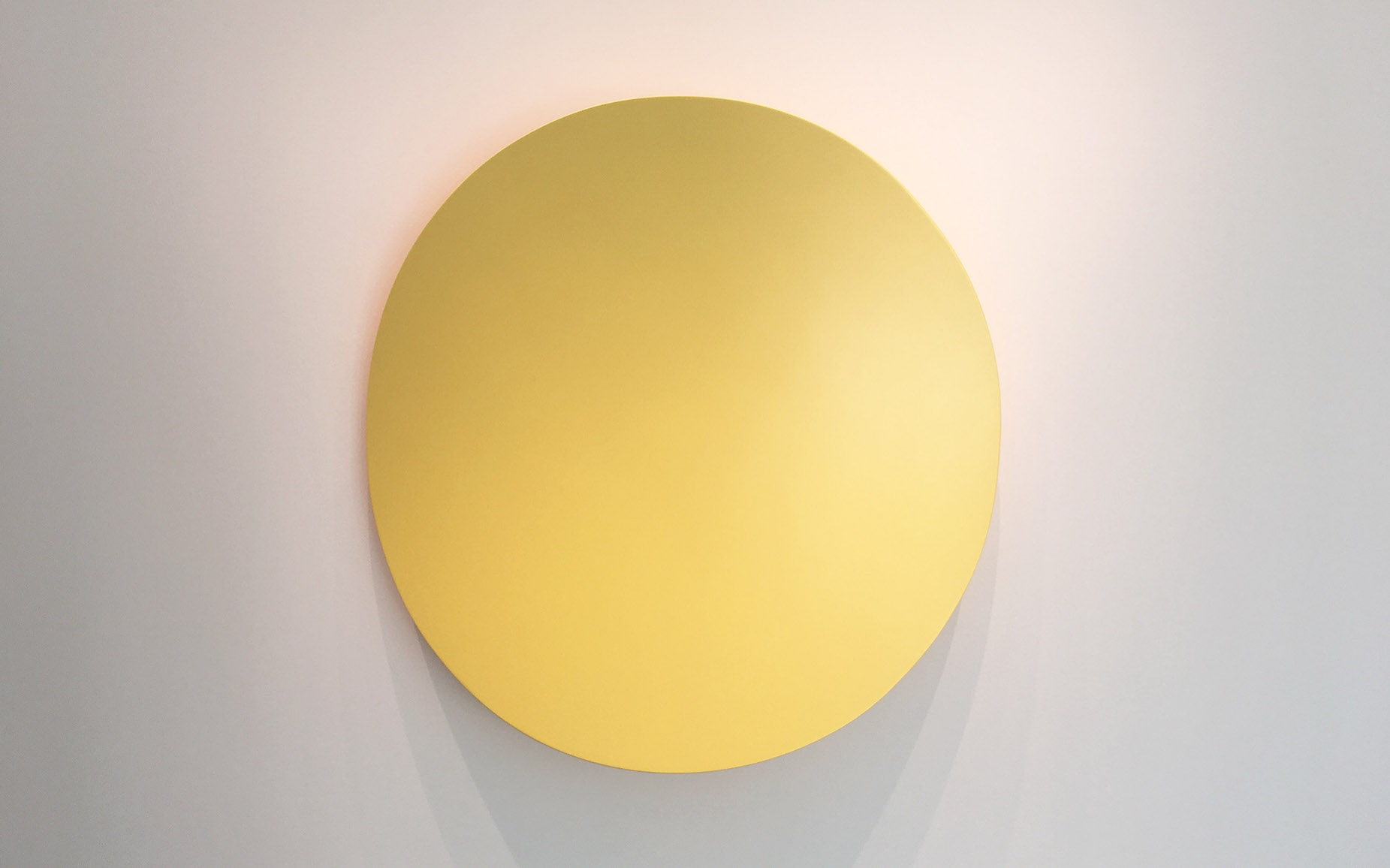 Hawtin says, “Although each series has its own technical demands, they all live in aesthetic parallel that blurs the line between artistic disciplines. There is a determination to continually push the work forward through aesthetic variations, technical refinements and experimenting with new materials. Within this forward trajectory, there is an overall vision to create art that is ‘other-worldly’ and in a sense, futuristic.” 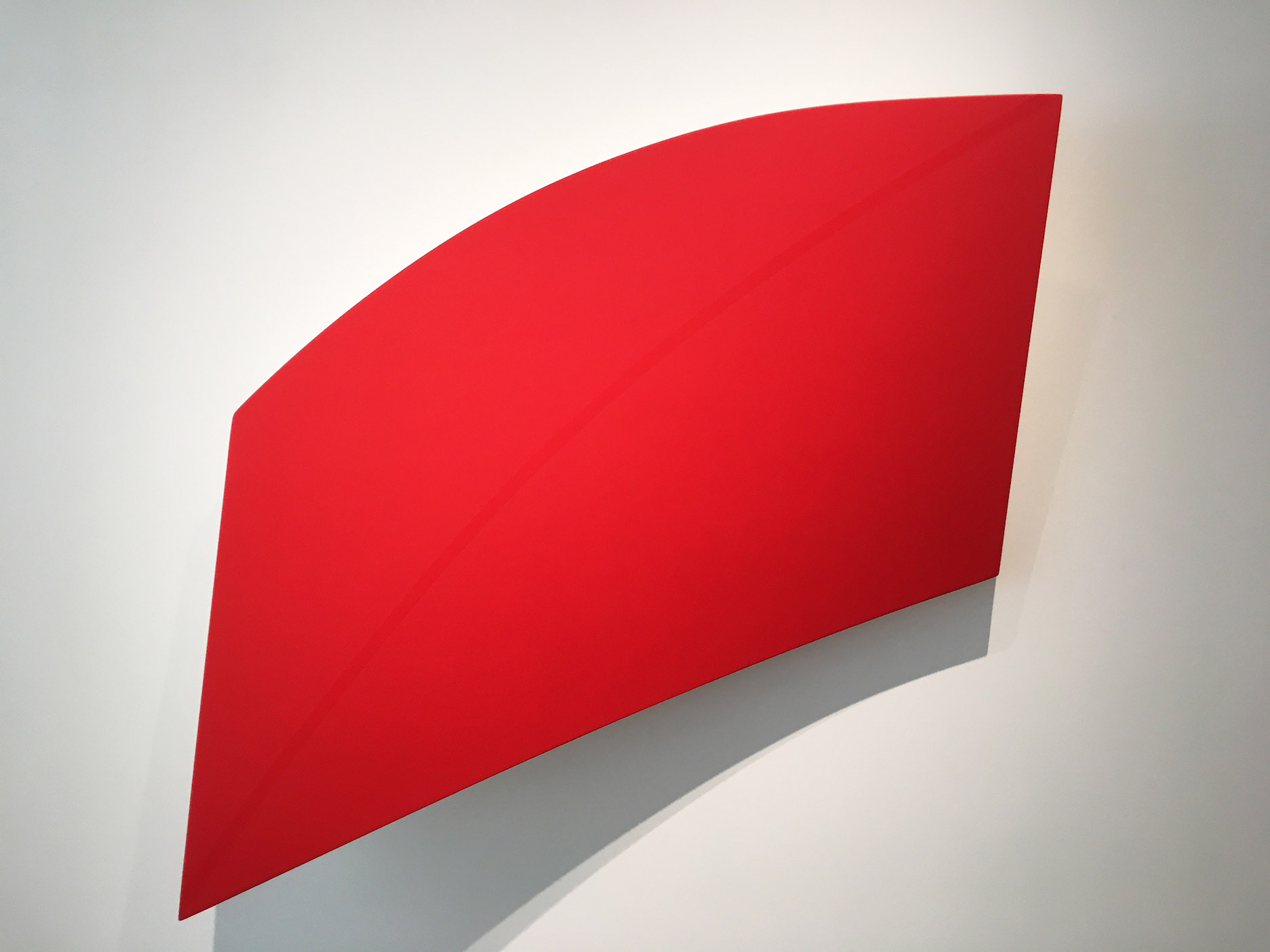 The basic context for Hawtin is the color minimalist from the 1970s, including Ellsworth Kelly, Frank Stella, Kenneth Nolan, and Anne Truitt. The secondary would be the shaped canvas artist, revisited recently in an exhibition by Luxembourg & Dayan in New York, with artists like Lynda Benglis, Elizatheth Murray, and Charles Hinman. Hawtin’s work is a hybrid of these two concepts that fights hard against representational artwork and abstract expressionistic painting, with a large degree of success. The new works that fit into corners are particularly interesting and unique. These works, composed of parallelograms, diamonds, trapezoids, rhomboids, and circles, are reductively streamlined, solid in their color and simplified in their forms that, forty years later, remain robust and encompassing in an array of approaches, especially with respect to the surface material. 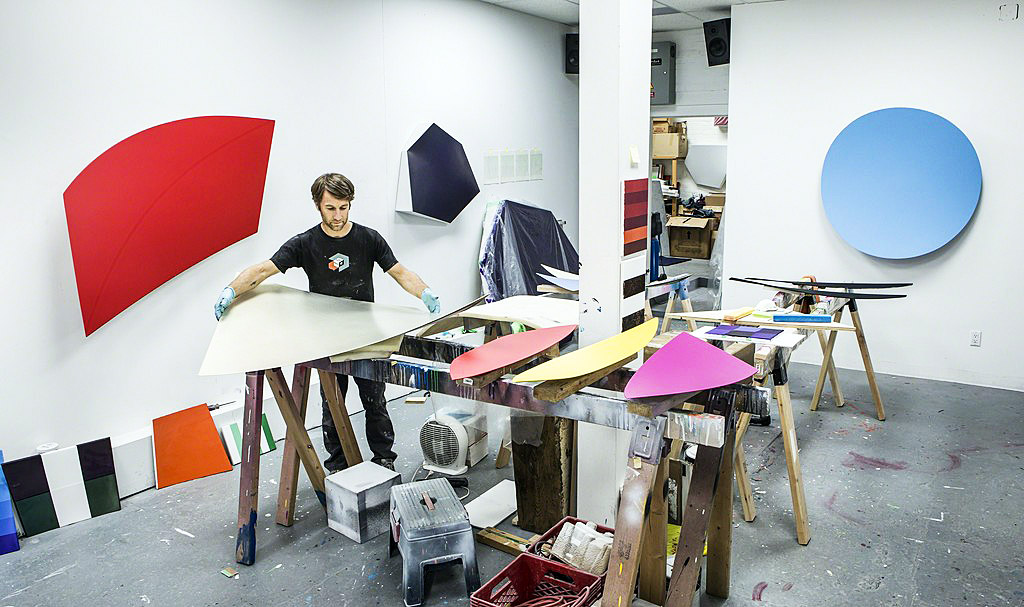 Matthew Hawtin, Working in the studio, 2017, Courtesy of Artnet

Born in England, and then moved to Windsor, Canada in 1979, Matthew Hawtin earned a bachelor of fine arts degree from York University in Toronto and an master’s in architecture from the University of East London, in London.

In the second gallery at the David Klein Gallery, the artist Bryan Graf focuses on Photograms, one of the earliest forms of photography, to create abstract tension between text and image, in a variety of scale.

Photograms are images made without a camera by placing objects directly onto the surface of a light-sensitive material, such as photographic paper, and then exposing it to light. Like drawing or painting, the process is like creating a collage without the need for scissors or glue. Rather, Graf has become highly skilled at controlling the process in the darkroom using color, shape and composition. Director of the David Klein Gallery, Christine Schefman says, “The photographs in Debris of the Days originate in a garden. It is a cultivation of ongoing works not limited to themselves, but rather a procession of generative images. Graf integrates his own gestural activity into the work by utilizing materials gathered on site as well the use of manipulations in the darkroom. His inquiry into the positive tension between text and image, as well as literary and musical influences, are evident in the arrangement of works for this show. His practice continues to reveal his interest in the history of photography and its relationship to design, painting and narrative fiction.”

The exhibitions by Matthew Hawtin and Bryan Graf run through October 21, 2017