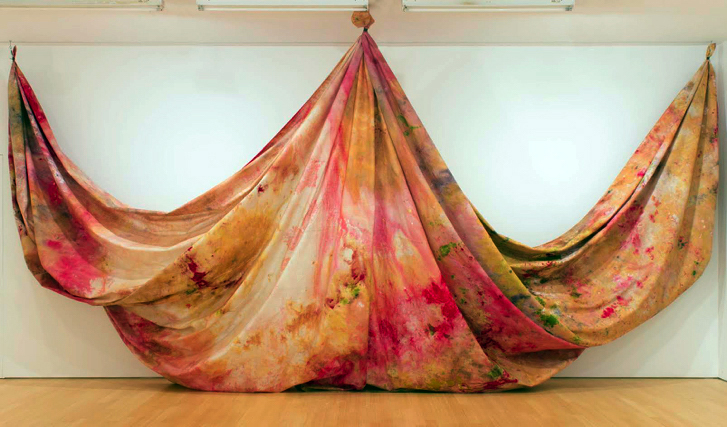 Visitors stepping out of the University of Michigan’s Taubman Gallery (currently paying host to a punchy and politically-charged exhibition of art of the African diaspora) who then wander in to the adjacent show, Abstraction, Color, and Politics in the Early 1970s,will perhaps find themselves in a gallery space austere by comparison, containing four allusive abstract paintings and sculptures.  It’s a highly conceptual micro-exhibition comprising works by Helen Frankenthaler, Al Loving, Sam Gilliam, and Louise Nevelson.  In spite of the show’s title, as political statements, their significance isn’t self-evident (something perhaps tacitly acknowledged by the interrogative opening line of the show introductory text: Can abstract art be about politics and identity?), but what the artists in this tactfully assembled ensemble have in common is their defiant refusal to conform to the art-world’s expectations of what their art should be.

Viewers first encounter a geometric abstraction by Al Loving (one of Detroit’s own, though he later lived and worked out of New York City). Influenced in the 1970s by the hard-edge color squares of Josef Albers, Loving’s Bowery Morning is a simple yet disorienting network of shapes which could be read variously as an ensemble of polygons or cubes.  Loving created the work in 1971, the same year he participated in the Whitney Museum’s highly controversial Contemporary Black Artists in America, a show which acquired notoriety when fifteen artists withdrew to protest the decisions made by the show’s mostly white curatorial staff.  But conspicuous by its absence in Loving’s work was any commentary on the social or political issues of his day. 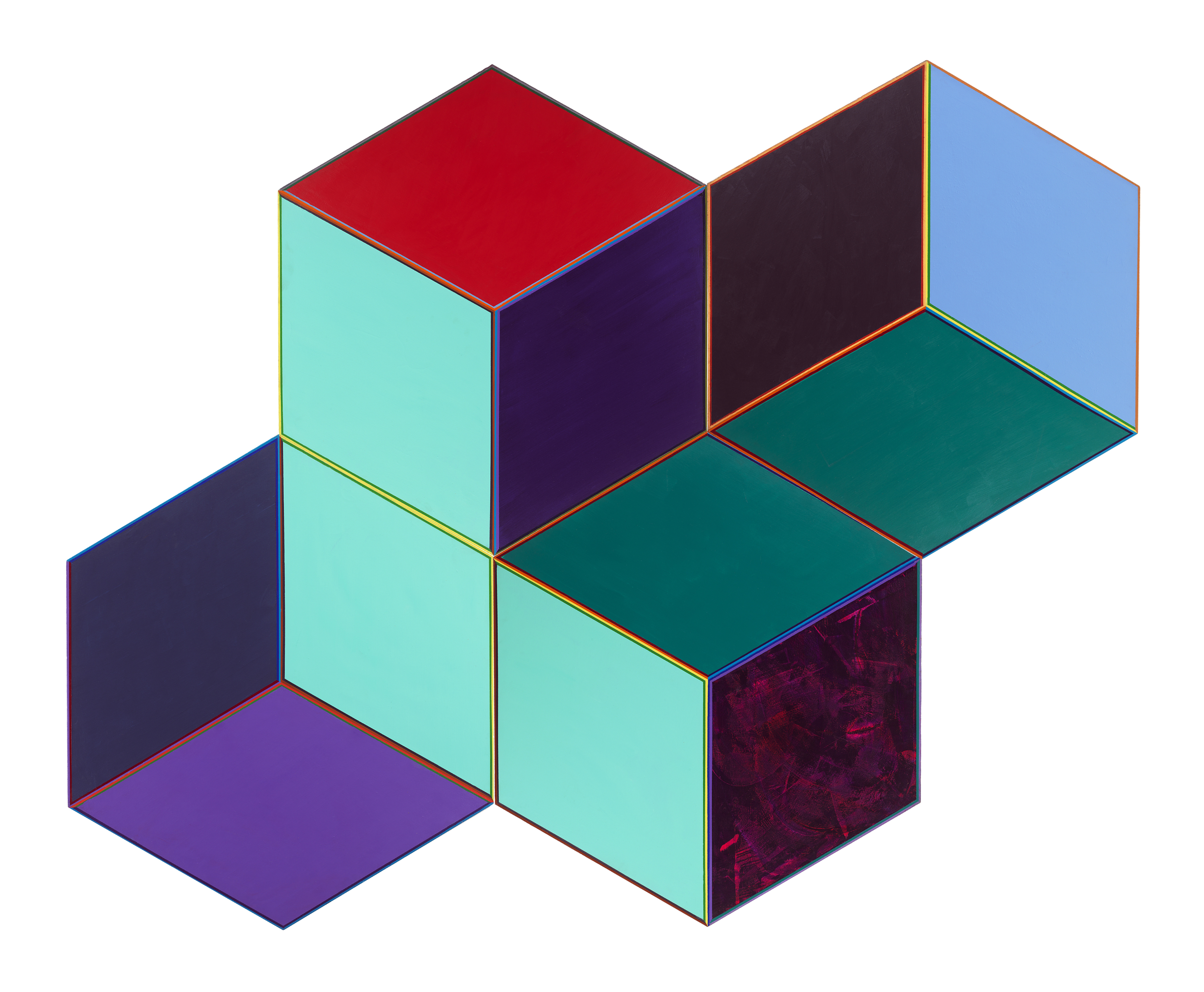 The same could be said of the work of Sam Gilliam, who in the 1970s began experimenting with abstract fabric constructions (as Al Loving himself increasingly began to do). Inspired by seeing laundry hung out to dry, Gilliam liberated his canvasses from their wooden frames, transforming his paintings into fully sculptural objects which hung elegantly from the wall like giant curtains, sails, and banners, a contribution to Abstract Expressionism that occurred long before Frank Stella began producing his own sculptural paintings which burst from the wall and crashed into the viewer’s space.  Here, Gilliam’s attention-grabbing Situation VI-Pisces 4,an abstract painting displayed like a massive banner incised with with deep drapes and folds,nearly fills an entire gallery wall with a blaze of crimsons and yellows, and it’s hard not to consider this as the show’s visual centerpiece. 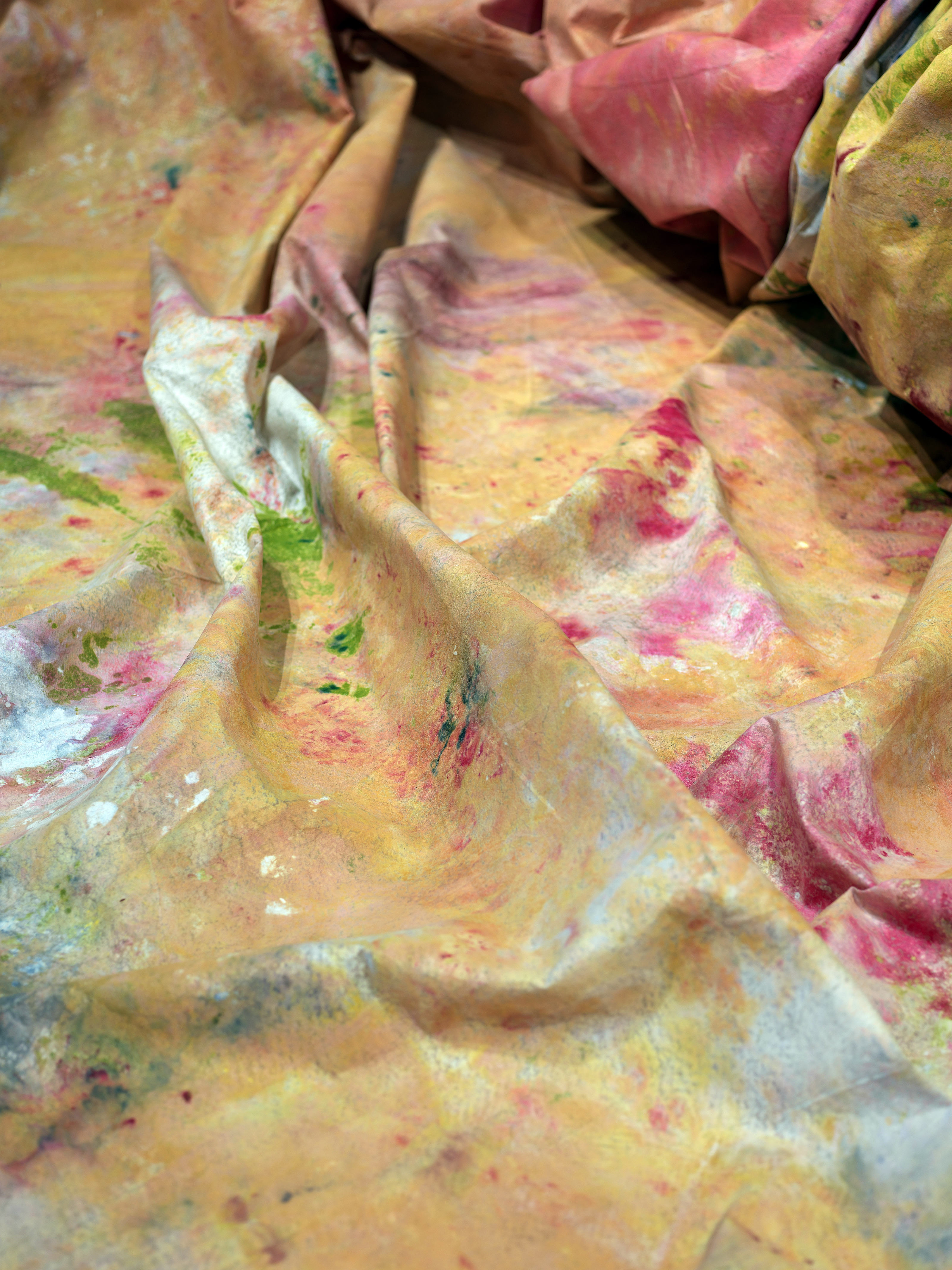 Directly across from Situation VI, Louise Nevelson’s stately and characteristically enigmatic Dark Presence seems subdued and restrained in comparison.  Dark Presence is exactly that, a mostly rectilinear scaffolding of individual wooden forms which, all painted black, coalesce into a unified whole.  A work by the second-generation Abstract Expressionist Helen Frankenthaler completes this ensemble.  Her Sunset Corner is a representative color-field painting applying her “soak-stain” method, for which she covered the canvass in nearly translucent washes of water-thin paint.

Abstraction and Politics is a challenging exhibition that certainly doesn’t patronize its patrons, and the political applications of these four works is admittedly difficult to find without the helpful explanatory text which introduces the show.  But what these diverse artists have in common is their shared refusal to adhere to expectations regarding what African-American art or Feminist-art (choose your hyphenation) ought to look like.  Nevelson’s works in particular– in part because of their imposing scale and subdued color– gleefully bucked pervading stereotypes of sculpture by women, even eliciting sexist reviews by stunned critics, incredulous that such work could be executed by a female.  The show’s theme certainly works if we view self-determination as a political act, and if we approach these artists’ defiant refusal to conform to expected narratives as a reaction against the cultural climate in which they lived, then it’s possible to view these works as an understated form of protest.  To borrow a phrase from Sylvia Plath: through their art these artists simply asserted their right to live and work on their own human terms.

University of Michigan Museum of Art   Abstraction and Politics –  Through September 29, 2019