The N’Namdi Center for Contemporary Art has a history of bringing art from various parts of the world to expand the exposure of cultural arts to the audiences of Detroit. This extensive exhibition is no exception.  Present is an under riding theme that rings true for many people, which is that in times of extreme tribulation, visual artist, musicians, actors, writers, and dancers endure hardships to tell stories.  There are two distinct exhibitions: Mitli Mitlak (Like You, Like Me) curated by Biba Sheikh, reflects the work of thirteen artists, many of whom are current residents of occupied territories throughout the Middle East; and Open Scene, the figurative expressionism by Manuel Lopez Oliva, one of the most recognized Cuban artists whose theatrical masquerades form the heart of his expression. 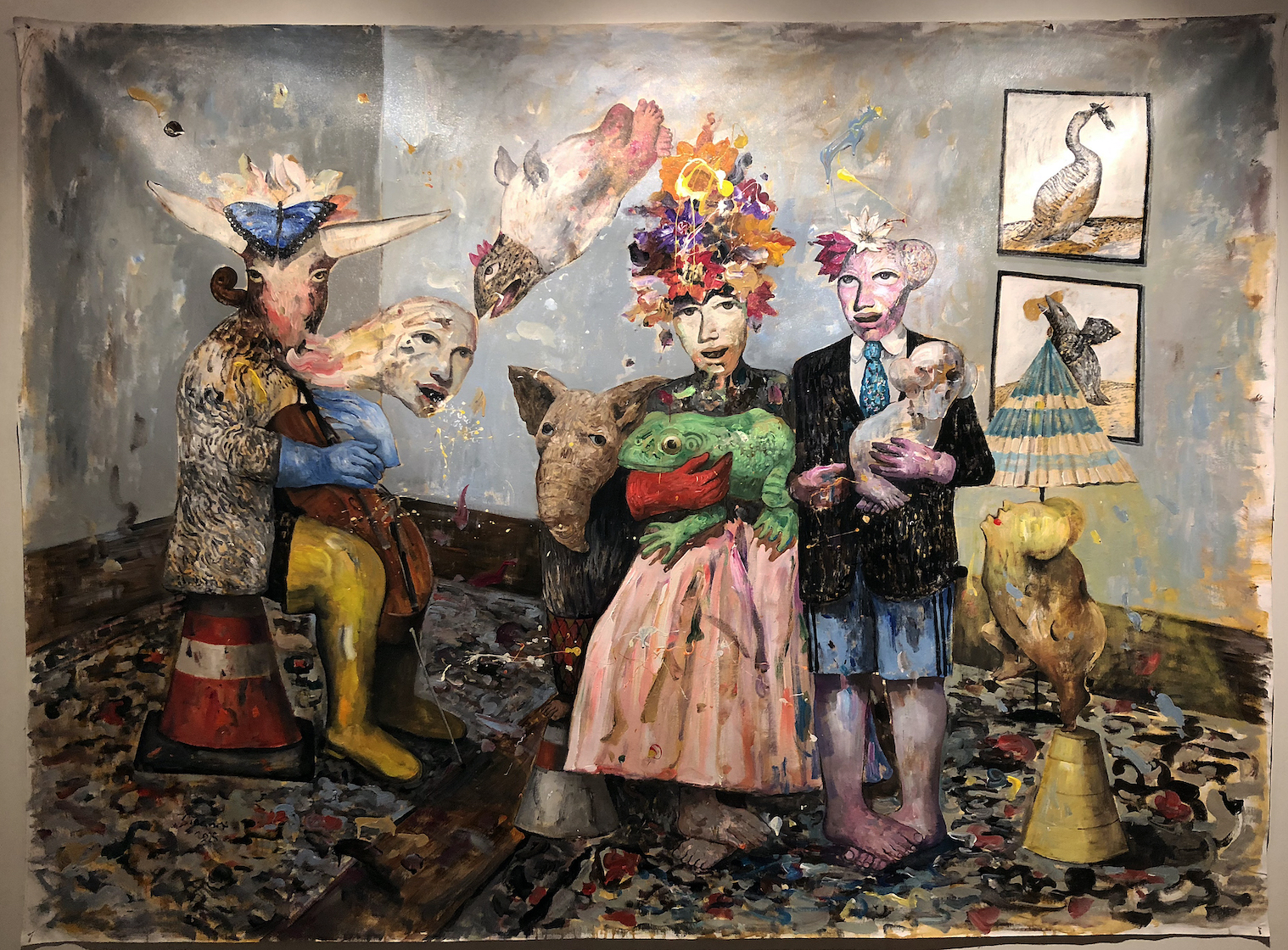 Part of the Iraqi Fine Arts Society and a member of the Union of Iraqi Artists, Sinan Hussein graduated from the University of Fine Arts in Bagdad. These large acrylic figurative paintings deliver a type of surrealism that is filled with whimsical characters, both human and animal that intrigue the viewer and pull them into his world.  The work, Just a Concert, could just as easily be titled Just a Wedding, where the setting is aglow with a couple standing side by side holding animals, some realistic, some contrived, with an observer to the left that is part human, part animal. These works by Hussein speak to the confusion in his world, where the uncertainty of life and the political and historical apparatus that surrounds him and his family are in flux. 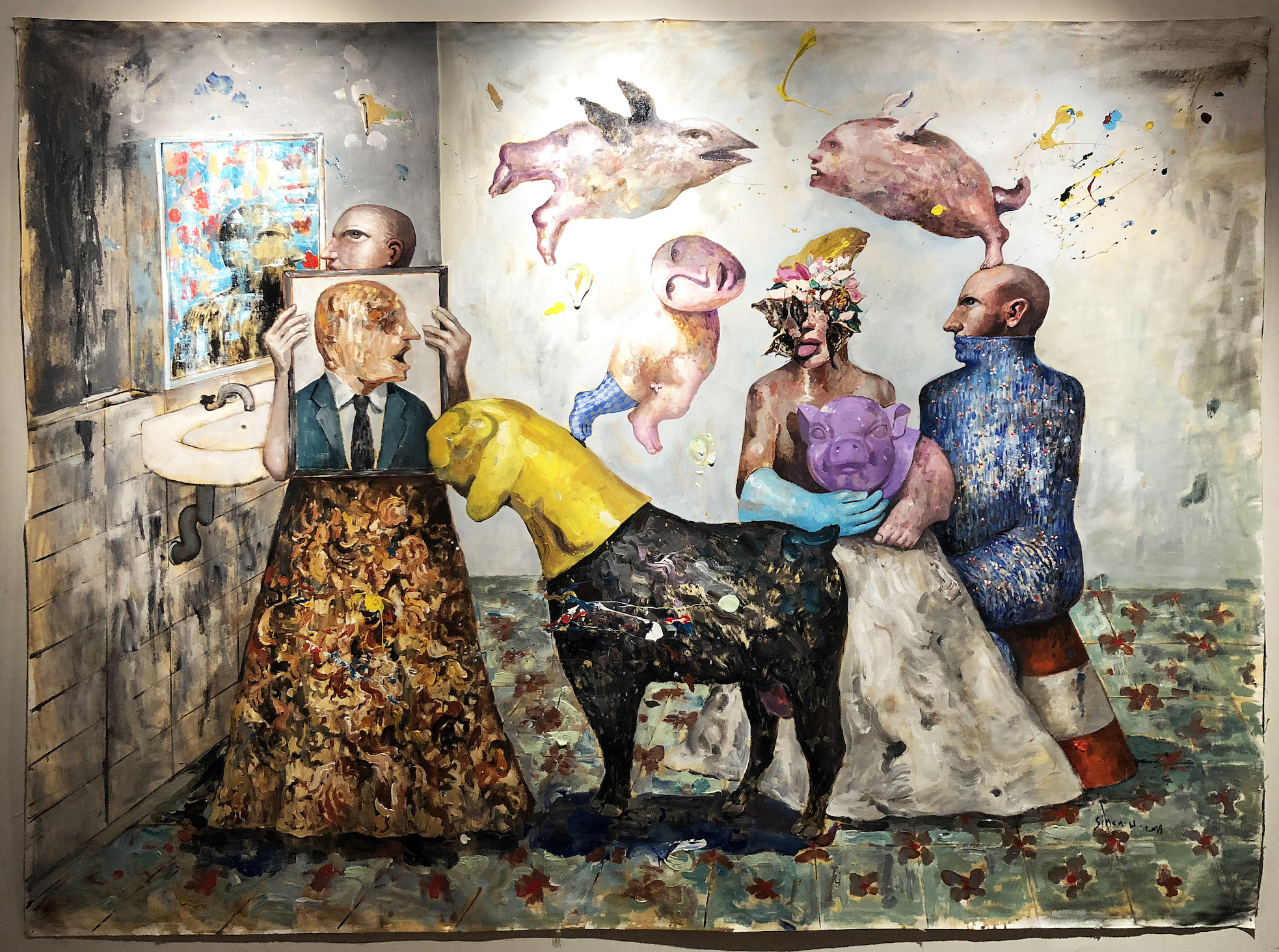 This Untitled work presents the first-person perspective of figures in a state of limbo, in the interior of what looks to be a bathroom amongst flying surreal animal-like shapes with faces and wings. There is a noted concern for composition and color surfaces with textures and colors that keep the viewer searching for meaning. Who is to say what a profound effect in the lives of humans under such dismantled circumstances of life and survival, will produce expressions of such disjointed life.

“I hope that through this exhibition and in the future of the company Mediterranean Fire, the meaning can be of westerners or non-refugees coming to the realization that these people are not much different than them,” says Biba Sheikh. “That we have much more in common and are part of the same.” 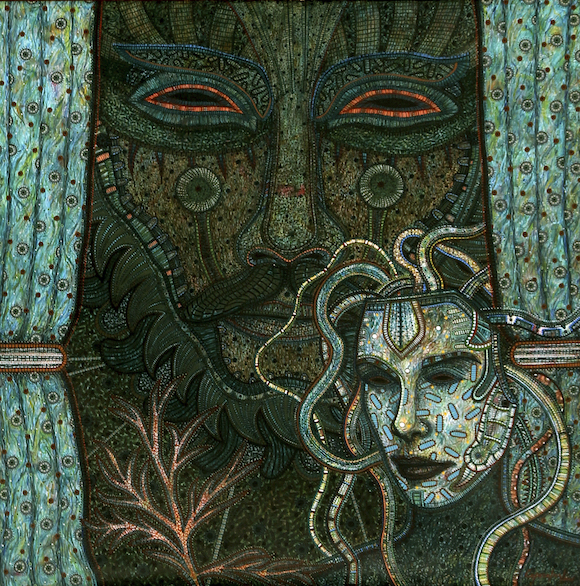 The other exhibition that compliments the extensive collection of work from the middle east, is the solo work of Manuel Lopez Oliva, a Cuban artist: Open Scene,whose acrylic work on canvas mesmerizes his viewer with an allegorical collection of figurative portraits that imbue the surface with small designs of shape, line and color.  The deep and usually dark earthy background color field most often sets the stage for a variety of female motifs. 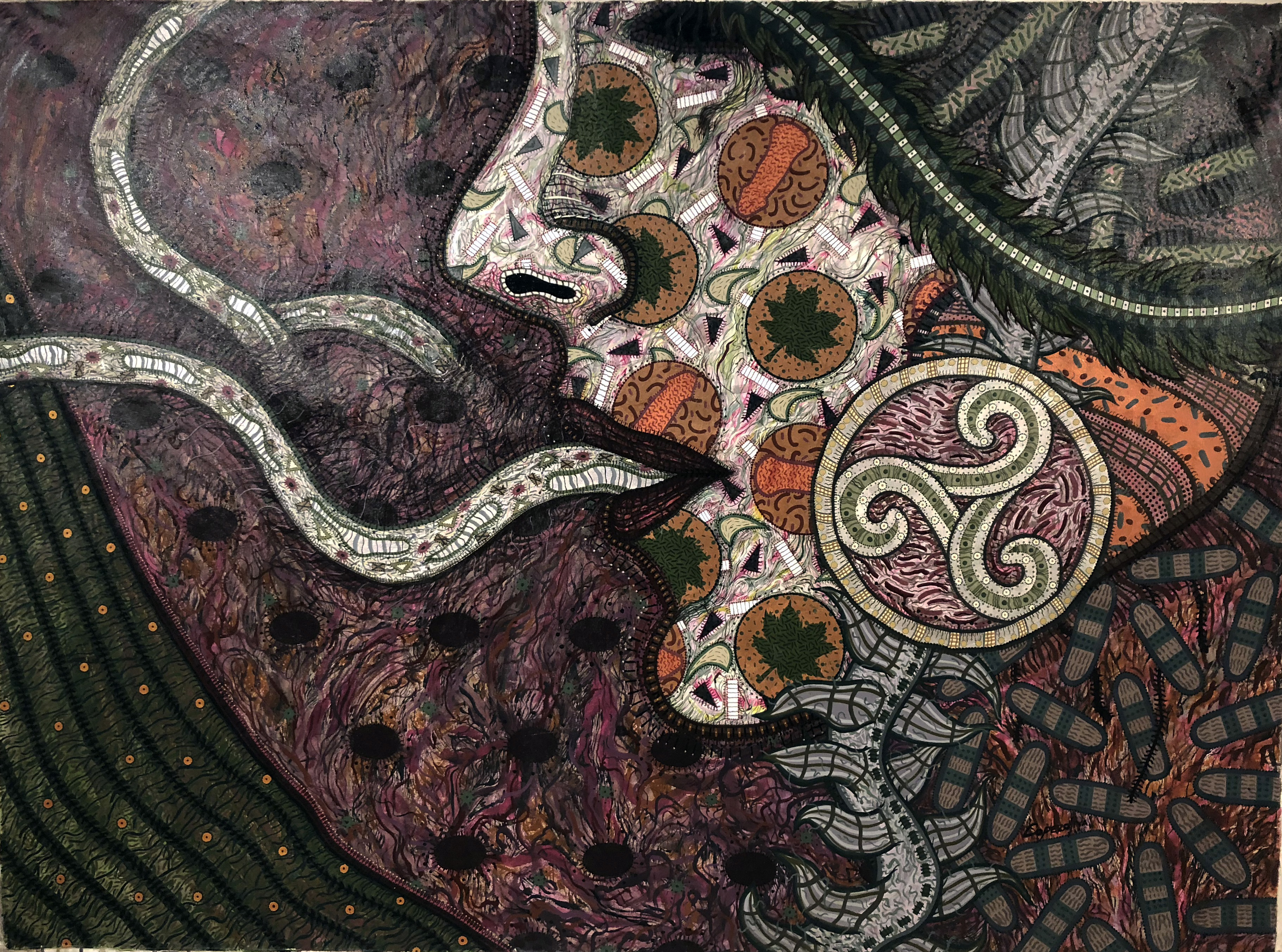 The artist was present for this exhibition and described the influence of growing up in Manzanillo, Cuba, where his father conducted workshops for people who participated in the decorations of making carnival masks. He relates to me the influence of the theater on him as a young boy, caught up in the “art of acting and stage design” where symbolism would abound and dominate the magical transformation of regular people into characters of color and light. I asked the artist about the snake-like motif that dominates much of the work, and he describes the shapes coming from the head as thoughts, and from the mouth, representing language, both in the abstract.

These masks, with a refined technique, reveal a sensual utopian aesthetic and provide a formal, chromatic, ideographic and textural intensity. Working out of his house-studio, he lives in Leonor Perez district among the streets of Havana, Cuba. 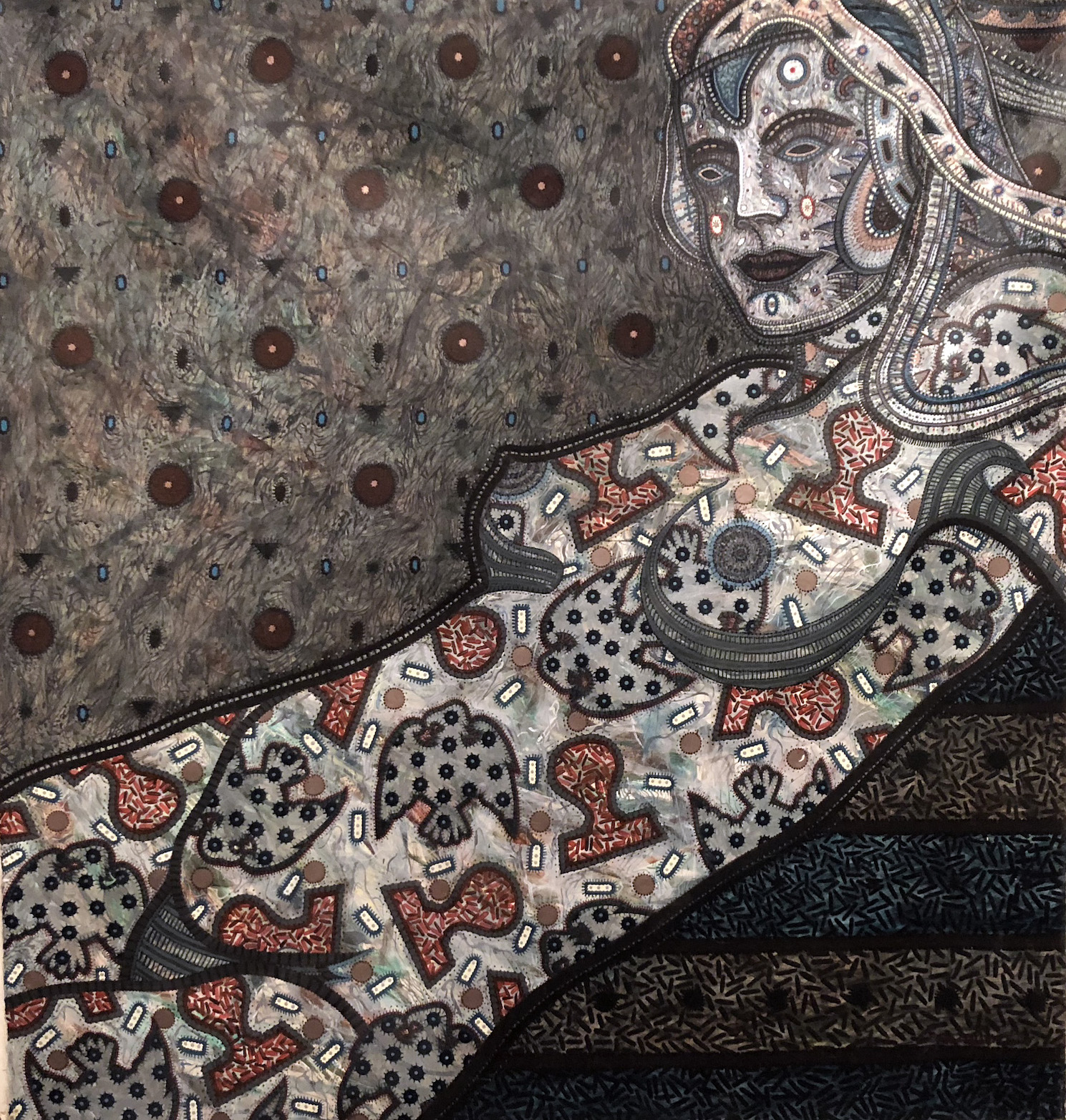 Manuel Lopez Oliva, “Seduction has a Mask”, Acrylic on Canvas, 2009

Manuel Lopez Oliva is a consulting professor at the Superior Art University and Art History Faculty of Havana University.  The exhibitions Open Scene and Mitli Mitlakare now on display at the N’Namdi Center for Contemporary Art and run through January 5, 2019.