For Queens-based artist David Opdyke, the manipulation of scale as a means to transform great existential threats posed by the ceaseless appetites of late capitalism conjoined with the convulsions of American politics, into something more relatable–models that collapse overwhelming chaos into tragicomic vignettes–is an essential tool to remind his audience of its place in a complex narrative of global survival. In sculpture, installation, animation and drawing, Opdyke relies upon our innate sense of childlike wonder at a miniaturized world as it transforms the relationship we have with our own full scale world, teetering on the edge of collapse and brimming with grown-up trauma. With a vision that is both epic and intimate, balancing the sublime with the grotesque, he threads the marvelousness of the microcosmic with macrocosmic socio-political concerns. Having previously worked as a scenic painter and architectural model-maker for 20 years, tweaking perception to clarify the structure of the world seems a natural fit. 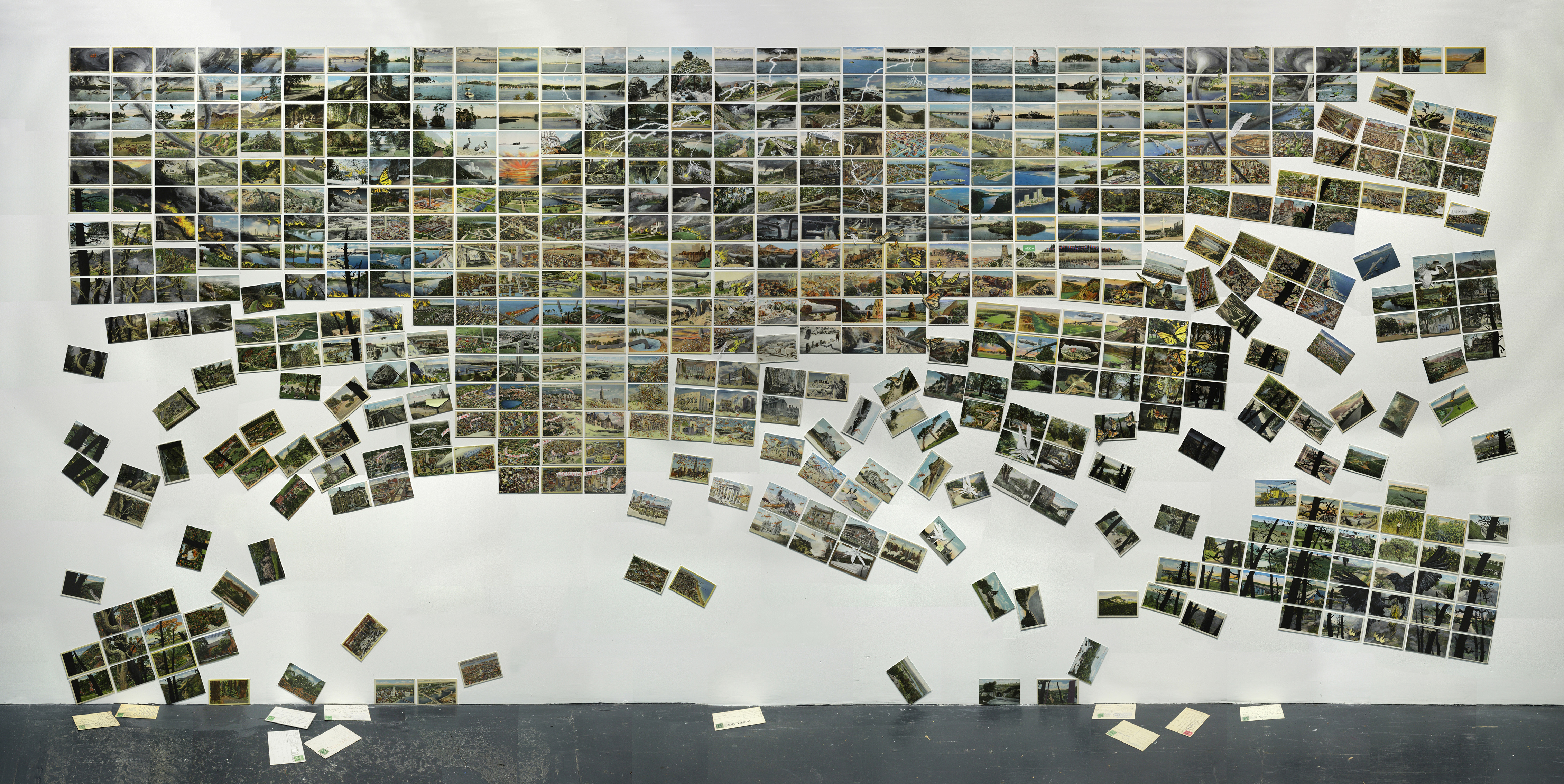 “David Opdyke: Paved With Good Intentions,” on view at The University of Michigan Institute for the Humanities in Ann Arbor, where Opdyke is the 2019 Efroymson Emerging Artist in Residence, presents a selection of eight works, including a collection of animated shorts, a two-channel video, and most notably an ambitious site-specific installation comprised of 528 postcards, titled “This Land” which gathers many of the artist’s preoccupations into a single monumental statement. 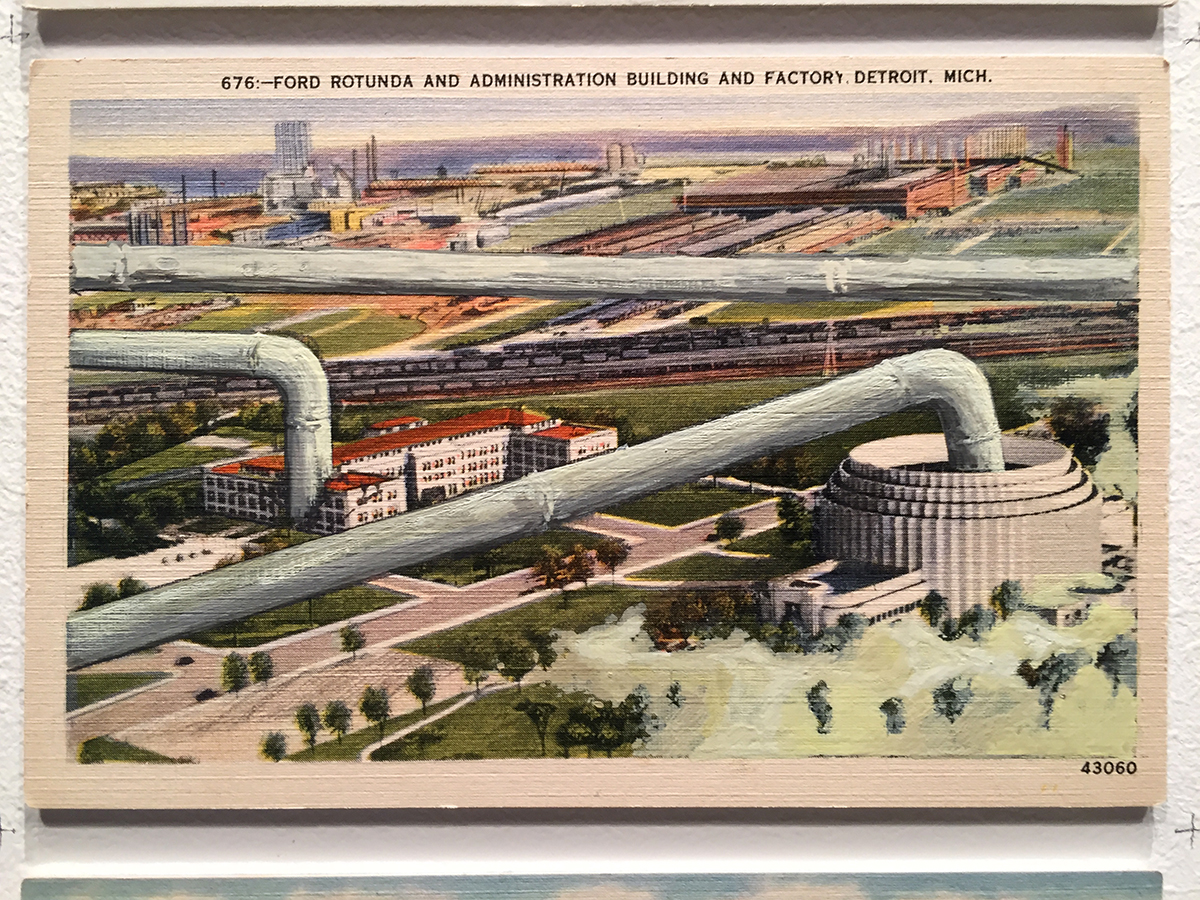 To start with one of the 528 postcards, at the top of which is a caption: “676: –FORD ROTUNDA AND ADMINISTRATION BUILDING AND FACTORY, DETROIT, MICH.” The card, from the mid-20thcentury was printed on a stock using a process that replicated the texture of linen. Its horizontal image appears at once photographic, but also painted, since it has been hand-tinted. Upon closer inspection, the character of its printednessemerges: the image breaks down into a fuzzy pattern, accentuated by transparent colors that bleed and overlap– a patch of grass seems to become a building and vice versa.

The subject of the card is a landscape containing the Ford Rotunda, a Streamline Moderne structure originally built for the 1934 “A Century of Progress International Exposition” World’s Fair in Chicago, to serve as a pavilion for the Ford Motor Company. It was later moved to Dearborn, Michigan on the outskirts of Detroit where it housed elaborate displays celebrating industrial progress, until it was destroyed in a fire in 1962.  Additionally, the original Ford Administration Building (destroyed in 1997) is shown, the River Rouge and in the distance Ford’s massive Rouge factory. All of this is seen from a bird’s eye view as a celebration of the way in which Ford transformed the landscape of Dearborn into an Industrial metropolis that promised a better future.

However, there is a hand-painted intervention within the image that is not quite right. There are large grey pipes horizontally slicing through the view; massive pipelines dwarfing the scale of the architecture in the postcard. A pipe slams into the Administration Building causing cracks in its limestone. A pipe penetrates the roof of the rotunda. There also appears to be a flood whose crashing waves are encroaching upon the Rotunda. Where are the pipes coming from? Where are they going? From where are the flood waters emerging?

The answers appear when perception is adjusted and one steps back and finds that this is a single postcard situated within a grid of 528 postcards, assembled as “This Land.” But as the sources of the pipelines and the flooding are revealed, many more questions emerge. Stepping even further back, the individual postcards coalesce into a view of the sublime. Remarkably, although each postcard is of a unique landscape in disparate US locations, Opdyke achieves the sort of geographic sleight-of-hand normally reserved for Hollywood cinema, in which far-flung locations are collapsed into a single unified setting. This single setting resembles a Hudson River School landscape, complete with mountains and valleys, snow-covered peaks, bodies of water, a blue sky. But before Woody Guthrie can be conjured, and his refrain of this land being made for you and me, the entire picture falls apart. 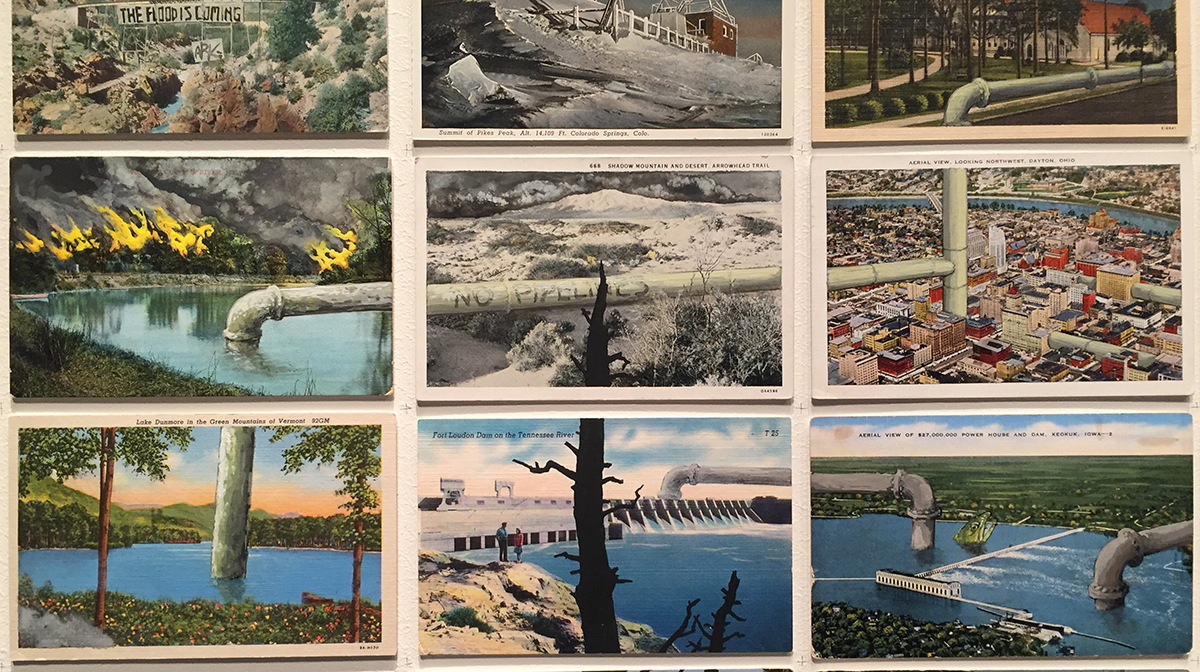 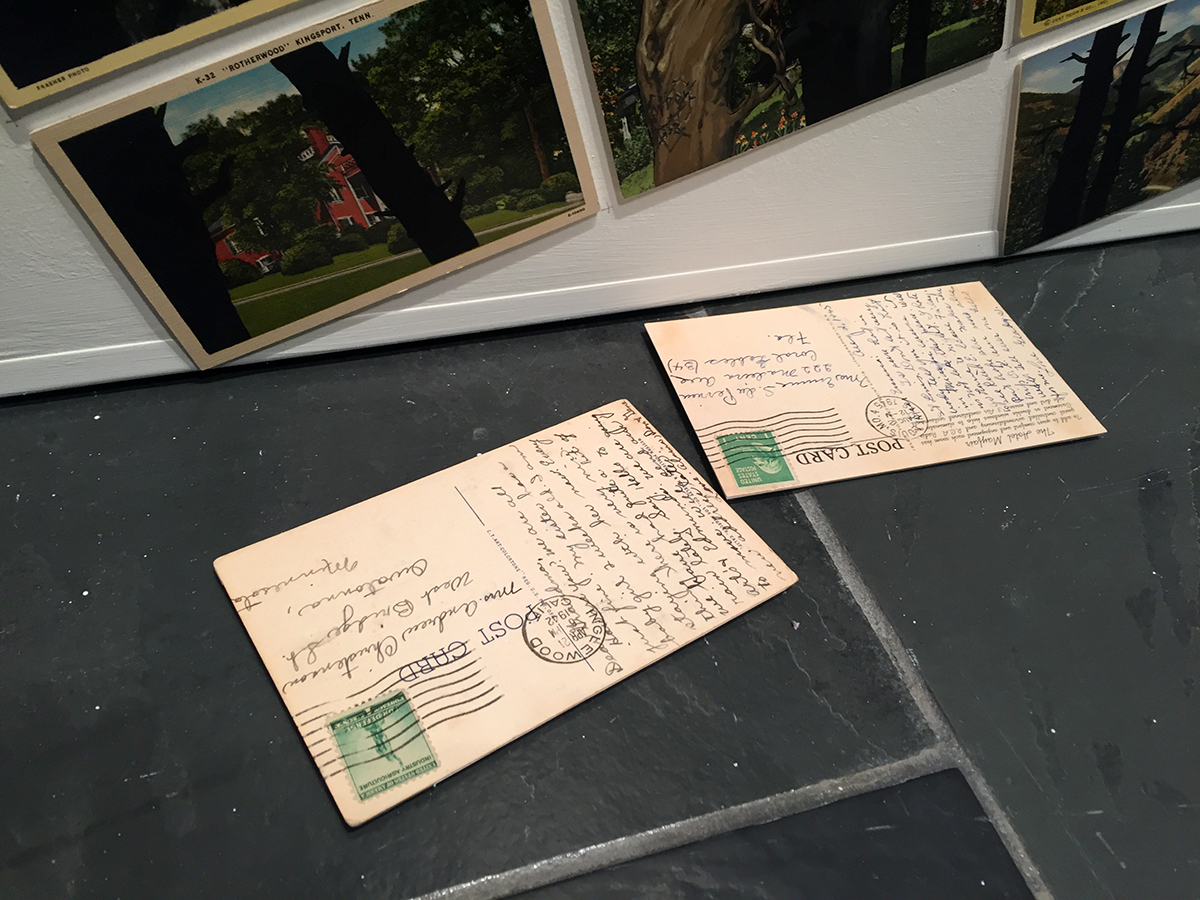 The grid of cards collapses as the panorama is fractured. Cards slide down the surface of the wall, with some having dropped to the floor. You can read the reverse of some of these, with the handwritten sentiments of marveling travelers frozen in time. With the breaking apart of the whole comes the need to reexamine each card closer. What was once sublime is now complicated as the mural begins to resemble Thomas Cole’s “The Course of Empire” (1833-1836),  a cycle of five paintings that charts the rise and fall of human civilization: “The Savage State”, “The Arcadian or Pastoral Phase”, “The Consummation of Empire”, “Destruction” and finally “Desolation.” 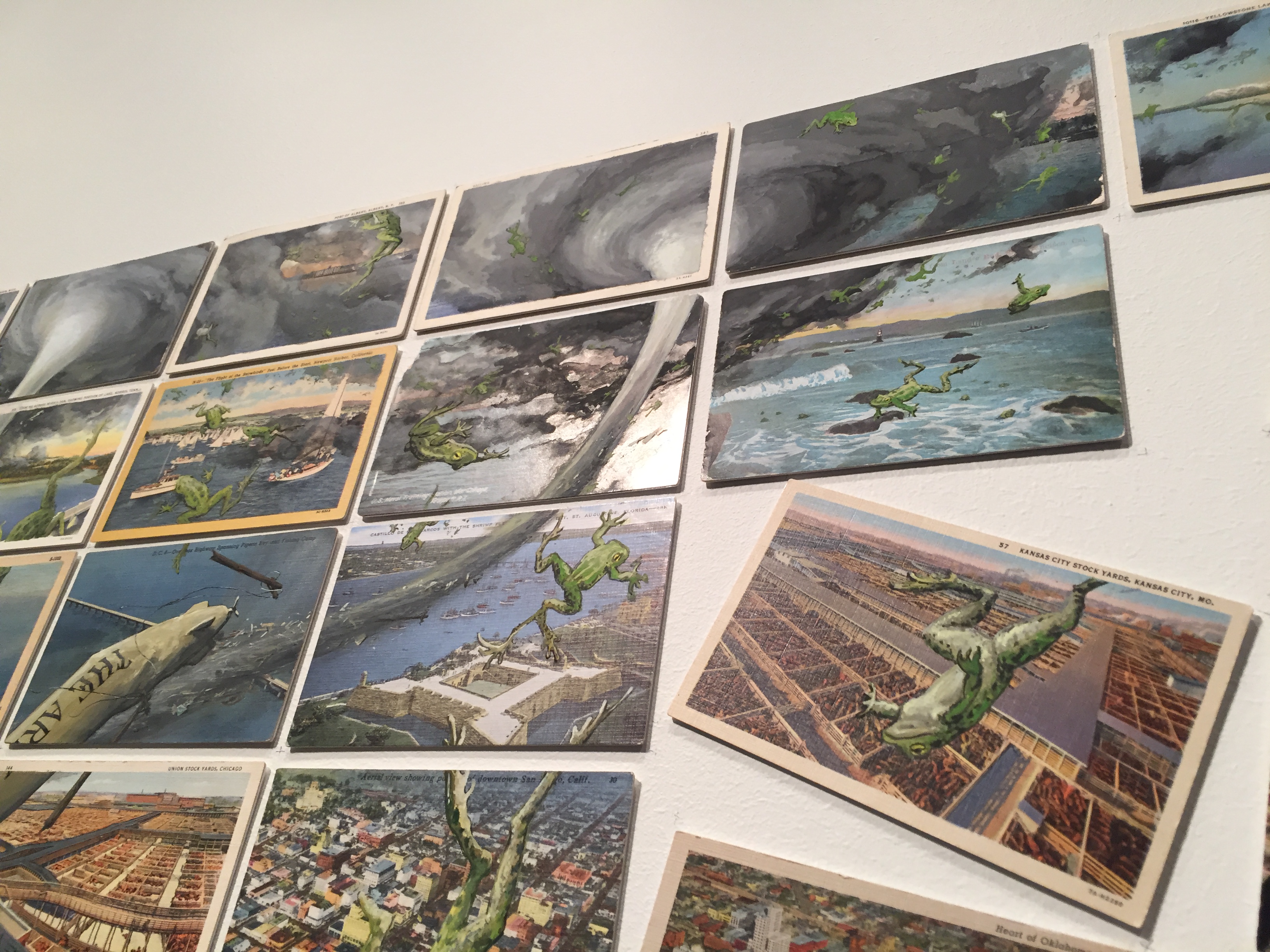 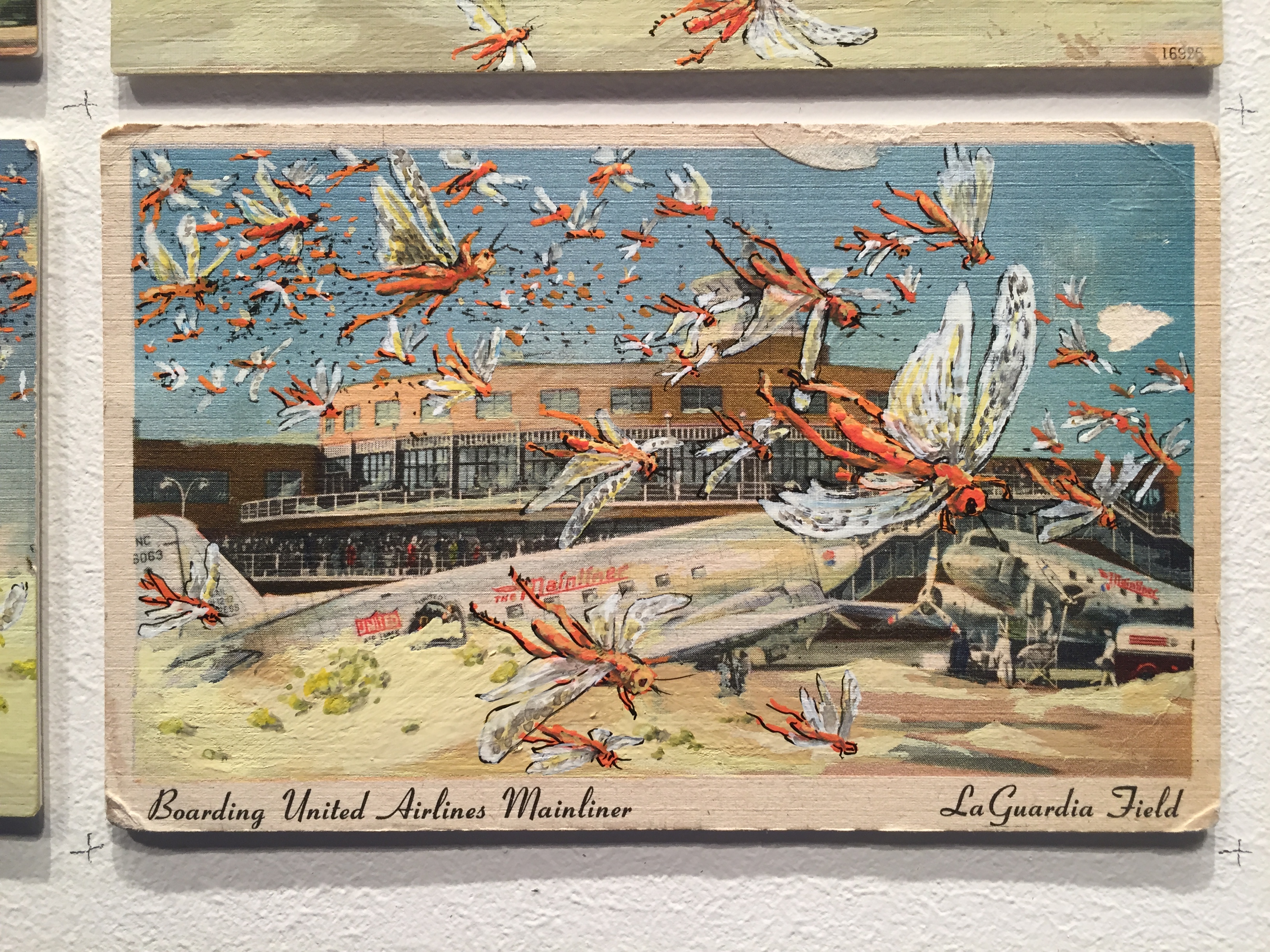 As with the ironic intervention seen in the depiction of the Ford Rotunda, ruin and destruction has been embellished upon most of the other postcards depicting an idealized American landscape. Aside from occasional moments of calm, on an almost biblical scale there is famine, flood, fire and pestilence. Dark grey maelstroms and tornado funnels abound, frogs rain down, locusts swarm, forests burn, crops freeze, and lightning bolts emerge from black clouds that conjure visions of the English Romantic painter John Martin (1789-1854). But this is no mere visitation by the Four Horsemen of the Apocalypse, as Opdyke reminds us that humanity is perfectly capable of delivering its own end times, daily. 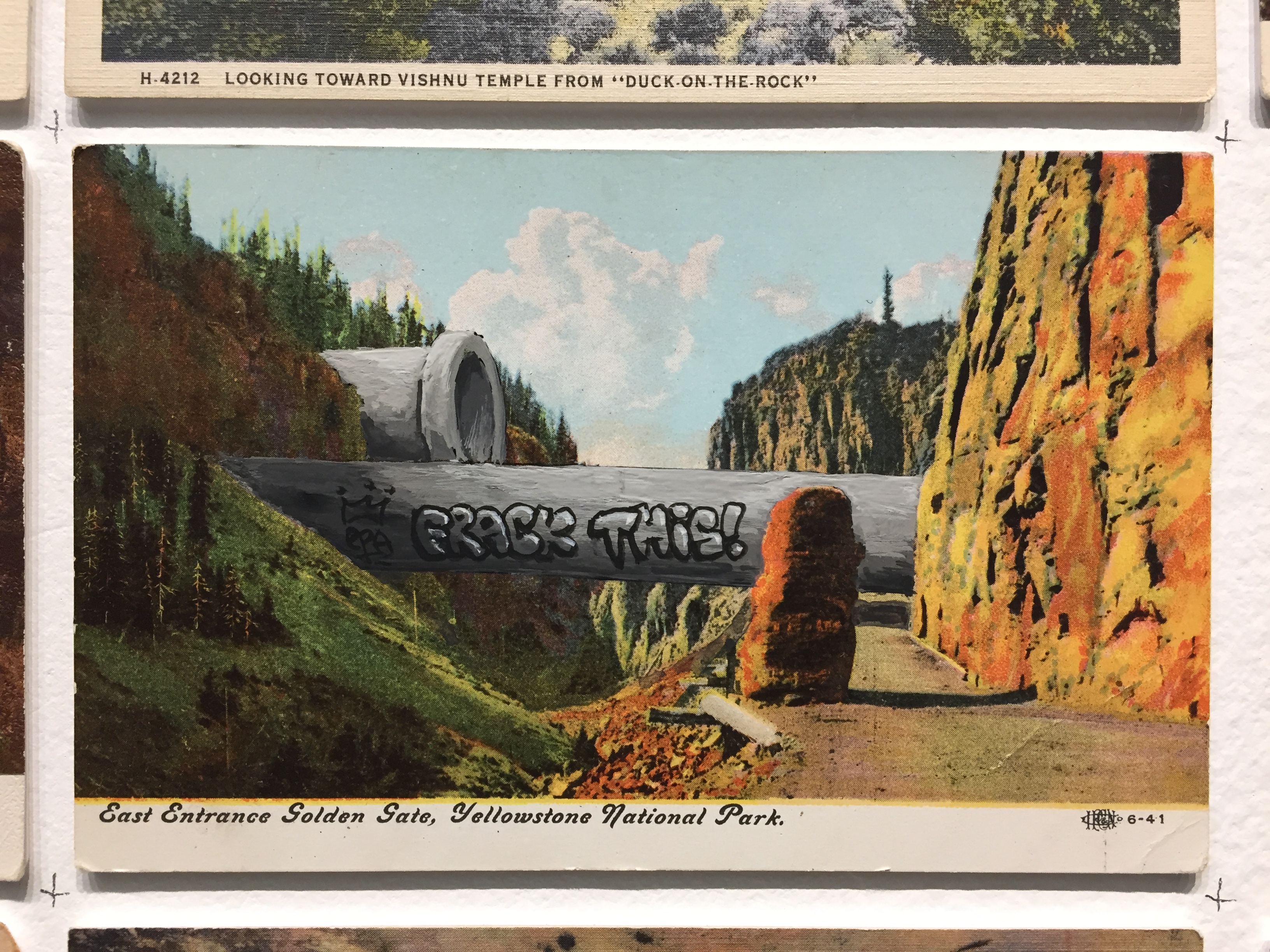 There is fracking and oil pumping and water diversion… endless pipes serve to carve up and bleed the dying landscape before us. What was once idealized in these postcards: industry, agriculture, transportation, glorious infrastructure projects advertised as the youthful ambitions of a country building itself by way of engineering the land, has soured. A dream of opportunity for constructing a utopia has morphed into the ruinous late capitalist agenda of monstrous development at any cost. Excessive waterfront high rises have been erected, massive walls are built, as human behavior results not in an organized response to tackle its own mistakes head-on, but instead leads to ineffectual political infighting and ever more chaos in the form of panic, cults, and tribal division. 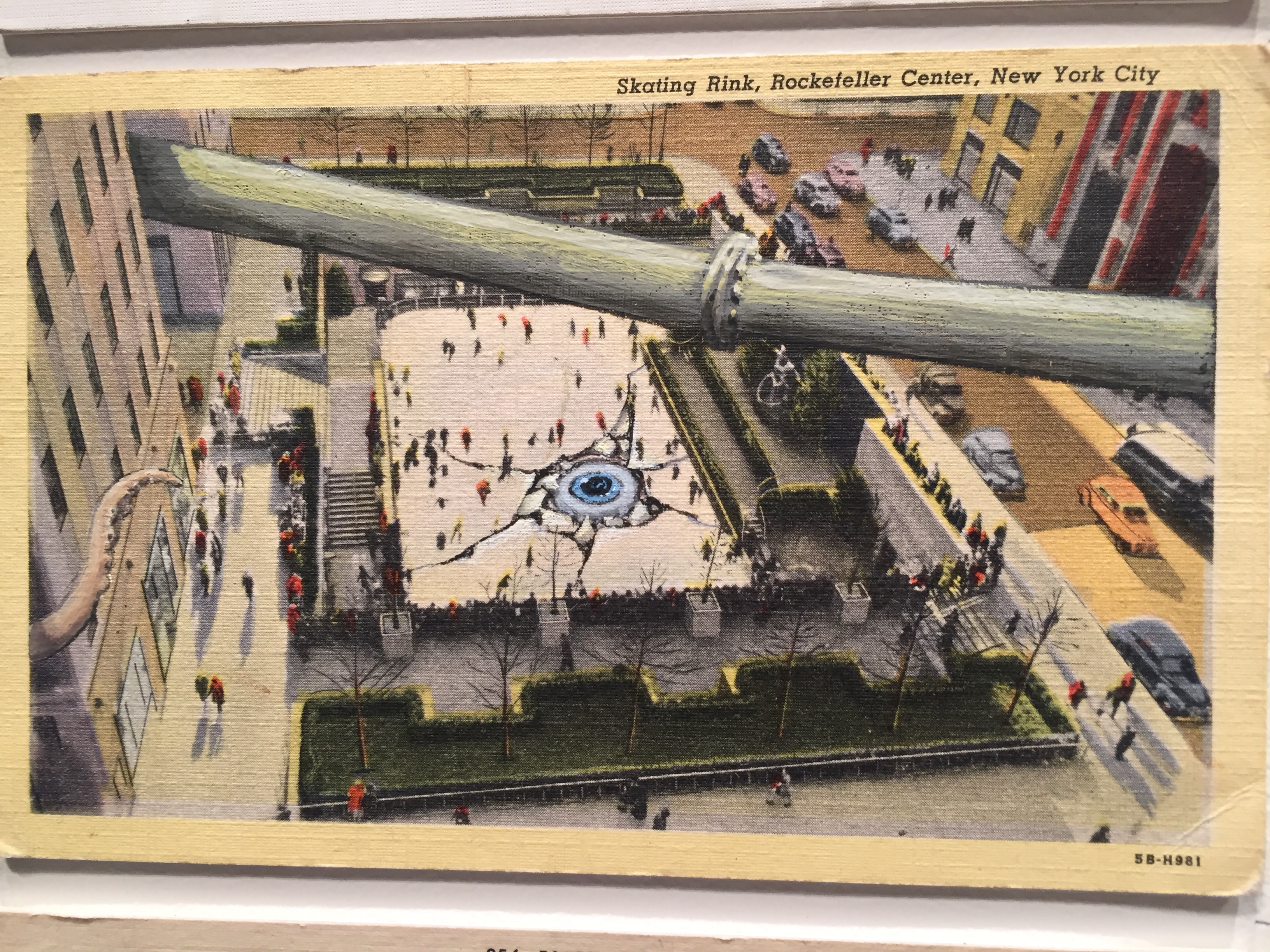 And then there are the B-Movie monsters populating this postcard landscape: giant insects, sea creatures and omnivorous plant life. Mutant spawns that could be the result of unchecked capitalism reengineering nature. B-movie horror and disaster scenarios have always been a stand-in for human irresponsibility and the monstrosities on display here are no exception. There a moments that seem to nod toward “It Came from Beneath the Sea” (1955) with a set of Ray Harryhausen tentacles overtaking a riverboat on the Mississippi. There are crumbling edifices and cataclysmic cracks  that could have been manufactured on a studio backlot for a film such as “Earth vs. the Flying Saucers” (1956). Roadways and bridges clogged with motorists attempting to escape certain doom recall the mass hysteria of Spielberg’s “War of the Worlds” (2005). 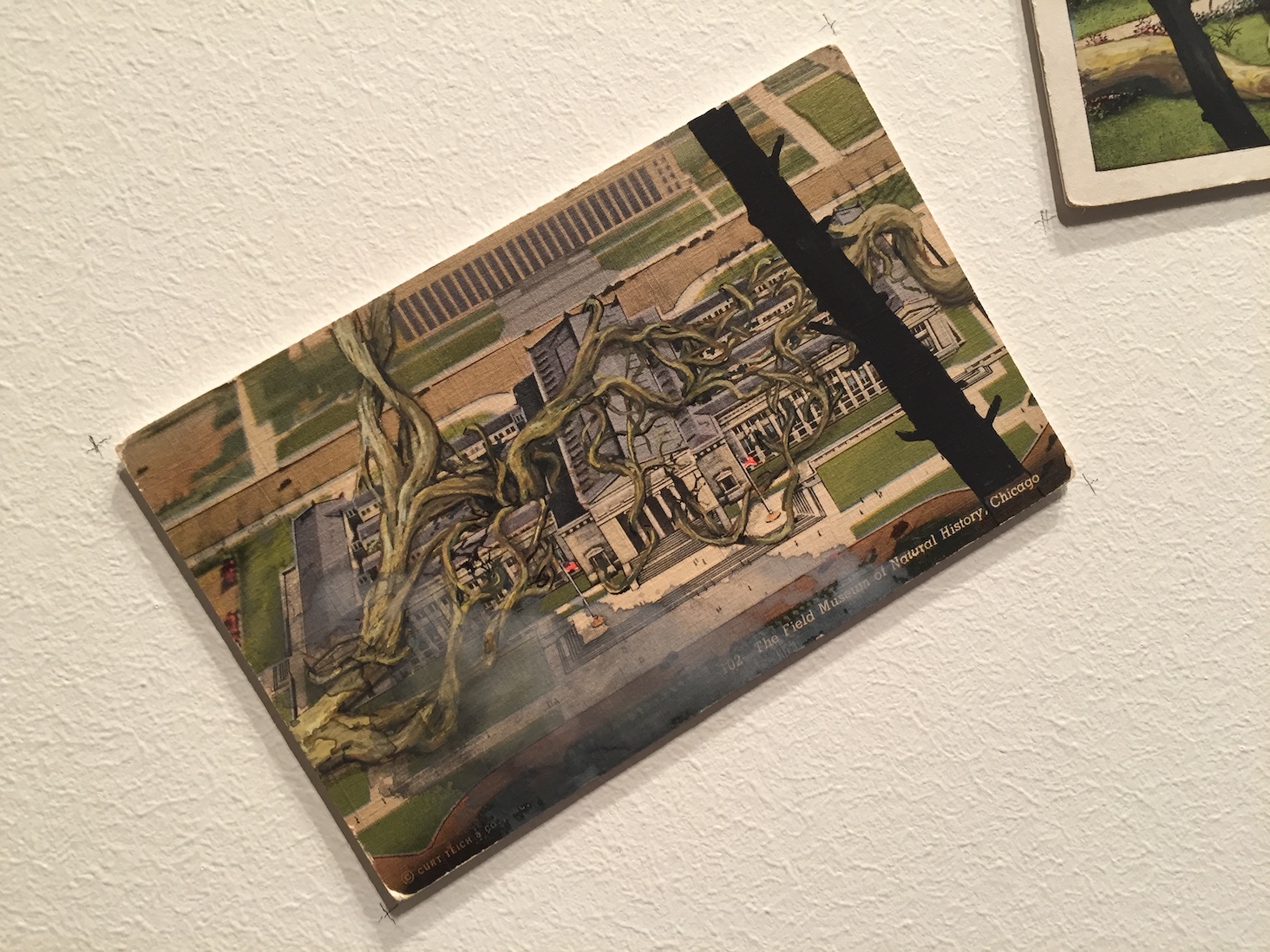 Opdyke is establishing an allegorical narrative of ironic critique by repurposing and rupturing romantic, idealized panoramas of the past. There is a kinship with contemporaries such as Walton Ford and Alexis Rockman, who both conflate scientific illustration and heroic history painting into large scale Quasi-Romantic works ironically embedded with destabilizing minutiae. Along with Ford and Rockman, these are images that compress past, present and future into a single tragicomic narrative. That Opdyke sets all of these hand-embellished catastrophes against the miniature hand-tinted backdrop of the vintage postcard as a contemporary gesture, makes perfect sense. These are souvenirs of place, and by extension of historical memory and the subsequent abandonment of the past. They represent an ideal once embraced and long-since discarded. The postcard was once a way to communicate “I’ve seen this. I was here.” It was a forerunner to Instagram as a means to place ourselves into the world and report back home as a way of confirming our feats of travel and locating ourselves within a larger narrative of collective experience. 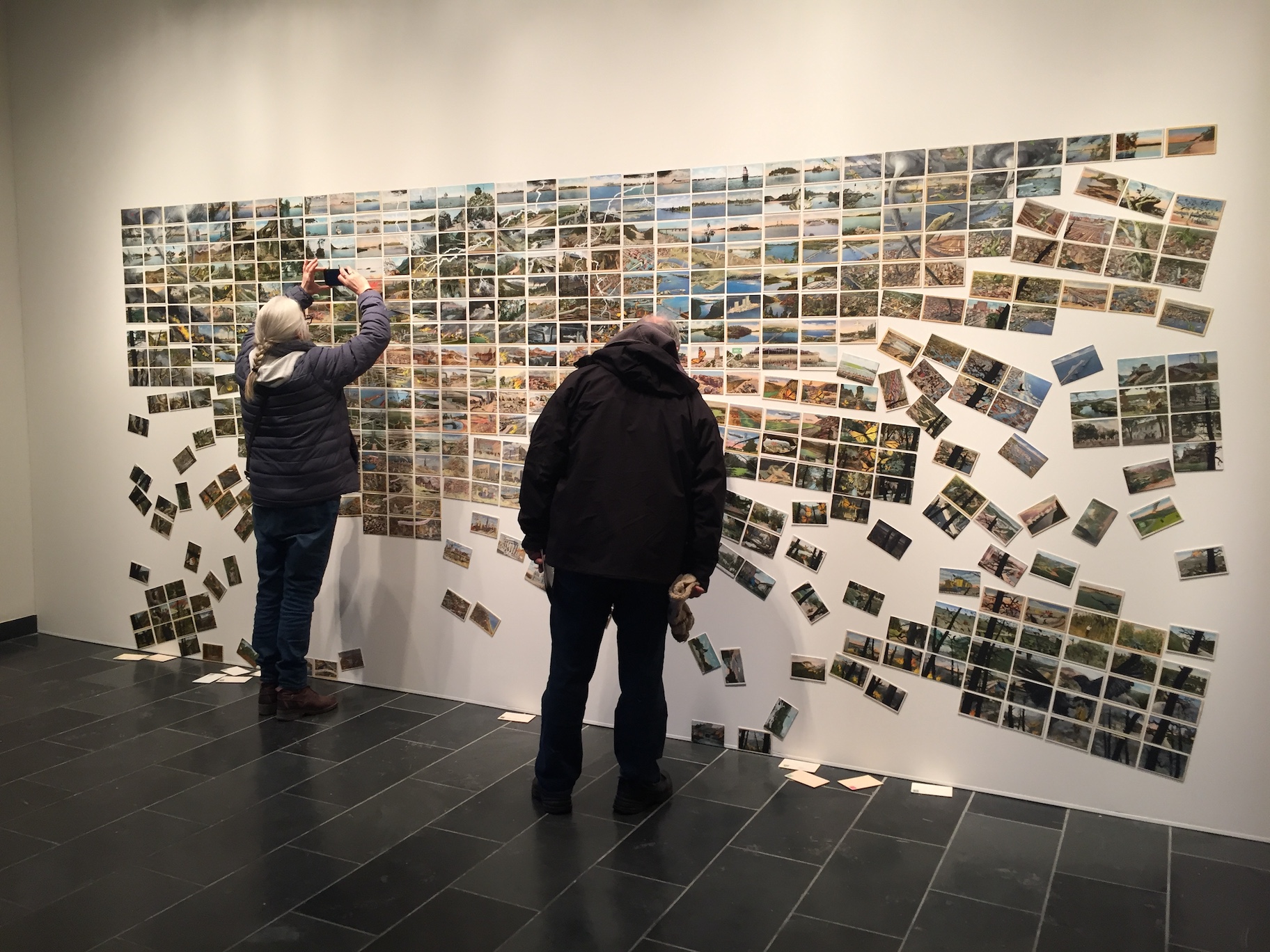 Most of those who attended the opening of “Paved With Good Intentions,” crowded before “This Land” while taking iPhone photos of select views. Were they seeking out places they had been? Places where they were from? Documenting specific horrors that amused? Rarely did I see any of the viewers backing up to read the entire piece in its state of faux sublimity. All were pushed in, investigating at the closest possible viewing distance. Locating themselves in the details. Opdyke’s use of the postcard acts as a time machine for what has, is and will be seen. It is a way to implicate the viewer within the continuum of this catastrophic narrative in the Instagram era by way of asking us “You see this, don’t you?” Yes, we do.

David Opdyke @ The University of Michigan Institute for the Humanities  Through February 27, 2019