The title of this new exhibition of work by artist Jim Shrosbree, “thinking/still,” is evocative of Irish playwright, poet and novelist Samuel Beckett who in his novel Molloy (1951), wrote “To restore silence is the role of objects.” Indeed, the objects of Jim Shrosbree are imbued with the capacity to distill and render the space they occupy with a thoughtful silence. “thinking/still” also suggests two different states of being, one seemingly active and one inactive, that are both the same. The oblique slanting punctuation mark separating the italicized action of “thinking” and the upright “still,” serves to both divide and join these two states. To be thinking is to be still. Stillness and thought are complimentary to one another, allowing for a new space to emerge.

The twenty six works in the exhibition, consisting of the sculptural, the drawn and the painted, form a thoughtful installation attentively harmonized to the intimate space of Paul Kotula Projects. The scale of Shrosbree’s objects recall the work of Swiss artist Paul Klee (1879-1940) in their seemingly modest presence—in a time when unabashed, leaden spectacle is the go to in art, Shrosbree accomplishes so much more by downshifting the scale of our immediate experience and necessitating a deeper dive into the details for a prolonged experience. The cumulative effect on the gallery environment is that of quieting down the space for subtle equations to unfold, establishing the necessary stillness to patiently enter into the smaller spaces contained within each object. It is an environment that reverberates with possibility where one is gently guided from one situation to another and then back, from slow to quiet to a state of revelation. 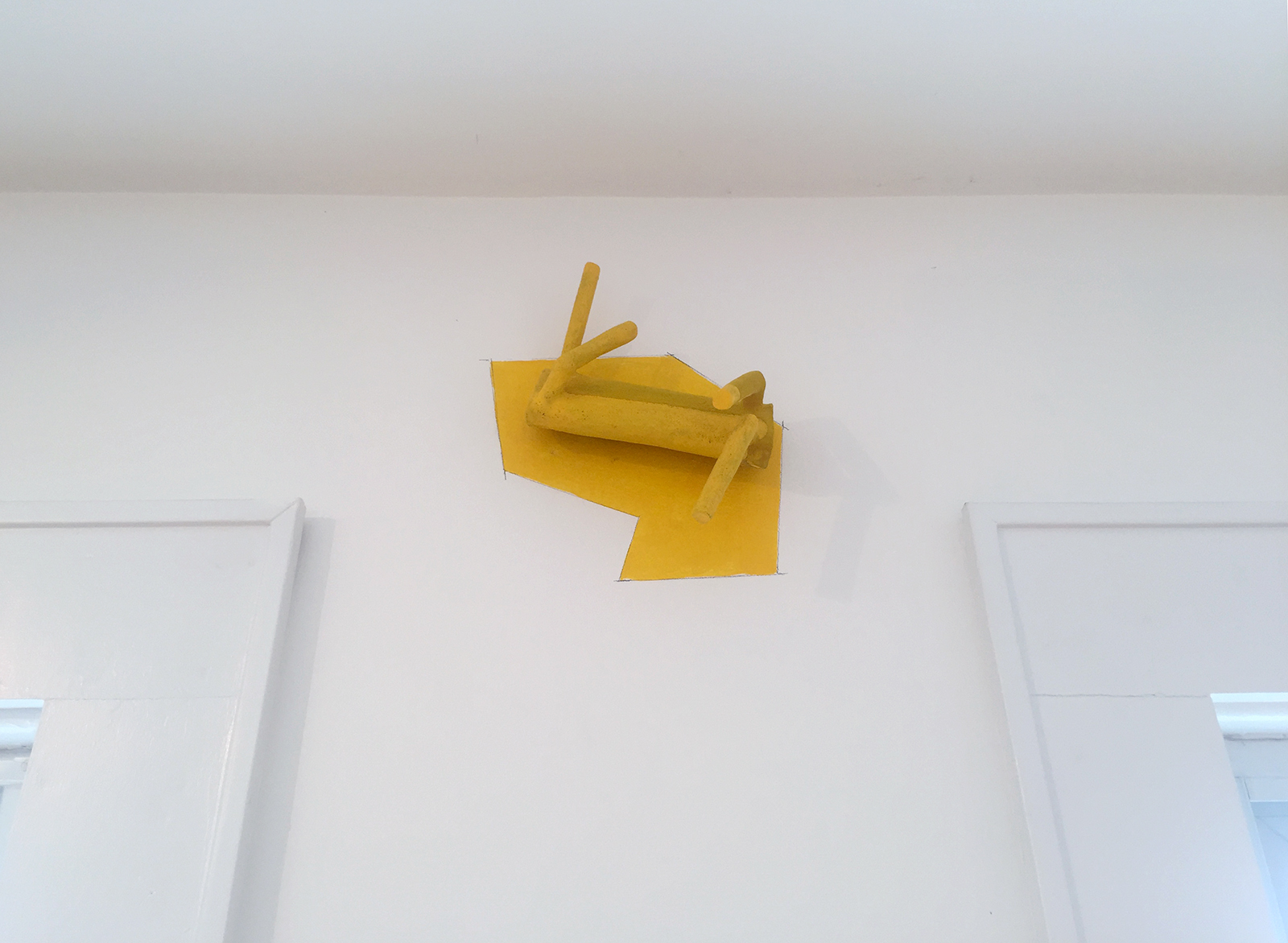 CAD Y (fluer) (2016) is a work hiding in plain sight like some sulfur covered arthropod that has scuttled into position between two windows  just below the ceiling of the gallery. It is anchored into a geometric zone of yellow enameled onto the wall within drawn graphite edges. It is as if the form shed itself onto the wall to reinforce the necessity of its being there.

Many of the objects can be viewed as situational chamber pieces with a set of circumstances that chart a series of relationships. They are small, formal narratives or event mechanisms in which Shrosbree unfolds a circuit of experiences to set off a string of associations. At the root of his practice is the act of drawing as thinking, and this translates into the intuitive path making found in the objects. 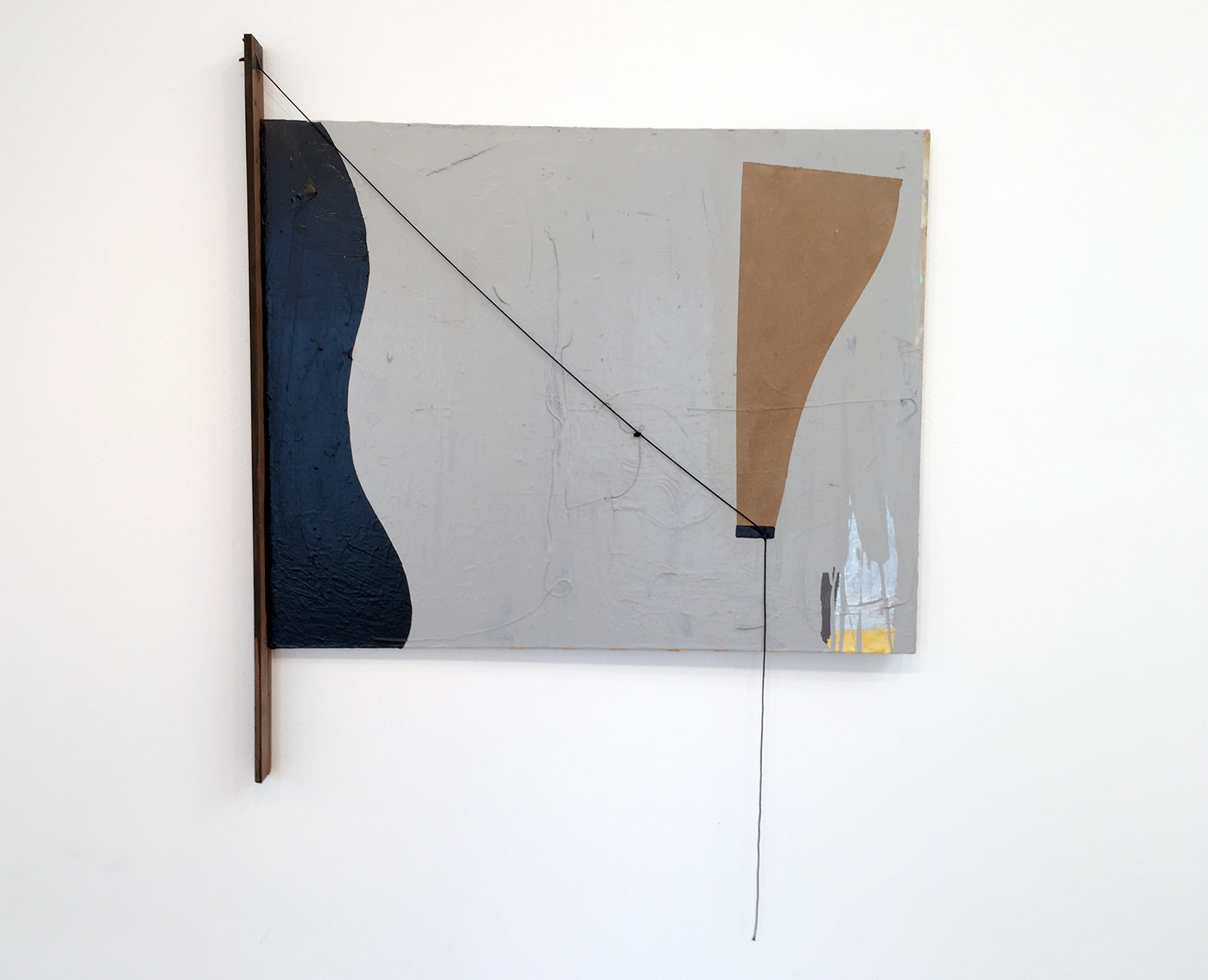 In My Ship (paradise) (2019), a painting is augmented with a string containing a little knot, held in place by a bit of tape and attached to a wooden stick. Things have been happening here as if an industrious child dreamer has constructed a rig with a secret intent. A string dangles humorously and the whole affair appears to be tentatively keeping itself together. Alternately absurd and poetic, the piece invites wonder with a minimum of means.

There is a hint of the absurd throughout Shrosbree’s work, with forms that are simultaneously graceful/clumsy, present/not present, full/empty. Akin to twittering organs rather than machines, the tentative nature of the forms and the situations they occupy, lend them a sense of ridiculousness and incongruity, and yet they also seem to transcend their nature the longer one spends with them. His titles indicate a humorous reconsideration of language through abbreviation, fragmentation, and an emphasis on spoken sounds. There is a play with words that echoes the formal play in the objects, as the texts are succinct yet also vague. With his use of color, Shrosbree tends to keep things simple on the surface of it all: yellow, red, blue, white, black, with forays into an orange or a green, however this serves as a means to softly beckon us into a deeper, more complex set of formal considerations. 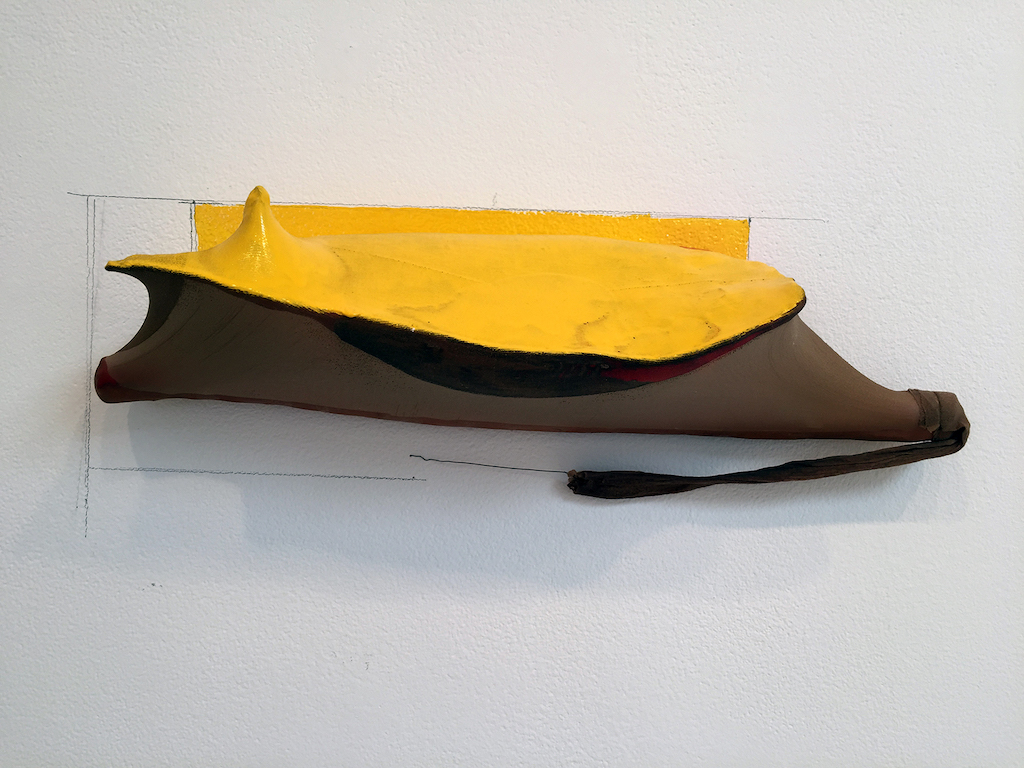 With  RO (coco)  (2019), Shrosbree breathes complex life into what at first read is a misshapen pouch or bag in an unlikely union with the wall behind it. A large expanse of white space surrounds the piece, beckoning the viewer to move in closer for a proper examination. The irony of the title lay in its reference to the elaborately ornamental, which in this case is comprised of the smallest shifts and gestures that guide our investigation of its construction. The piece appears beneath a yellow shell which in fact is not a shell. It’s skin appears soft, pliable, stretched, yet passages are hardened with enamel. A limp nylon tail trails beneath with a small wire emerging from it. Follow the wire and it disappears with an absurdist flourish into a tiny hole bored into the wall. Beneath this hole, another hole. Perhaps a first attempt at wire insertion. From this second hole, a graphite line is drawn horizontally to a vertical line that eventually forms a frame around the piece with a ground of yellow enamel applied within it to merge the form to the wall. Figure/ground as one. On even closer inspection, at the forensic level, little bits of pink eraser droppings dust the baseboard beneath the piece—evidence of Shrosbree’s process of working the graphite lines further. 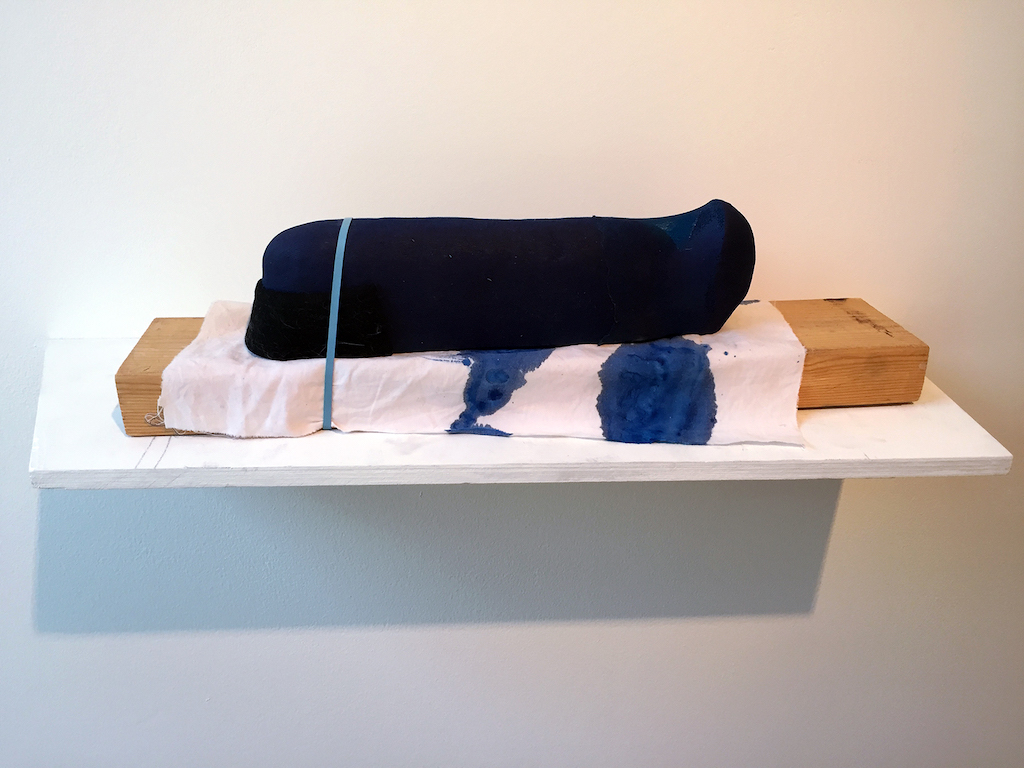 Likewise, a detailed examination of UB (leng) (2017), reveals a small mess of dog hairs gathered on a wool “muzzle” capping one end of a blue ceramic truncheon, resting on a rag stained with blue ink and lashed to a hunk of lumber. Unlike the work of artist Richard Tuttle, who employs a play between wall and form, drawing and the minimal manipulation of modest materials, Shrosbree’s work does not exist in a state of fragility. Despite its tentative nature, there is a kind of guileless presence that nevertheless insists on being there. 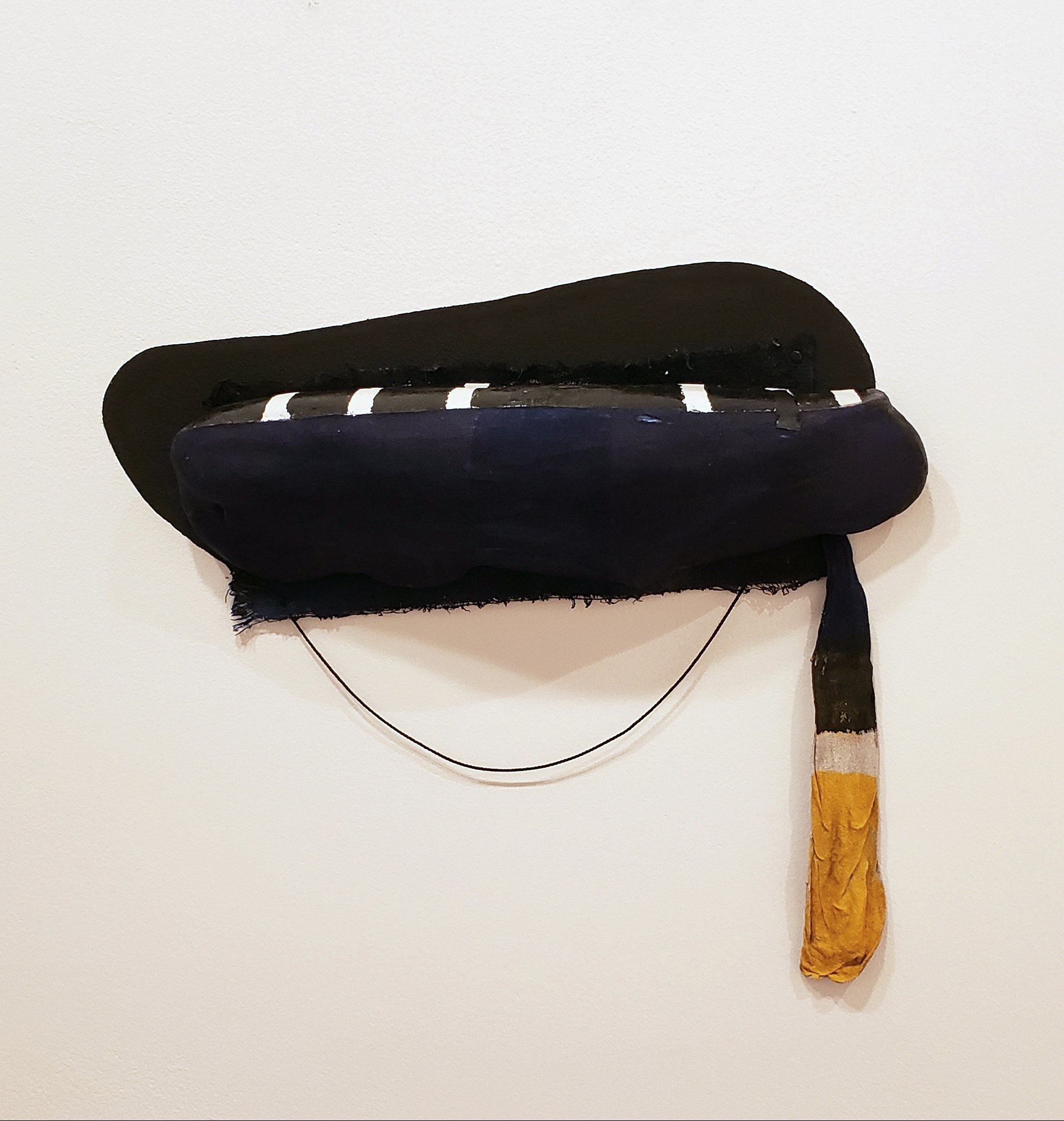 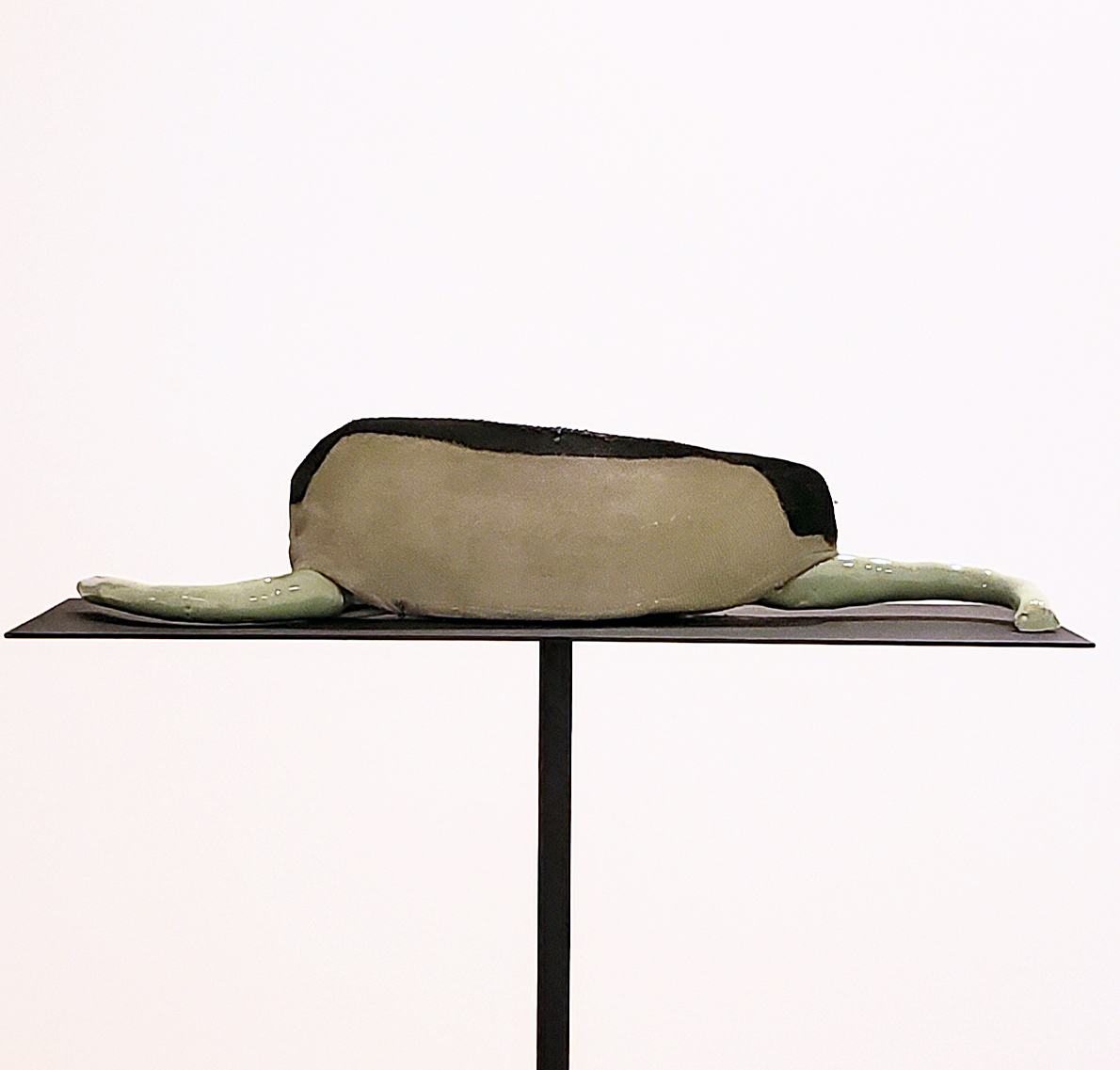 UB (VLoon) (2019) further elucidates Shrosbree’s interest in dichotomies: emptiness and fullness, the animate and the inanimate, the interior and the exterior. The flaccid and drooping painted nylon sack of the piece appears spent, yet it is attached to a form that appears ripe and full. Uno yuno (2019) is elegantly displayed on a steel plinth supported by a slender rod. Such refined stability is offset by the primary form: a seed-like entity suggesting an organic pouch plump with activity as sluggish tendrils emerge from either end. However on closer inspection, there is only the illusion of fullness within the cavity of the body. Its inflation has been implied. 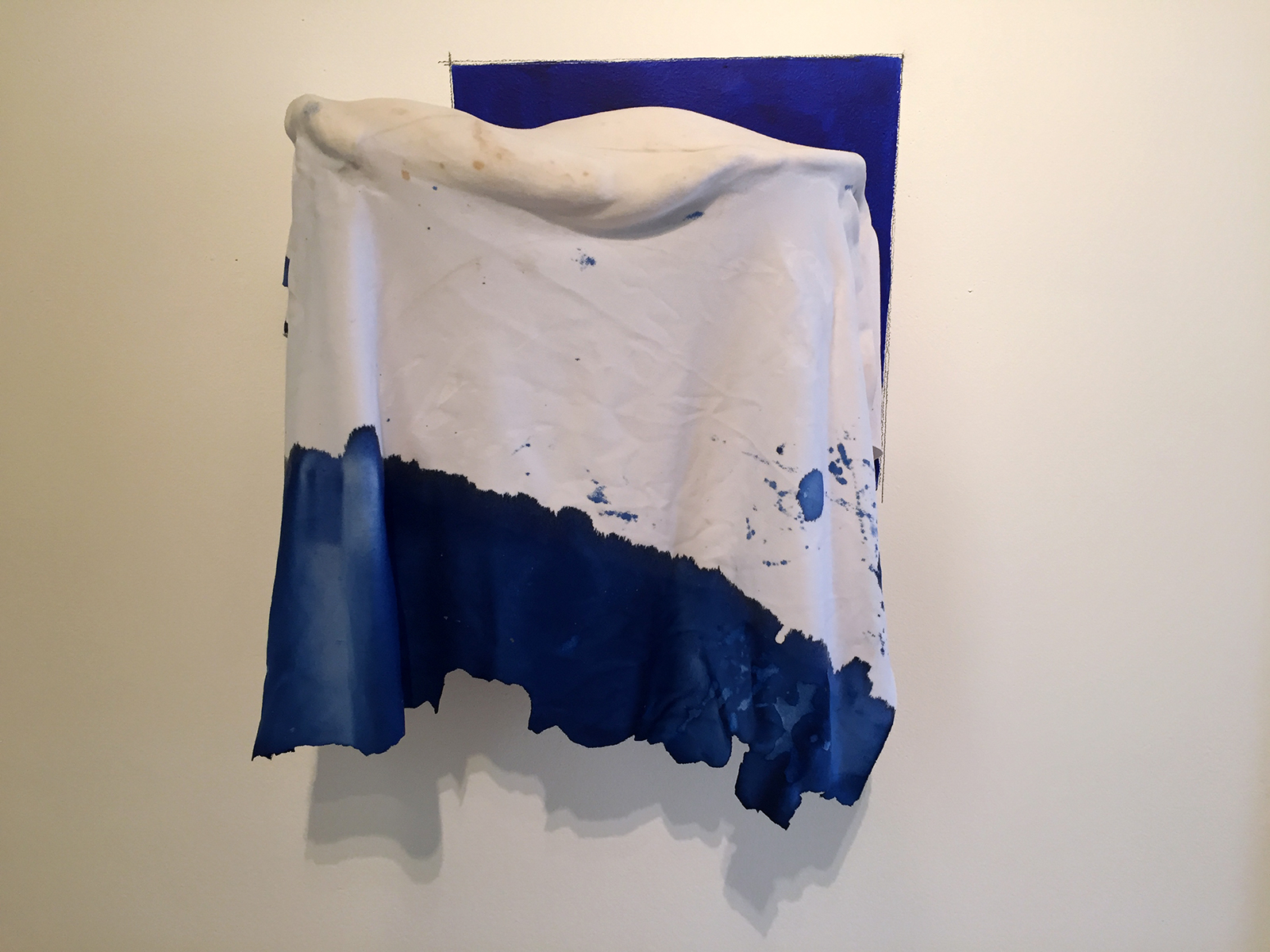 This embrace of illusion, of what is implied rather than shown, is central to the experience of Shrosbree’s work. In SAN (bdroop)(2019), a suspended ceramic cloth recalls the time-honored stage magic act of horizontally levitating a body beneath a sheet that conceals a platform or hidden wires. New Way (home) (2012) is a small painted relief with a wood flap seemingly supported by string, concealing the origin of a single humorous drip that emerges from under it.

In what is arguably one of the more consistently unique rooms in Paul Kotula Projects, a small chamber at the left of the hallway one enters from, there is, nestled in a corner, a piece titled Tandroop (2019). It consists of three stacked ceramic forms, each resembling sausages or baguettes or extrusions—take your pick, but it may be best to simply ignore the impulse to impose such obvious comparisons—atop a rectangular patch of folded cloth, all of which is held aloft on a painted red plinth and support shaft. The top form has been stuffed into a nylon stocking, it’s open end drooping down like some distended, tired mouth. And then there is the absurd grace note: a length of black string resembling a shoelace, perhaps four inches long, has been carefully laid atop the nylon encased form. To examine all of this closely, the viewer must crowd closer into the corner of the small room, perhaps even positioning oneself atop the low platform beside it. The very act of adjusting one’s body in proximity to this piece, lends the work a vaguely carnal presence. It is passive and yet unavoidable all the same. Humorous and yet sad. A lonely figure in a small room conjuring a whisper to come closer. 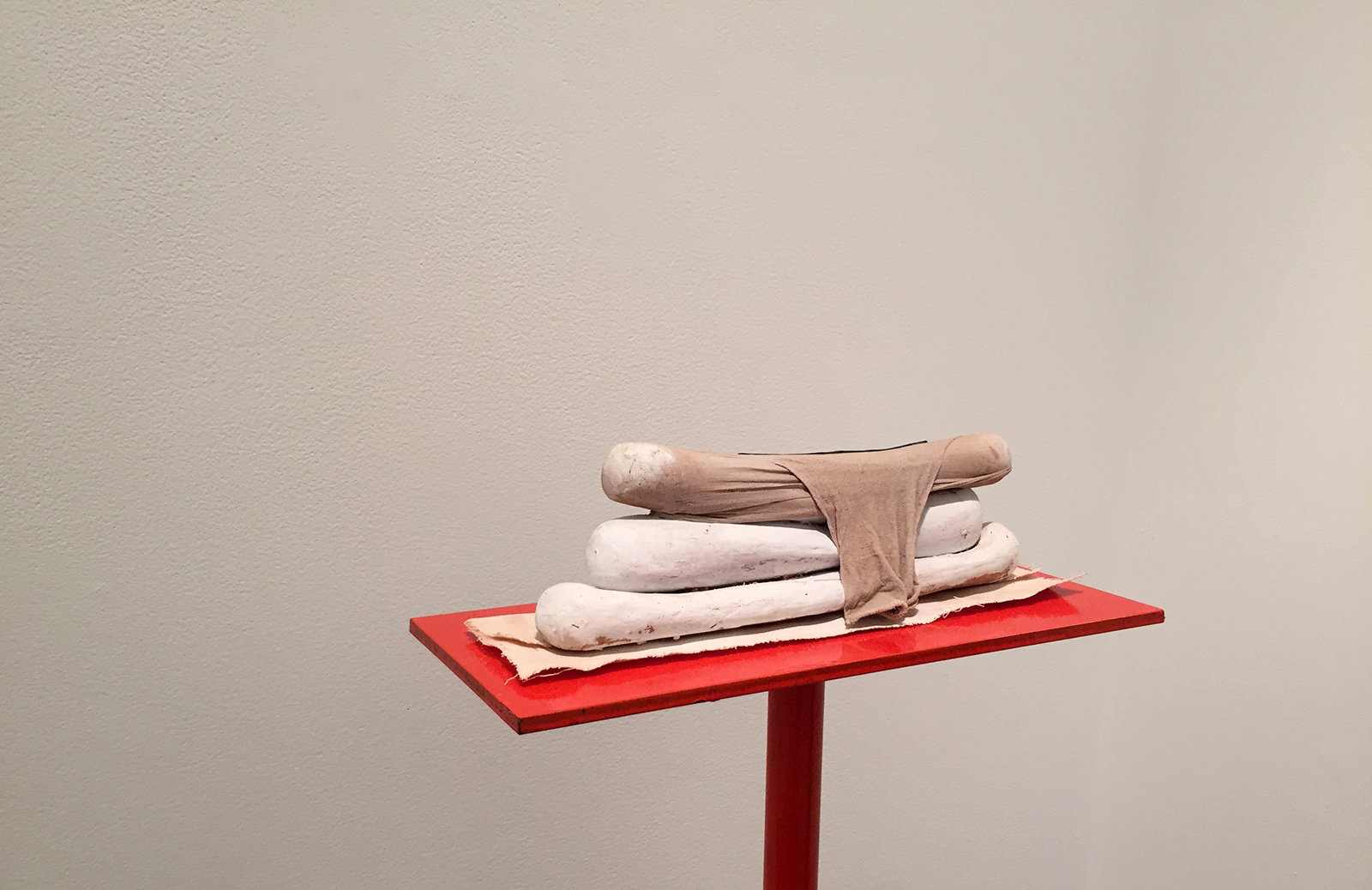 Within the tiny universe Shrosbree has constructed in the gallery, he allows us to gaze into little models of the shifting, liminal nature of consciousness. The French philosopher Georges Bataille (1897-1962) in positing his notion of form/formless, wrote in his essay “L’inform” (“Formless”, 1929): “A dictionary begins when it no longer gives the meaning of words, but their tasks. Thus formless is not only an adjective having a given meaning, but a term that serves to bring things down in the world, generally requiring that each thing have its form. What it designates has no rights in any sense and gets itself squashed everywhere, like a spider or an earthworm. In fact, for academic men to be happy, the universe would have to take shape. All of philosophy has no other goal: it is a matter of giving a frock coat to what is. A mathematical frock coat. On the other hand, affirming that the universe resembles nothing and is only formless amounts to saying that the universe is something like a spider or spit.”

Shrosbree allows for the formless to unfold as it will. Utilizing intuition as process, guided by a sharpened awareness, he places the viewer into a state of learning in which the formlessness of universal consciousness has within it connections, pathways, threads, associations. He constructs open, circumstantial spaces that provide meditative attunement; microcosmic narratives that gently unfold in multiple iterations depending upon how we, as investigators, follow the evidence and gather our experience together in pursuit of clarity. That he achieves this without a hint of overplaying his hand and allowing us the freedom to discover our own truths, is no small feat.

thinking/still is on view at Paul Kotula Projects through October 19, 2019