When we survey the majority of classic art imagery that has evolved over the last few hundred years, it could be divided easily into three categories:  Still life, figurative and landscape. Who dominates landscape painting historically would-be artists? El Greco, Vincent Van Gogh, J.M. Turner, John Constable, Claude Monet, Paul Gauguin, Paul Cezanne, and the Americans Andrew Wyeth, Edward Hopper and Georgia O’Keefe, to select only a few of many.

The Henry Ford College exhibition Landscapes Through Michigan Eyes hosts local Michigan artists. The exhibition’s co-curators Donald Cronkhite and Steve Glazer selected contemporary artists who work in a variety of styles and visually demonstrate how their work has been inspired by this time-tested genre. As artists continue to expand the direction images and experience take them, the landscape remains a strong contender for subject matter. I would suggest that by using scenes of nature as a way to tell a story, illustrate an idea, or conceptualize a metaphor, the genre continues to provide an outlet for artistic inventiveness. 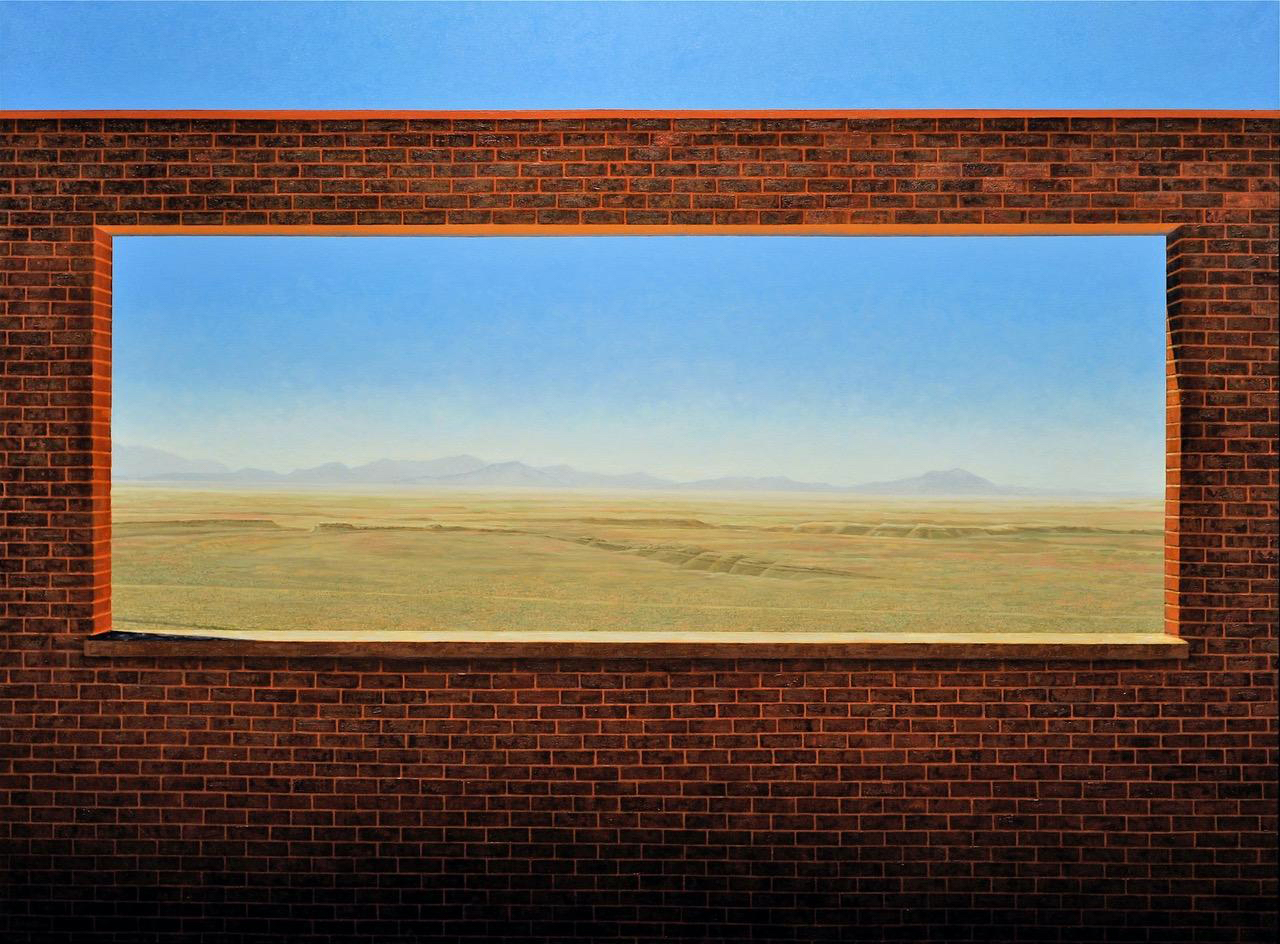 In Jim Nawara’s 40 x 54-inch oil painting titled Buena Vista, the viewer looks through a wide horizontal window of a red brick wall at a vast and arid terrain with mountains on the horizon.  What strikes me first is the concept, followed by the composition, convincing depiction of light and the subtle use of the three primary colors. It seems like an abstraction played out in the single point perspective painting that delves into magical realism when it creates this ambiguity between nature and a man-made structure. Better understood by non-Western cultures, when the viewer settles in their own experience, Nawara paints a realistic view in an unrealistic setting.

He has stated that he often prefers depopulated, nondescript or non-picturesque sources. “The subject does not need to be obviously beautiful, grand, or pristine.”

While his compositions involve the creation of illusions and allusions concerning particular places and things in the world, Nawara has said,  “I am interested in natural and unnatural visual events in landscape.  These events may be grand, unimportant, profound, or quirky.  While an image usually evolves from an actual place, the paintings are essentially abstract configurations of shape, space, color, and light that I perceive or imagine within a subject from the beginning.  Ultimately the work is about interpretation, invention, and memory, as well as the physical process of painting.  I consider subject matter a vehicle to express something ineffable, yet guided by acute observation, history, and by the inspirational works of a wide variety of fine artists, past and present.”

Jim Nawara earned a BFA degree from the Art Institute of Chicago and his MFA degree in painting at the University of Illinois, Champaign.  Nawara is a Professor Emeritus of Painting & Drawing in the James Pearson Duffy Department of Art and Art History at Wayne State University in Detroit, where he taught for forty-six years.  His paintings, drawings and prints have been exhibited in more than 250 international, national and regional group exhibitions as well as nine solo exhibitions.

When I think about the late Bill Jackson’s work, it’s the reflections of aquatic reeds and rushes in a still pond that stays with me.  Jackson was a Detroit photographer of abstraction who contributed to the community of photography immensely, most recently at the Marshall Fredericks Sculpture Museum in Saginaw, MI, with his exhibition Stillness at Dawn. Jackson’s 30 x 50-inch landscape  Tolstoy’s War and Peace takes on a daguerreotype feel of an elevated perspective of an abstract field image, but as the title suggests, he may have seen it as a metaphor for a field of war.

Jackson said, “My photography is sparse. Some images are dramatic encounters.  Others invite exploration and contemplation.  But they say no more than necessary.  I got there by going everywhere else first”.  Bill Jackson earned his Ph.D, at Monteith College, Wayne State University, and passed away last November 2018. 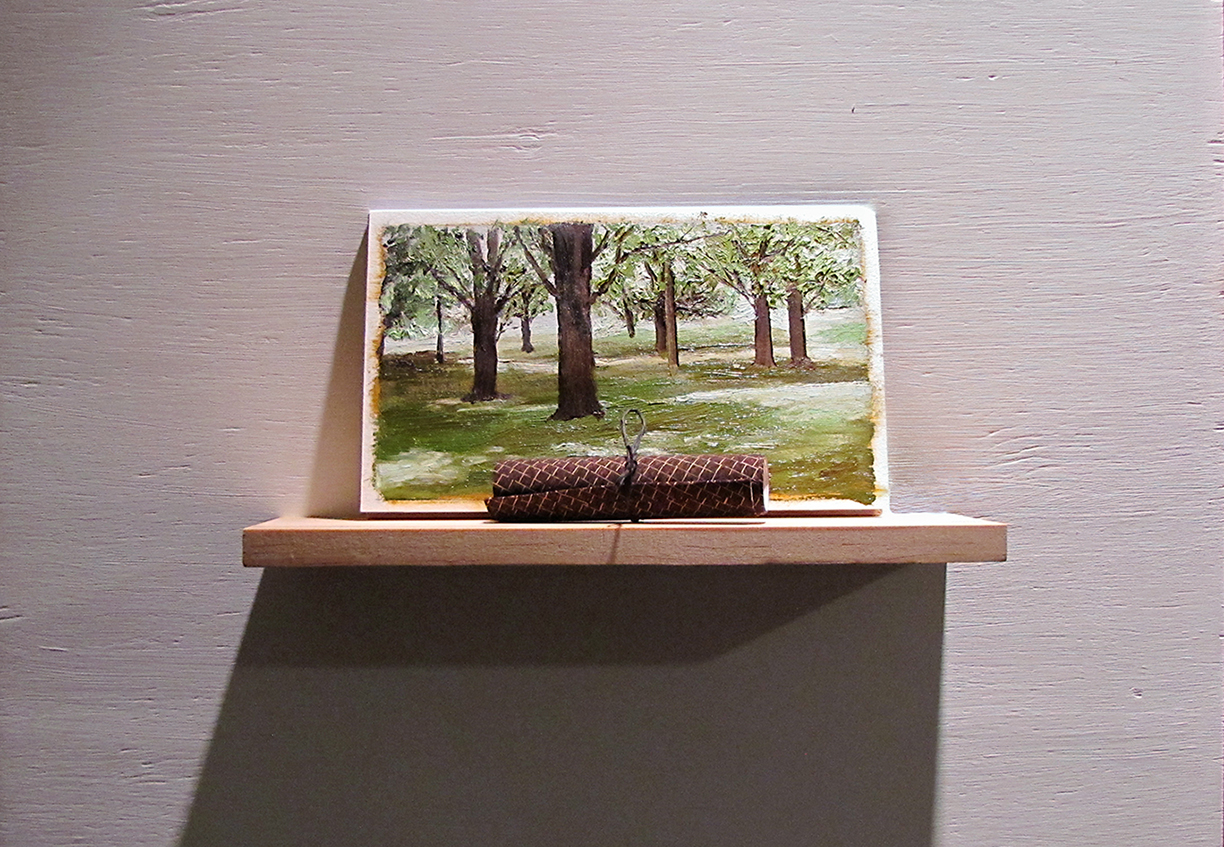 Tommy Wilson’s work has been consumed by landscape for many years as he found subject matter in rural settings and the urban environment. In each situation, he sought out strong compositions in empty houses amongst fallen dwellings, dominated by the negative space in dilapidated doors and windows. I was fortunate to see his work evolve while he completed his MFA at Wayne State University in 2017. Here in the work Stillness, he presents a watercolor of trees set on a wooden shelf with a companion scroll that pulls on the viewer’s imagination.

He says in his statement,  “As a studio artist, I work primarily with oil paint and various surfaces to capture the stories that land and urban-scapes tell. I find that these environments  share visual narratives which resonate both personal and collective truths.” 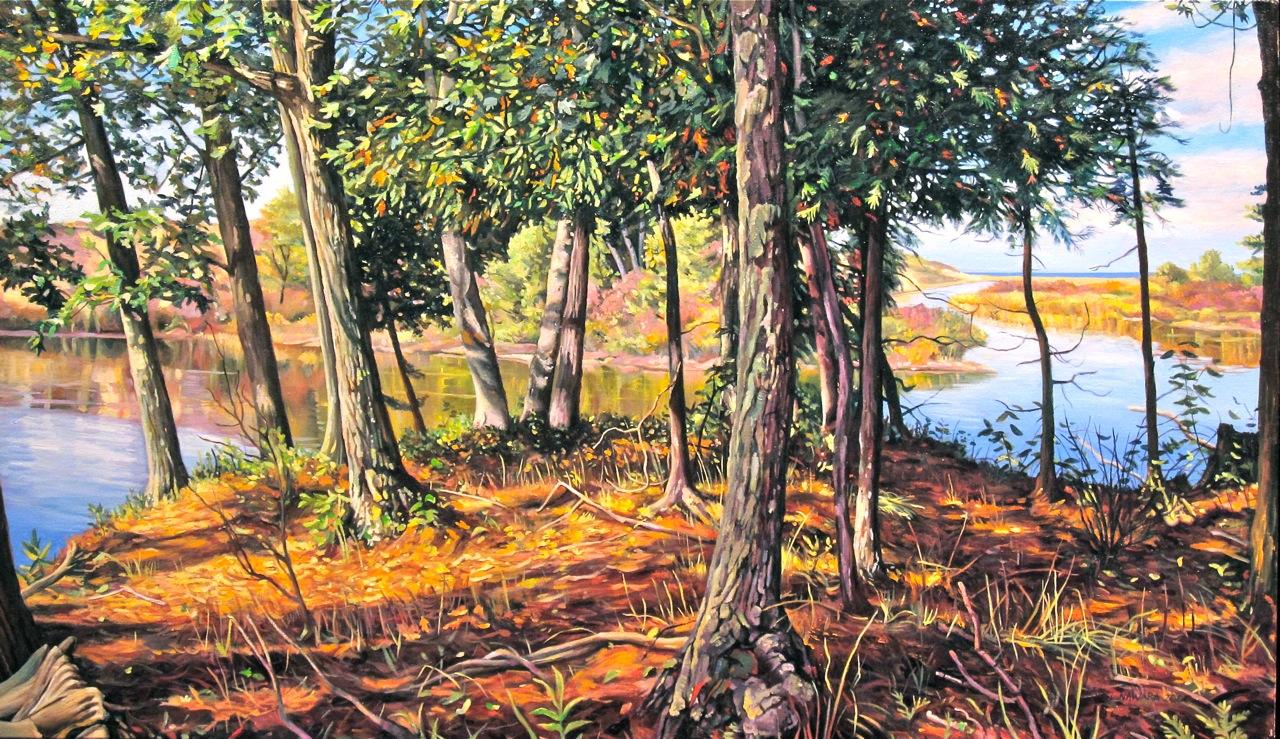 In  Lucille Nawara’s oil painting  Platte River  she brings her experience and knowledge of chiaroscuro, along with her direct observation on site.  Her composition  draws the viewer into her composition of light, color, texture, and space. The southern sunlight from the left provides strong cast shadows of the dense trees  onto the grasses on this promontory.  These energetic shadows and grasses  contrast  the  more peaceful brilliant  background dunes  and meandering river that flows into Lake Michigan on the horizon.  She says in her statement, “I sketched  directly on the canvas with blue oil paint diluted with mineral spirits, then painted this landscape  for four consecutive long days in chilly mid-October. The composition and colors were established  in situ, then later finished in the home studio with photos as reference for details.”

Lucille Procter Nawara is a Detroit-based landscape painter and printmaker. She graduated from Smith College earning a BA, spent 1 ½ years studying painting, life drawing and printmaking at Boston University, then earned a Master of Fine Arts degree from the University of Illinois, in Champaign-Urbana. She has been an assistant professor and instructor, for over 20 years, teaching drawing, painting, and design at Wayne State University, Cranbrook Academy of Art, and the College for Creative Studies in Detroit. 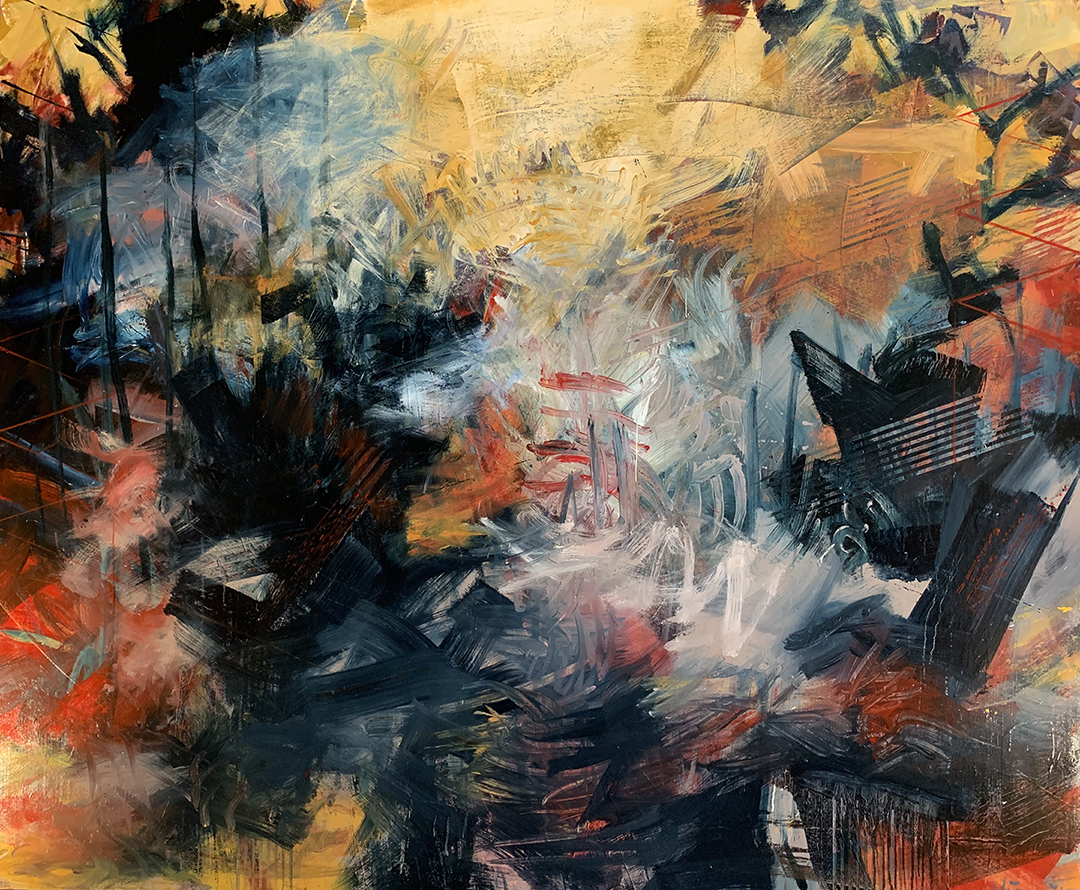 The Detroit artist Rick Vian brings his love of landscape to this lively abstract expressionistic composition, Trout Fishing in Armenia, revealed to this viewer by a knowledge of his entire body of work. Although Vian’s work over thirty years is dominated by abstraction, he has a large group of work that is derived from his time spent in the woods of the upper peninsula, an extensive collection of both drawing and large oil paintings of trees. It would seem very possible to this writer that Vian’s landscape work would surely inform the abstract work. This fiery new painting, Trout Fishing in Armenia, introduces contrasting motifs of grid lines that make the art feel fresh and exciting. Common to earlier work, Vian draws the viewer into his composition with a light source that lingers near the center, surrounded by the action of shape and complex color.

He says in his statement, “I am mostly interested in visual perception and the underlying patterns that make sense of it. I am also interested in how the visual information of this world is filtered through the mechanisms of perception, affected by thought, and emotion, resulting in expression. I start with an idea, and the painting happens in the process, I don’t really know where it’s going to go. I’m following what’s happening on the canvas, and that way, the painting will take me someplace I haven’t been before.”

Your Very Own Paradise @ OUAG