Richard Prince, who invented “rephotography” back in 1977, is still at it in 2019, apparently undeterred by any number of litigious skirmishes and accelerating technology. The 91 works on view in Portraits, his plainly titled exhibition at the Museum of Contemporary Art Detroit, have been appropriated from Instagram (IG), the mega-expanding social-media platform, founded in 2010, that now counts some 600 million plus users. That number alone offers the omnivorous Prince a mind boggling trove from which to lift, enlarge, and revamp the posts of swanning millennials and Generation Z’s from which he draws his subjects.

As curated by director Elysia Borowy-Reeder and installed in the largest of MOCAD’s galleries, the hang is an unexpectedly old fashioned one: Salon style, cheek by jowl in multiple tiers, canvases ganged nearly edge to edge, blanketing every square inch of wall space available. Moreover, the format from image to image is identical, the portrait looms at the top followed by multiple lines of text: up first is often a description drafted by the Instagrammer, then the greedily coveted tally of “likes,” #hashtags, comments from sundry “followers,” and a concluding cryptic blurb by Prince or one of his handles (@joankatzz, for example). The whopping impact of 90-plus ink jetted canvases of widely different sizes is pretty overwhelming, the antithesis of a standard line-up of worthies stationed at eye level.

Prince rather vividly narrates in a wall text and poster how the immersion in IG posts is like scurrying down a rabbit hole for hours on end following a gazillion leads, threads, and hashtags in pursuit of portrait material. In an excerpt from his journal Birdtalk, he lays out the raison d’etre of his motives and practice: “I can start out with someone I know and then check out who they follow or who’s following them, and the rabbit hole takes on an outer body experience where you suddenly look at the clock and it’s three in the morning. I end up on people’s grids that are so far removed from where I began it feels psychedelic.” 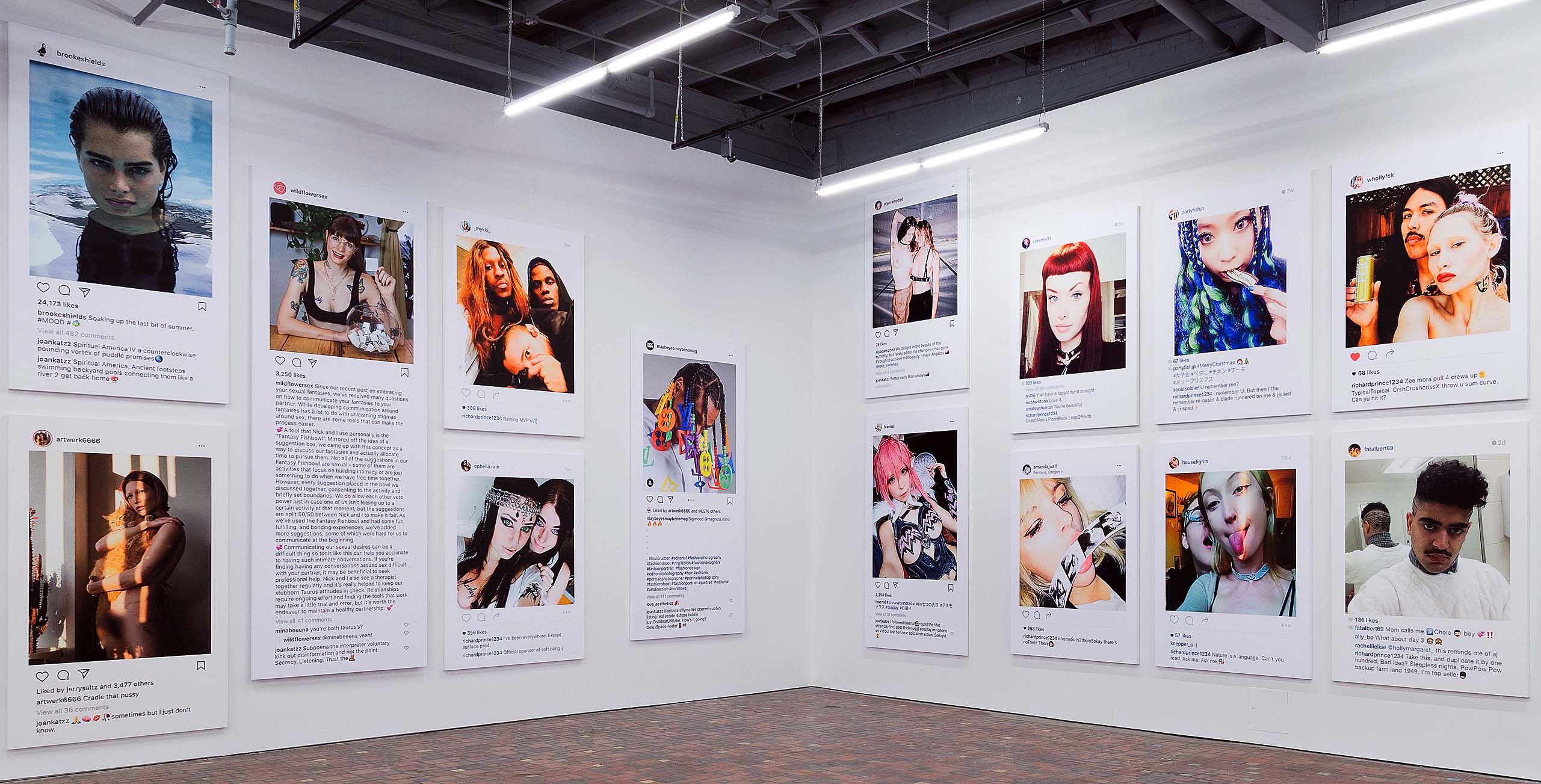 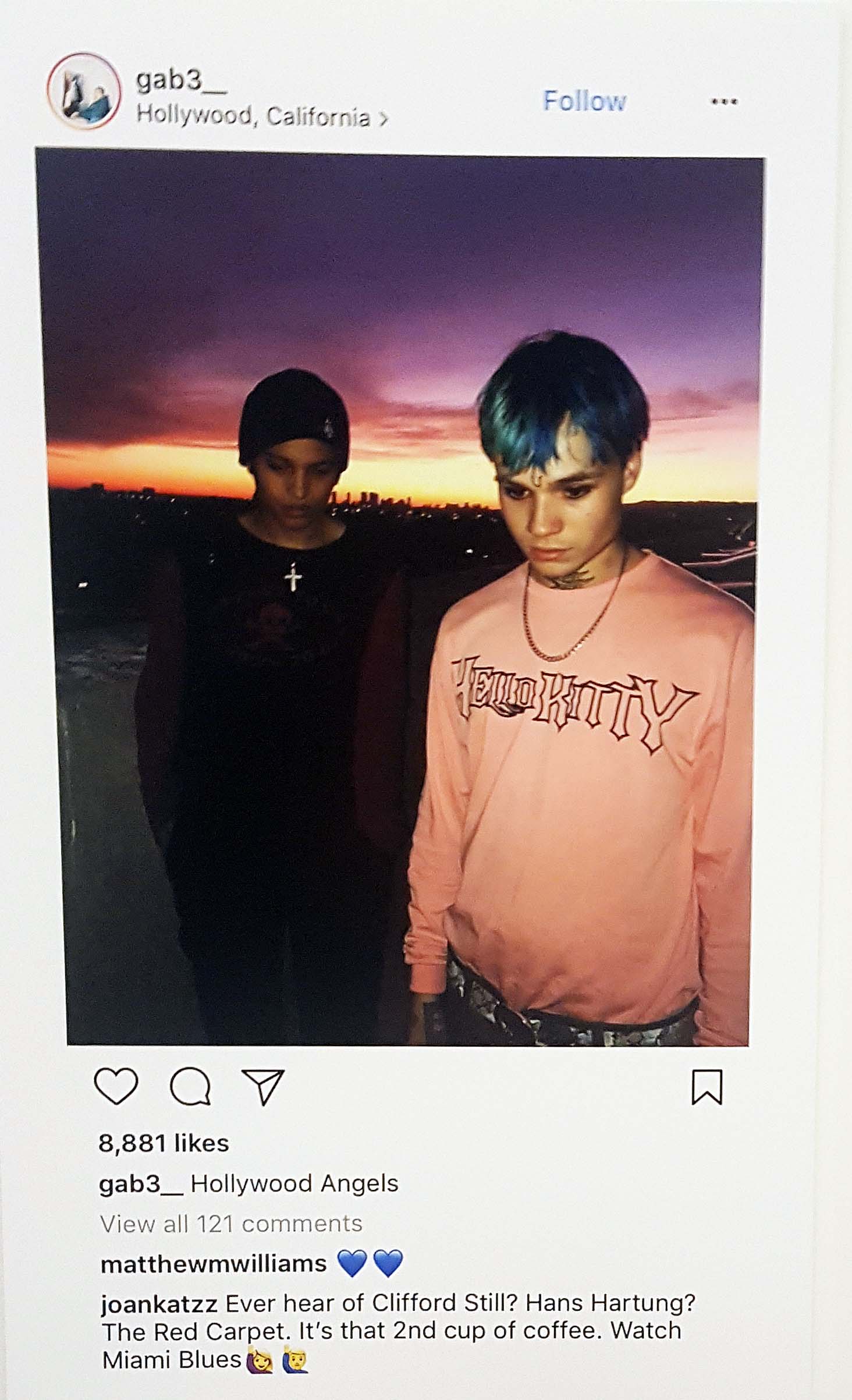 AND marvel and revel in the visual audacity, weirdness, and sexiness of poses, gestures, facial expressions, props, costumes, and locales, from @psytranceclub’s transformation into an elegant, horned human and animal hybrid to embody her belief in the bond between species, to the surreality of the necklace of shoes that circles the torso of @violetchachki, or the rarified identity between owner and pet in @katevitamin, in which both mistress and hairless cat sport blond bobs. A visitor might also be moved by the sad young men backdropped by a Los Angeles sunset in @gab3; one wears a Hello Kitty sweatshirt, the other hangs a cross on a chain over a skull emblazoned top. Alternatively, an onlooker might be swept along by @barbaraperezw, a bronzed surfer with wind-blown hair blithely skateboarding to her destination. Hair, big or razor sharp, figures in @afropunk and @fatalbert69: perhaps she calls to mind Diana Ross or Angela Davis as commentator @joankatzz snidely trolls (while also name-checking John Sinclair); and he, via a mirror, simultaneously displays both a tousled hairstyle head on and a sharply etched zig-zag design on sides and back. 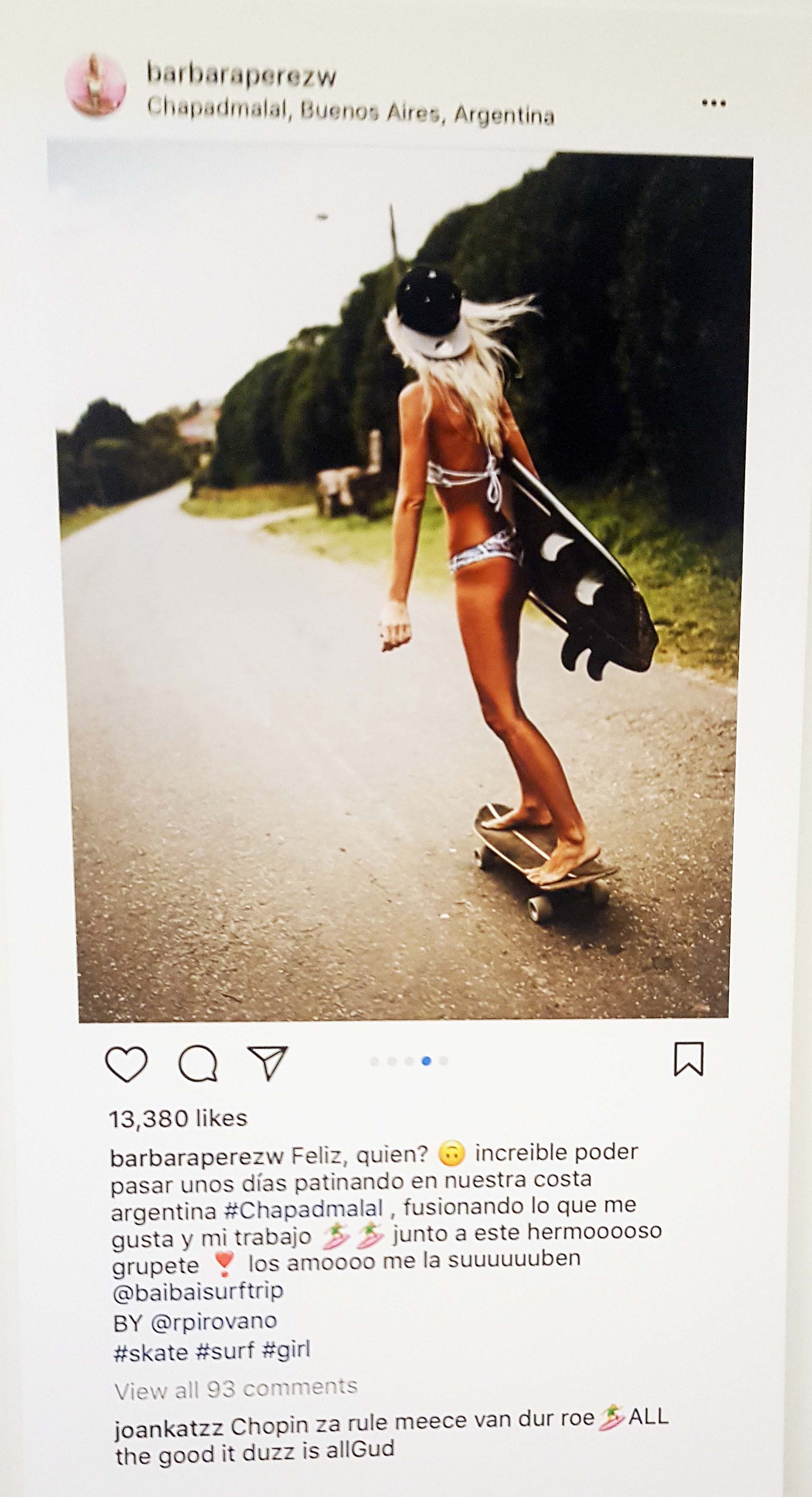 Taxing as surveying these and other abutting panels is, MOCAD’s installation and Prince’s modus operandi further ramp up the impact of Portraits.  The austere white walls of the gallery, the bright, shadow free fluorescent lighting, and the absence of any ancillary furnishings—benches, pedestals, or caption labels—plus Prince’s smooth, toothless canvas in a brilliant white–manufacture a crisp, chilly white on white perimeter. The fusion of Prince’s art and the museum’s style of display heightens the focus on the IG subculture (per Prince’s nomenclature) and the performative, narcissistic display of its followers. 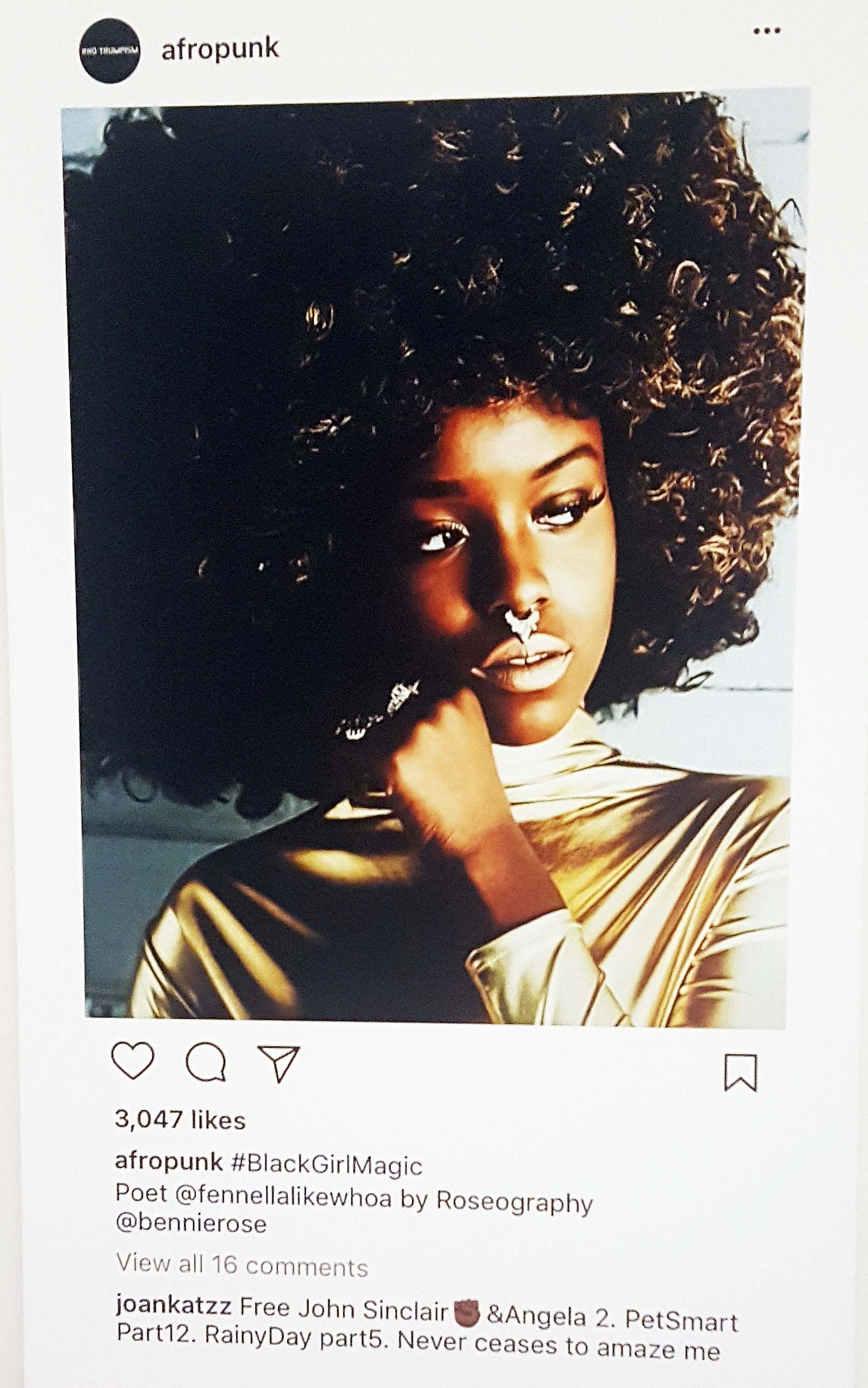 Portraits exists, simultaneously, as a group display of appropriated Instagram accounts (two thirds of and by women); and a showcase of Prince’s enlarged screenshots which he hijacked by appending strings of obscure, laconic comments; and as recollections of the portraits/self-portraits vaingloriously posted by the initial Instagrammers. That’s three shows in one generated by the umpteen intersecting and overlapping dynamics of these pieces, so it is no surprise that Prince refers to his portrait spawn as “friendly monsters.”

“Richard Prince: Portraits” remains on view at MOCAD through January 5, 2020