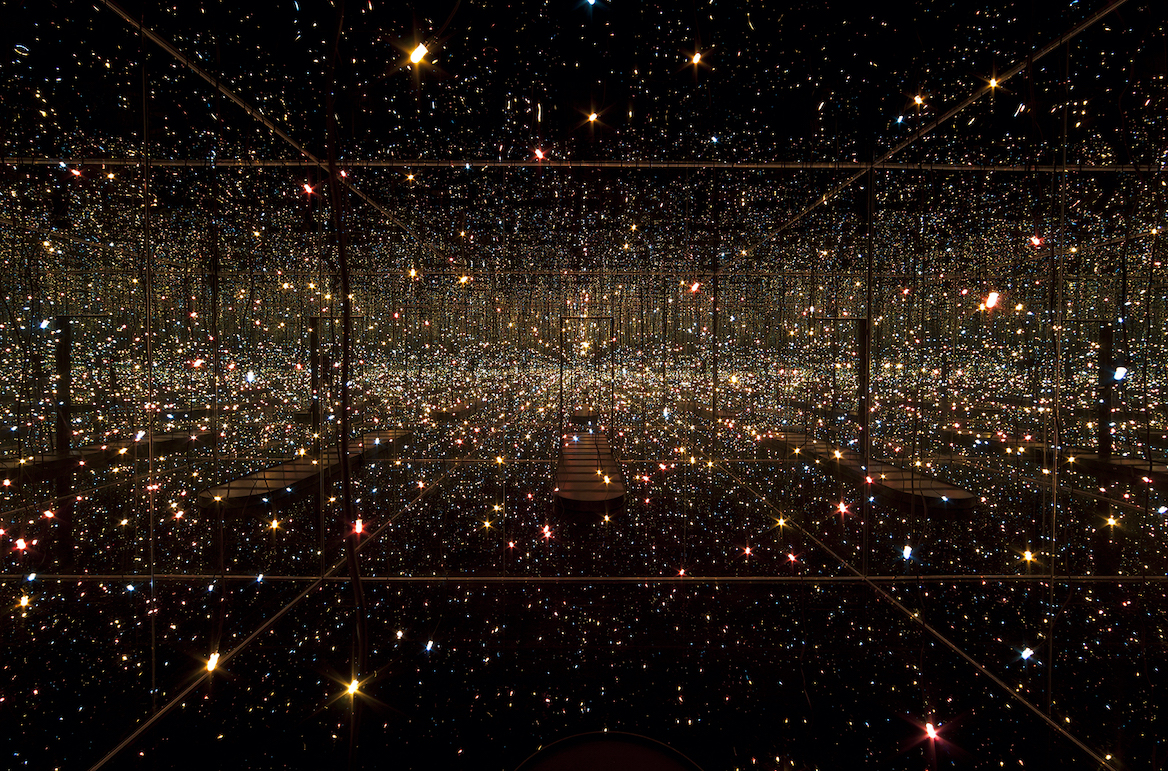 Stepping into Yayoi Kusama’s installation Fireflies on the Water at the Toledo Museum of Art is a dreamlike experience; it comes as little surprise to learn that this other-worldly sculptural environment was inspired by a childhood dream in which the artist saw a myriad of fireflies over a river on a summer night.  To experience Fireflies, visitors individually enter a darkened room in which every surface (including the floor and ceiling) reflects into infinity the tranquilly pulsating shimmers emitted by 150 tiny electric lights suspended at different heights.   The visual and sensory effect is one of floating in infinite space; the impulse is to linger, just as you might under a starry night sky, but once your allocated 60 seconds inside this space are over, you’re kindly asked to leave so the next guest can enter, and the experience lives on only as a fleeting memory.

The tranquil beauty of Fireflies belies the tenacious, fiery spirit that defined much of Kusama’s artistic career in Postwar Abstraction, which spans well over half a century.  Her parents ardently discouraged her from becoming an artist; nevertheless, while in her twenties Kusama left Japan and, in 1958, entrenched herself in New York City, the newly established capital of the art-world.  Her friends and acquaintances included Georgia O’Keefe, Donald Judd, and the surrealist Joseph Cornell.  Her early works anticipated (and very possibly even directly inspired) both the soft sculptures of Claes Oldenburg and the famously repetitive screen-prints of Andy Warhol.  During the Vietnam War, she even organized provocative nude anti-war protests in public spaces like Wall Street, the Brooklyn Bridge, the Statue of Liberty, and the Museum of Modern Art.  Her critical reputation at one time surpassed even Warhol’s, in part because of her theatrical Happenings, and may have continued to do so had she not returned to Japan in 1973, and, in the West at least, faded into comparative obscurity. 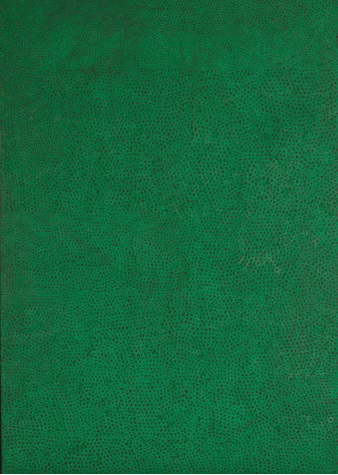 America re-discovered Kusama around the turn of the Millennium, precisely when she began re-inventing the Infinity Rooms for which she’s now most associated with.  They originate with her Infinity Net paintings of the 1960s, for which Kusama would apply a thickly impastoed net of paint onto a dark canvass, allowing the ground of the canvass to show through in the negative space as a seemingly infinite network of dots.  Breaking away from the finite confines of the canvass, she began experimenting with enclosed, mirrored environments in which whimsically colored dots and vegetal, gourd-like forms really did seem to repeat into eternal space.

Fireflies on the Water was the first in the next generation of Infinity Rooms, which, rather than playfully burst with full-intensity vibrant colors, evoke the subdued quiet stillness of a starry night.  Visitors to Fireflies stand on a small platform surrounded by water, which ripples just enough to allow the reflected lights to shimmer, though almost imperceptibly.  The lights aren’t a uniform yellow, as a firefly’s signal might be, but range from subtle yellows, reds, and blues, much like the stars.   The lights seem to extend infinitely in 360 degrees (including vertically), so the illusion is that you’re standing on a platform hovering infinitely high in indeterminate space—don’t look down…it’s quite disorienting.

It’s easy to understand the current widespread appeal of Kusama’s works; though her mirrored spaces long predate the Smartphone, they now resonate perfectly with the culture of the Instagram selfie.  Earlier this fall, the New York Times advised readers to expect a two hour wait to experience her infinity room at the David Zwirner Gallery in New York.  (It should be noted that the TMA has a timed-ticket system, and viewers won’t wait in line more than fifteen minutes.) In the hands on another artist, such an application of mirrors might conceivably be reduced to a funhouse gimmick.  But Kusama’s Fireflies is undeniably transcendent, applying the illusion of infinity a way to guide us toward thinking about eternity (and perhaps by extension, mortality), and viewers to the Toledo Museum of Art will find it well worth the fifteen minute wait to experience their own sixty seconds in Kusama’s Infinity.

Fireflies on the Water is on view at the Toledo Museum of Art through April 26, 2020