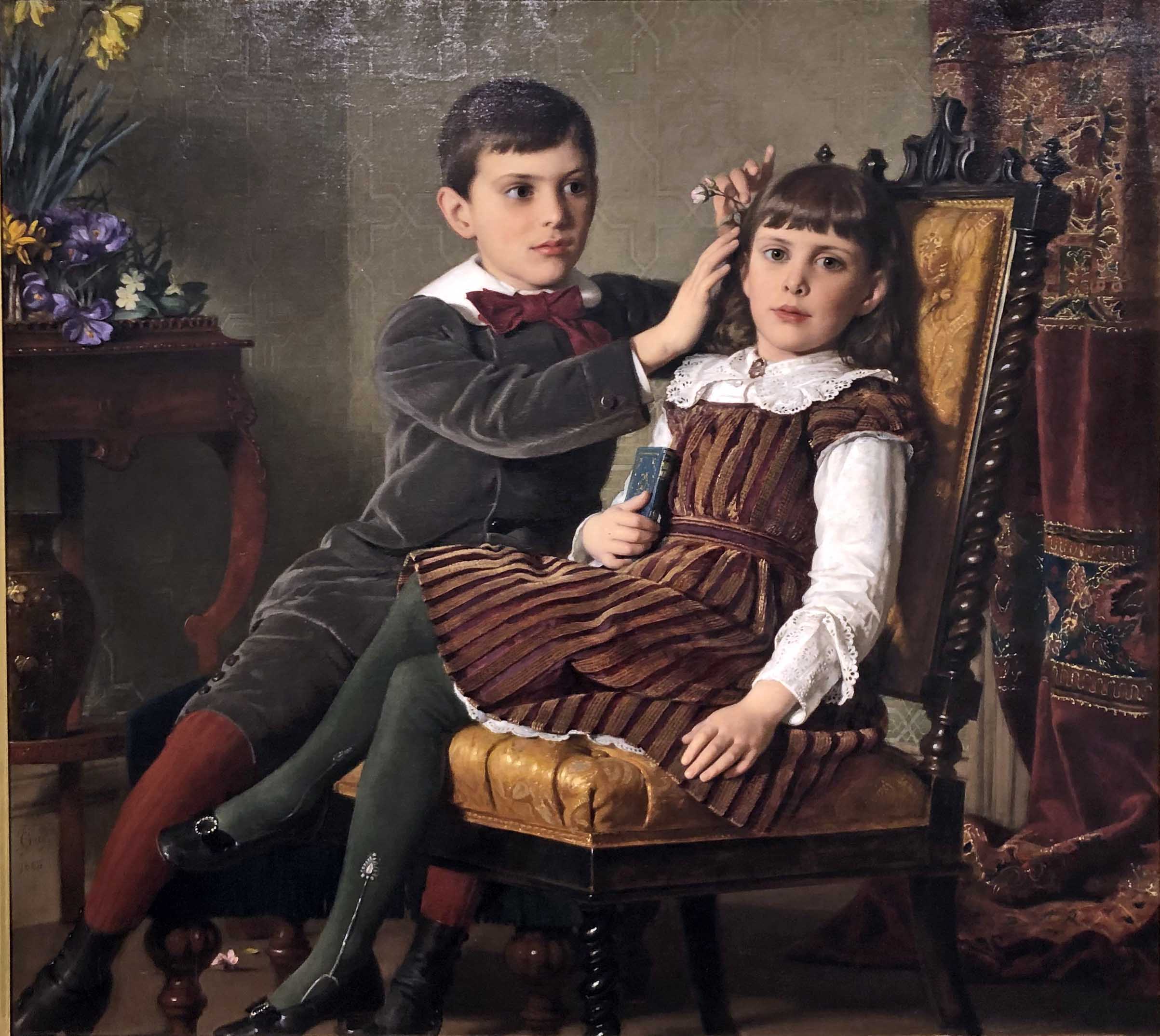 Opening January 10th, 2020, at the Oakland University Art Gallery is a traveling exhibition from the Nancy and Sean Cotton collection of American painting that captures an impression of what kind of realism was prominent in the United States, drawn from European roots and expressed in traditional in oil painting. The exhibition is sectioned off in categories: Landscape, Seascape, Cityscape, Portraiture, Still Life and Family life. Influences such as the Hudson River school or the Ashcan school of art during the late 19th or early 20th century are apparent, while also reflect influence of some of the lesser-known artists of this period. All are beautifully executed with attention to composition, light and facility.

Included in the exhibit is Interior with Children, by Seymour Joseph Guy an American born in England who studied at the Royal Academy of London and emigrated to New York City, settling in Brooklyn Heights.  He worked out of his Manhattan studio on 10th Street where he came in contact with artists William Merritt Chase, Winslow Homer and Fredrick Church. Guy was known for his family portraits and included families of distinction, such as the Vanderbilt’s. 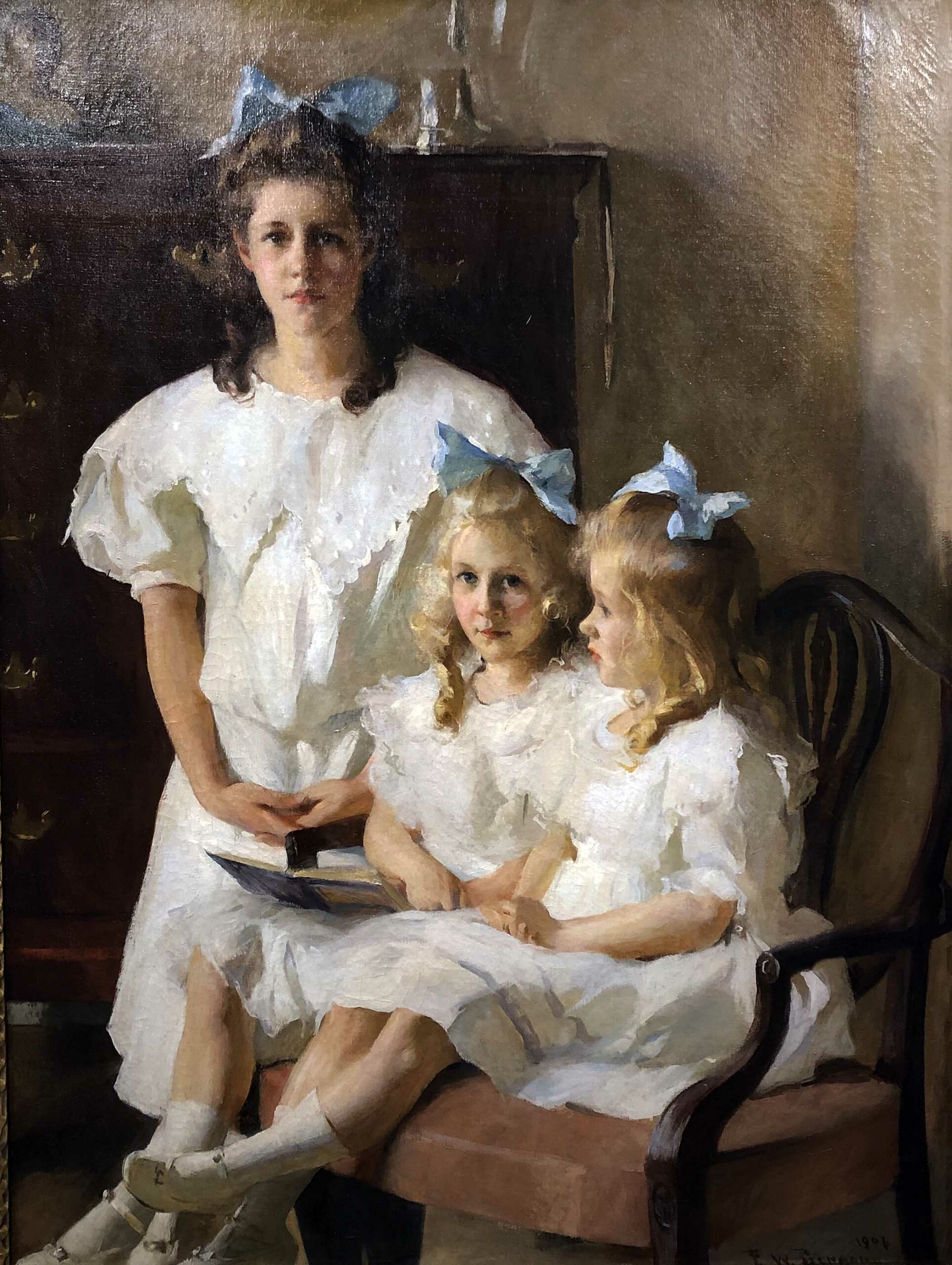 Frank Weston Benson was an American from Salem, Massachusetts, known for his realistic portraits.  Sometimes referred to as an American Impressionist, he studied at the School of the Museum of Fine Arts Boston and later traveled to Paris to study with Académie Julian.  Here in this painting, Three Children,1907, he is drawn to light from a window on the left, perhaps an influence of Vermeer, with two of the girls looking at the viewer while the third girl gazes out the window. The Detroit Club purchased Benson’s Figure in a Room, but at some time during the next several decades, the painting was replaced on the Club’s premises by an excellent forgery, which was inserted into the painting’s original frame. 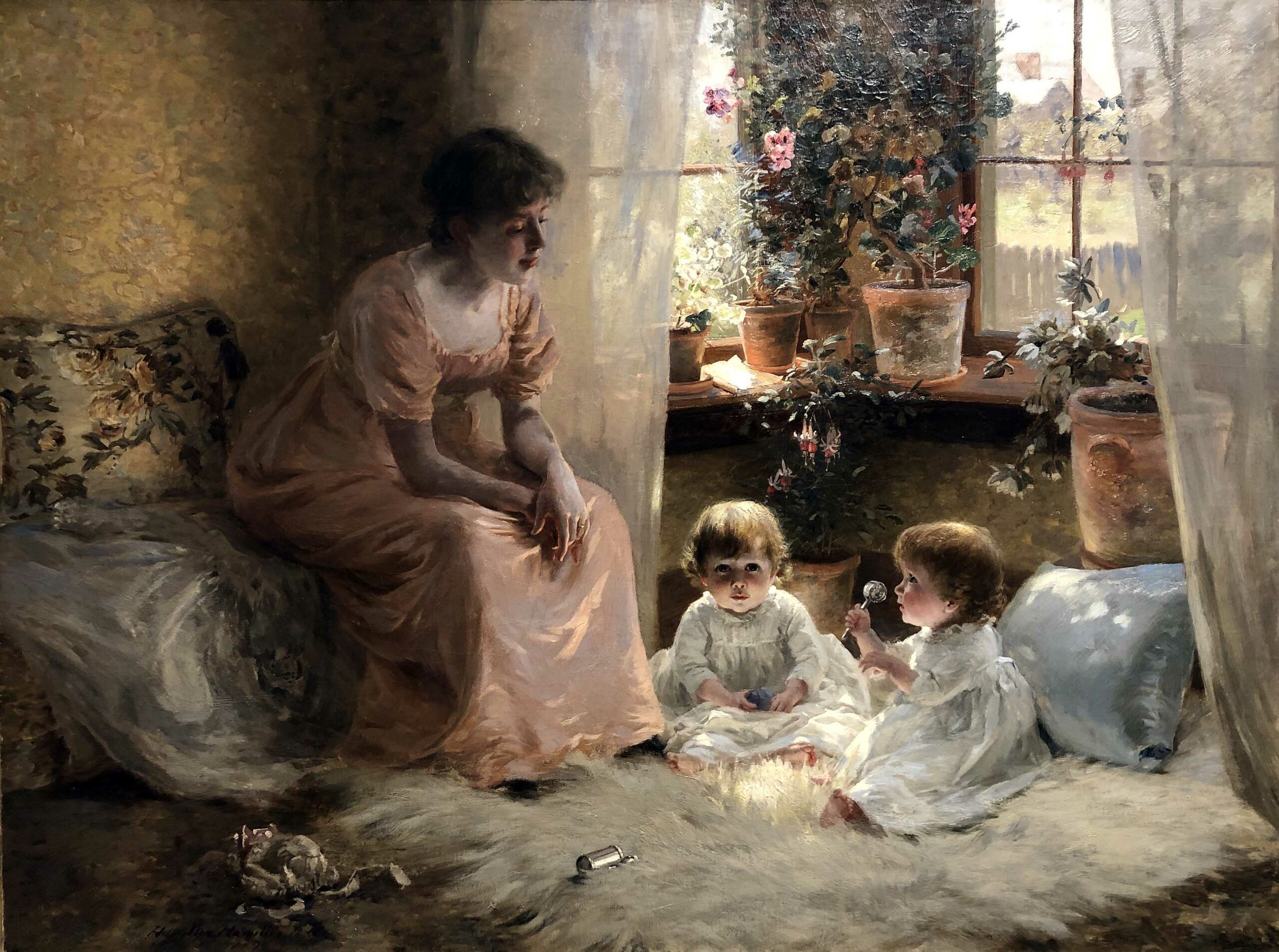 Hamilton Hamilton was born in Oxford, England, but emigrated to Buffalo, New York where he painted alongside Barbizon School Painters, and is best known for his landscape paintings of the American West. In the work, The Silver Rattle, 1890, he draws on natural light from a sitting room window with the gaze of the young girl in the middle of the composition. The reflected light on the subject’s faces and the hands of the young mother bring forward a particularly attractive element in this group portrait. 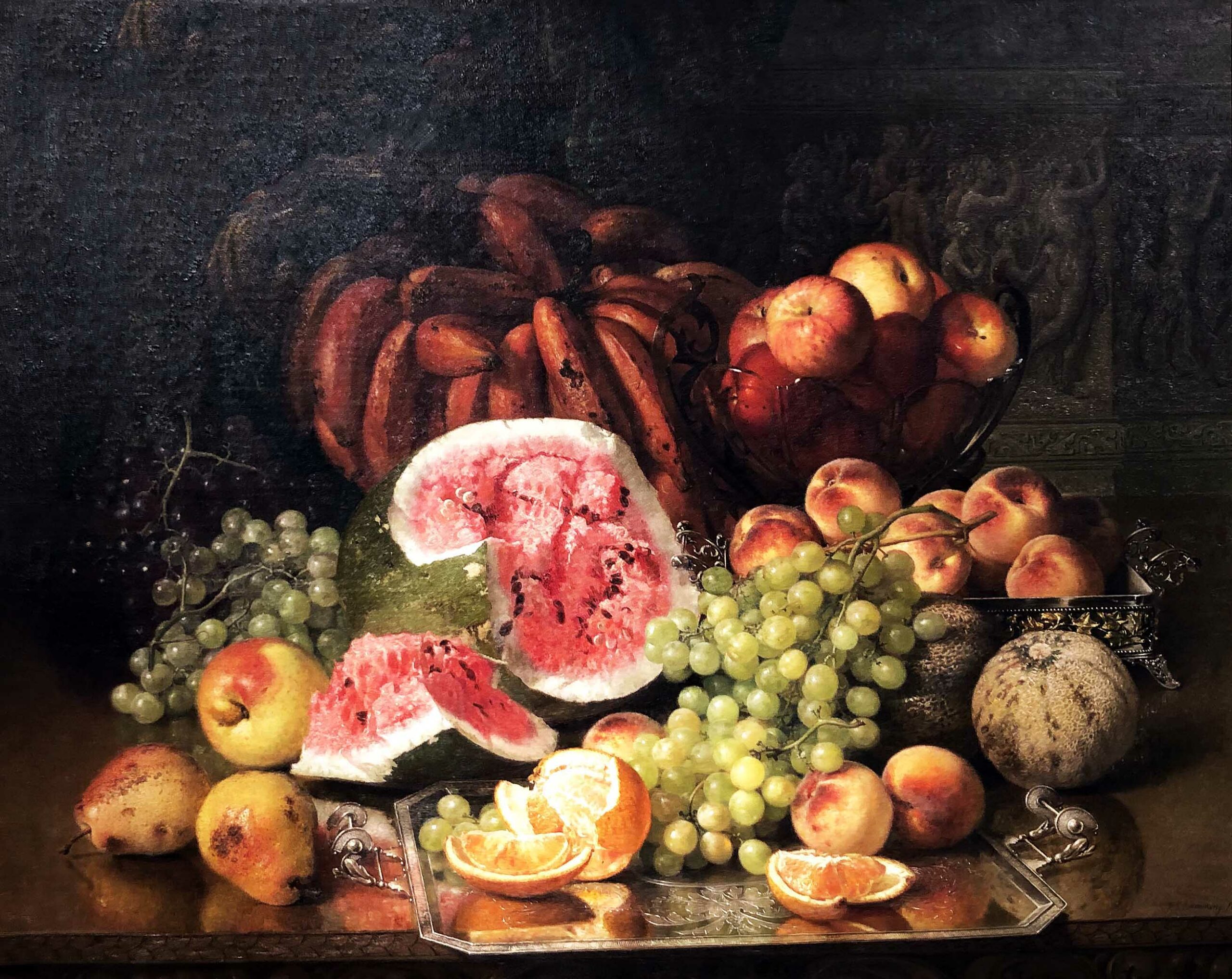 What might have been called a dining-room still-life painting, this work by Robert Spear Dunning, A Fruit Picture, 1887, depicts a display of exotic fruits upon an opulent serving tray. The painting was created for the textile industrialist, Moses Pierce from Norwich, Connecticut.  During this time period, these fruits were considered luxury items in New England, due to the shipping conditions of bananas and such. Historically, it is noted that Pierce left his fortune to train teachers for the African-American schools of the South. During his lifetime, Dunning enjoyed a long and successful career with his chosen specialty, Still Life. A century after his death, the memory of his life and work has been obscured because of the inferior status that still life has historically occupied in the hierarchy of “important” types of painting.

The son of a well-to-do ironworks owner, Sanford Gifford, grew up in Hudson, New York, and studied at Brown University.  Gifford traveled to Europe and was influenced by the tonality of the Barbizon school of landscape painting.  Like most Hudson River school artists, Gifford traveled extensively to find scenic landscapes to sketch and paint. He returned to New York and worked out of the 10th Street studio building for the rest of his life, spending time with Frederic Church and George Yewell. The single point perspective painting, The Beach at Coney Island, 1866, relies on space and reflection to grab the viewer. The Detroit Institute of Arts has Kaaterskill Falls, 1871, as part of their collection. 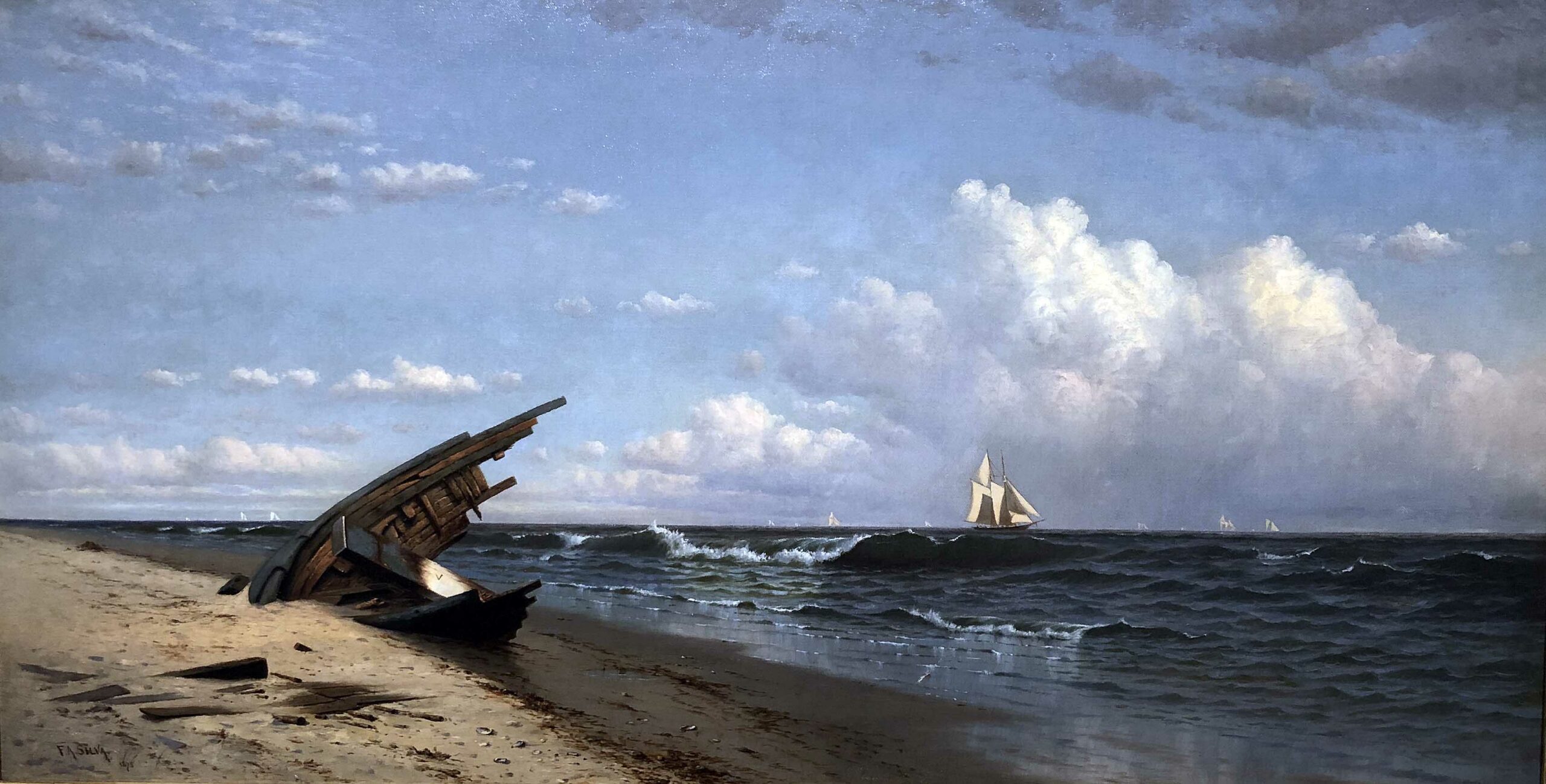 Francis Augustus Silva began his career as a sign painter, and after serving in the American Civil War, he first exhibited his work at the National Academy of Design and the Brooklyn Art Association. Silva’s carefully constructed compositions are known for their sense of diminishing perspective. His paintings are equally known for their sense of tranquility and a poetic, almost nostalgic quality. The painting, Schooner “Progress” Wrecked at Coney Island, illustrates another phase in Silva’s development, a shift from the purely geographic to more narrative storytelling. 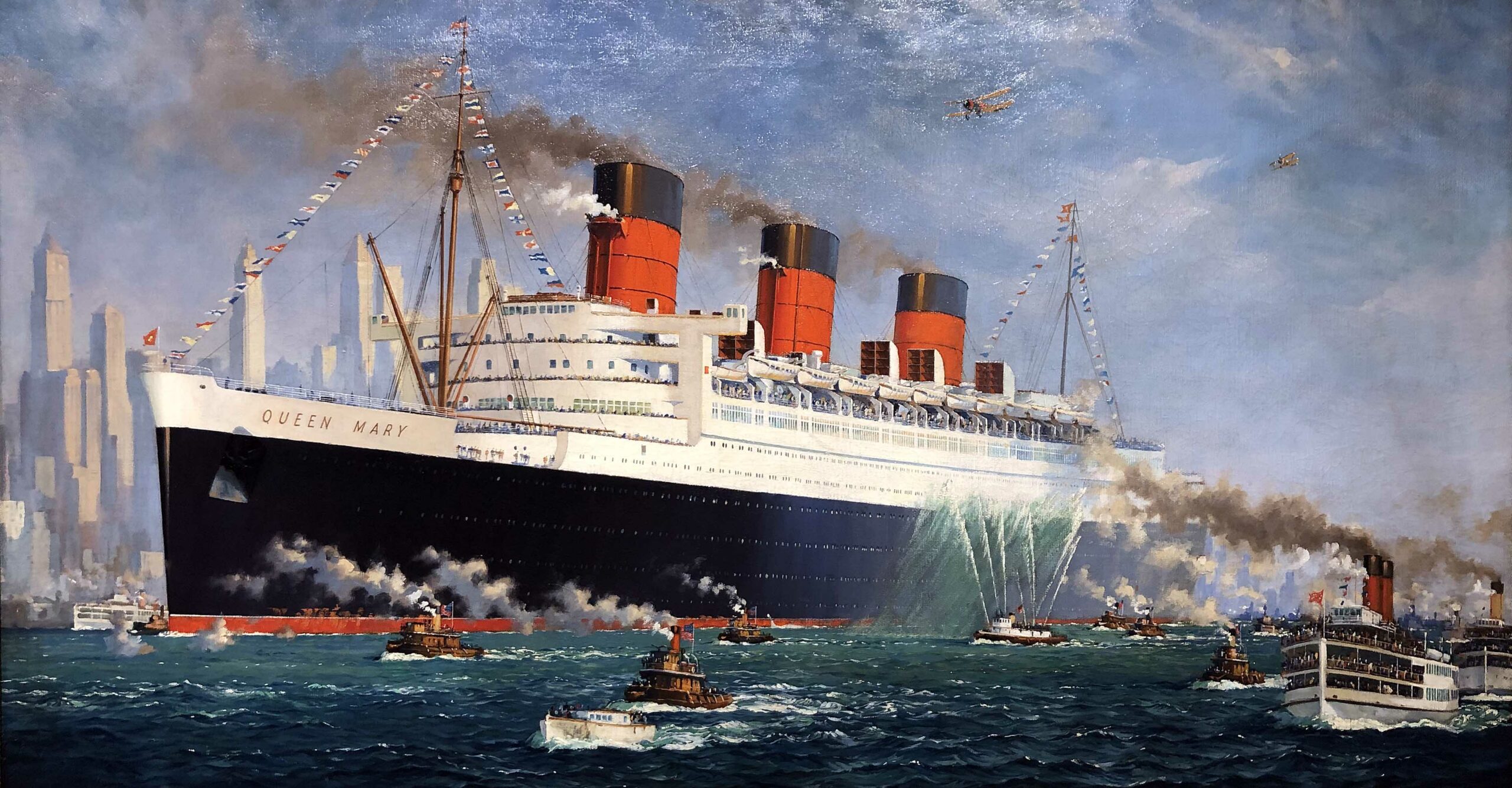 William John Patton McDowell, an American considered a  British Impressionist, was born in 1889 and spent most of his life on nautical themes.  He painted the Queen Mary multiple times and here depicts the boat arriving in New York City harbor with an array of tugs and onlookers. 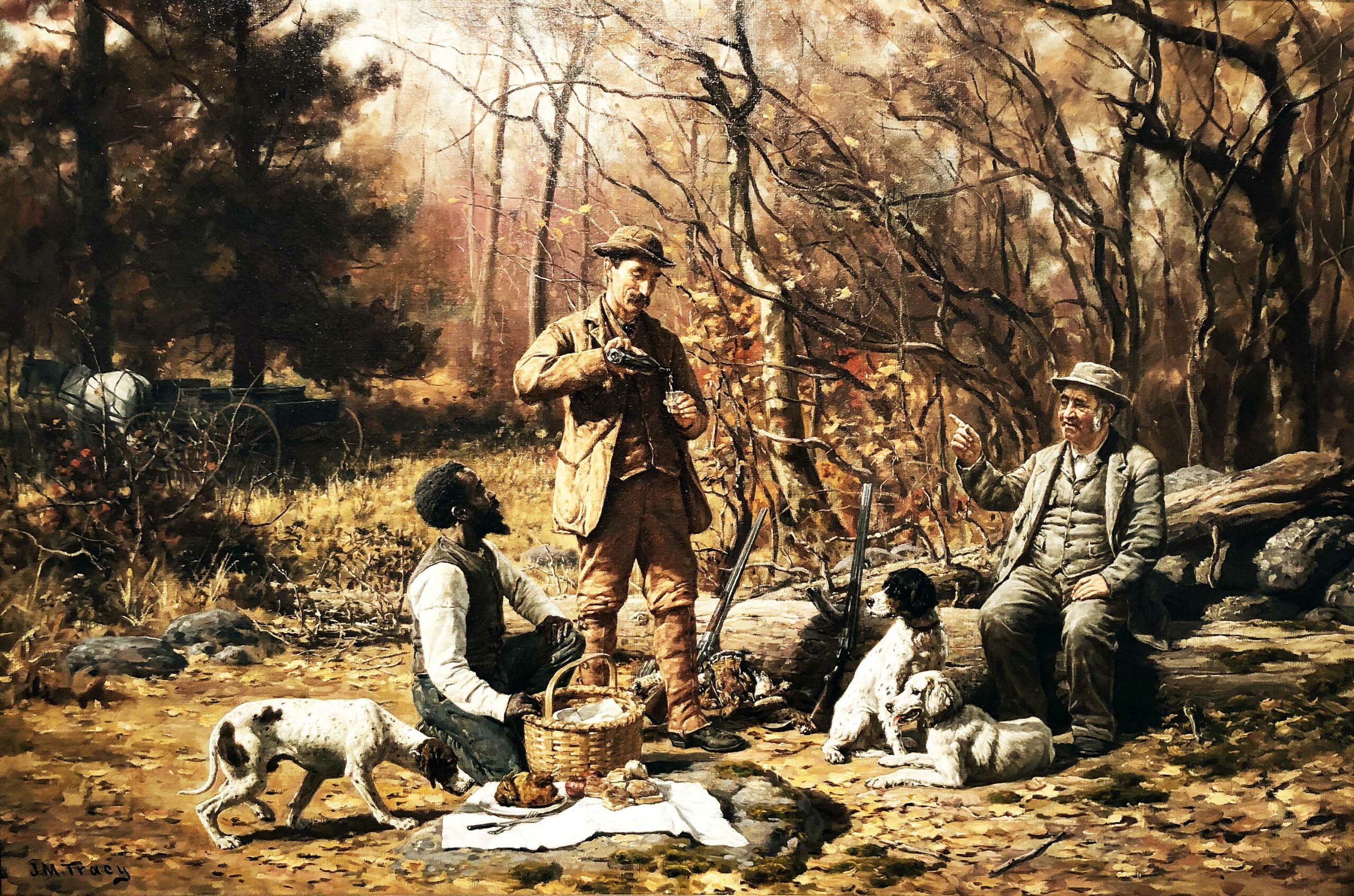 John Martin Tracy, Lunch in the Field, Oil on Canvas, 1885

John Martin Tracy was a Mayflower descendant born in Rochester, Ohio, and his father was an abolitionist who was killed in an anti-slavery riot before the artist’s birth.  In this work, Lunch in a Field, the African American man depicted in a kneeling position, perhaps carrying lunch for the hunters, reflects the “separate but equal” Jim Crow laws as an expression of the artist’s dismay of the conditions. The 13th Amendment to the Constitution became law in 1865, and we see the work is dated 1885, reflecting artist’s disapproval. Tracy eventually enrolled at the École des Beaux-Arts from 1867–1868 and studied in the progressive atelier of the French portrait master Carolus-Duran. Tracy’s full-length portrait of his wife was exhibited in the Paris Salon of 1874, marking a stylistic transition from romantic landscapes to portraiture. 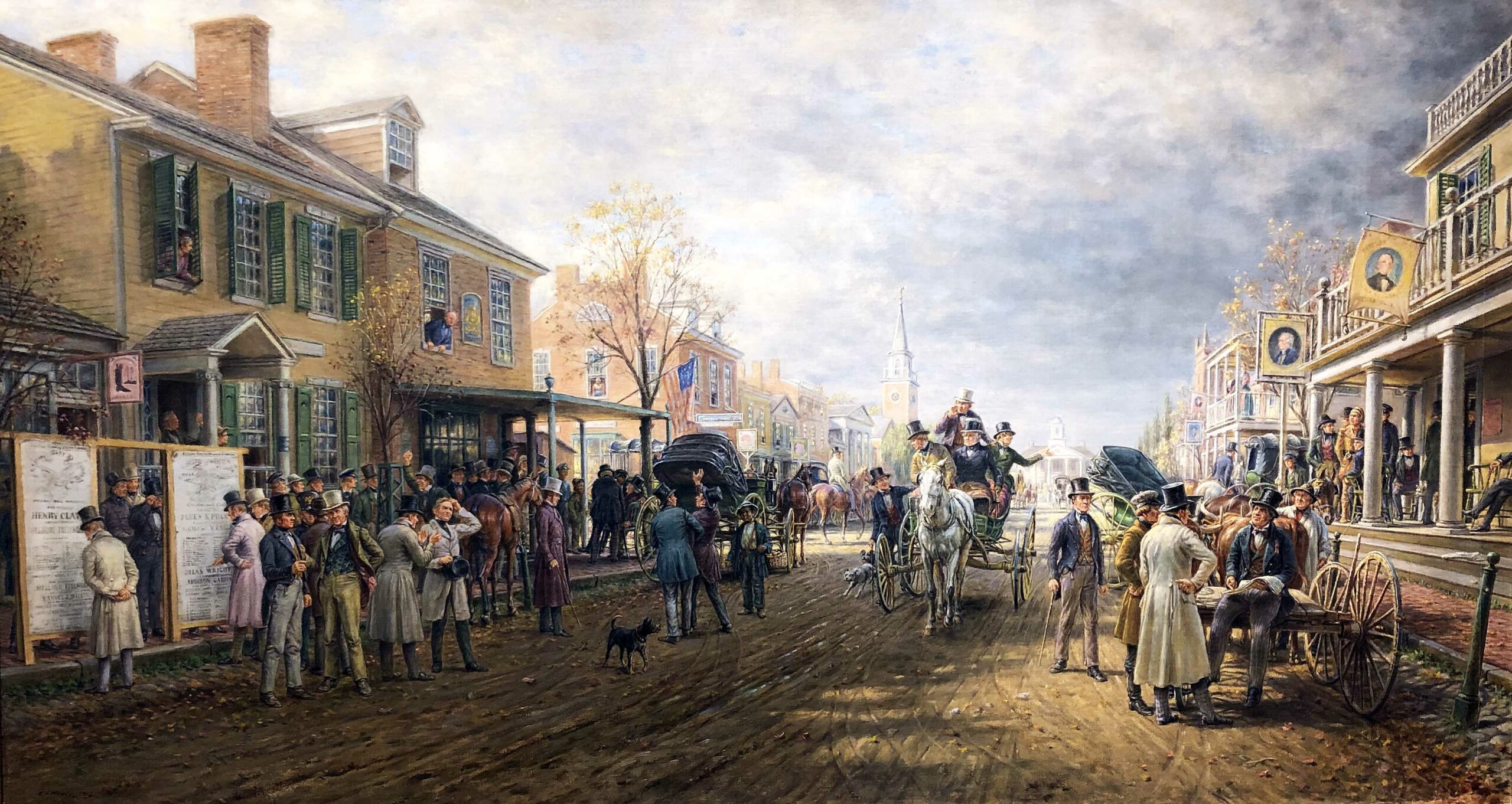 The artist Edward Lamson Henry worked in a Union transport ship during the Civil War and later established a studio in Greenwich Village.  In the work, Election Day, 1844, an African American child stands in the center of the painting as the world swirls around him.  The election-year of 1844 was consequential because James K. Polk became president and paved the way to the issues that involved slavery. Henry moved to New York City as a child and eventually began his study of art at the Pennsylvania Academy of Fine Arts in Philadelphia. He also moved into the 10th Street studio along with Winslow Homer in 1862.

Largely absent from the collection is the presence of lower-class working people and people of color: the men, women and children that powered the expanding American industrial complex.

This kind of exhibition is healthy for an audience to see, as we experience the fact that figure painting is well and alive today, and can serve a purpose in the expressionary work of today’s practicing artists.

American Paintings from the Nancy and Sean Cotton Collection, 1850–1940 at Oakland University Art Gallery through April 5, 2020.