Queen: From The Collection of CCH Pounder on exhibition at the Charles H. Wright Museum of African American History 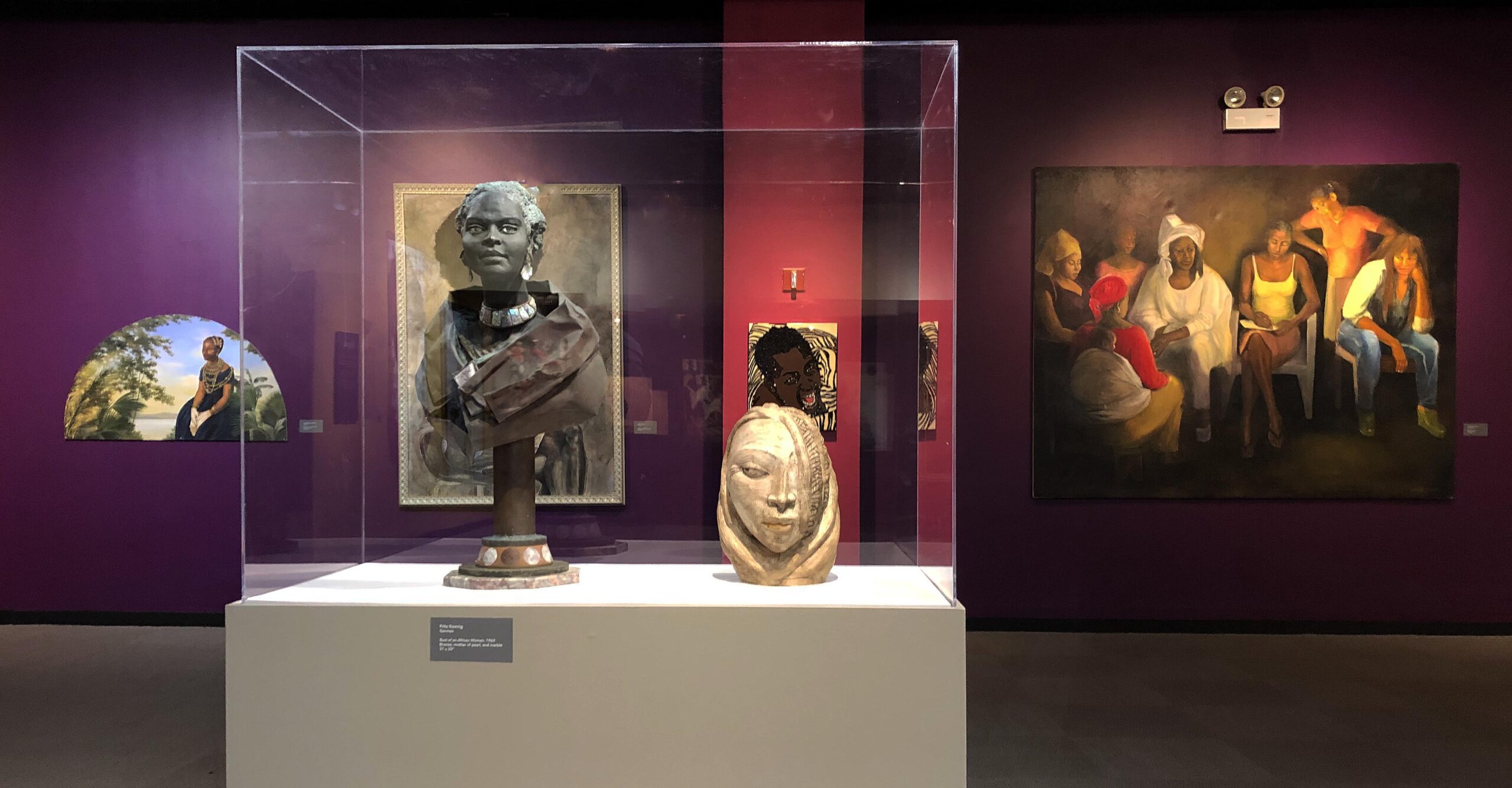 “This looks like a movie set,” exclaimed a youthful voice. The brown boy was on a school trip to the Charles H. Wright Museum of African American History and expressed his awe and excitement as he and classmates swirled through the ‘Queen’ exhibit.

A movie set? I could see that. When you enter the AT&T Gallery at the Wright, there is a richness  in the collection and a feeling that you’re in the presence of stars.

On loan to the museum by award-winning actress and avid art collector CCH Pounder ( NCIS: New Orleans), the pieces are from her private collection and during my visit, (prior to Gov. Whitaker’s ‘Stay at Home’ executive order due to the vast spread of COVID-19), the Wright had recently received a new visual bringing the exhibition to a total of 53 artworks that explore Black women across four themes: beauty, agency, strength and dignity. The makers of the paintings, mixed-media installations and sculptures are artists from across the African Diaspora.

Curated by Sarah Anita Clunis, Ph.D., from Xavier University of Louisiana,  “Beauty” opens the gallery space and immediately I am fascinated with Willow Moon  by the late Jamaican painter and mixed-media artist, Tamara Natalie Madden. The woman’s brown skin brushed with rich golden hues and highlights of oranges and reds is illuminating. The definition of the collar bone teases the subject’s soft sensuousness. 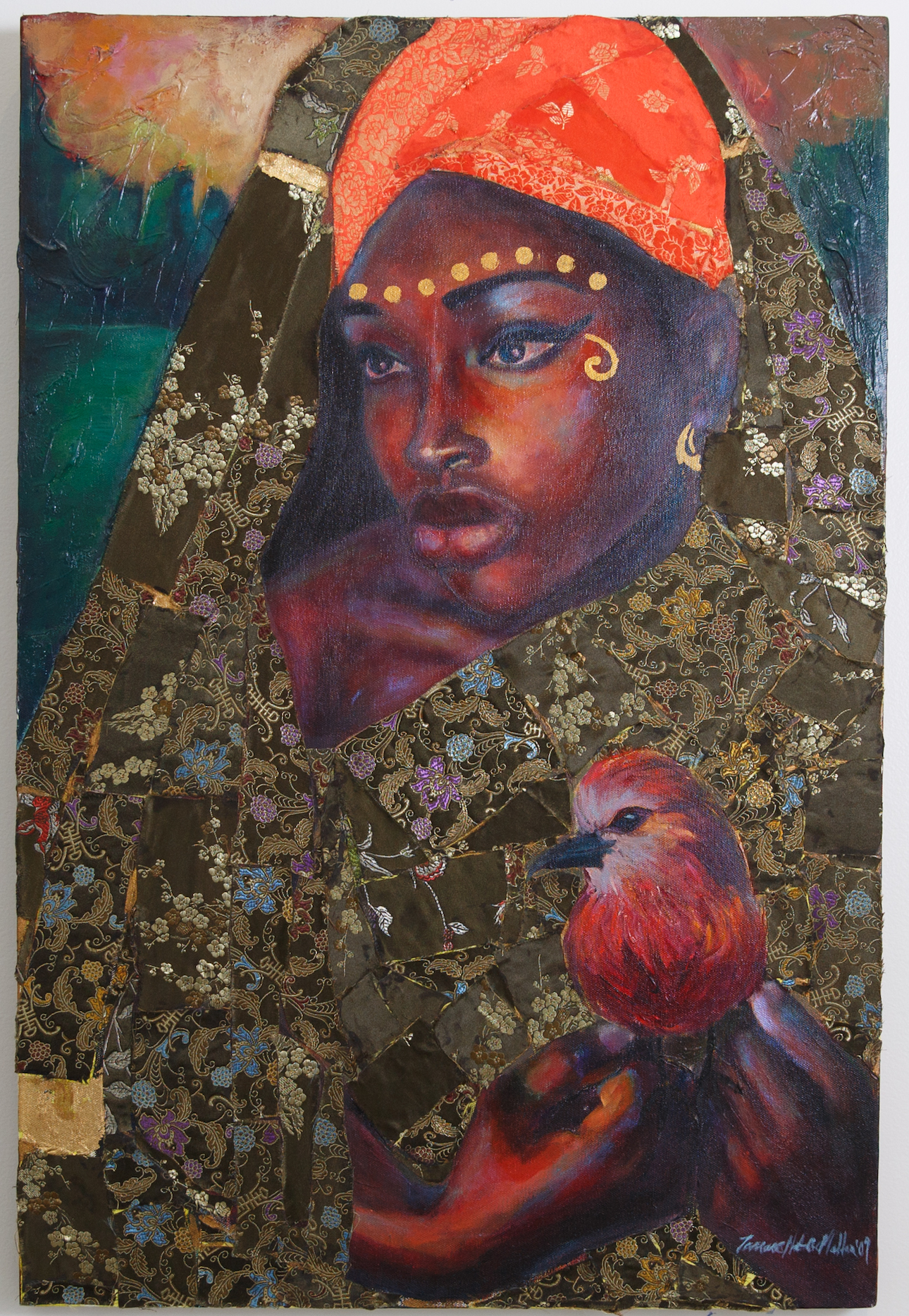 In Madden’s work, allegories are significant. There’s a mirrored likeness between the woman and the bird perched on her fingers, from the color palette to the focused gaze in their curled eyes. The bird cameo (a staple in Madden’s paintings) represents struggle, survival and freedom – an offering of the makers’ personal story and battle with a rare form of cancer that led to her passing in 2017. The body is adorned by a quilt with intricately designed fabrics. This attention given to the detailed threads is a compliment to Madden’s Jamaican roots where quilting is a form of familial storytelling and clothing complements one’s essential beauty. An aura is projected evoking a message of divine femininity.

Steve Prince’s Angela, Messenger of God follows this artistic motif in relation to spirit and divinity. The hoop earrings and afro puffs make Angela’s spiritual prowess relatable to the everyday girl. Her posture is bold yet relaxed and absent of worry while owning space and possibly controlling the elements surrounding her. The grayscale drawing is symbolically complex but there’s evidence of floating hearts, stretched out hands, and feminine-structured silhouettes. The motion and rhythm in Prince’s line strokes appear as guided spirits dancing amid the stillness of “the messenger.” 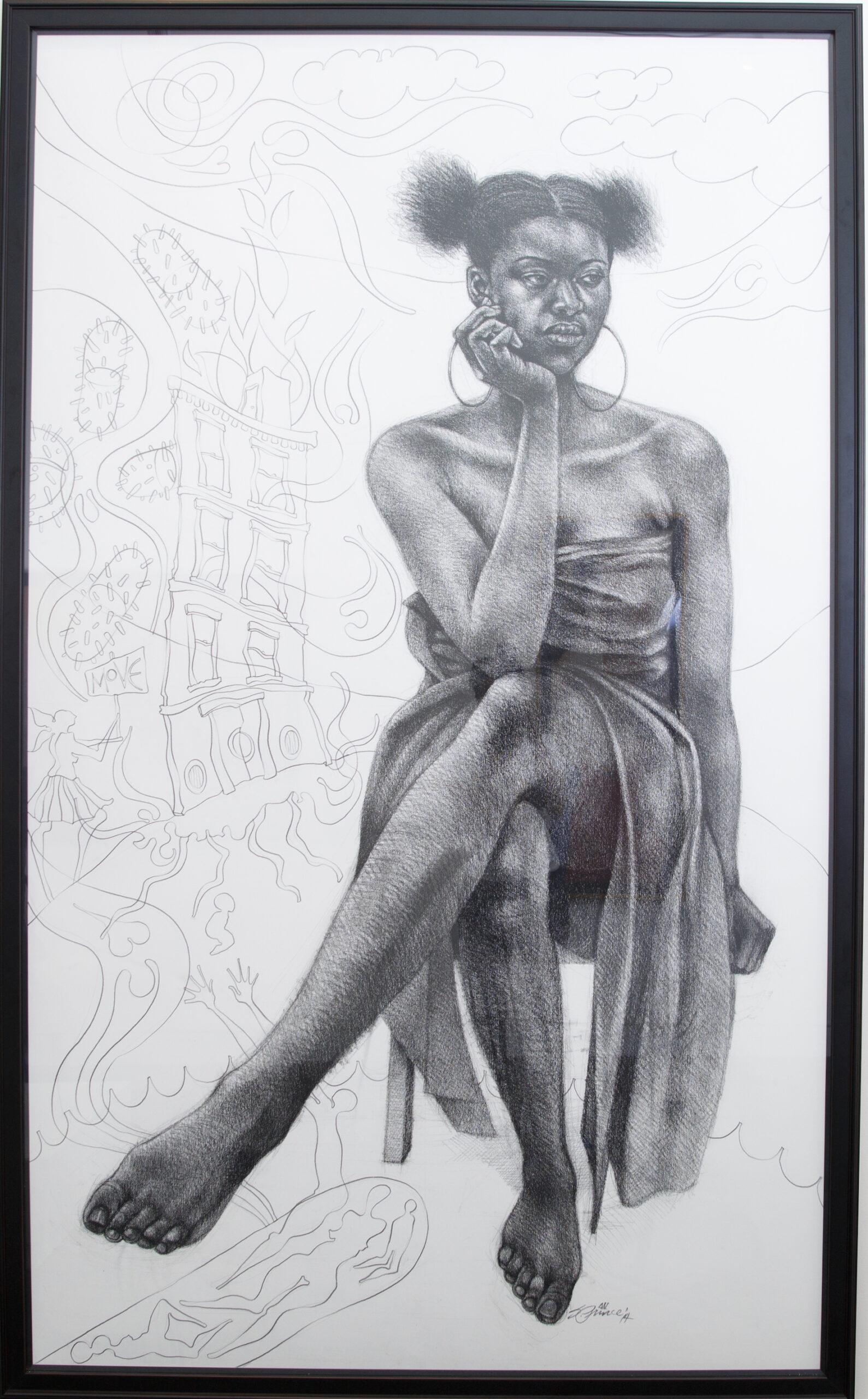 A loving and nurturing essence exudes in Earth Mother, a charcoal rendering by Yrneh Gabon Brown. Originally part of Brown’s installation, Memba Mi Tell Yu (Listen Up, Take Note) that addresses climate change and the effect it has on the California ecosystem, respect and care for the environment is represented in this work. She is a source of life, spirituality and healing. She is soft but not fragile and always a warrior. 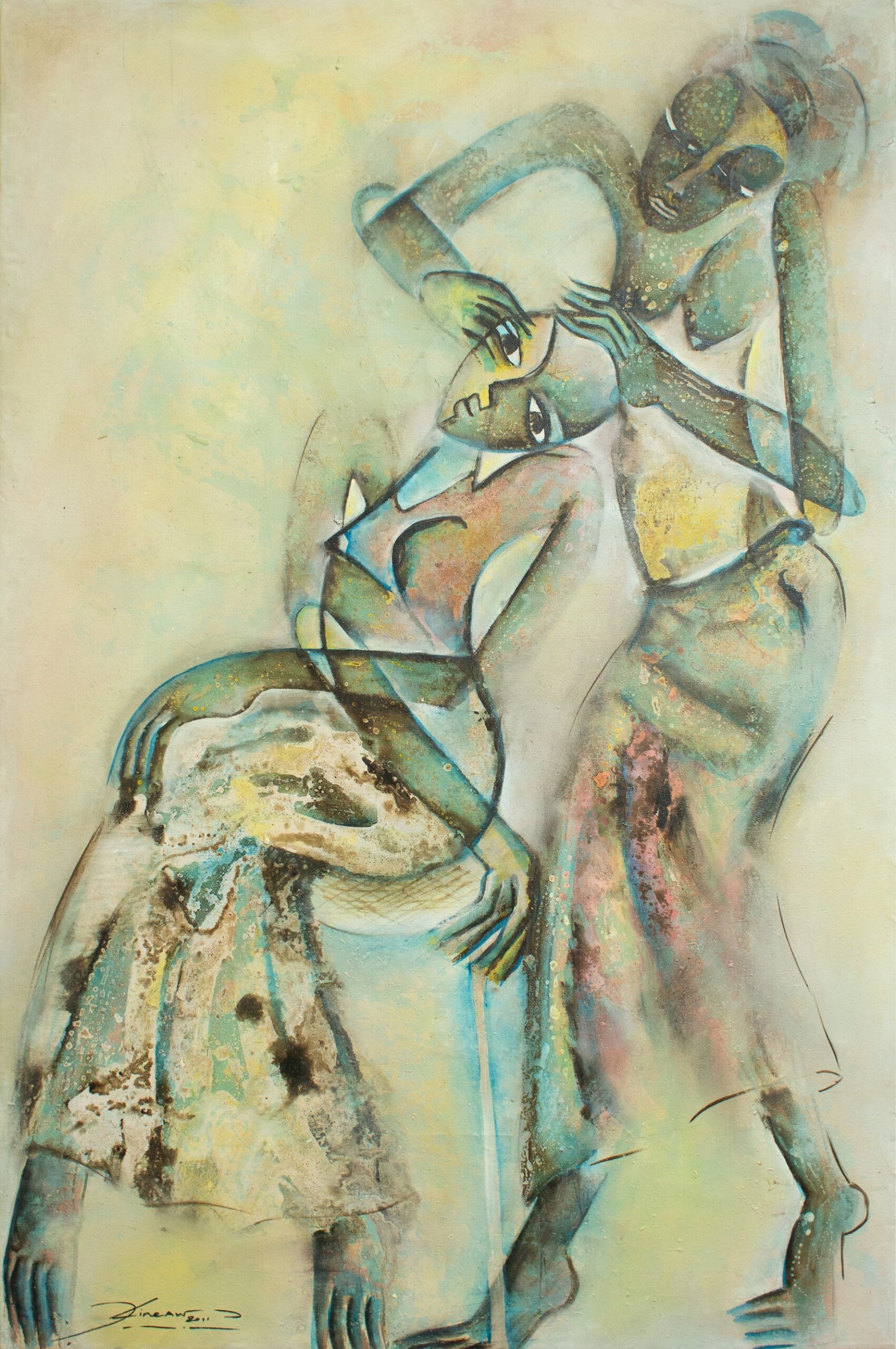 Memories of going to the hair salon  prompted my liking of Coiffeur;  the coming-of-age essence of getting your hair done in momma’s kitchen and as we got older, your homegirl’s house and eventually graduating to the physical salon or “shop”. The flowy, cool colors and swaying nature of body posture in Kine Aw’s painting feels like a breezy Saturday afternoon among sisters, not necessarily by blood but cultural kinship. 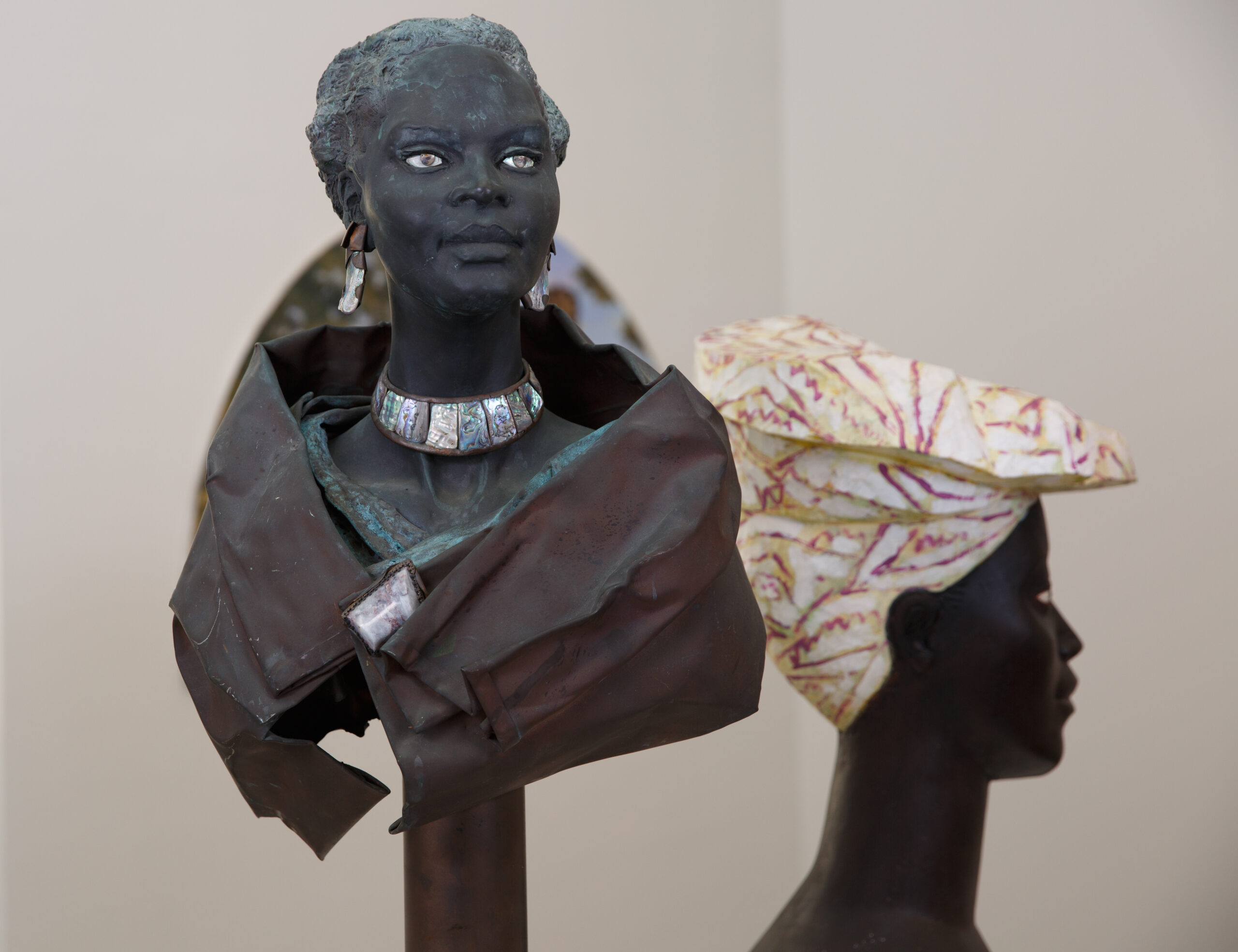 When considering agency, and occupancy of space, women of color have often felt unwelcomed and isolated. The idea that women, Black women specifically, are not enough is an obsolete ideology that is debunked throughout the exhibition. The  slight smile and lifted chin, regal stones, sophisticated clothing and oozing confidence in Bust of an African Woman speaks to ancestry and legacy. With imagination at play, this is my grandmother dressed to mingle and socialize with her peers. The story has a simple theme: dignity.

If I were to create a soundtrack to this exhibition, I’d blend album cuts from Lauryn Hill’s The Miseducation of Lauryn Hill, Jamila Woods’ Legacy! Legacy!  and Rapsody’s Eve, making a bold musical gumbo that feeds the soul with honesty, vulnerability and revelation about the depths of womanhood and the Black experience. The artwork for its release would be Harmonia Rosales’ The Birth of Oshun. The intricately detailed  painting is rooted in traditional Nigerian storytelling and shifts the narrative of Sandro Botticelli’s The Birth of Venus, an early renaissance rendering that depicts a white Venus with white Angels flying among her.

Rosales, a contextually clever artist, centers Oshun, painted nude with gold patches representative of the goddesses’ vitiligo, in a seashell surrounded by water and Black angels. The visual is aesthetically appealing and reels you in to the arrival of a deity–pure, sacred and powerful. 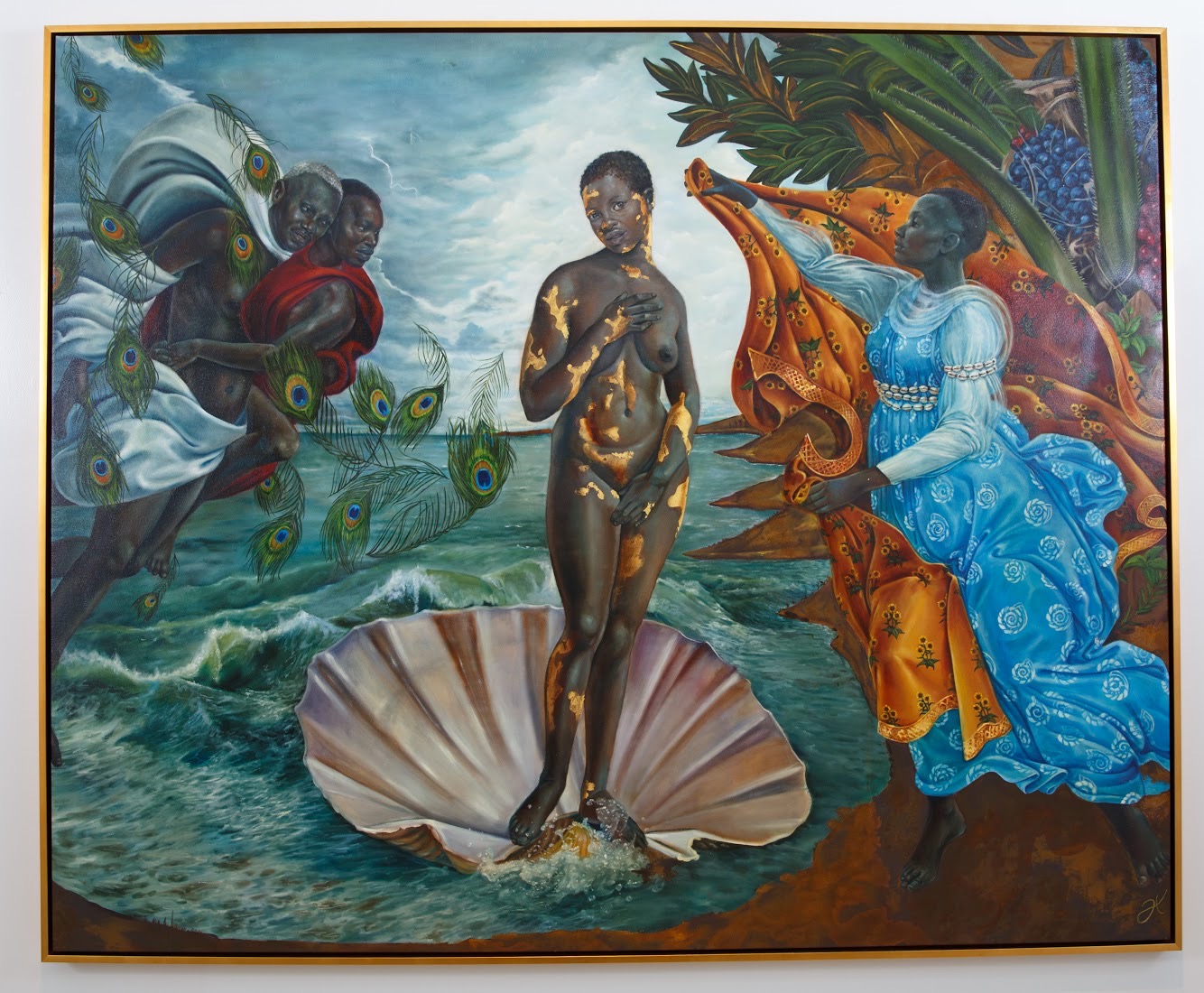 ‘Queen’ is a visceral experience. The collection encourages the viewer to connect with history, appreciate the present, and admire beauty. We’re taken around the globe with an open invitation to experience a cohesive and complex story that celebrates femininity, identity, power and makings of the Black woman. Perhaps, revealing to the young brown boy visiting with his class that melanated women are indeed, movie star status. 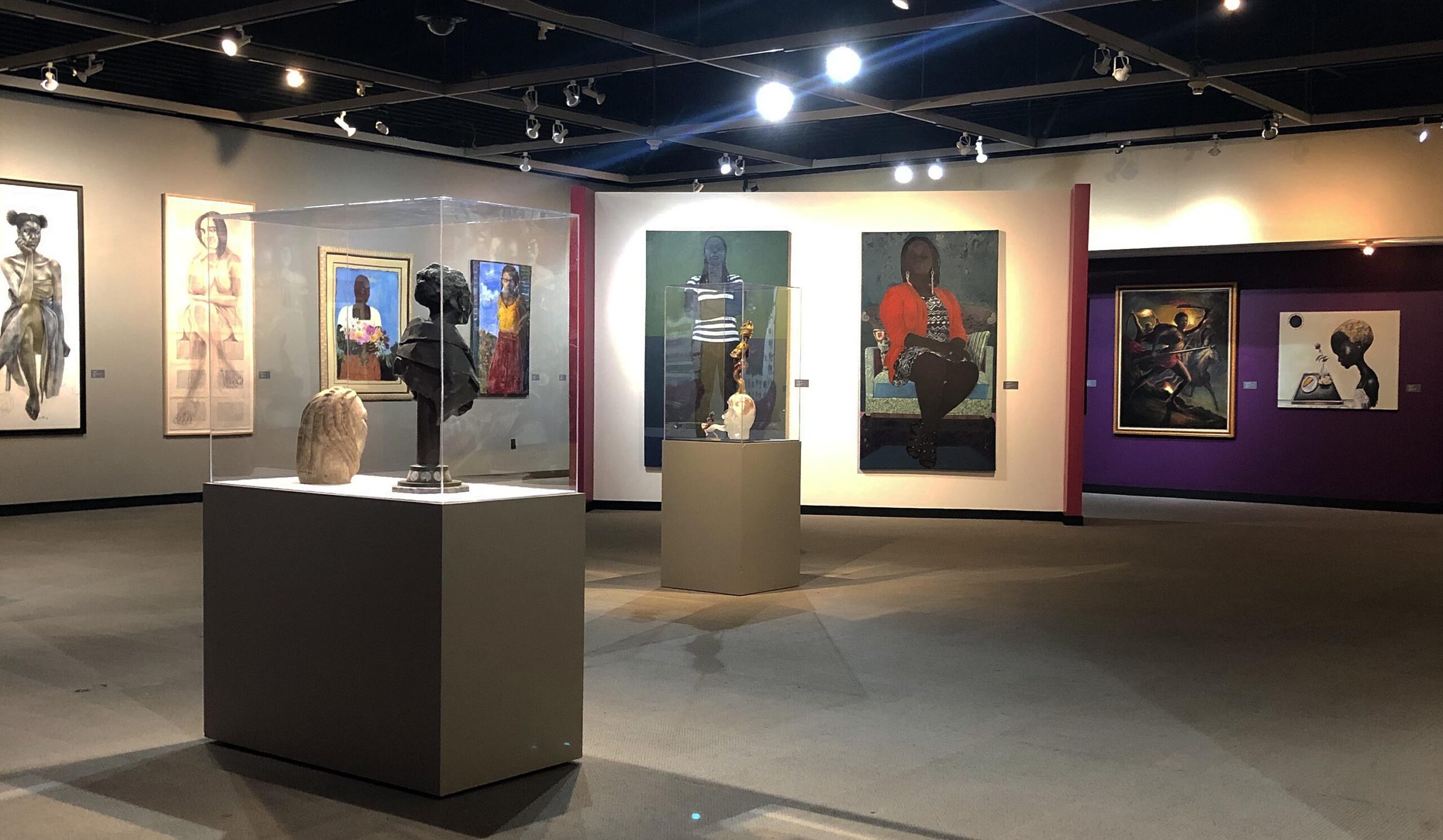