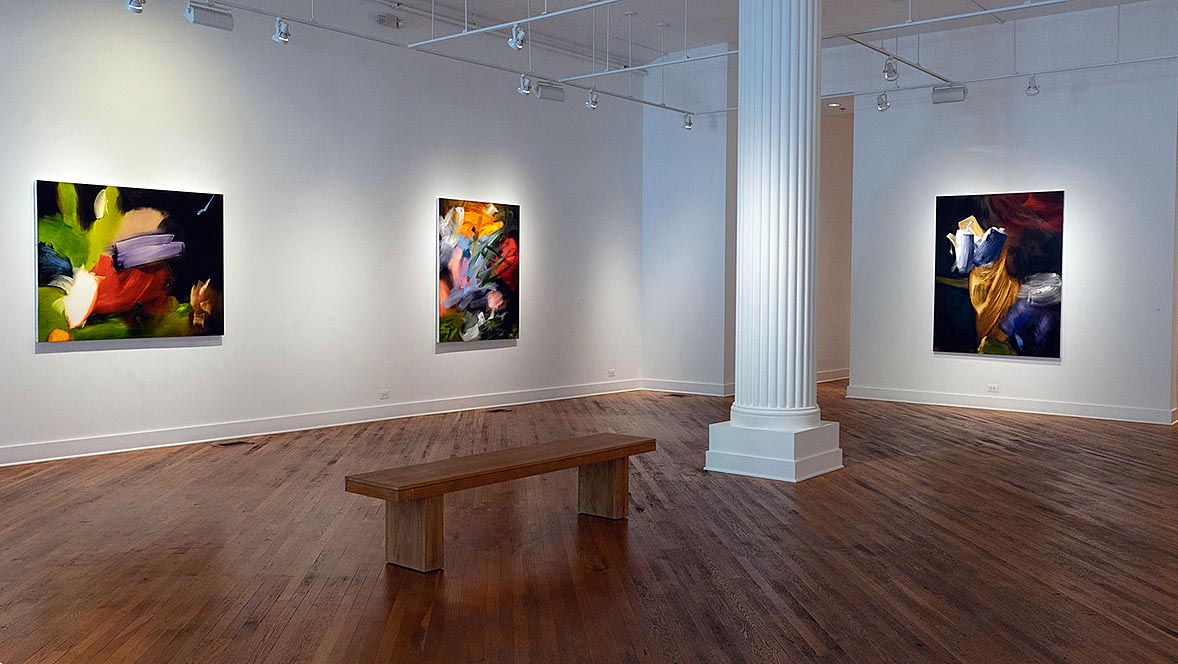 Both exhibitions delayed their openings this spring because of the Covid 19 pandemic, but now, each are on display separately at the two galleries. The new exhibition of oil paintings at David Klein downtown, Palimpsest, is a collection of eleven works of art by Elise Ansel.

You ask yourself where do artists get their ideas for a painting?  Is it from observation, photographs, events, setting up objects, imagination or from the depths of the collective unconscious?  The answer is usually all or a mix of the above. Artists bring their own experience to the creation.

Elise Ansel finds motivation in historical works of art from which she reconstructs a realistic representational work of art using abstract expressionism as her vehicle. The work in this exhibition bases its reconstructions on Old Master paintings from the Detroit Institute of Arts collection.

She says in her statement, “I create by translating Old Master paintings into a contemporary pictorial language. I mine art historical imagery for color, structure, and meaning. Thus, my paintings use the Old Masters as points of departure. They move into Abstraction by transforming the representational content, which is obfuscated and ultimately eclipsed by my focus on color, gesture, and the materiality of paint. I interrupt linear, rational readings so that the real subject becomes the substance and surface of oil paint, the range of its applications, and the ways in which it can be used to celebrate life. My work deconstructs both pictorial language and authorial agency to excavate and liberate meanings buried beneath the surface of the works from which my paintings spring.” 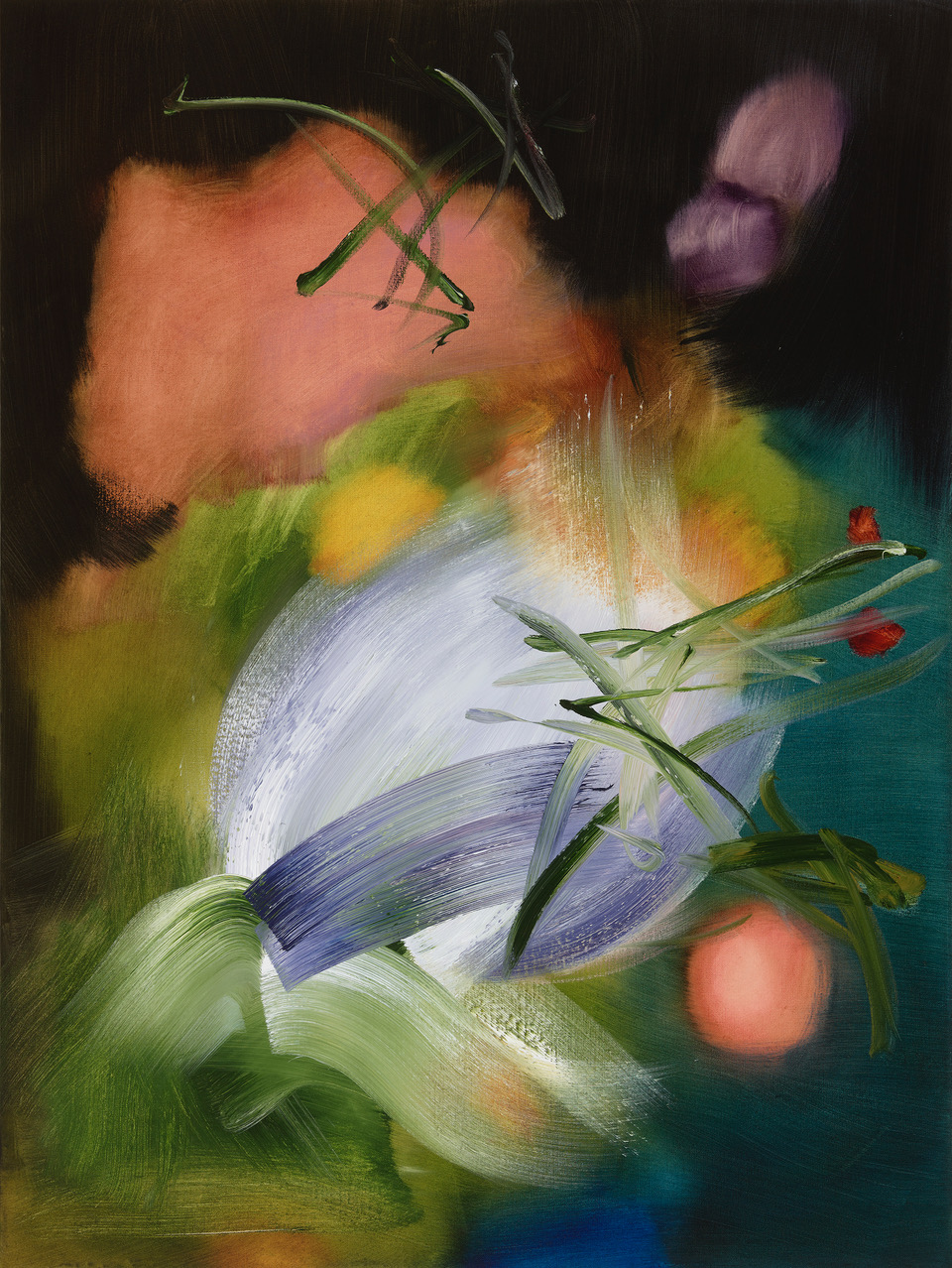 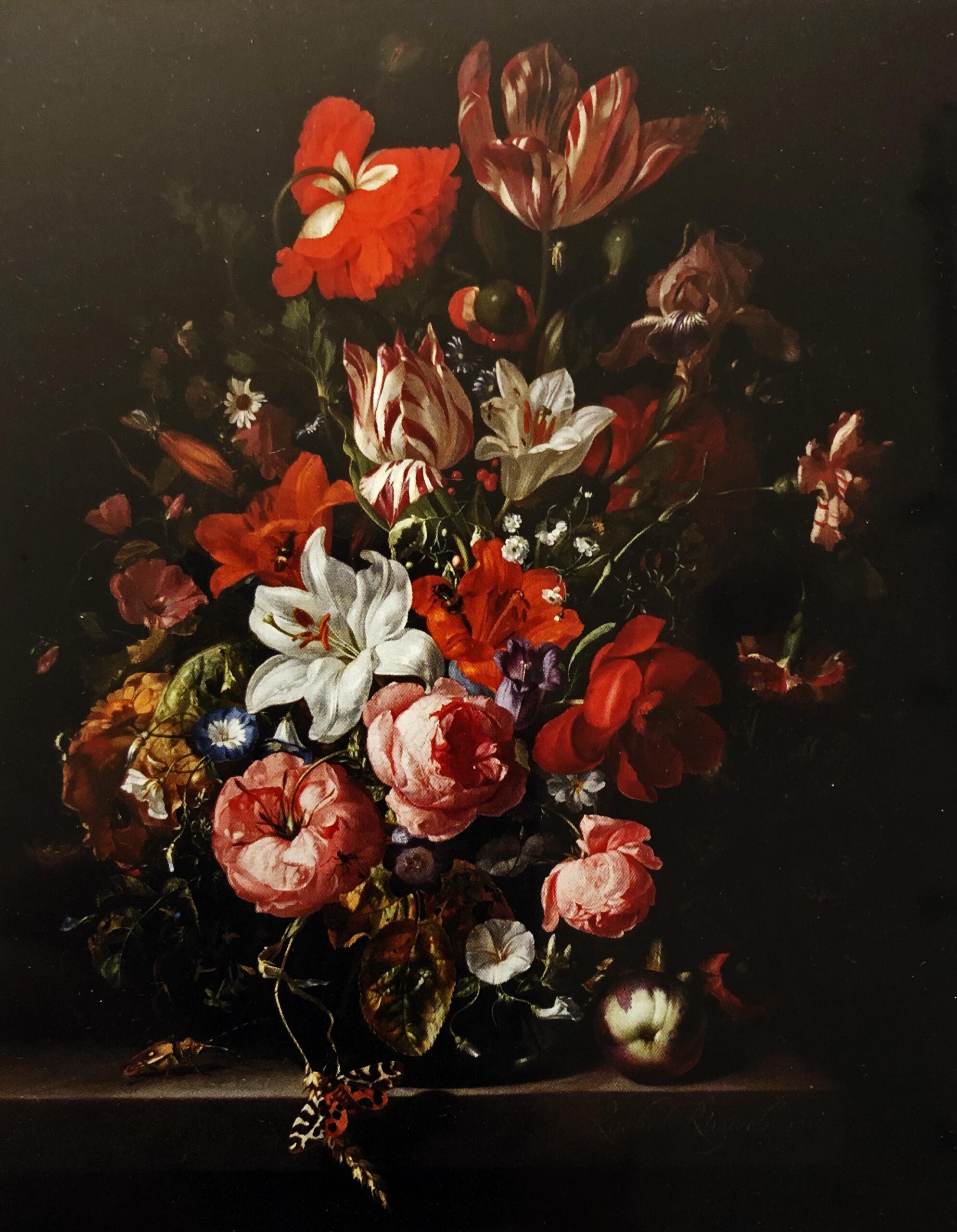 Rachel Ruysch, Flowers in a Glass Vase, Oil on canvas, 33 X 26, 1704, Image courtesy of the Detroit Institute of Arts

The work Hybrid 1 draws on the Ruysch still life and attracts the viewer in a multitude of ways. Set against a black background, the textured strokes, color palette,  Miro-like delicacy and  expressive linework renders a kind of feminine harmony. Hybrid 1 plays off Rachel Ruysch’s Flowers in a Glass Vase, 1704,  and leaves the experience wide open to interpretation.  The most profound concept here is that we all bring our own personal experience to a work of art. So when I view the Ruysch still life, where do I go?  Handsomely composed and decorated, like the photograph of an apple, it leaves little room for interpretation. 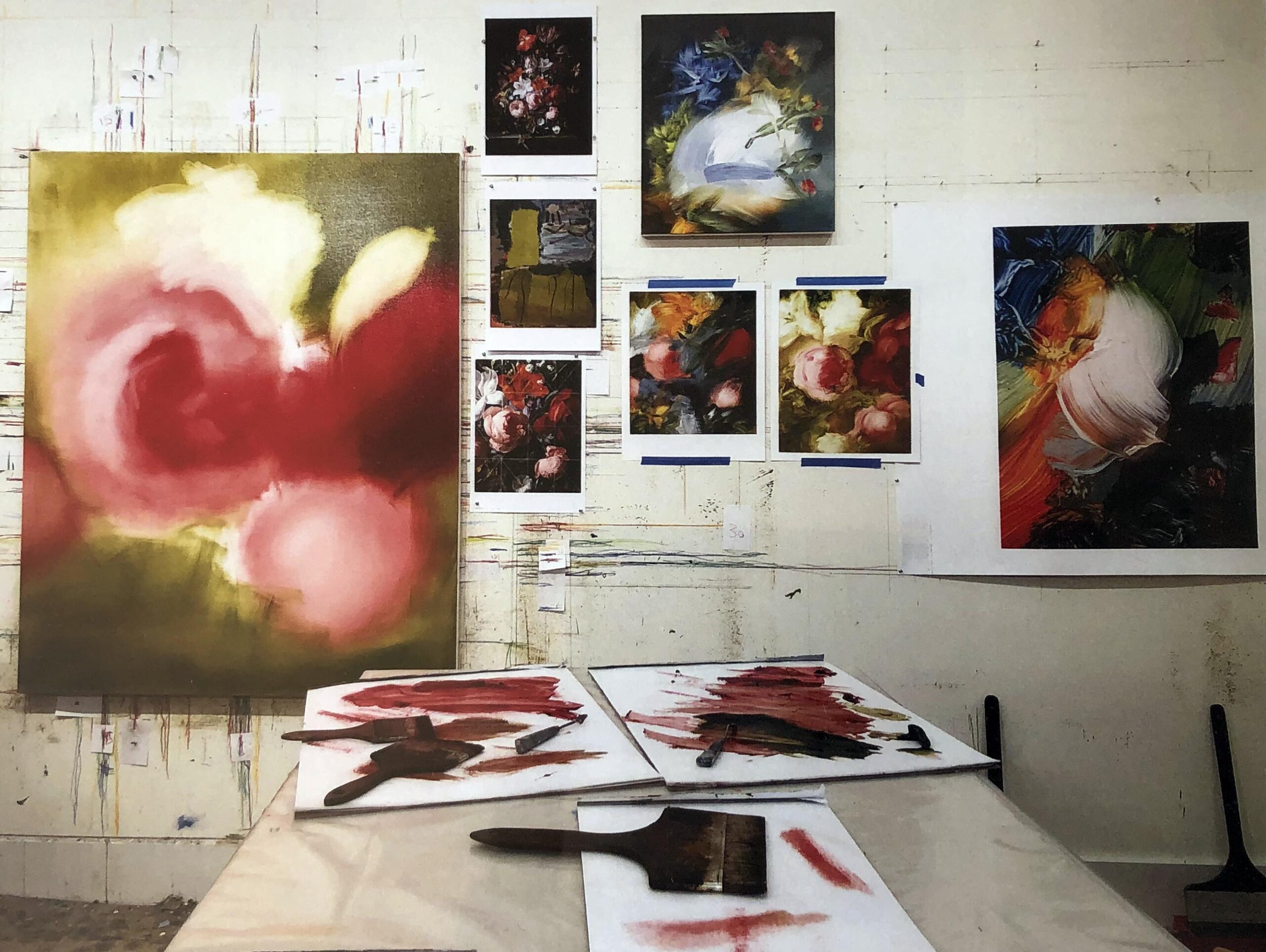 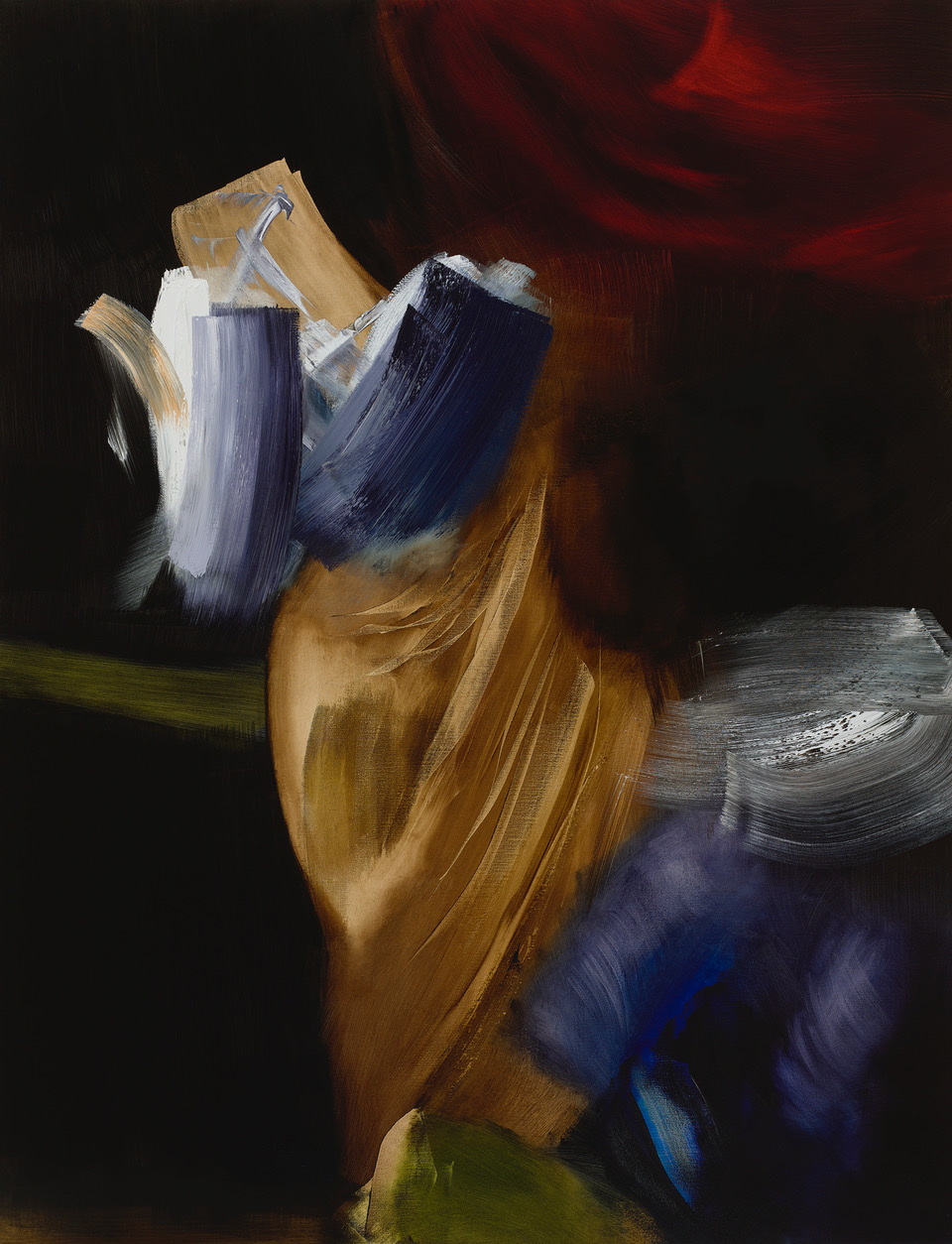 The same concept applies to the reconstruction of Artemisia Gentileschi’s Judith 1. Ansel goes to great lengths in the interpretation by writer Mary Garrard with references to her book, Reclaiming Female Agency: Feminist Art History After Post Modernism, in which she writes, “The cultural habit of seeing woman as an object-to-be-looked-at, the site of scopophilic pleasure” is denied and replaced with a focus on the artist hand.  What exactly is being killed in Gentileschi’s painting: toxic scopophilia and the myth of white supremacy.” Forgive me, but there aren’t too many psychiatrists who use Sigmund Freud in their practice these days.

Ansel’s paintings are vibrant and compelling in their execution.  Using an extra-large brush stroke of vibrant colored oil paint against these mostly dark backgrounds without reference to Caravaggio or Rembrandt would work just fine.  Some paintings retain images from Old Master works she has dissected, while others are pure abstractions whose relationship to any source is invisible. The visit to the museum feels more like contrivance and is not needed for this viewer as the paintings stand on their own and express their own individual form of abstract expressionism.

Elise Ansel, a native of New York City, is a graduate of Brown University and earned an MFA from Southern Methodist University. Her work has been exhibited widely in the United States and abroad and is in multiple private and public collections, including the Museum of Contemporary Art Krakow, Poland, Brown University, Providence, RI, and Bowdoin College Museum of Art, Brunswick, ME. Elise Ansel lives and works in Portland, Maine. 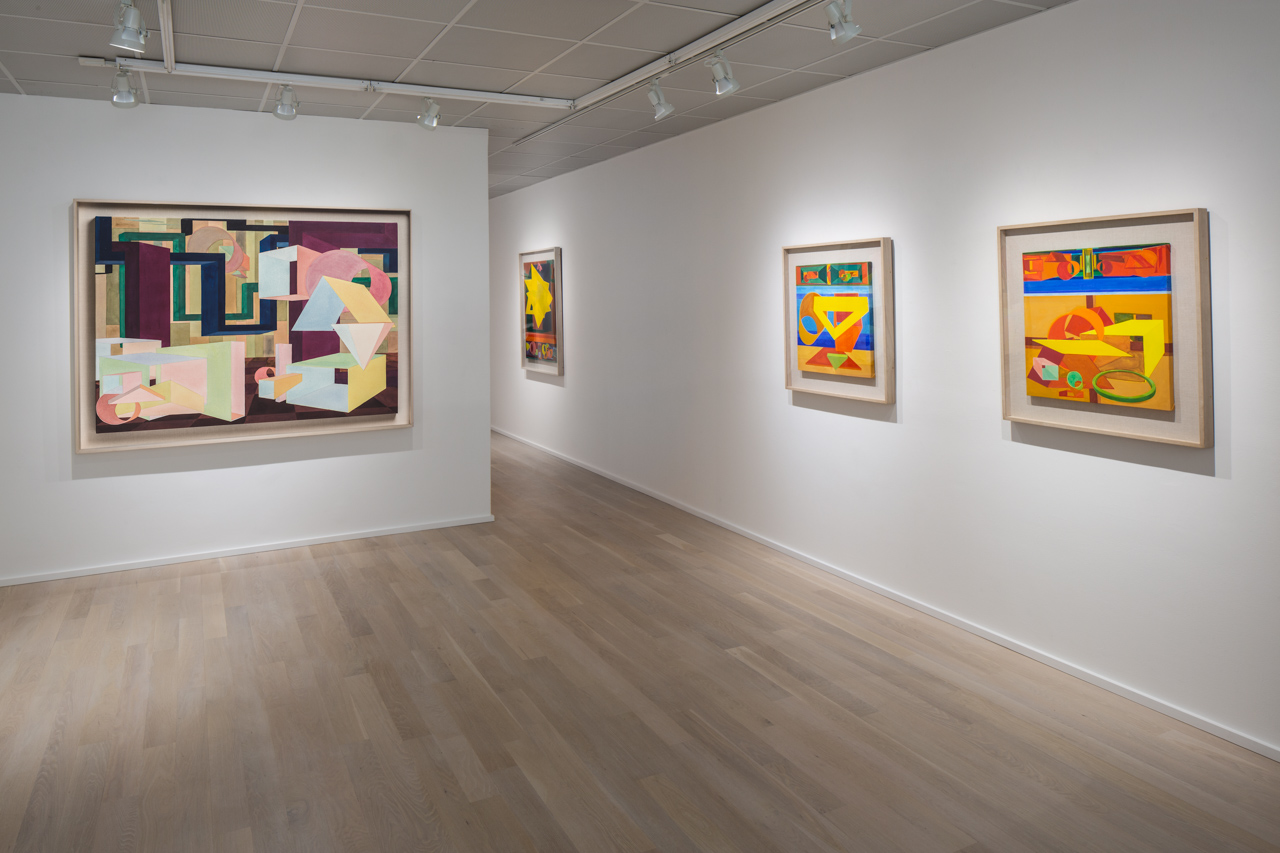 For this exhibition, David Klein draws on the Al Held Foundation for a modest show of Al Held watercolors from the early 1990s, which were painted mostly near Rome, Italy, at his studio on Janiculum Hill sometime after his residency at the American Academy (1981-82) where he spent time creating his watercolors and studying what some would call the Renaissance vision.

Born in Brooklyn, New York, in 1928, Al Held grew up in the East Bronx, the son of a poor Polish family thrown into the stresses of welfare during the depression. He showed little interest in art until leaving the Navy in 1947, where he enrolled in the Art Students League of New York. In 1951, with support from the G.I. Bill, Held traveled to Paris for two years to study at the Académie de la Grande Chaumière. In Paris, he decided that realism was not for him and moved into Abstraction and worked alongside the early 50s abstract expressionists. The single major retrospective of his career remains the survey curated by Marcia Tucker at the Whitney in 1974, which traced his development from his heavily pigmented, gestural Expressionist paintings in the 1950s, to his pioneering of flatly rendered geometric Abstraction in the context of post-painterly Abstraction in the 1960s, to his veering off on his own path in his reintroduction of illusionism into abstract painting in the early 1970s. 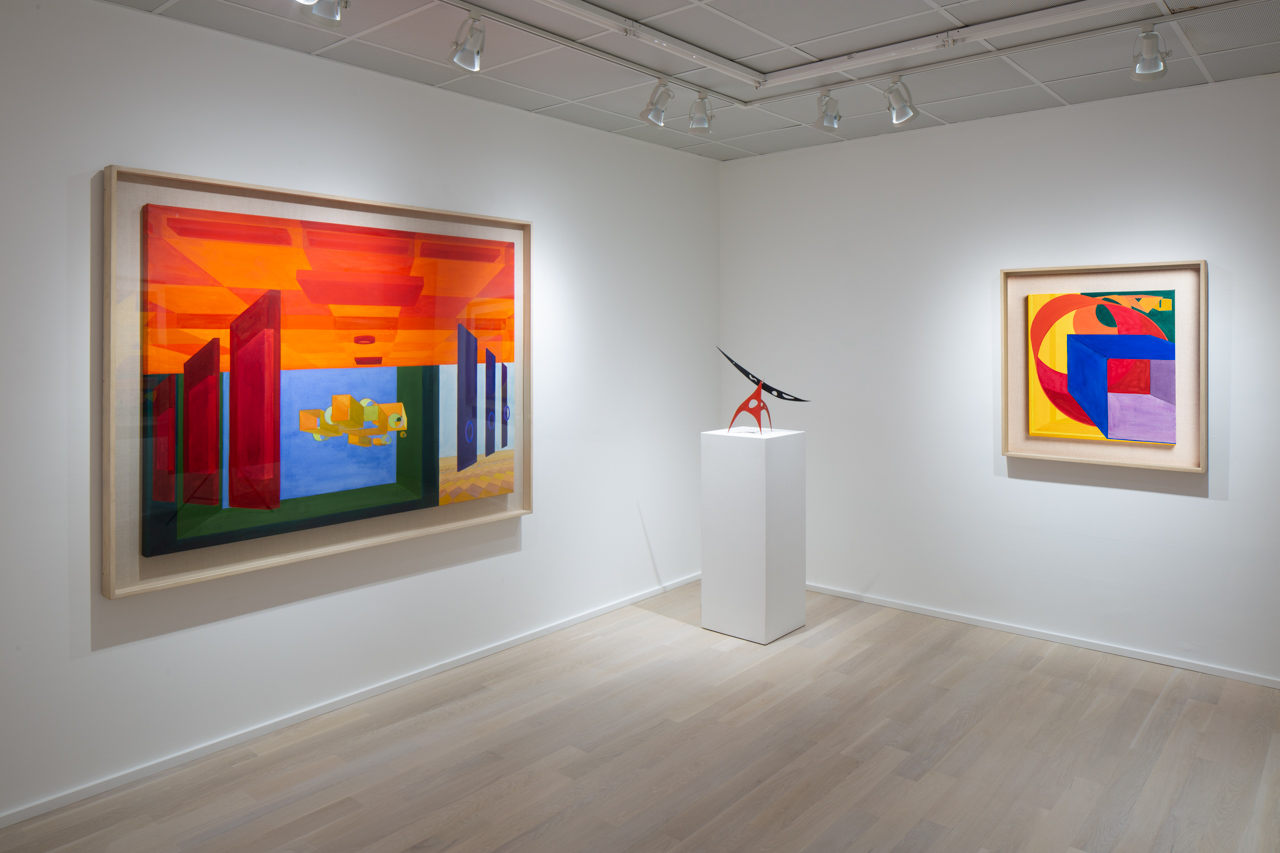 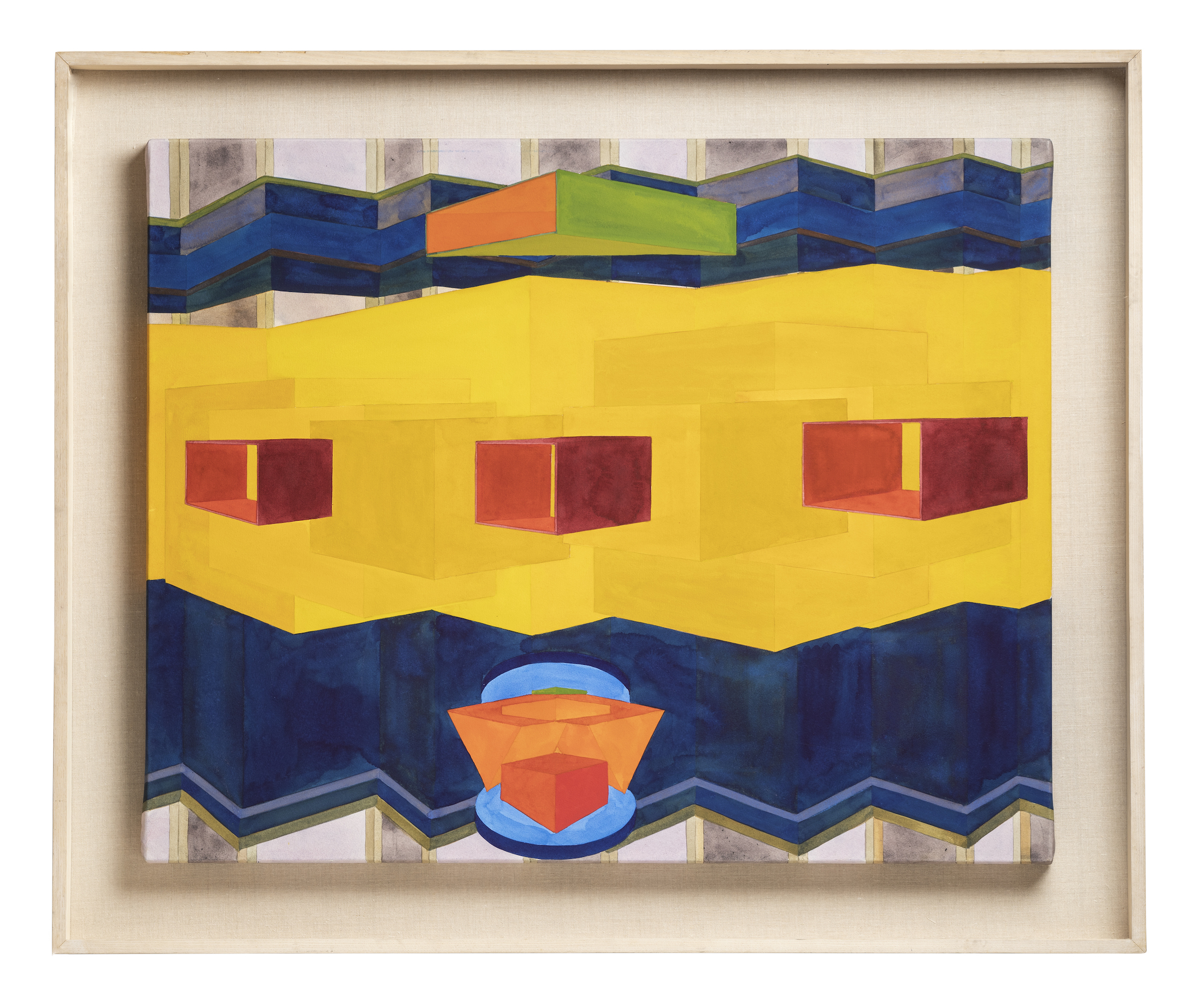 The watercolors are dominated with geometric shapes, often either suspended in space or moving backward in perspective.  The use of primary color played against secondary color creates a convergence of color and shape.  Some of these paintings have horizontal windows, reminding me at times of Diego Rivera without the use of the figure.  These futuristic landscapes defined by complexly organized architectural scaffolds are not grounded nor do they pay attention to an outside light source; instead, they darken the interior of a cube or box. Inspired by Renaissance conceptions of the universe, one could see classical compositions that are topless or bottomless, juxtaposed to Mondrian, firmly planted on earth. These works on paper are stretched on stretcher frames and float in their picture frames, much like an oil painting.

Al Held (1928-2005) was one of the last and best of the big-impact abstract painters to emerge from the postwar era.  My personal favorite in this exhibition is Tesoro 14  that moves horizontally, right to the left, in a circular motion like a giant cog in a wooden windlass that harnesses and transfers energy.  The use of color complements is dominated by primaries and a centered composition that generates its densely packed strength.

In 1962, Held was appointed Associate Professor of Art at Yale University in 1962. He was awarded the Guggenheim Fellowship in 1966. He has also been included in exhibitions at the Whitney Museum of American Art, the Solomon R. Guggenheim Museum, and the Art Institute of Chicago, to name a few. His work is in the public collections of the Whitney Museum of American Art, the Metropolitan Museum of Art, the Museum of Modern Art, New York, and the Hirshhorn Museum and Sculpture Garden.

At David Klein Galleries, both exhibitions are on display through August 22, 2020.