A new exhibition, White History Month Volume I and II: The Year of the Flood by Detroit native artist Tylonn J. Sawyer is now on display at the N’Namdi Center for Contemporary Art and runs until June 19, 2021.  There is a cadre of contemporary Detroit artists that express themselves using the figure as the dominant source of their subject matter, including Mario Moore, Sydney James, Peter Williams, Tyanna Buie, Senghor Reid, Rashaun Rucker to name only a few, but no one that takes on the visual language associated with the power and oppression leading to the social injustice against African Americans, as does Tylonn J. Sawyer.

He says in his statement, “Within this collective body of work, I’m interested in themes of black motherhood, confident hypocrisies observed in politics, religion, and the overall social order. Culling from the Western History and cultural tropes, the work in this exhibition centers on the distortions in American social fabric.” 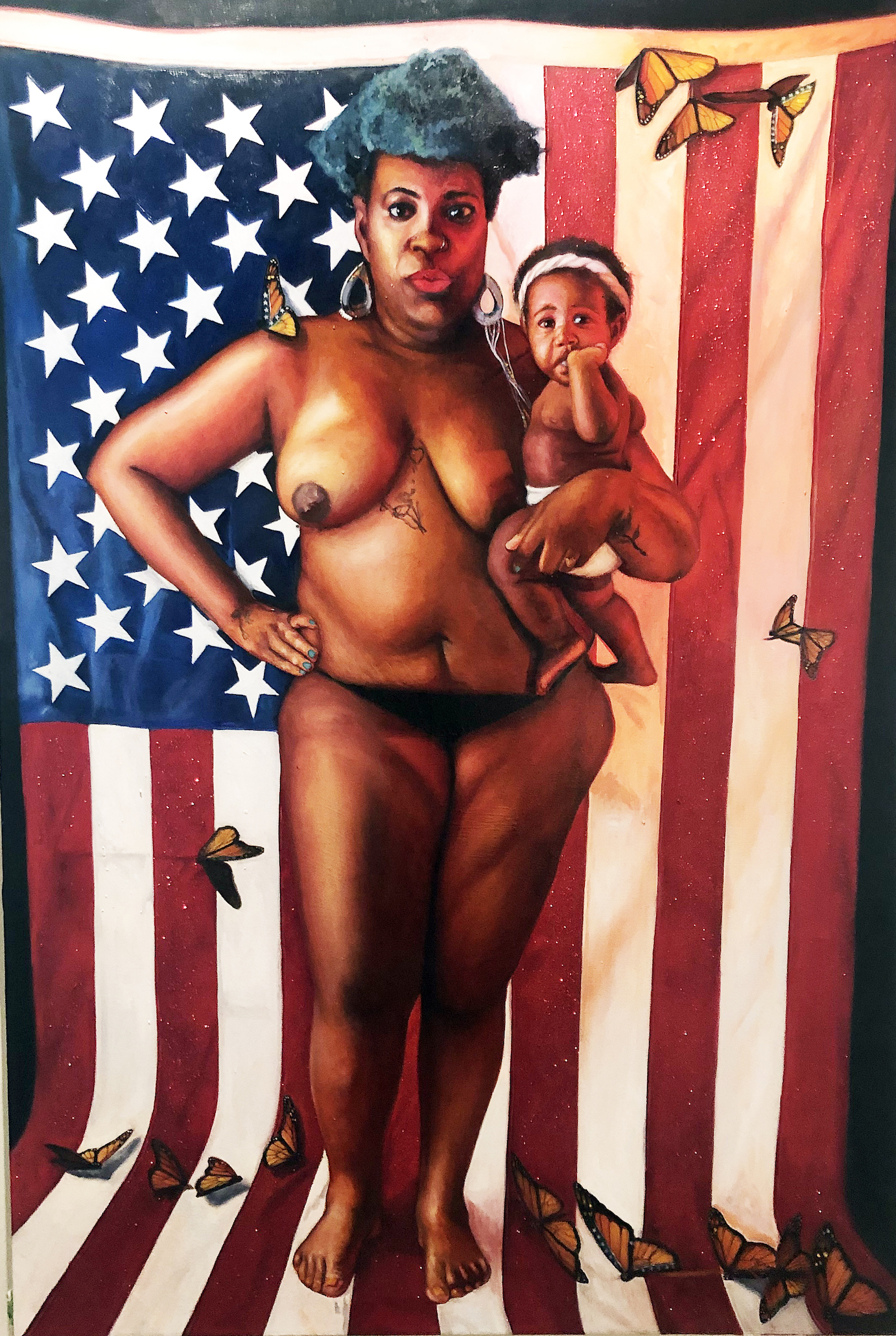 The painting from 1480 by the Italian artist Sandro Botticelli, The Birth of Venus, depicts the goddess Venus arriving at the shore after her birth when she had emerged from the sea fully-grown. The painting was created during the Italian Renaissance, has dominated western art for seven centuries, and as we see,  Sawyer selects the title to give new meaning to this painting’s title.  When I first experienced the work, I was thinking of Madonna and Child in our contemporary urban world, taking from one of the most popular titles in art history. Here in Sawyer’s work, the standing portrait with child is drenched in symbolism. The American flag is the backdrop for this new mom holding her infant surrounded by butterflies. 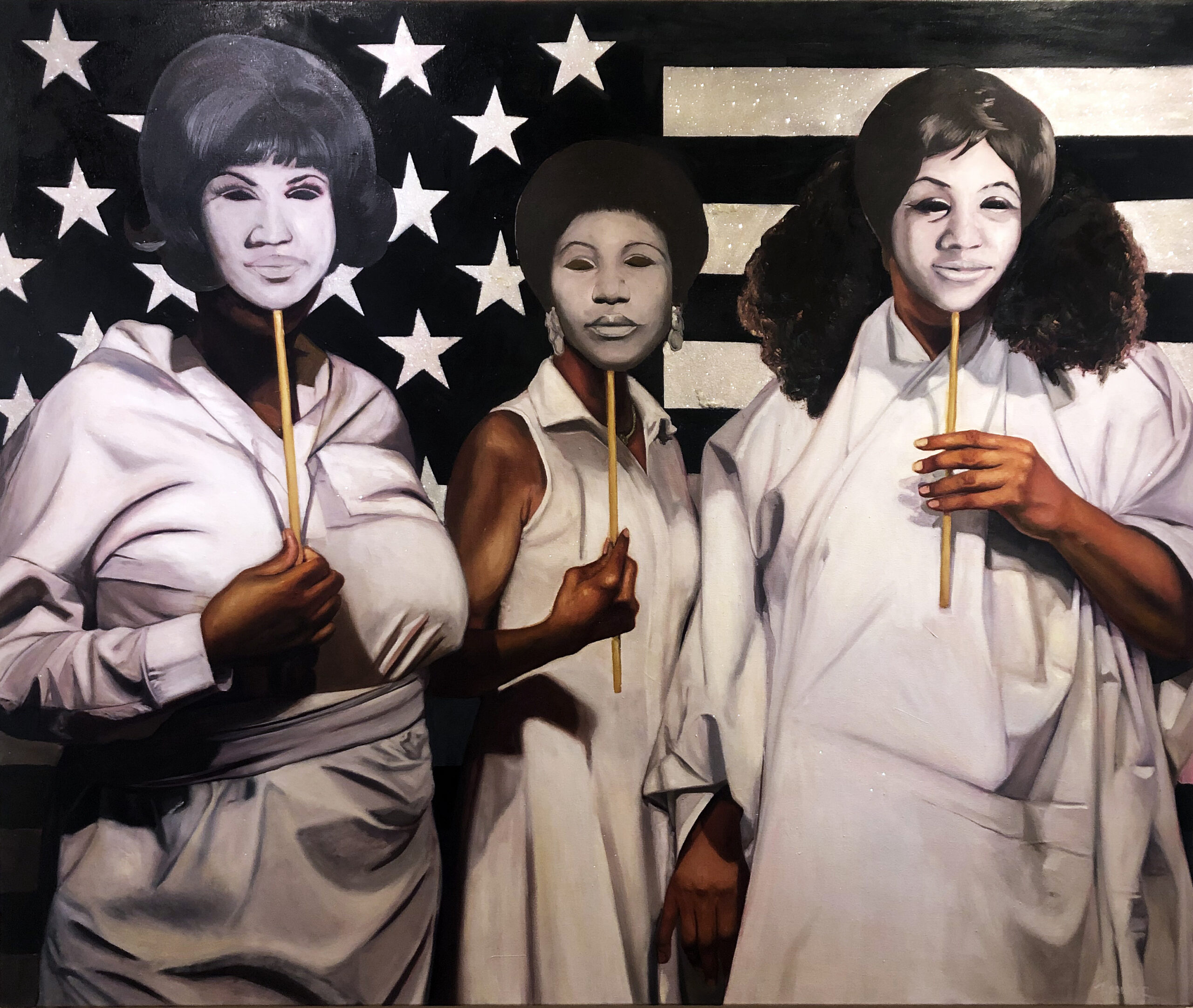 The painting Three Graces: Aretha is a large oil painting that depicts three African American women standing in front of the American flag with these hand-held black and white masks of the performer Aretha Franklin.  This motif is used in several of Sawyer’s paintings; as an example, he uses Nina Simone and Martin Luther King as the subject of masks.  The concept raises a question in the viewer’s mind: What is the idea presented, and where does it come from?

Sawyer explains, “Borrowing from rituals in sub-Saharan Africa where people would place the mask of their ancestors and spiritual deities to seek counsel for contemporary problems, the figures in this exhibition wear masks of civil rights leaders, activists, artists, and political figures. The figures represent metaphoric deities placed on the backdrop of Americana. Using religious metaphor, history, pop culture, and the flag as sacred symbols of America, I am exploring questions of how Blacks exist within the mythology of Americana.” 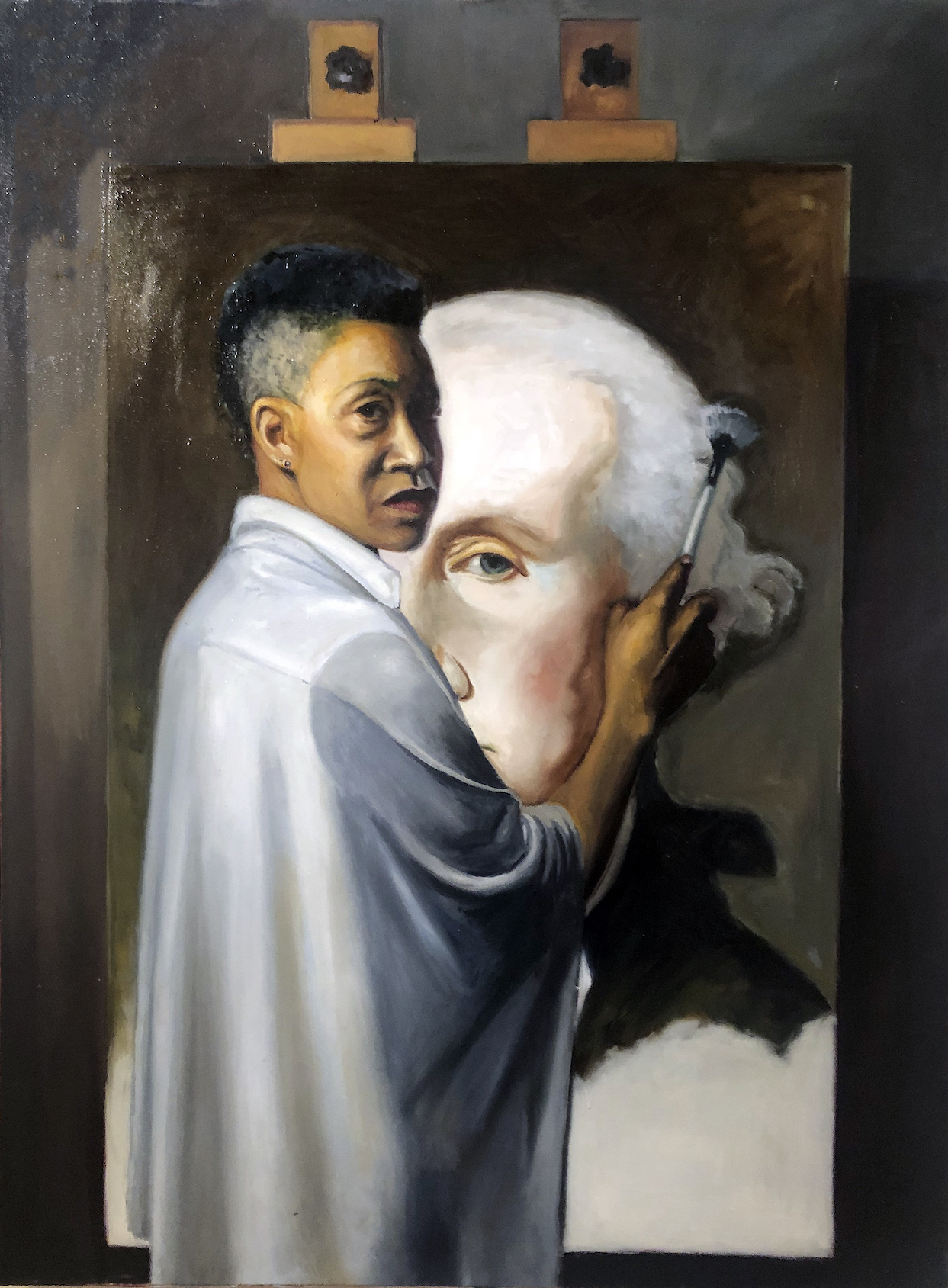 Tylonn Sawyer must have known that when it came time to apply for graduate school, he wanted to attend a school specializing in representational art, focusing on figurative painting. The New York Academy of Art is a graduate school that combines intensive technical training using methods and techniques that met his goals.  The painting Your Founding Fathers…the work that is tongue-in-cheek where the African American female is working on a portrait of George Washington—reminds us that not everyone is a descendent of the first U.S. president. 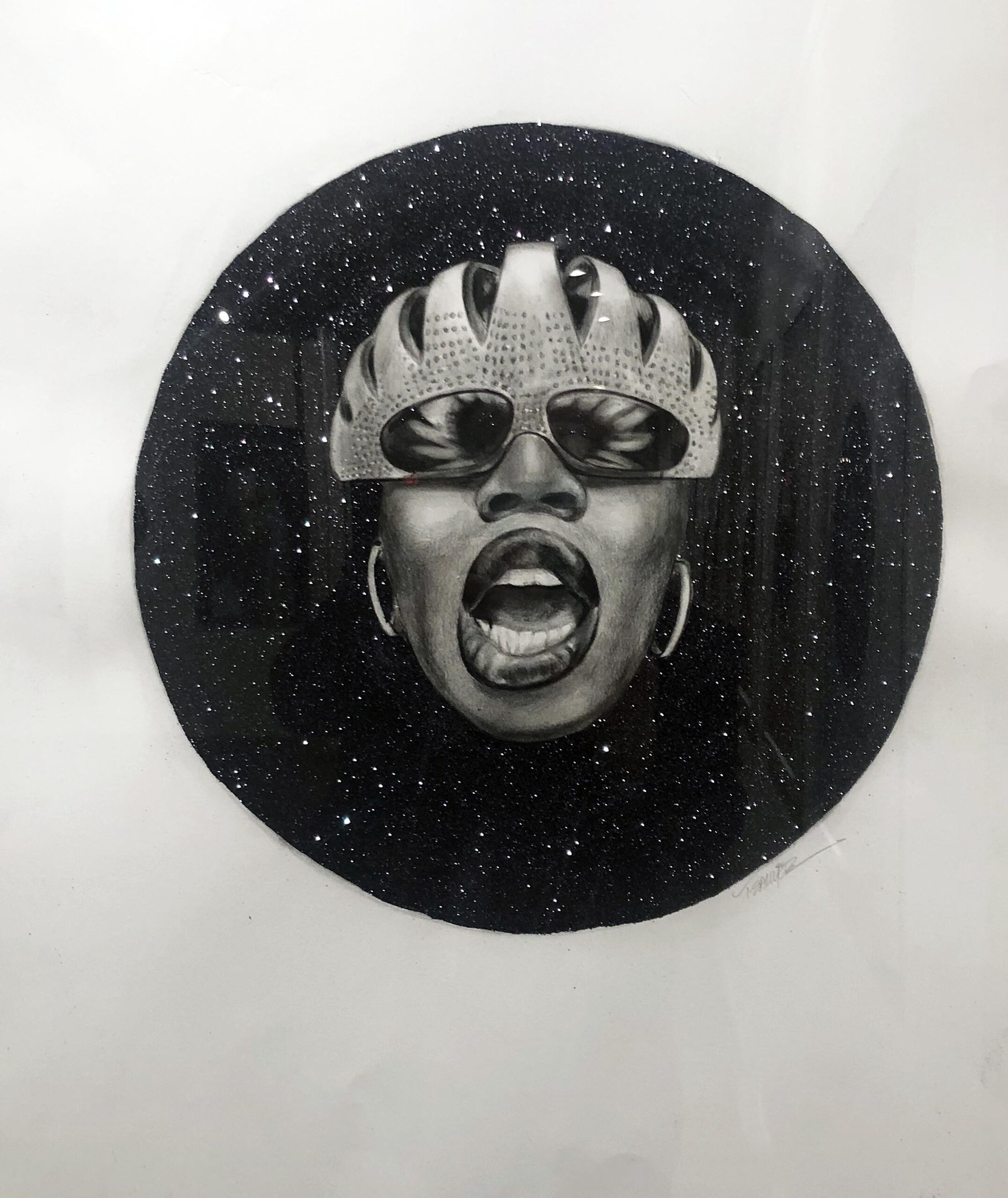 Throughout the exhibition, there is a collection of charcoal drawings, 30 x 22″ as in Missy Misdemeanor Elliot, that illustrates portraits from famous contemporary celebrities that remind people that there is much accomplishment in the entertainment business.  Sawyer gives credit where credit is due by featuring these realistic headshots where some are surrounded with gold foil.  Sawyer says “Using Hip-Hop, a music genre and culture as a not only medium for both the audio and historical soundtrack, but also as witness to our participation in history, Year of the Flood, immerses the viewer in a body that  refracts movement through a false sense of stasis, offering various aspects of praise and conflict with and of Americana.” 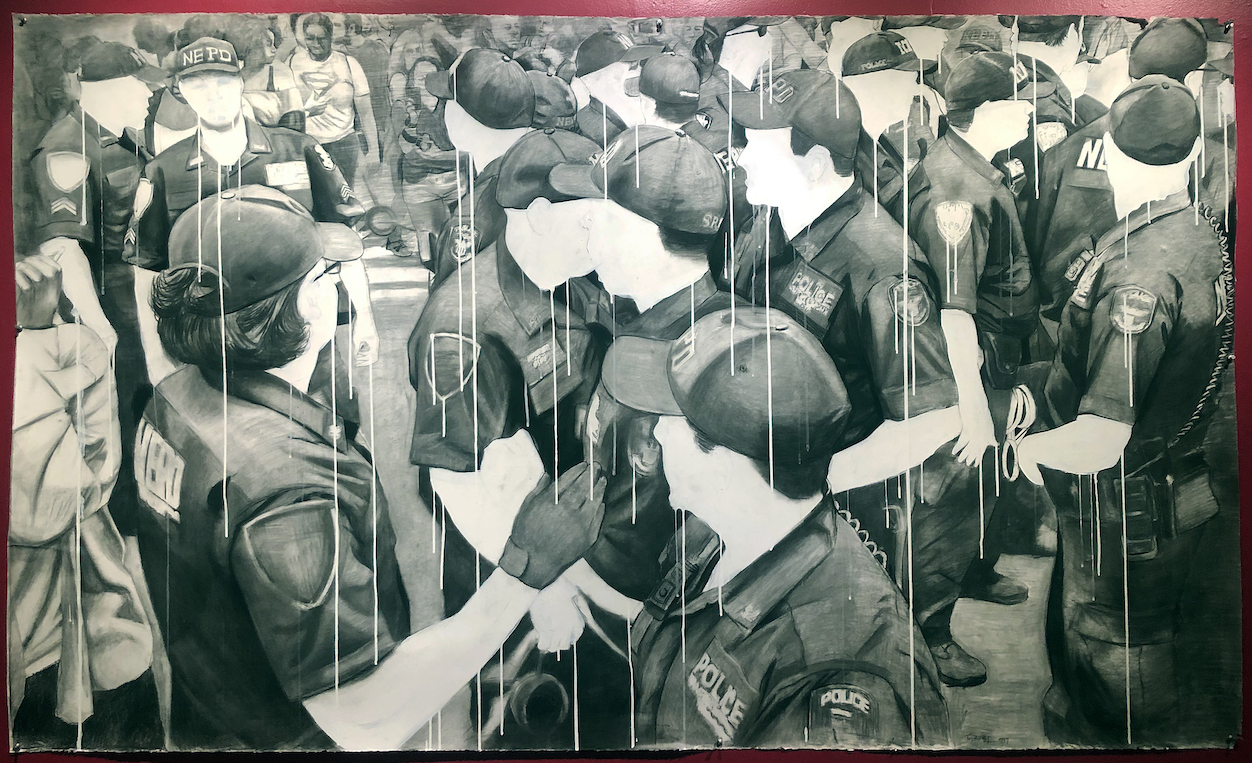 The large work, Now and Then, charcoal and acrylic is a field of police painted with flat white acrylic faces, depicts the officers as automated cutout droids crammed together in search of a strategy. The symbolism of a police force lacking the diversity it deserves is one more example of Sawyer’s tools to make his social injustice message loud and clear. 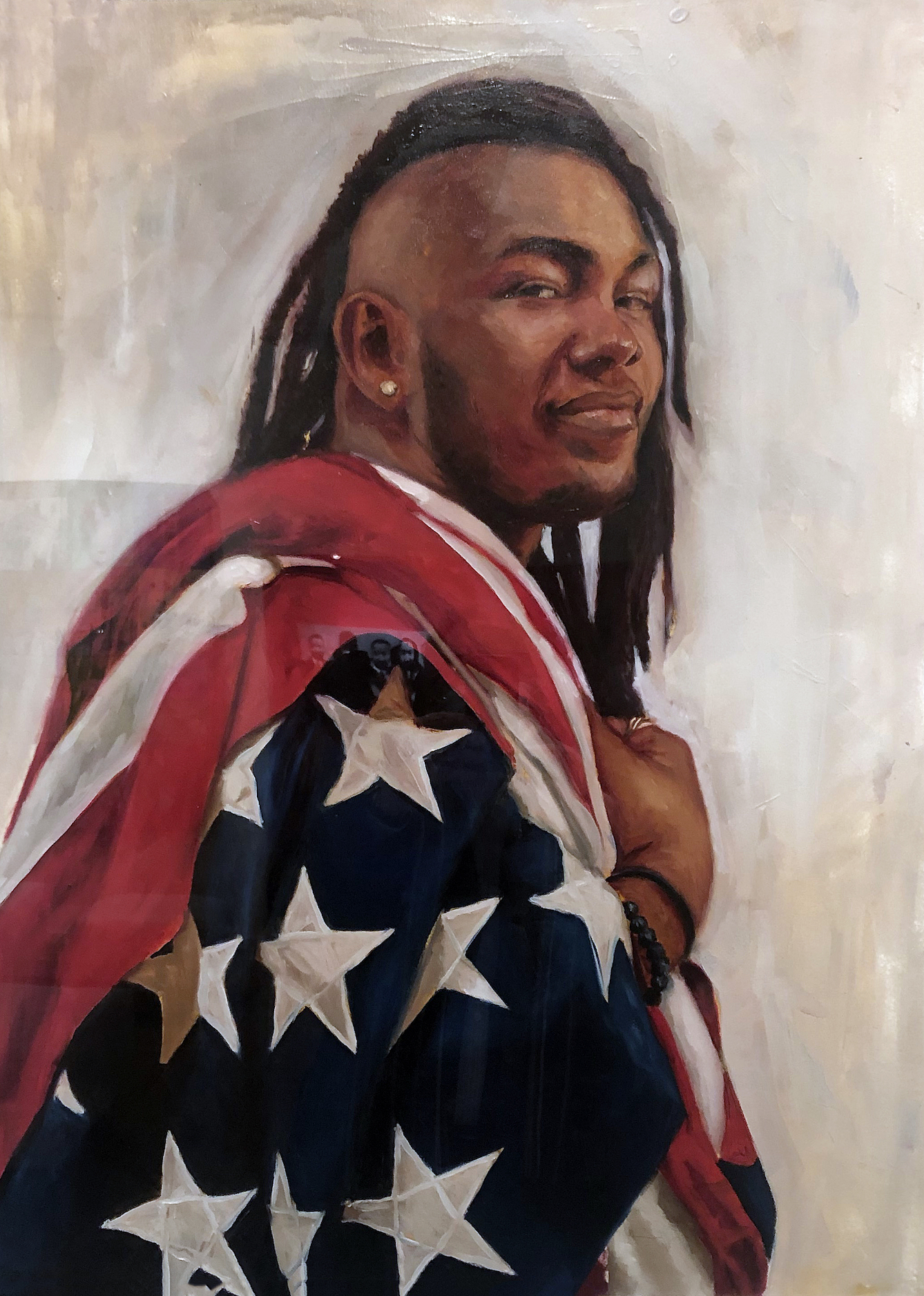 The King James Version, also known as the King James Bible, is an English translation of the Christian Bible for the Church of England in 1604.  Historically,  Britons were enslaved in large numbers, typically by wealthy merchants, who exported indigenous slaves from pre-Roman times and became significant participants in the Atlantic slave trade. The painterly portrait here depicts a contemporary African American draped in the U.S. flag, poking fun at such an event’s impossibility.

Throughout our country’s history, the intersection of art and activism has played a crucial role in social movements against inequality, oppression and injustice.  The authors of the Declaration of Independence outlined a bold vision for America: a nation where there would be equal justice for all. More than two hundred years later, it has yet to be achieved.  Though generations of civil rights activism have led to significant gains in legal, political, social and educational realms, the forced removal of indigenous peoples and the institution of slavery marked the beginnings of a system of racial injustice from which our country has yet to recover.

Tylonn J. Sawyer earned his BFA from Eastern Michigan University and his MFA from the New York Academy of Art.

White History Month Volume I and II: The Year of the Flood at the N’Namdi Center for Contemporary Art runs through June 19, 2021.