The Crooked Tree Arts Center, situated in a forested neighborhood on 6th street in Traverse City, MI, is just far enough removed from the city center that it serves as an oasis from the heavily trafficked streets of the town’s perennially congested main drag. But this relatively hidden gallery space offers first-rate programming worth the five-minute walk from Front Street, where all the action is. Crooked Tree currently hosts two exhibitions: an ensemble of large-scale paintings by Patrick Earl Hammie, and a body of photographs by Charles Mintz. Both shows combine technical finesse with layers of considered and understated social commentary.

This is a busy month for Illinois-based Patrick Earl Hammie; concurrent with this show in Traverse City, he also has work featured in the newly-opened Men of Change exhibit at Detroit’s Wright Museum (a show organized by the Smithsonian Institution), and a solo exhibition about to open at the Freeport Museum in Illinois.  At the Crooked Tree, Hammie presents a selection of large paintings (and a few smaller studies) that are deeply personal but also engage in discourse with broader social issues.

In Untimely Ripp’d, Hammie presents viewers with a confrontationally large painting of a mother delivering a baby by cesarean section. Discussing the work at the show’s opening, Hammie notes that, historically, paintings of medical procedures typically present the operating room as an emphatically male-dominated space– The Gross Clinic by Thomas Eakins, for example, or Rembrandt’s Anatomy Lesson of Dr. Tulp.  Subverting this convention, Hammie peoples this space entirely with women. Further challenging art-historical norms, the large scale of the work serves as a direct response to the imposingly large paintings of the Romantic era, so often accompanied by hyper-masculine bravado and saber-rattling. 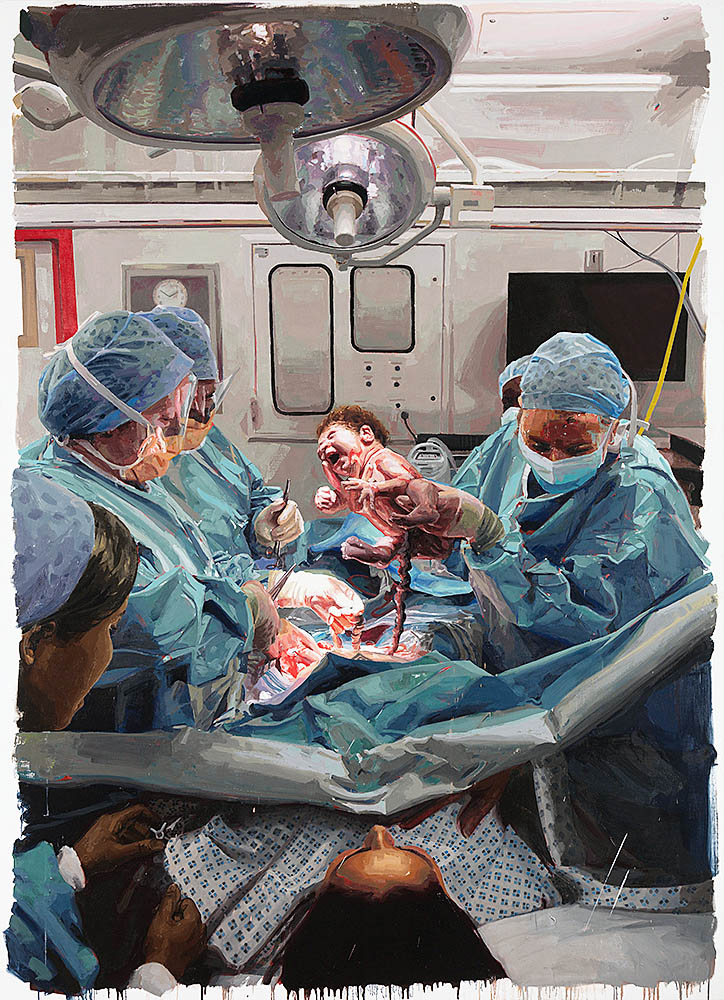 Hammie’s portrait of his mother (C.R.H.) is an affectionate tribute. Painted while she was recovering from a stroke, here she confronts us with a determined and resolute expression, ardently refusing to let her stroke get the best of her faculties.  Step in close, and it’s easy to detect Hammie’s interest in Expressionism. He applies paint thickly, and you could count the brush strokes if you cared to. But his scrubbed-in brushwork never compromises the clarity of his subjects (if this seems a little paradoxical, perhaps zoom in on some o fRembrandt’s later paintings, and marvel at his uncanny ability to capture a lucid likeness through the loosest brushwork). 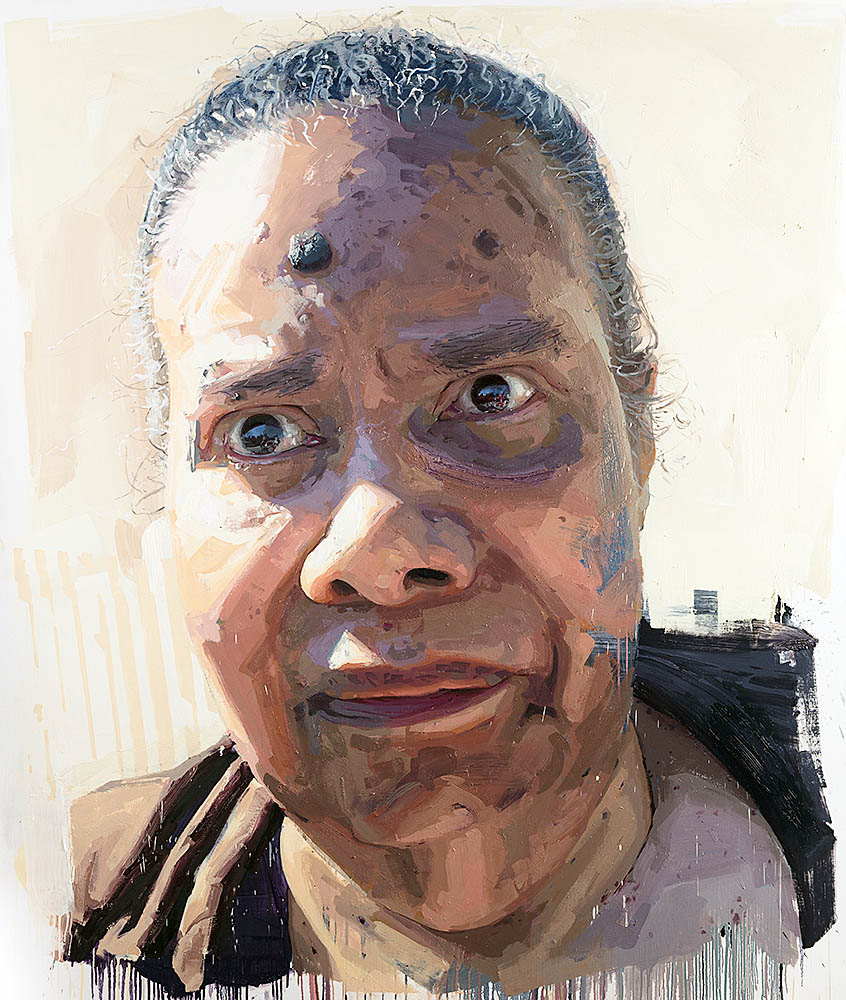 Several smaller paintings in this ensemble come from the artist’s Oedipus series, an exploratory body of work over ten years in the making. Oedipus’ name means “swollen foot,” and Hammie’s expressive, close-up renderings of feet were informed by references to historical and personal associations. Feet can evoke the means by which enslaved individuals escaped and trekked toward freedom for example; alternatively, feet could suggest the manacles and restraints that kept the enslaved in bondage. But the series also obliquely references the artist’s father, who lost several toes as the result of diabetes, and who was reduced to a comatose state as the result of surgical complications, leaving Hammie (young at the time) with the difficult decision of whether or not to prolong his father’s life, and under what conditions. Like the rest of his work, these paintings combine technical excellence with conceptual depth. 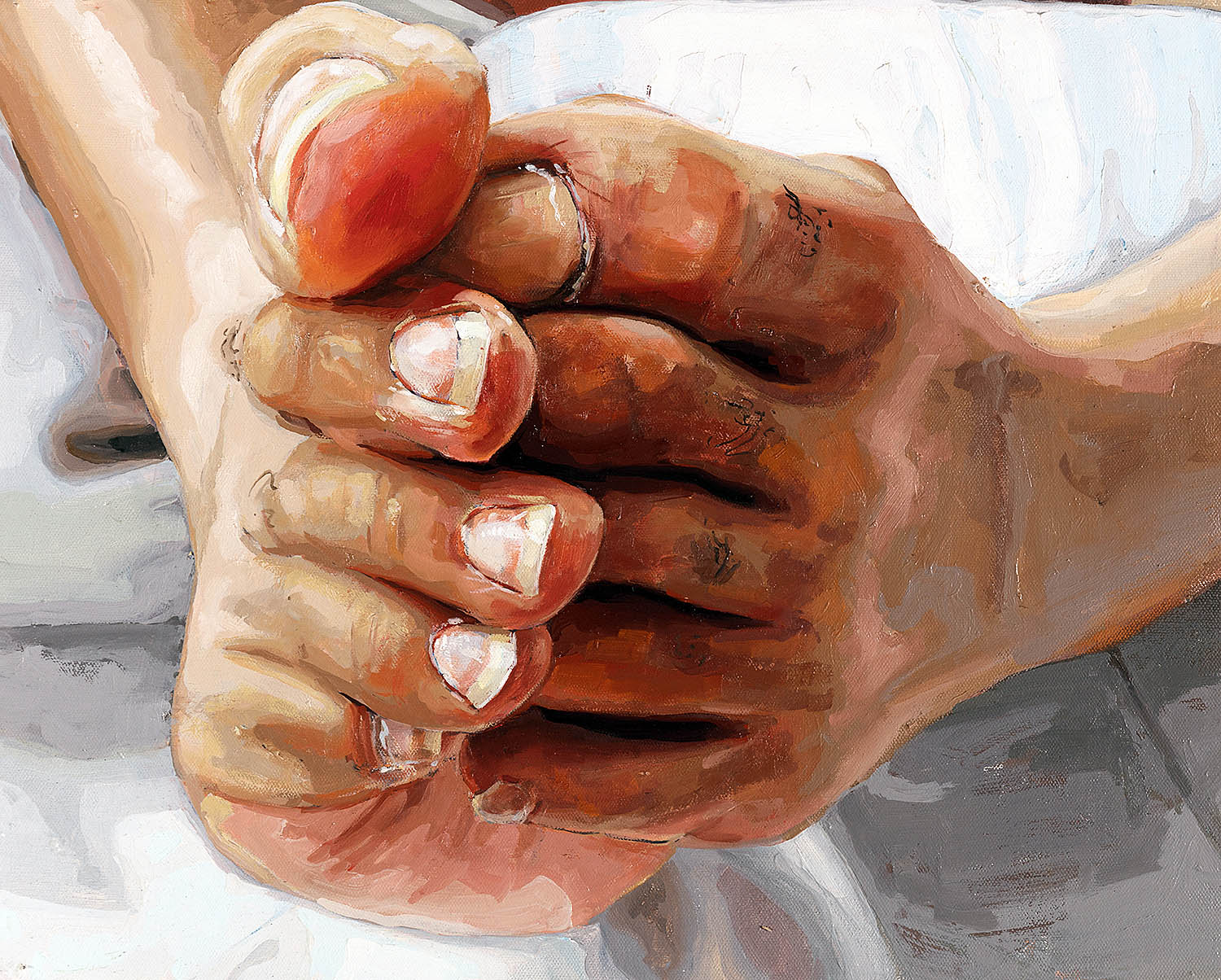 Concurrent with this exhibition, the Crooked Tree Arts Center is also showing a body of photography by Charles Mintz, who here explores the American dream of home-ownership.  Mintz is an Ohio-based photographer whose series Every Place I’ve Ever Lived (a body of work that addresses the housing foreclosure crisis) is featured in the permanent collection of the Smithsonian Museum of American History. Lustron Stories, on view at the Crooked Tree, is an extension of Mintz’s interest in photographing working-class domestic spaces.

This show is a photographic exploration of Lustron houses and their enduring legacy. Manufactured in Columbus, OH, in the late 1940s by Lustron Corporation, these 1,100 square-foot prefabricated steel houses offered affordable housing to the working class. They utilized reductive spaces stripped bare of almost all decorative elements, and could be purchased for approximately $10,000.  About a third of these 2,500 homes are still extant, and most are still inhabited. 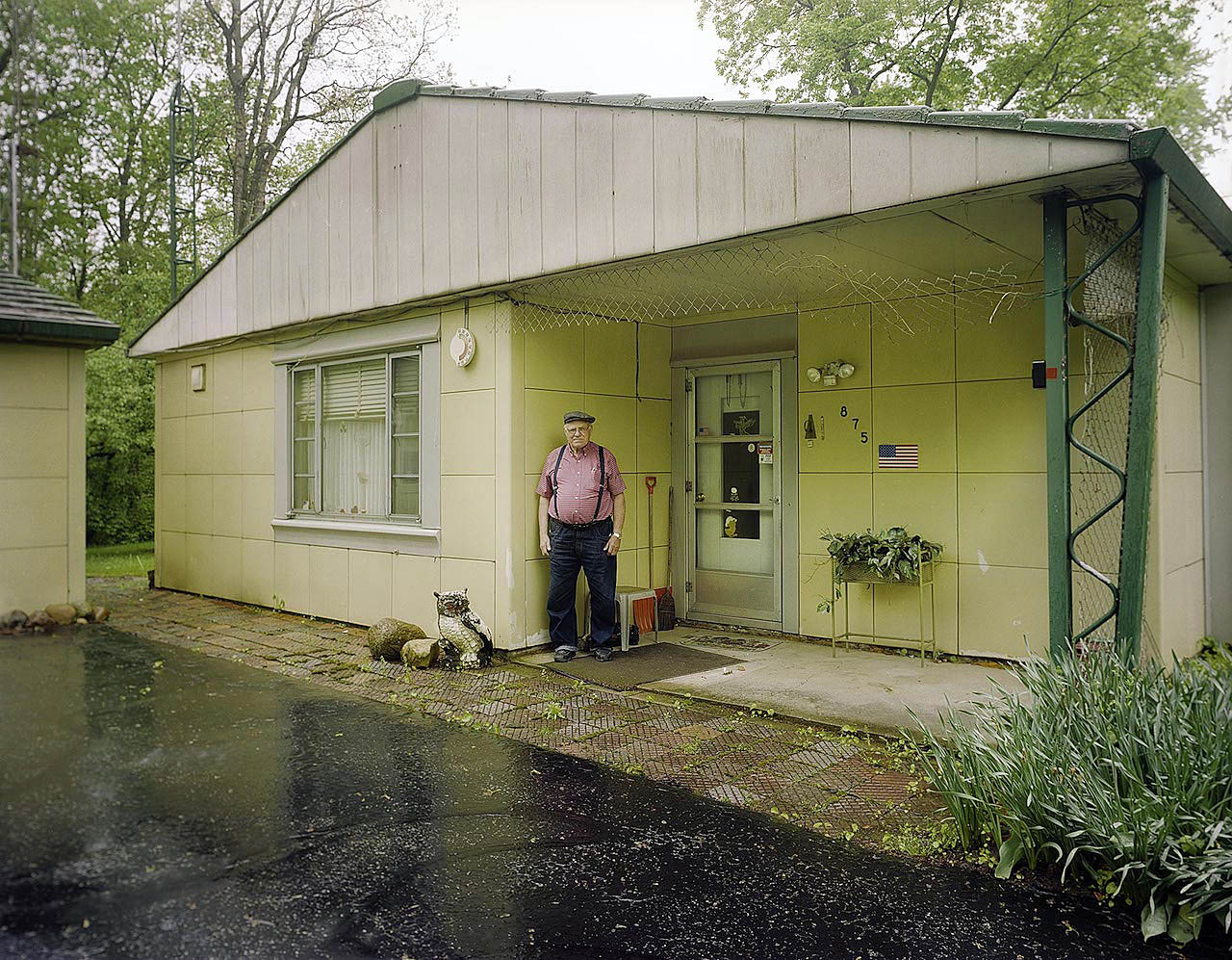 It takes just a few images to get a sense of the Lustron aesthetic; after all, there wasn’t much variety and customization wasn’t an option.  They were made from steel and coated with enamel, rendering magnets the best device to personalize the interiors with pictures or other wall-hangings. They came in four colors, and much of the furniture was built in, like the ubiquitous recessed bookcase and mirror we see in several of the living rooms pictured here.

Though the houses themselves have a similar (if not exactly uniform) aesthetic, in this series Mintz manages to suggest the varied personalities and walks of life of their inhabitants. Each individual (or family) poses beside or within their home, surrounded by personal effects and belongings that speak to their personal stories.  Pat C, for example, sits in her living room (flanked by the ever-present Lustron bookshelf), surrounded by a myriad of collectibles, paintings, and photographs (some in black and white, and others in the sort of washed-out color characteristic of photographs from the 70s) that offer us glimpses of her multi-generational family history. 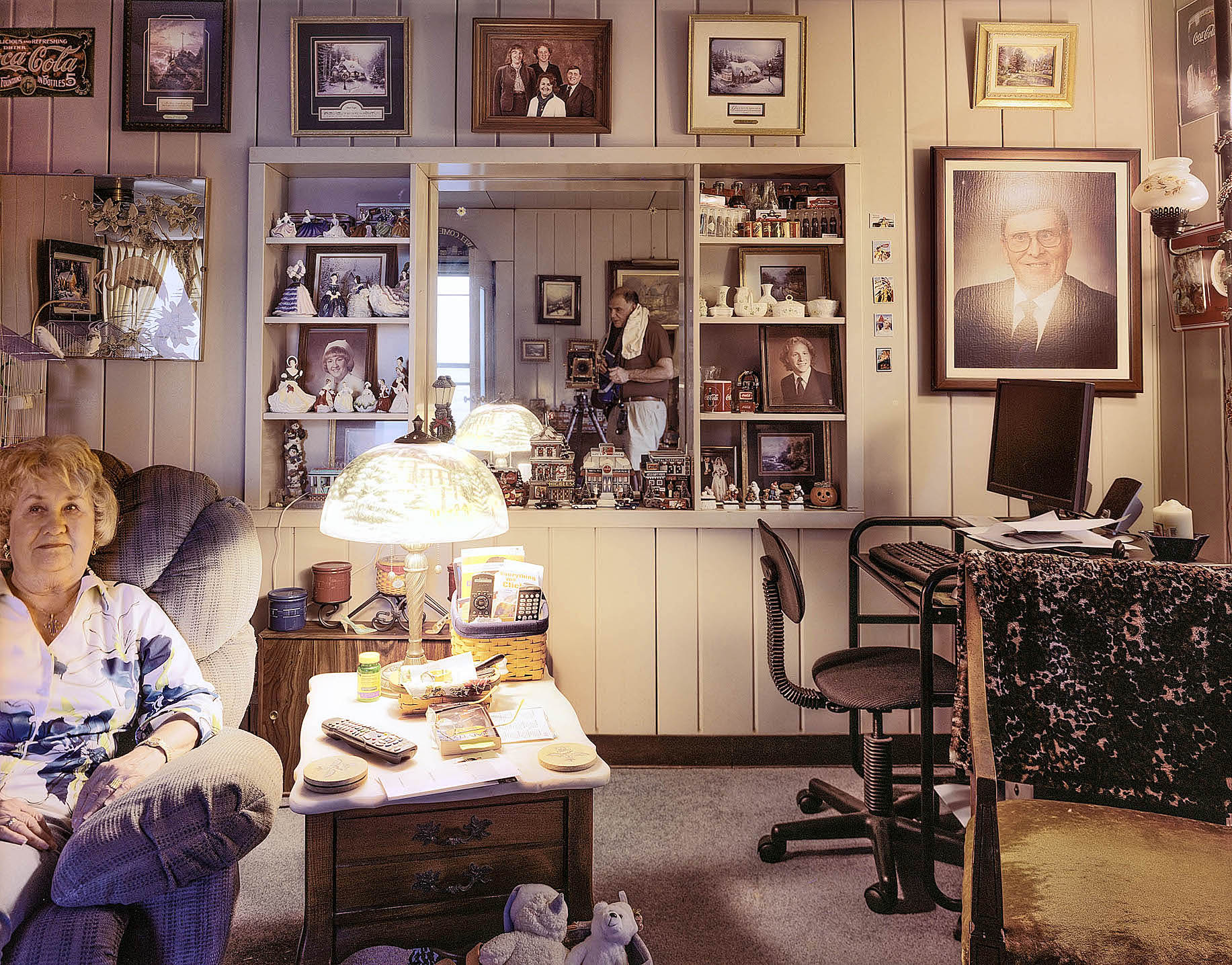 Like much else from the postwar era, it’s difficult not to look back at Lustron homes without seeing them as remnants of a more optimistic time when anything factory-made and mass-produced, from Tupperware to TV Dinners, promised a forward-facing domestic utopia. It’s an optimism that, in retrospect, seems altogether naive. But the goal of universal home-ownership was (and remains) admirable and worth pursuing. Even Frank Lloyd Wright tried his hand at designing affordable housing, an ambition that gave rise to his Usonian homes; however, he was never able to translate his lofty and ideal design aesthetic into homes that were actually affordable for the broader public. So say what you will about the reductive design of Lustron homes; they were an innovative and largely successful approach to affordable housing, and arguably succeeded in accomplishing what Wright never did. But still, the series leaves one wondering, in the end, if perhaps America’s working class is deserving of something just a little more… 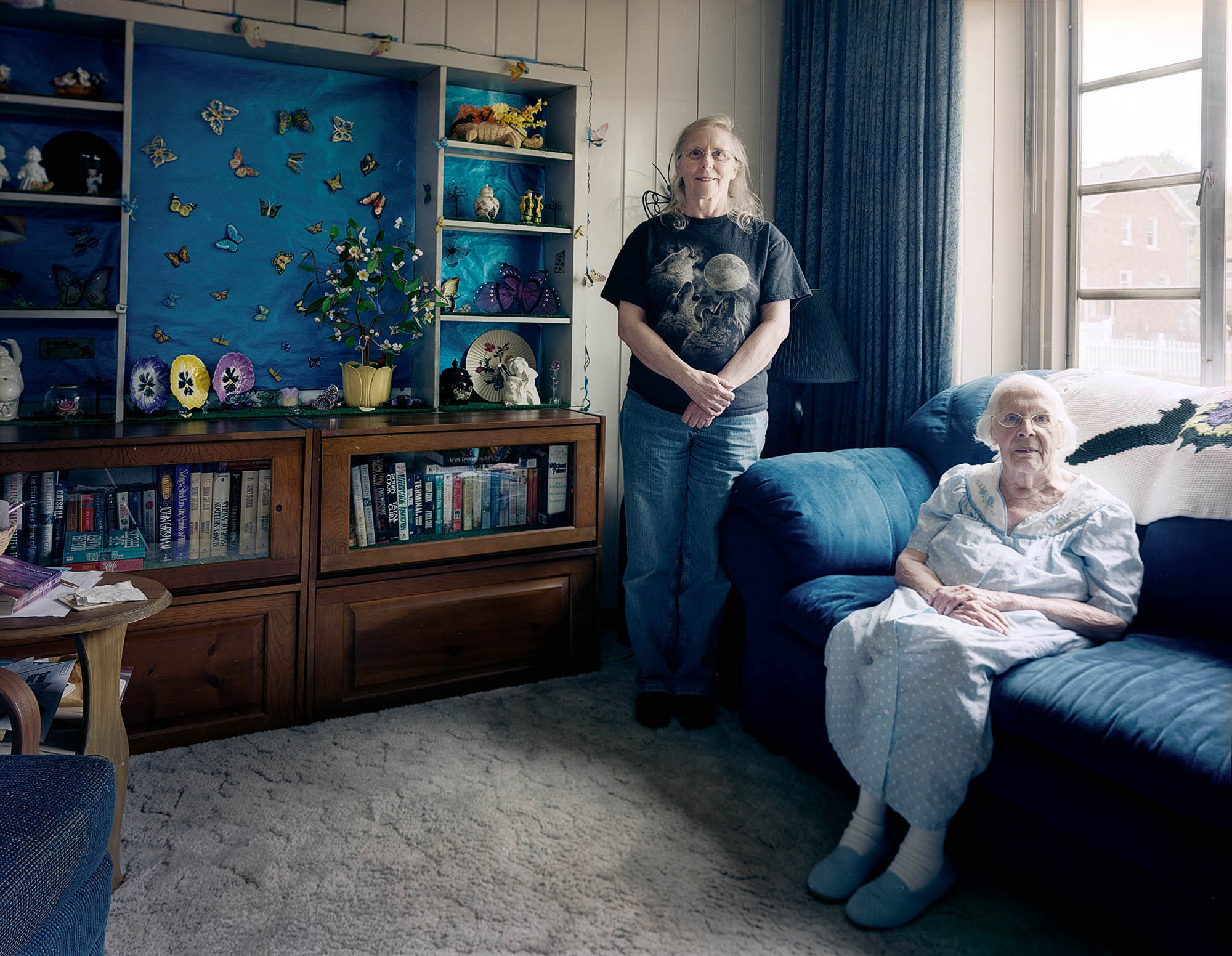 Forward and Lustron Stories are both on view at the Crooked Tree Arts Center in Traverse City, MI through November 13, 2021.