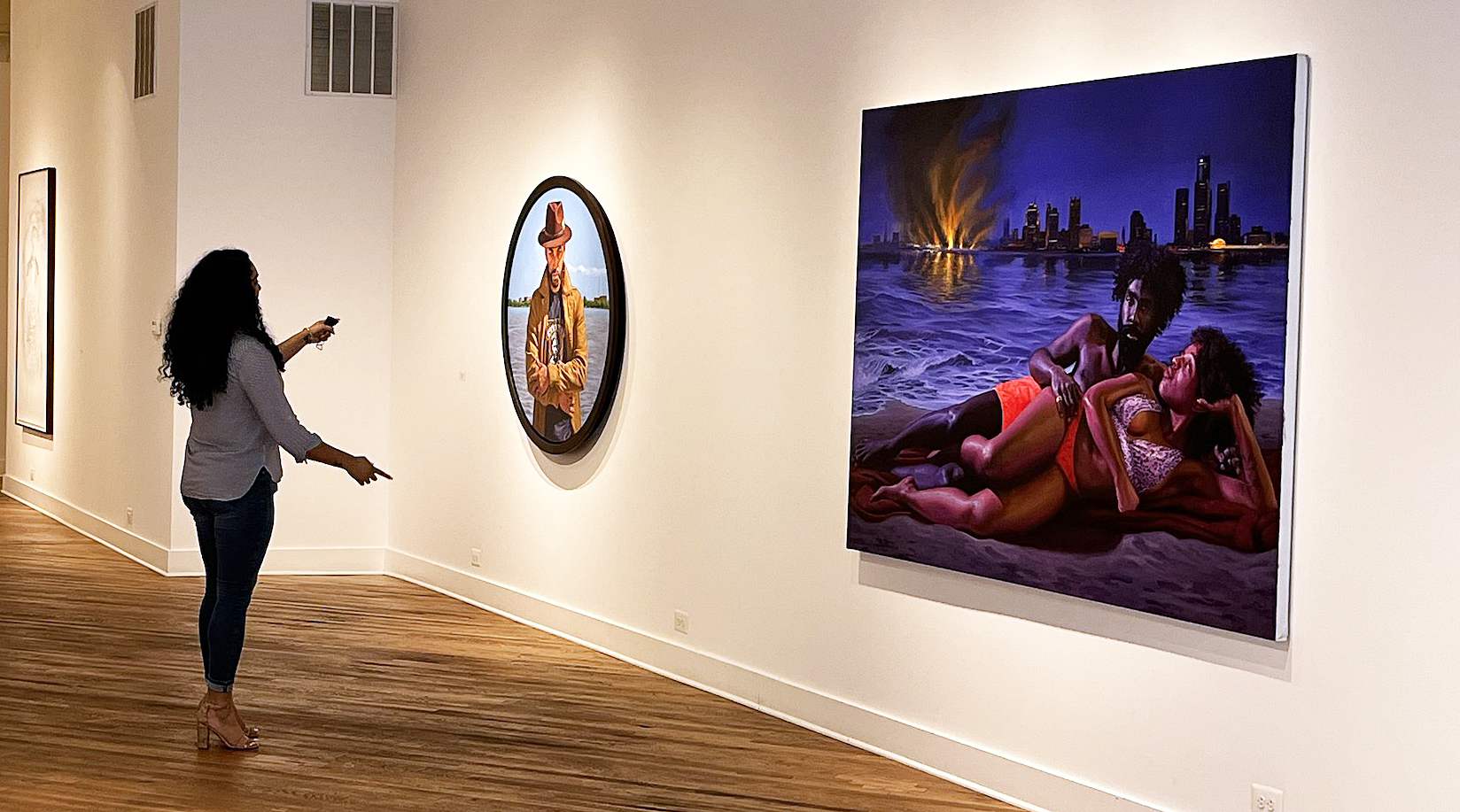 An installation view of Midnight and Canaan at the David Klein Gallery in Detroit, up through Nov. 5, 2022

Mario Moore’s solo show, Midnight and Canaan, which just opened at Detroit’s David Klein Gallery, is well worth going way out of your way to catch. The figurative oil paintings in front and the three silverpoint-on-paper works in the back room are mesmerizing, particularly when you get the story behind them.  Midnight and Canaan will be up through Nov. 5.

Moore, a College for Creative Studies grad with an MFA from Yale, has taken a sober, admiring look at Black leaders who worked the last stretch of the Underground Railroad in Michigan – names that would be unfamiliar to most people. In his Artist’s Statement, Moore notes that he learned a lot about the Great Migration in school, which brought African-Americans from the deep south to northern cities, but almost nothing about Black abolitionists before the Civil War, who deserve to be honored for their persistence and unfathomable courage, given all that they were up against.

As for the title, “Midnight” and “Canaan” were code words for Detroit and Canada, respectively, that abolitionists employed.

The operation of the Underground Railroad was both sophisticated and practical. Moore quotes from an 1886 Detroit Tribune interview with a William Lambert, who explains how they’d transport individuals fleeing slavery in “tin-peddling wagons with false bottoms, large enough to hold three men, traveling through the South.”

Lambert himself gets an affectionate shout-out with Moore’s large, silverpoint portrait. As with the other two silverpoint works of Sojourner Truth and George DeBaptiste, lines stitched onto the fabric by Moore’s mother, Detroit artist and Kresge Artist Fellow Sabrina Nelson, delineate the routes the three took while working for the Underground Railroad, whether to Battle Creek, Port Huron, Detroit or Amherstburg, Ontario.

Laid down with actual gold thread, the lines take the shape of branching railroad tracks. In all three cases, Nelson’s linear needlework frames the individual in question, hovering above their heads a bit like angular halos, at the same time that the lines all reach toward the right – i.e., the east – to Canada and freedom. As for the gentleman himself, Lambert — handsomely dressed in frock coat and tie — stares out at the viewer with determined, undeceived eyes. So too does Sojourner Truth on the facing wall. 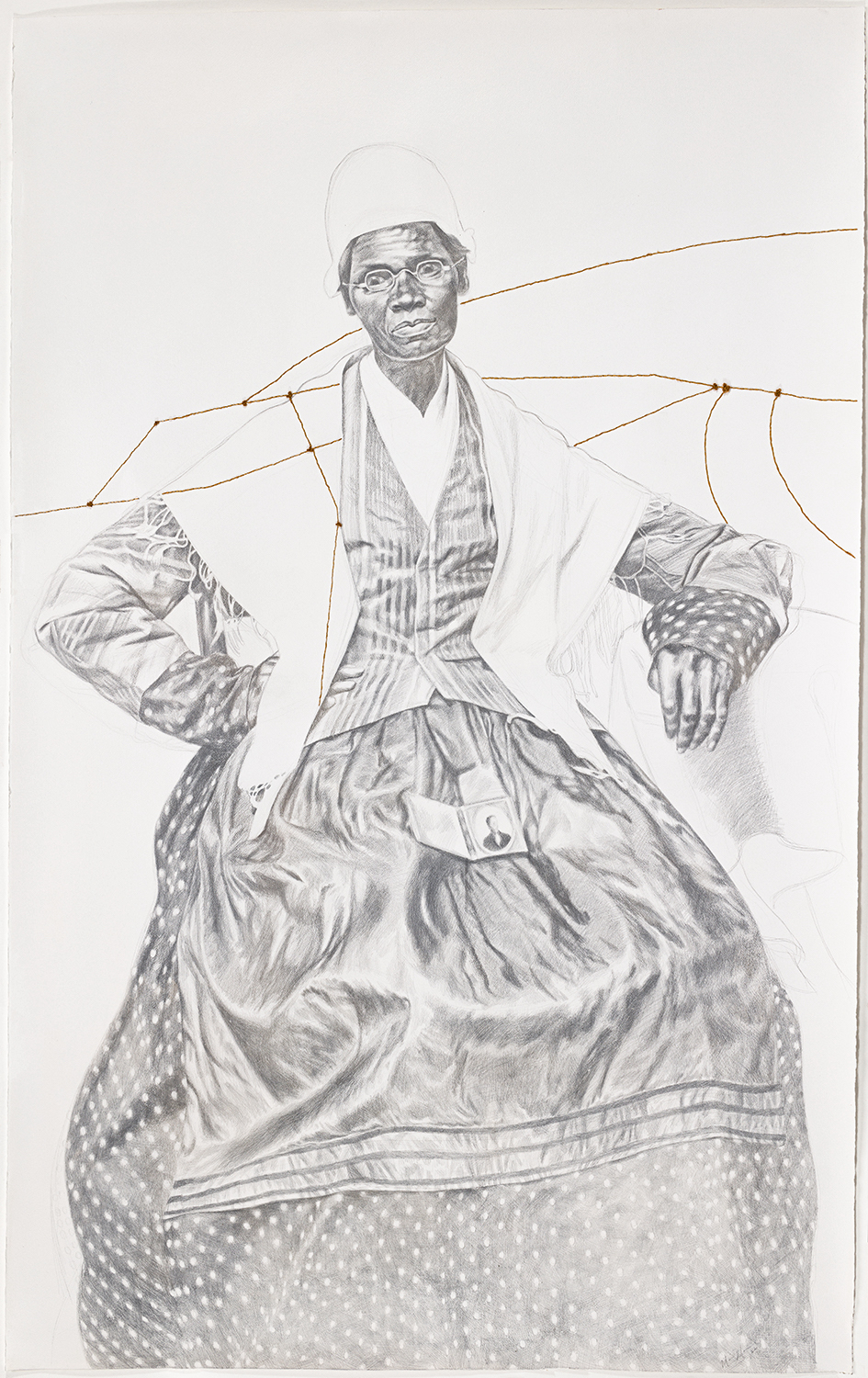 What may not be apparent as you walk into the gallery is that the entire show, in one way or another, is a tribute to the Underground Railroad and those hardy souls it ushered to freedom in Canaan – even the contemporary pieces at the front of the gallery.

Reading through “A Fluid Frontier: Slavery, Resistance and the Underground Railroad in the Detroit River Borderland” from Wayne State University Press (edited by Karolyn Smardz Frost and Veta Smith Tucker), Moore stumbled upon a married couple – Thornton and Lucie Blackburn — who escaped slavery in Kentucky and finally settled and prospered in Toronto. The artist calls their story a “cornerstone in my understanding of Detroit’s Black militancy,” and little wonder.

The Canadian Encyclopedia notes that the Blackburns made a dramatic escape from Kentucky in 1831, only to be recaptured in Detroit two years later. Miraculously, somehow the two were spirited from their cells and across the waters where they were re-arrested and threatened with being sent back to the United States. That prospect sparked riots on both sides of the border, and ultimately, a change in Canadian law to admit political refugees.

Rather than portraying the pair in historic garb, as Moore’s done with the silverpoint portraits, they’re a sexy, 21st-century couple lounging in bathing suits along the Detroit riverfront – a flight of fancy that somehow helps us see these intrepid souls more clearly than we might if they were outfitted in historically accurate, if distancing, petticoats and trousers.

Thornton and Lucie Blackburn in Canaan shows the recumbent Blackburns apparently enjoying a hot evening in safety along the Windsor riverfront, with Detroit looming – and erupting in flames – behind them. Lucie’s gazing up at the stars, while Thornton, hand on her hip, stares straight out into the Ontario night. 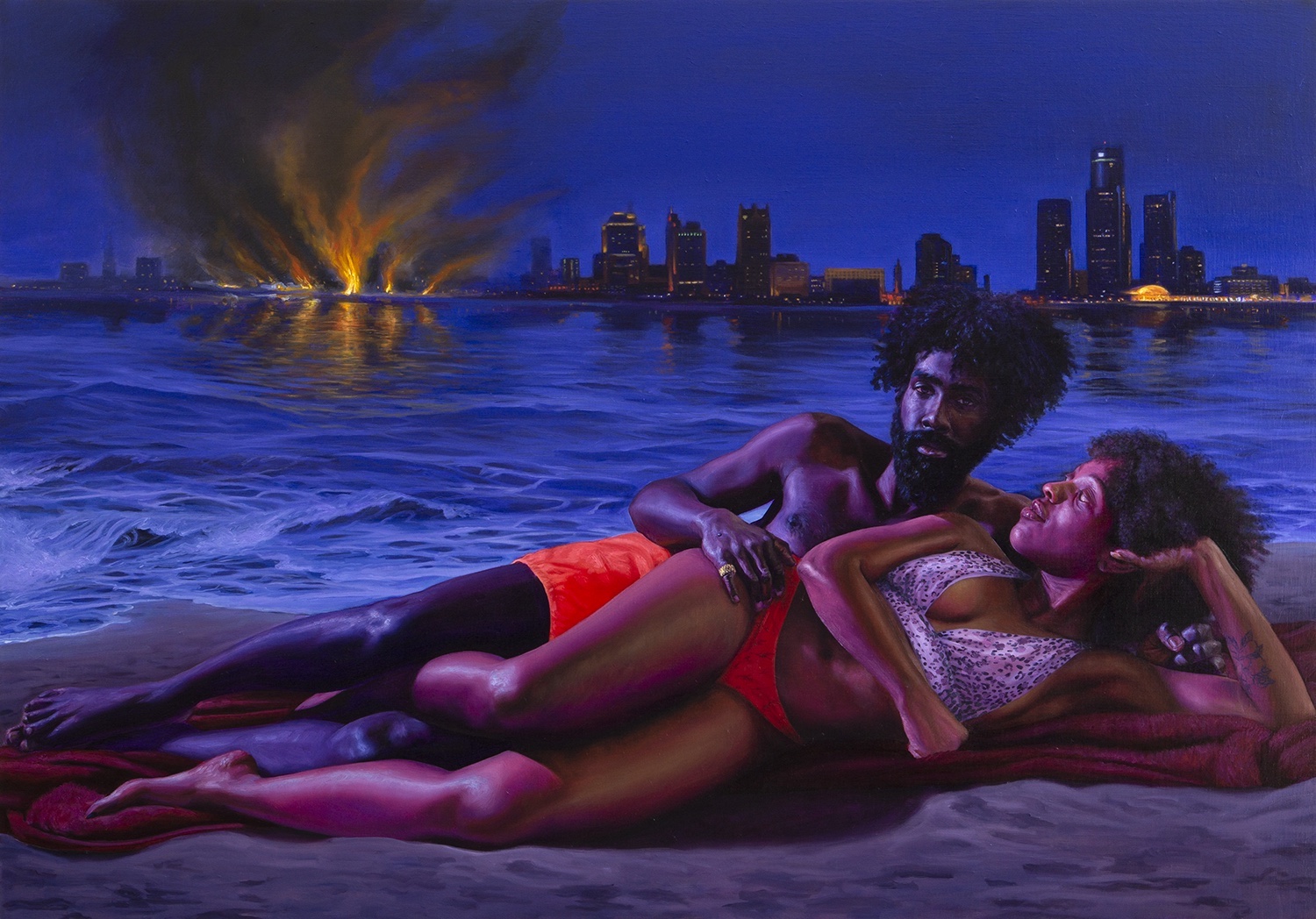 Social and political themes underlie much of Moore’s artwork, as with these heroes of the Underground Railroad. In 2018, when he was the Hodder Fellowship artist-in-residence at Princeton University, he produced “The Work of Several Lifetimes” — painting the college’s African-American service workers in the style ordinarily accorded to the great and famous.

With Midnight and Canaan, Moore tips his hat to “Black pioneers” in contemporary Detroit as well, singling out Detroit artists like the much-respected Allie McGhee and metalworker Tiff Massey, who was also a Kresge Artist Fellow. His portrait of her, Tiff Like Granite, What Up Doe, is especially compelling. Standing defiantly on rocks by the riverside in long black cloak, aviator glasses and red slacks tucked into boots, Massey looks, for all the world, a bit like a Revolutionary War war hero. 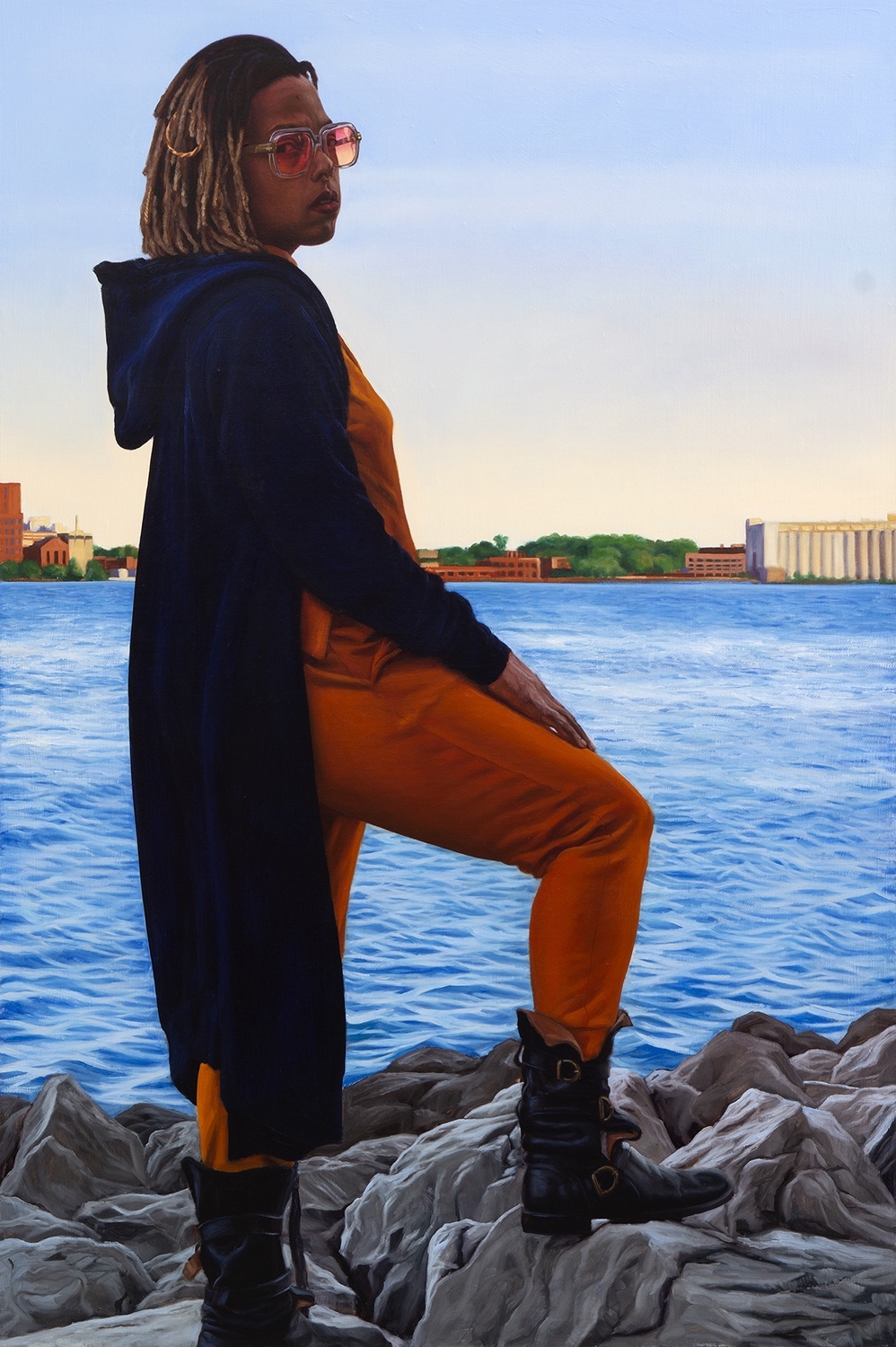 Rounding out his history of Michigan’s role in helping enslaved persons flee to Canada, Moore also paints two of the institutions – both churches – that played critical roles in the endeavor. His portrait of the Second Baptist Church, which was key to the freedom struggle, is about as heroic as a painting of a building can be. Lit by two outdoor lamps at night, the church positively glows with hope and promise. 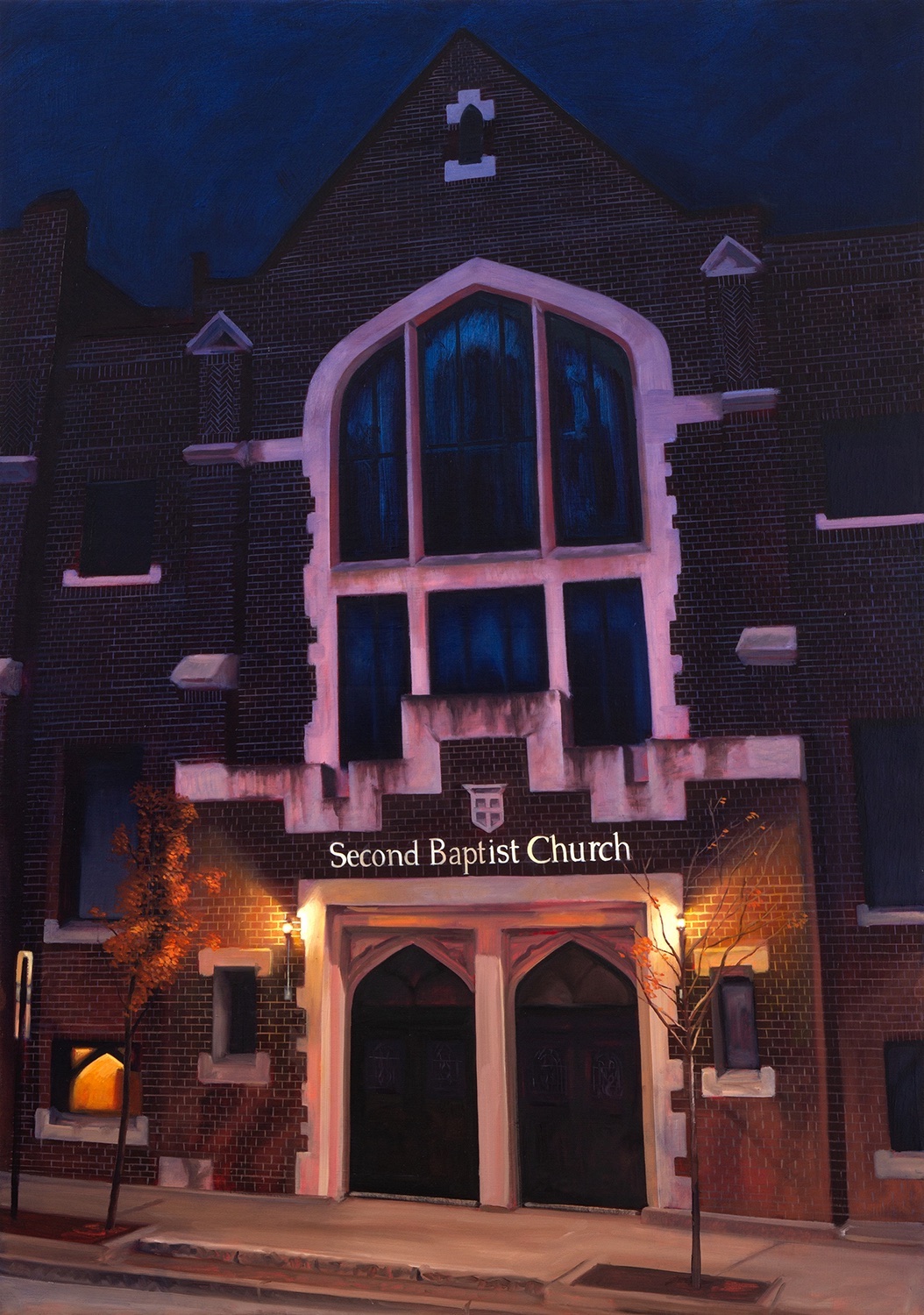 Finally, right at the front of the gallery above the reception desk, you’ll find Keep On Keepin On, Don’t Look Back, which is likely to intrigue and perhaps amuse all but the hard-hearted. Seemingly suspended a hundred feet above the Detroit River, with Renaissance Center and the Ambassador Bridge in the background, a nattily dressed couple – he in top hat and frock coat, she in a long red dress – walk slowly towards the Canadian Canaan, framed by dark wintry clouds. 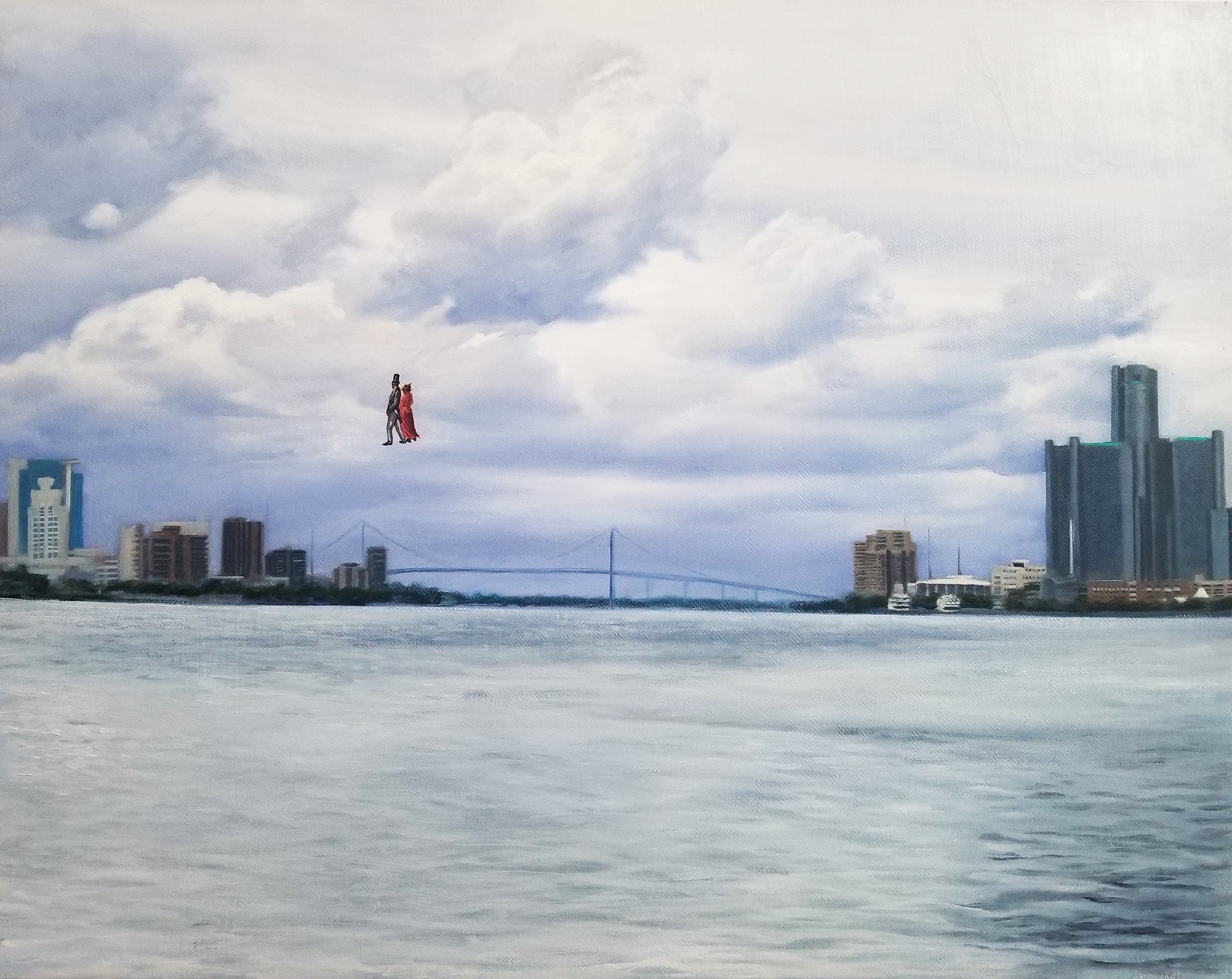 Midnight and Canaan will be up through Nov 5. A reception for the artist will take place on Saturday, September 24, 5 – 8 PM.

Midnight and Canaan, a solo show by Mario Moore, will be at Detroit’s David Klein Gallery through Nov. 5.