Critical Voices: Selections from the Hall Collection at OUAG 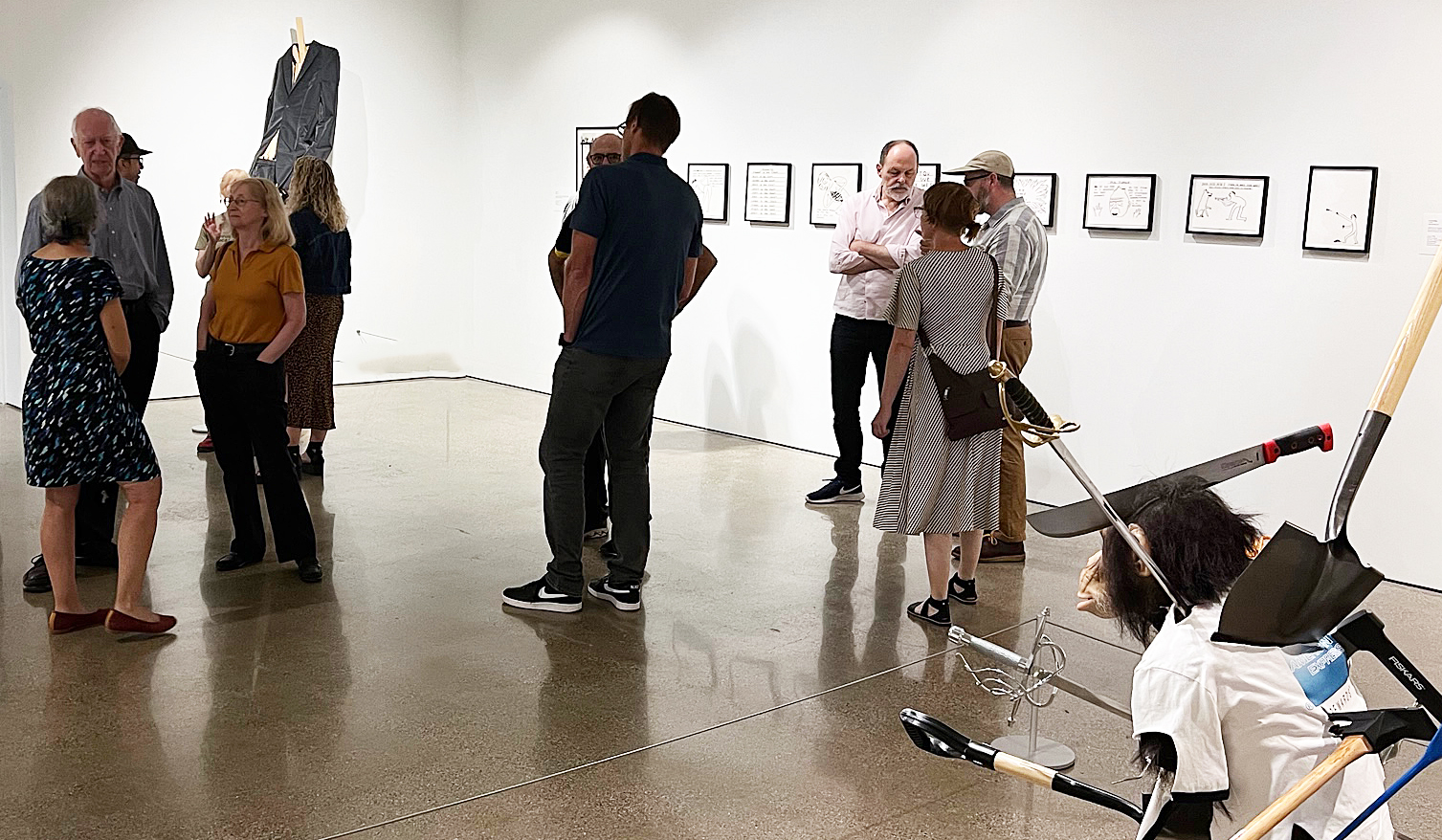 The Oakland University Art Gallery opened the fall season with Critical Voices: Selections from the Hall Collection on September 9, 2022,  curated by Leo Barnes, the new OUAG Gallery Manager.  This is Barnes’ curatorial debut, but he’s leveraging five years of prior experience working with the Hall Foundation and its highly respected collection of both American and German contemporary art.  He says, “The artworks, collected by Andrew and Christine Hall, present a unique index of the best contemporary art of the late 20th and 21stcenturies. It provides a window onto the complementary social conditions prevailing in two distinct continental spheres: Germany and the United States. 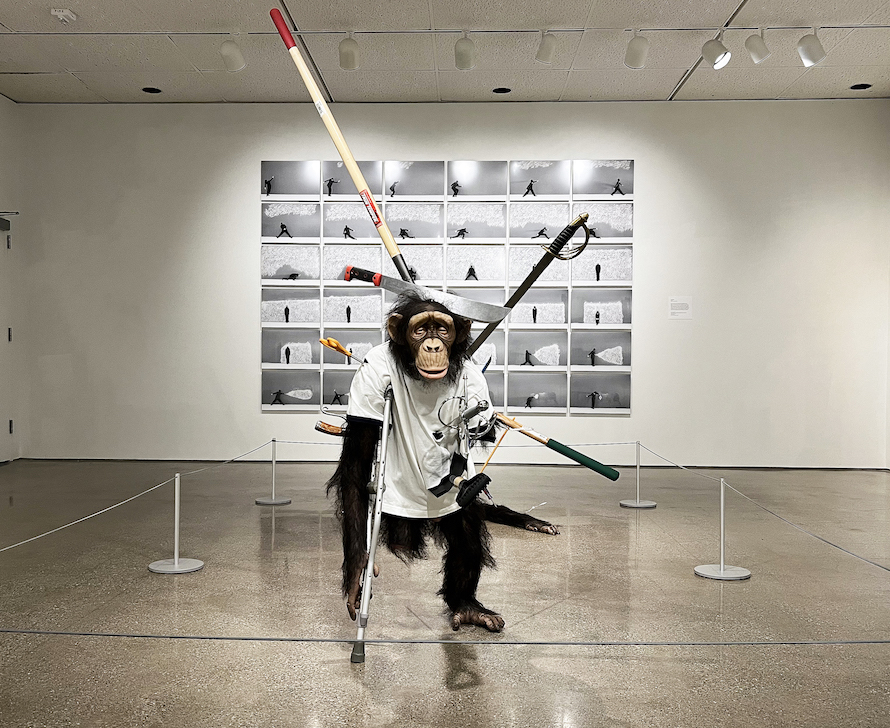 Tony Matelli is an American sculptor perhaps best known for his work Sleepwalker. He was born in Chicago and received his MFA from the Cranbrook Academy of Art in 1995. He now lives and works in New York City. He incorporates figurative, botanical, and abstract forms in his sculpture, creating uncanny objects that are both unsettling and comical.  Fuck’d up is a good example of these characteristics as it takes center stage in the OUAG gallery. Mr. Matelli has employed his formula of high-quality craftsmanship and lewd provocation, like the chimp being crucified using garden and household implements. Whatever the message, the artist leaves the viewer to interpret and make sense of the experience based on their own experience. 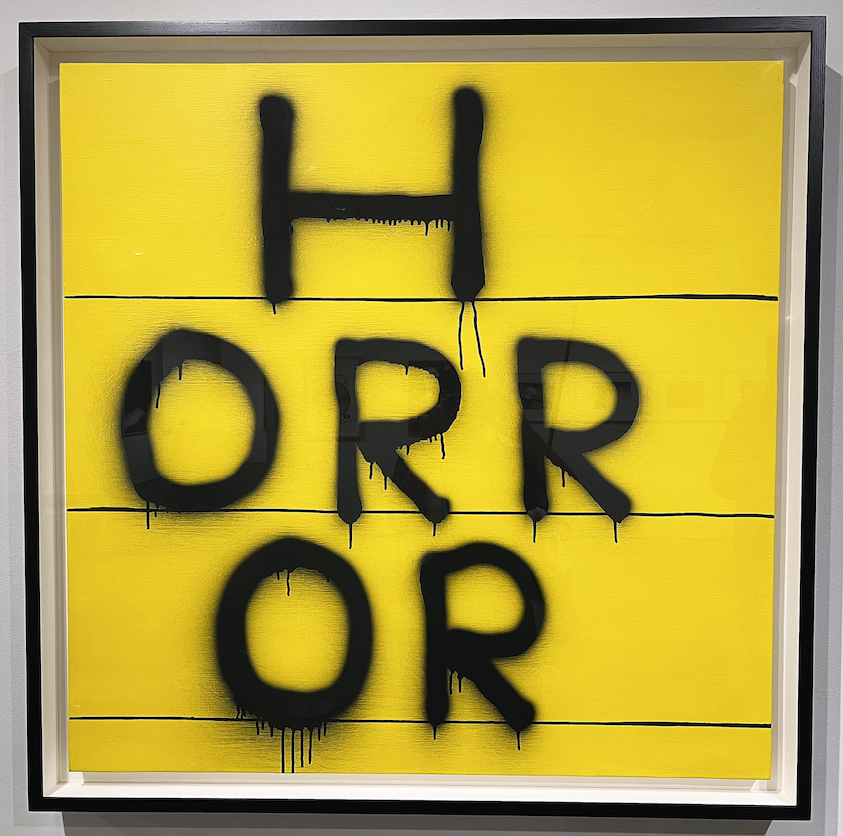 Horror is a kind of pop art with drips.  When you scroll through David Shrigley’s Instagram page, there is a continuous stream of simple, single images of objects, all using bright colors. A maverick and an artist working in multiple disciplines, David Shrigley is now considered one of the most significant figures in contemporary British art.  Making sense seems like nonsense is one way to describe his faux-naif work, which combines sweet childlike renderings with a sour, sardonic tone.   In January 2020, the artist was awarded the decoration of Officer of the Most Excellent Order of the British Empire (OBE). The British visual artist was born in 1968 and is now living in England after living in Scotland for 27 years. 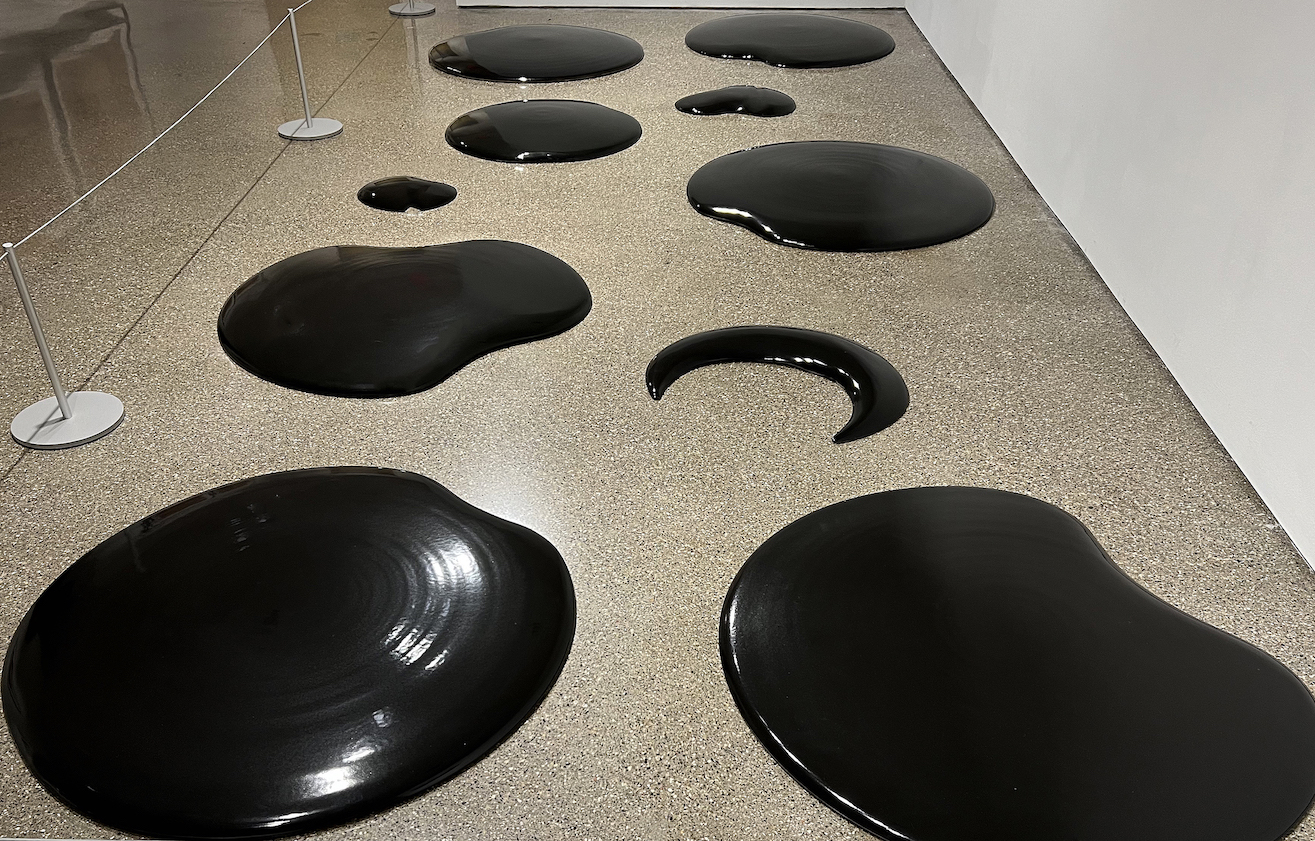 Oil Spills is an early piece by the renowned Chinese artist Ai Weiwei, a visual artist, dissident, and documentarian who is often referred to as the most influential artist of our time. Ai Weiwei was born in 1957 in Beijing. His father, the poet Ai Qing, was labeled a “rightist” in 1958, and Ai and his family were exiled, first to Heilongjiang in northeastern China and then soon after to the deserts of Xinjiang in northwestern China. Mr. Weiwei moved to the United States in 1981, living in New York between 1983 and 1999, where he briefly studied at the Parsons School of Design. His output over the past thirty years explores his ambivalent rapport with Western culture and with the culture of his own country.  Oil Spills is an example of his conceptual art that explores the social issue and the aesthetics of an oil spill. This short video documents his exhibition in New York City in 2017.   https://www.nytimes.com/video/arts/100000005490574/ai-weiwei-puts-up-fences-to-promote-freedom.html 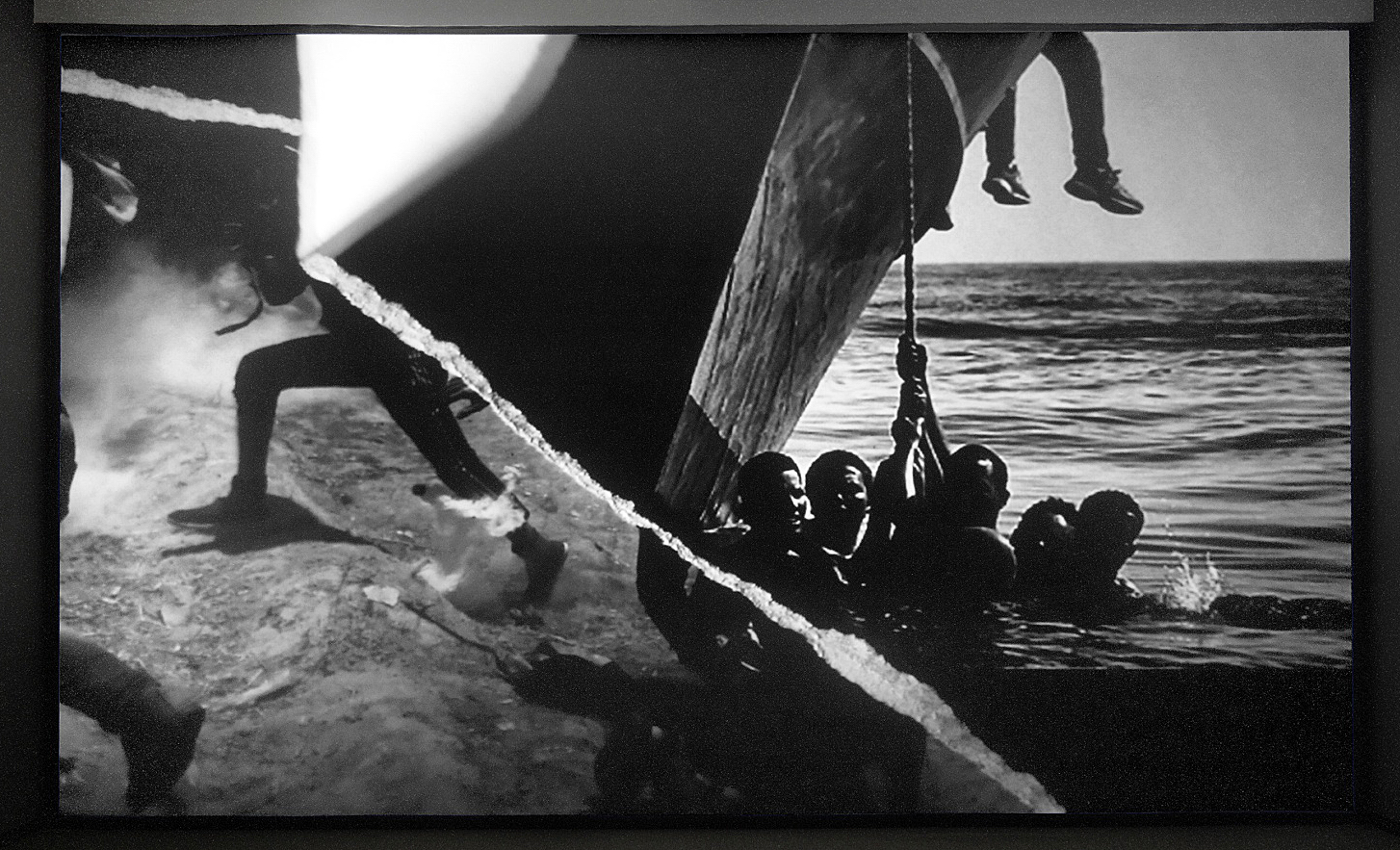 The video Icarus Rising from the title of the exhibition, Amerika, is the German spelling of America, where Robert Longo references the Franz Kafka novel that traces an immigrant’s journey from Germany to New York.  The nine-minute black and white video splices together images of torn paper and appears to be the artist’s first video work since the 1990s. The film features slowed footage of layers of printed photographic images, tweets, and headlines from news media being torn apart. The recorded incidental sounds of the tearing slowed in synchronization with the visuals, creating a soundtrack of groaning scrapes. The combined effect unsettlingly underscores the force, and often violence, of the actions captured in the images as well as the role the images play in shaping our world.  Sculptor, painter, and draftsman Robert Longo is well known for his bold drawings and sculptural works fusing pop culture and Fine Art. Longo attended the University of North Texas before deciding to study sculpture in New York; he later received a BFA from SUNY Buffalo. 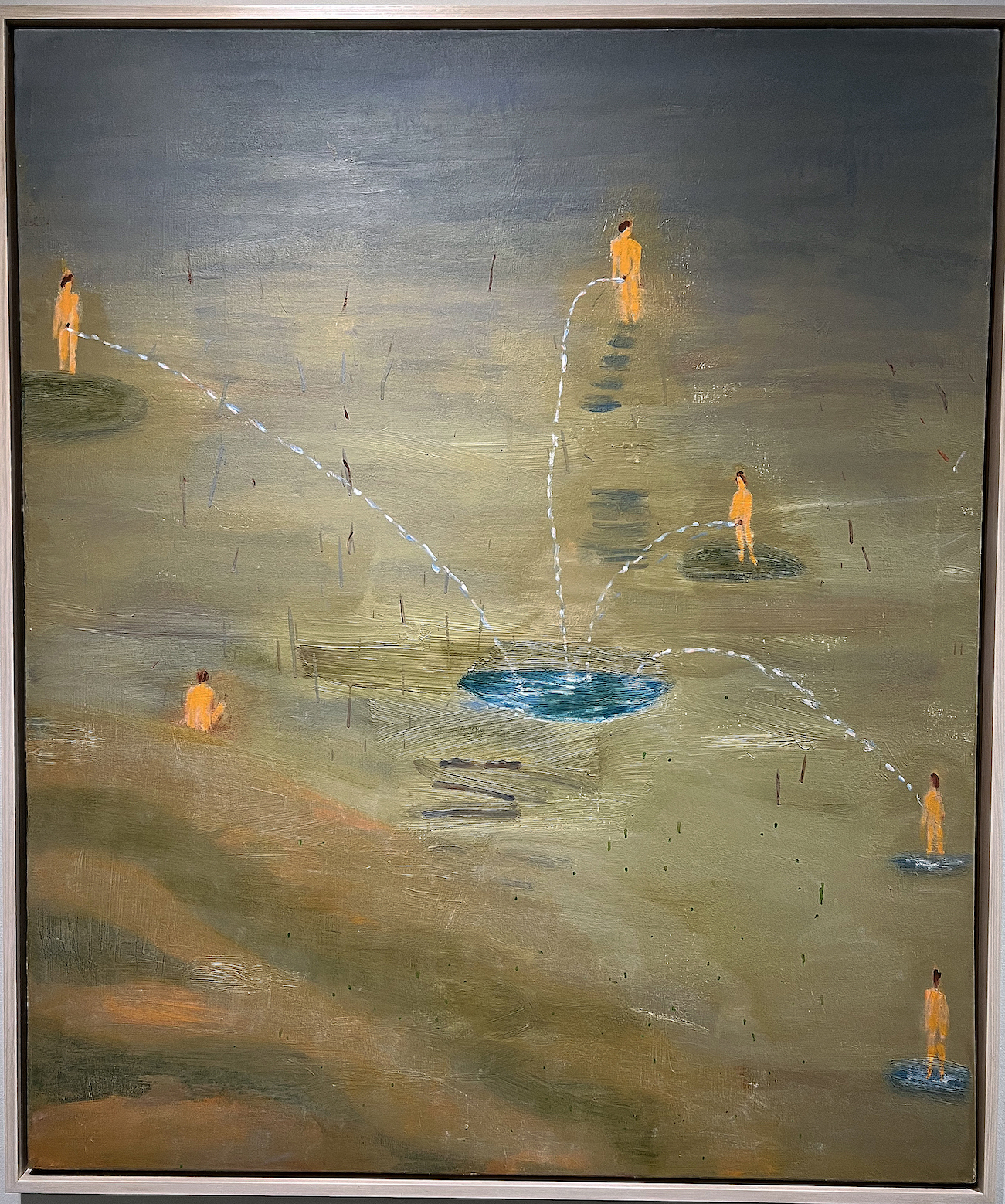 The figurative painter, Katherine Bradford, provides this lush, color-saturated, and metaphorical lake to the Hall Collection. She combines a theatrical sense of light with an oblique narrative. The work here in Beautiful Lake is a kind of romantic realism, whimsical and spacious.  Best known for her irregular grids and rows of dots spread out and around the figures, her representational work is meditative, laconic, and poetic.  Born in 1942 in New York City, she attended Bryn Mawr College and later received her MFA from SUNY Purchase. The artist currently divides her time between Brooklyn, NY, and Brunswick, ME. 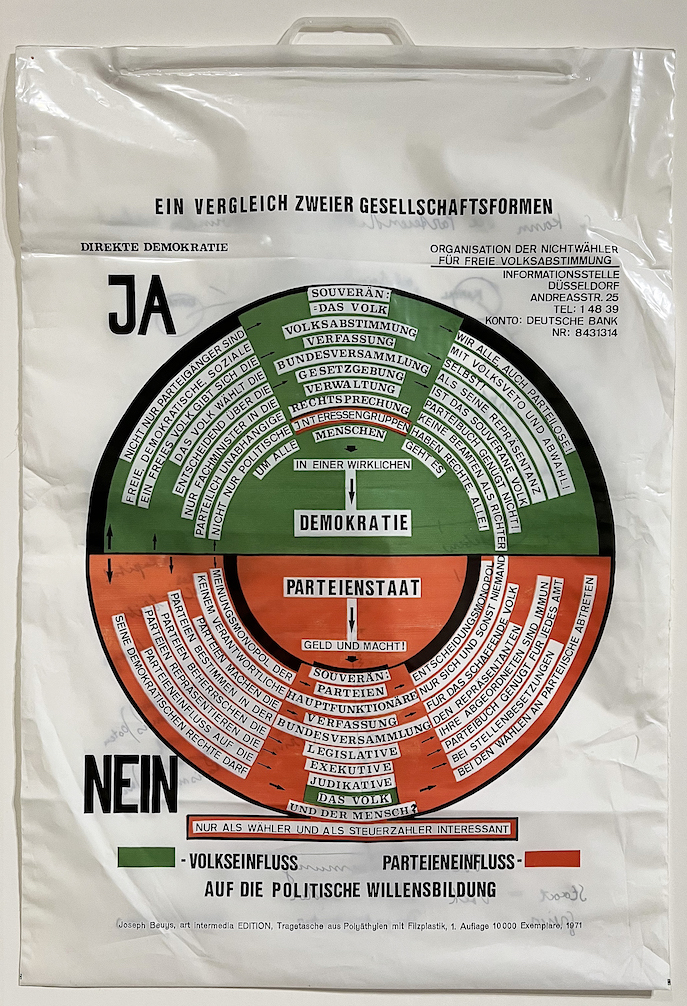 Joseph Beuys, The Dictatorship of the Parties Can be Overcome, Printed on a polyethylene shopping bag, 29.6 x 20, the Hall Collection.

Joseph Heinrich Beuys was a German artist, teacher, performance artist, and art theorist whose work reflected concepts of humanism, sociology, and anthroposophy.   He was a founder of a provocative art movement known as Fluxus and was a key figure in the development of Happenings.  The chart How the Dictatorship of the Parties Can Be Overcome was printed on a polyethylene shopping bag. It was produced by the Organization of Non-Voters Free Collective Referendum as a means by which to publicize their policies. The first diagram, which was originally hand drawn by Beuys, urges the replacement of political parties with a process of a direct referendum in German society.   Do you get the idea?  The complexity of his work is too large and long to mention here, but he says, “Only a conception of art revolutionized to this degree can turn into a politically productive force, coursing through each person and shaping history.” Joseph Beuys was born in 1921 in Krefeld, Germany, and died in 1986. After military service and time as a prisoner of war, Beuys studied sculpture at the Kunstacademie in Dusseldorf and served as Professor there from 1961 until 1972. 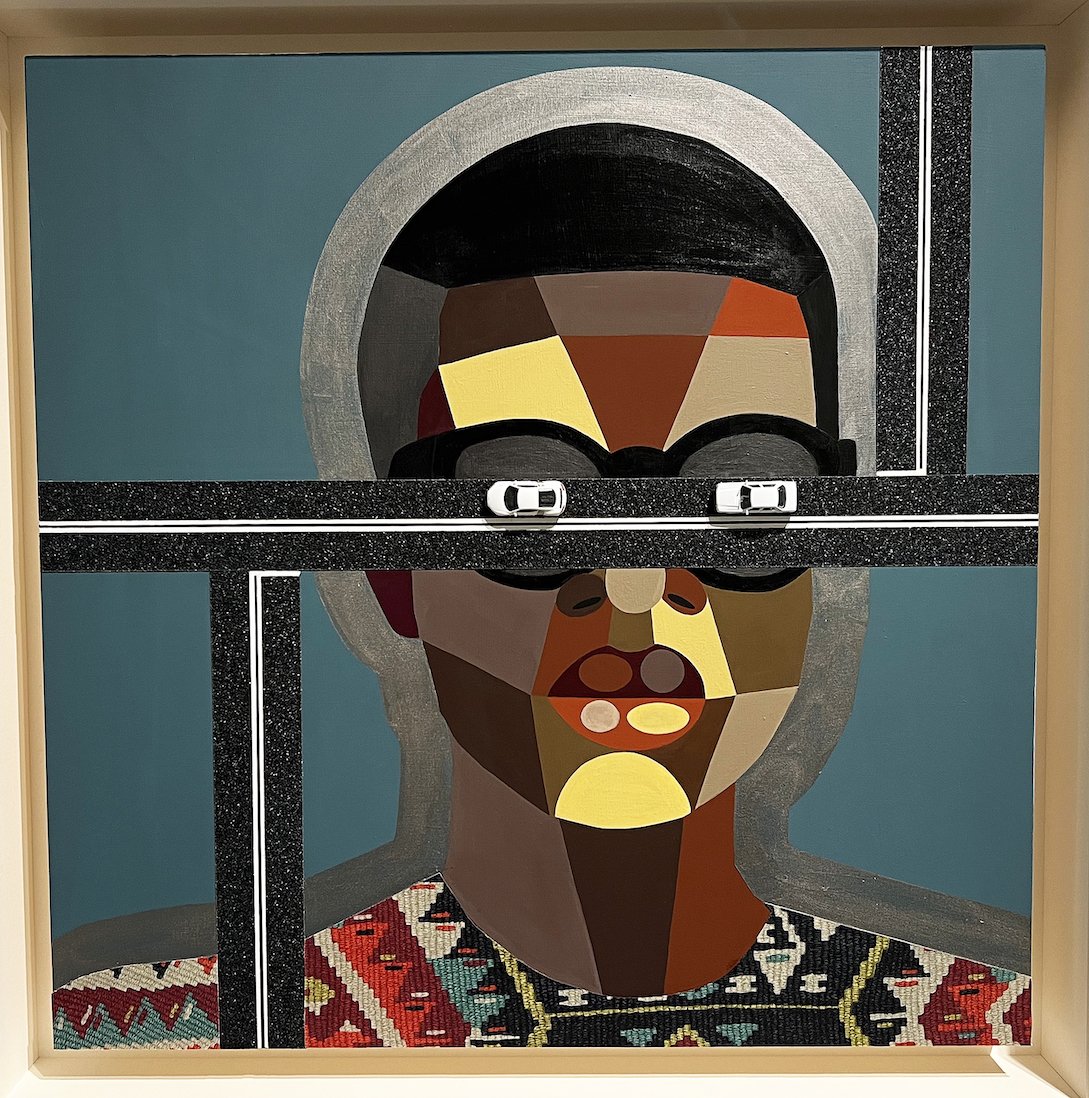 In Figure in the Urban Landscape 40, Brooklyn-based Derrick Adams employs the tradition of portraiture to navigate and reimagine life in an urban society. On matte and painterly backgrounds of teal, silver, emerald, and integrated earth tones, two miniature model cars traverse the open, perpendicular blacktop roads that cut the ends of the composition. Adams draws inspiration from pop culture, personal memory, and neighbors; he says, “I pay attention to everything, from store windows to people in cafes talking, to people on the corner communicating. I like to think about surroundings as source materials.” Adams received his MFA from Columbia University and BFA from Pratt Institute.