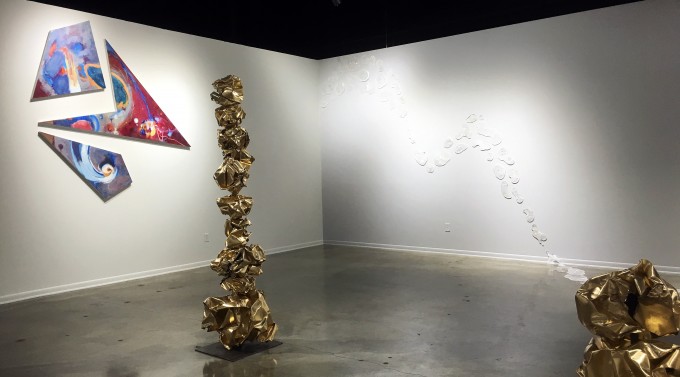 Aesthetically, the three-person show Cosmologies, which opened at the CCS Center Galleries on January 23rd and runs through the 27th of this month, reminds me very much of a Hubble telescope picture series of a formation called formation called Pillars of Creation in the Eagle Nebula—a star-forming region. Works by New York-based painter Assunta Sera draw directly from celestial events to create abstracted landscapes—or more accurately ‘spacescapes?’—and a full wall installation of spills of glass by Kim Harty touches down onto the floor, unavoidably suggesting the Milky Way, by association. These groups of (mostly) hanging pieces provide a lovely backdrop to four freestanding sculptural works by Detroit’s own Robert Sestok, which take pride of position in the center of the gallery. Using anodized aluminum gives a refined, gold cast to Sestok’s sculptures, more usually roughly rendered in crude iron scrap material, and creates a sense of weightlessness around the crumpled aluminum pillars—large-scale balls of metal stacked into well-balanced totem poles. 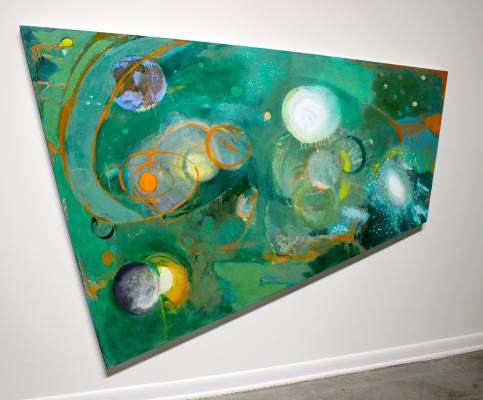 Assunta Sera, Fragments Near and Far, 2015, Oil on canvas

The effect is quite lovely; it is worthwhile to avail oneself of a bench that accommodates time to sit and let the space hang around the viewer. The work is not particularly confrontational, but aside from the seeming tableau of outer space, there are deeper connections at play. Sera’s rejection of the straightforward recto-linear canvas shape in favor of irregular trapezoids and indented triangles is very much in keeping with one of the foundational principles of painting in the Cass Corridor school, in which Sestok is rooted. 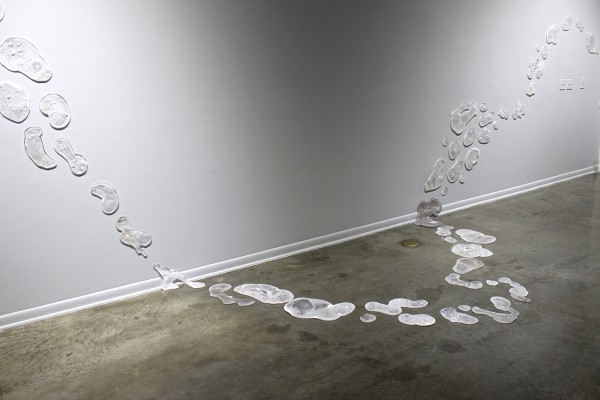 Similarly, Harty’s consideration of spills—for each piece of the installation is a frozen puddle of milky glass, arranged into a snaking pathway across the wall and floor—is dealing with incidental moments and commonplace events. Another tenant of the Cass Corridor school was the principle of dealing with materials immediate and available, and these spills, especially with their vague allusion to bodily or cleaning fluids, are an ultimate example of omnipresent daily reality. While the interplay of concepts and aesthetics can sometimes lead to friction, these objects and paintings coexist peacefully, forming a positive ambient space. Taken on their own, or set in another context, each individual body of work could have a different set of associations, but set together, they form a seamless environment. 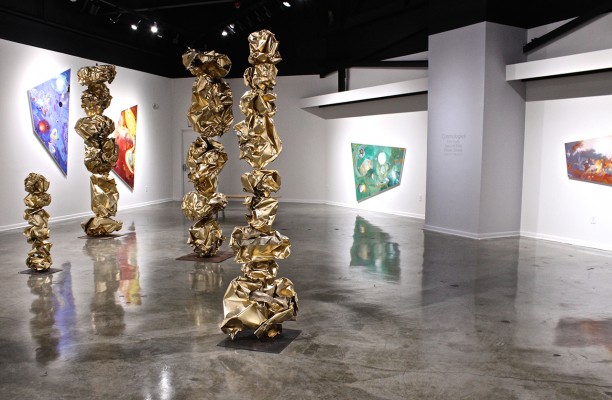 “I didn’t start out trying to make a pretty show,” says CCS curator Michelle Perron, in an interview at the Cass Cafe. “The exhibit began with a longstanding interest in Assunta Sera’s paintings, since the 1980s, when I worked at the Michigan Gallery.” An encounter with Sera at a recent CCS grad event triggered a conversation that built into the seed for a show, and a studio visit to review Sestok’s newest “fantastic” body of work brought that seed into sprout. When Harty came on as head of CCS’s glass department, Perron found a previously untapped appreciation for glass as a medium. “Normally you could not get me anywhere near it,” she said. Harty’s full-wall installation draws the whole exhibit together, bringing the show into bloom.

That this serendipitous combination of very different artists has created such lovely celestial synchronicity seems appropriate, given the show’s theme. Perron declares that she had never seen the “Pillars of Creation” before I mentioned it, and the face that a reasonable facsimile has manifested within the CCS Center Galleries seems to me evidence of a higher order in the universe. While Perron demurs to embrace such New-Age association, as a native Californian, I am entirely comfortable characterizing this group show as deeply cosmic.

No Boundaries @ the Charles Wright Museum