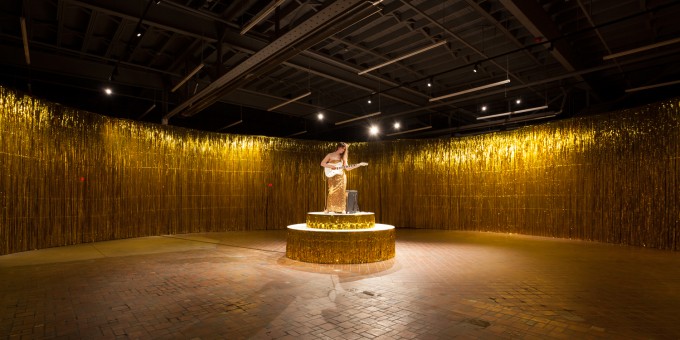 Ragnar Kjartansson – Installation 2016, All Images Courtesy of the Museum of Contemporary Art Detroit

The Museum of Contemporary Art Detroit’s cavernous galleries often echo with sound, from the frequent band shows in the café space (which is my current favorite place to drink coffee and catch up with my emails) and from the steady influx of multi-media works that always lend a distilling element to MOCAD’s exhibitions. Sound really is the cornerstone of MOCAD’s winter exhibition, most notably produced by a solitary, guitar-strumming lady seated upon a revolving dais in a large, empty gallery curtained off by gold tinsel streamers. This is “Woman in E,” a performance piece created by Ragnar Kjartansson.

Parting the gold curtains to enter the space, one is confronted with eerie, resonant chords and dim, sparse space that evoke the strange interstice after a party has ended, a telling shadow of the real action, which took place sometime before. Potent symbols of Motown, glitter rock and funk are all here, with the solemn, oracle-like figure strumming in E Minor (chosen for its melancholy, reflective effect) on an electric guitar as the focal point. 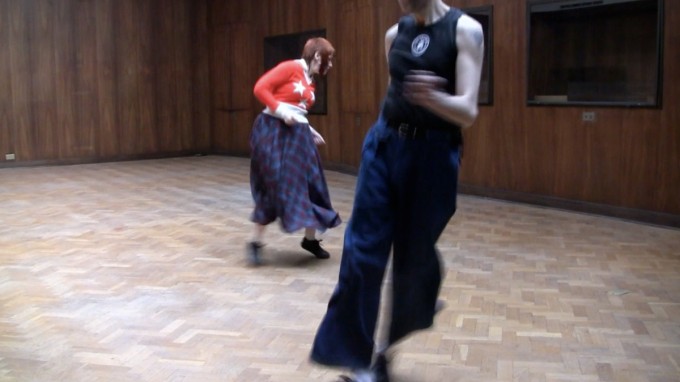 Film still from Dancing in the Boardroom (Turnin’ My Heartbeat Up), 2013. Chloë Brown.

The theme of after-party fallout and cultural epoch is approached as well in the film and drawing of Chloe Brown, who’s body of work exploring the youth culture and economic gloom surrounding the closing of a Spode ceramics factory in Stoke-on Trent, England pinpoints the essential relationship between music, movement and identity in the face of great loss. Brown’s film, “Dancing in the Boardroom (Turnin’ my Heartbeat Up)” depicts a young couple dancing to Northern Soul music in a spacious, dim room with beautiful parquet floors that once bore the weight of executives, secretaries and free enterprise. Shots of the abandoned Spode factory’s lush interiors and tremulous lighting stand in stark contrast to the couple’s unabashed joy in moving to this Motown-inspired music.

A dose of life on the street is supplied by photographer Steve Shaw. Shaw’s documentary-style images of Detroiters making their way with dance, dress, and grit in a constantly shifting urban landscape supply the unstudied immediacy that is stylized out of the other artist’s work. 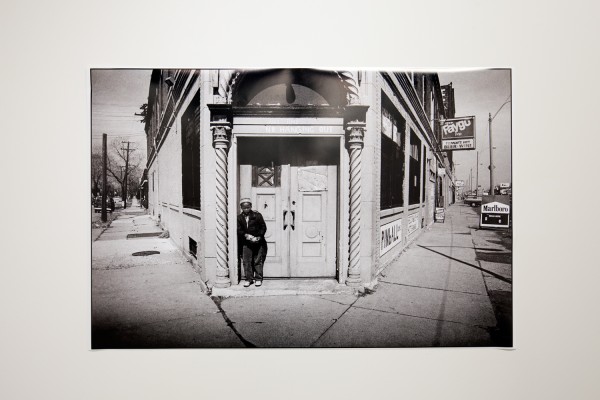 In a show anchored in performance, Shaw’s photographs depict people drawing from the same cultural well and making many of the same movements as the performers in Chloe Brown and Ragnar Kjartansson’s works, only in real time, with skin in the game.

The Winter Show is on display at Museum of Contemporary Art Detroit from January 15 through April 24, 2016.  http://www.mocadetroit.org