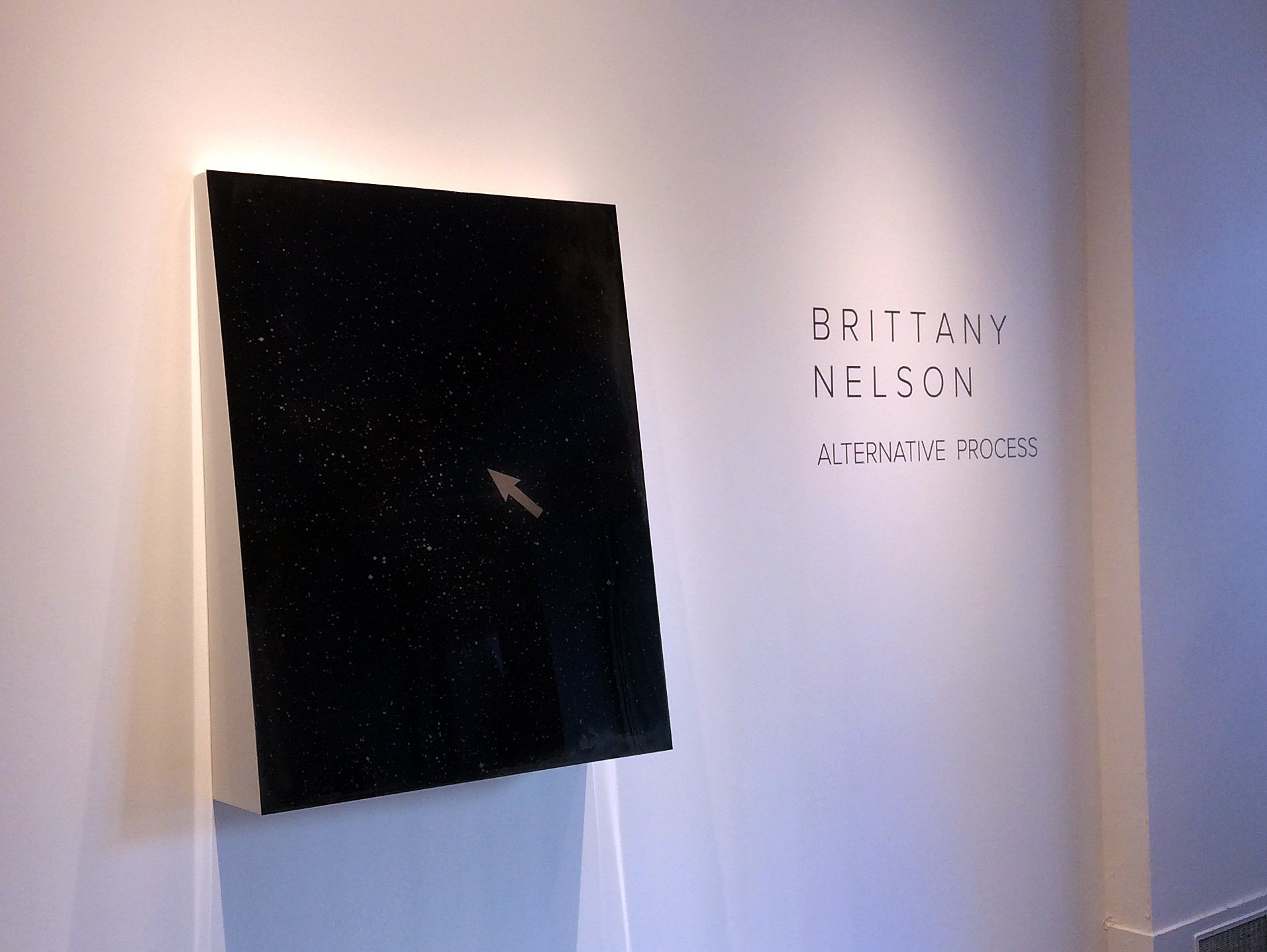 The newest pairing of artists on view at David Klein Gallery’s Detroit space, photographers Brittany Nelson and Susan Goethel Campbell, engage history, science, and formal beauty in ways that reveal what ancient knowledge and antiquated technology can tell us about the visual stake we hold- and the tissue-thin mastery we take for granted- over the natural world.

Brittany Nelson’s collages of “science graphics” and 3D Photoshop forms onto tintype prints (one of the earliest photographic mediums) follow a simple, clever formula of overlaying heavy, historic substrates (thickly mounted tintype photographic plates that warp out of foursquare precision and are often hung at a slight angle to the wall, visually reinforcing their whiff of memento mori and the slow melt of age) with graceful, feather-light graphics culled from contemporary modes of visual shorthand- graphics, grids, algorithms, flowcharts. 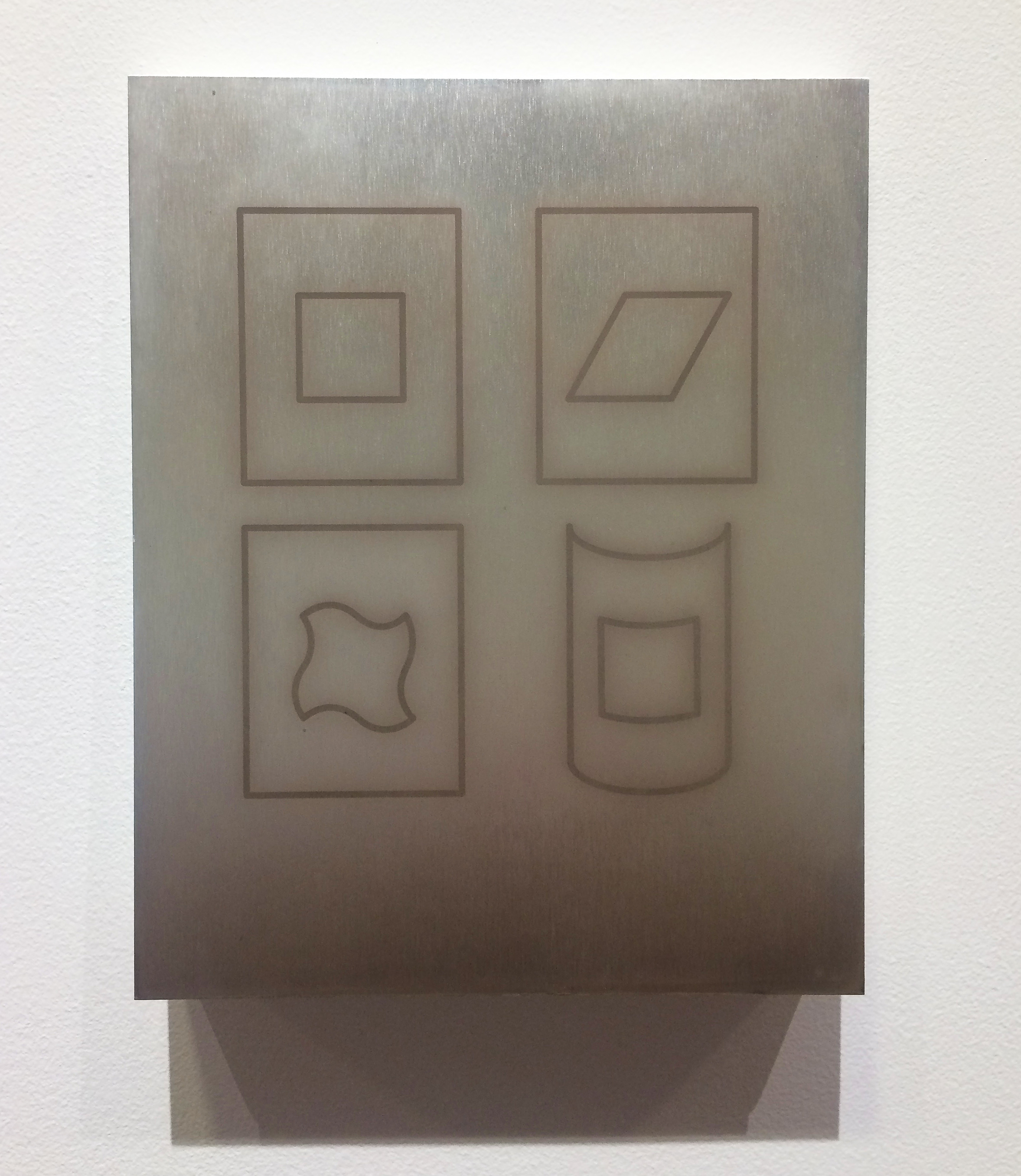 These two modes of information capture dance uneasily with one another on Nelson’s dark grounds- there’s a dissonance to seeing these fleeting, fast-moving graphics inlayed on such iron-clad media, designed to catch and house a physical shadow of a once real, living, or tactile thing. Nelson’s work resurrects something of the uncanny magic photographic technology once held for people in the Nineteenth Century- its strange promise of immortality, its mind-bending harnessing of modern science. 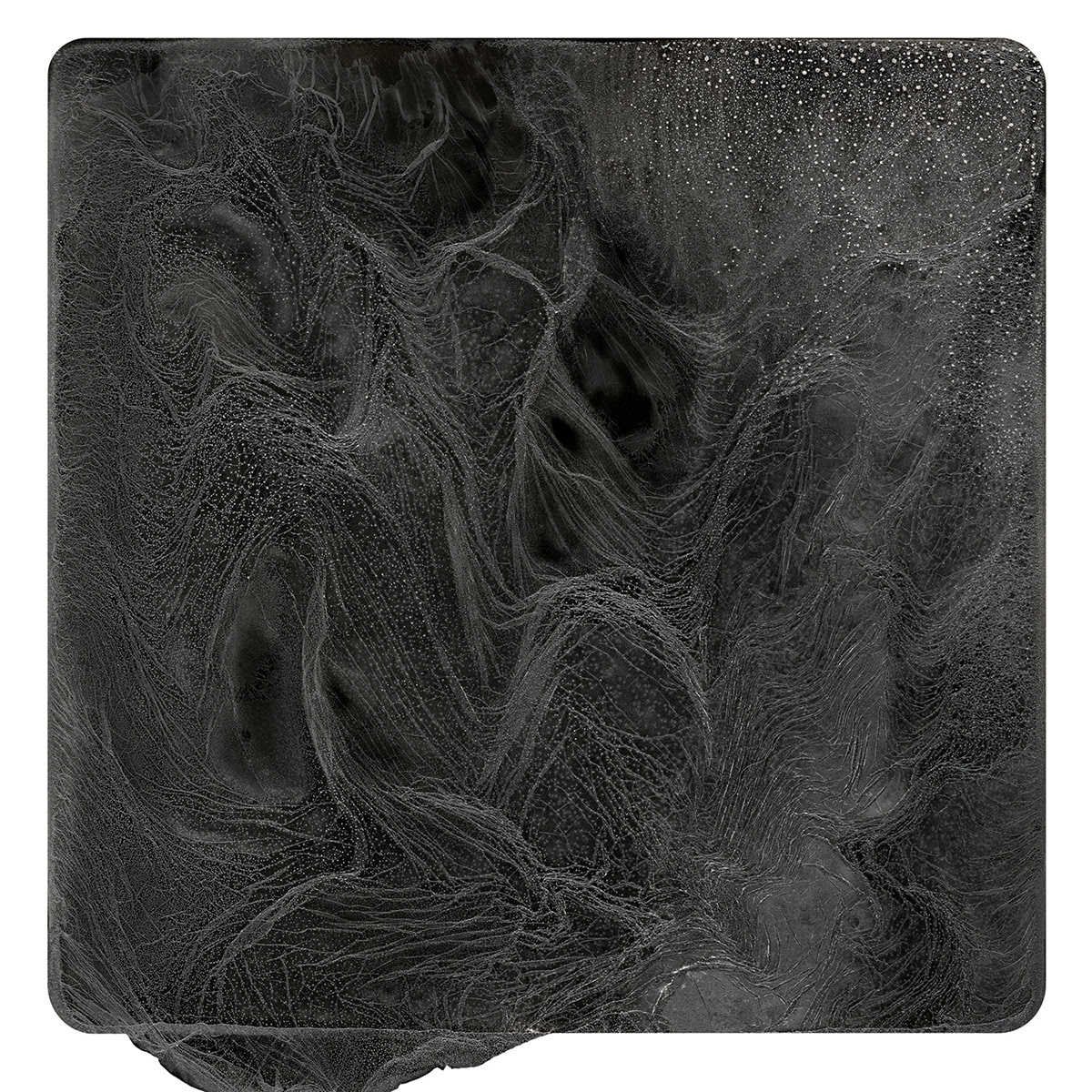 The dark, atmospheric voids characteristic of tintype photography find a visual dialog with Susan Goethel Campbell’s Chasing Venus. This work documents, in film and photography, a patch of sky over the Rocky Mountains in Alberta, Canada, during the Summer Solstice, when the moon appears to be following Venus across the sky. 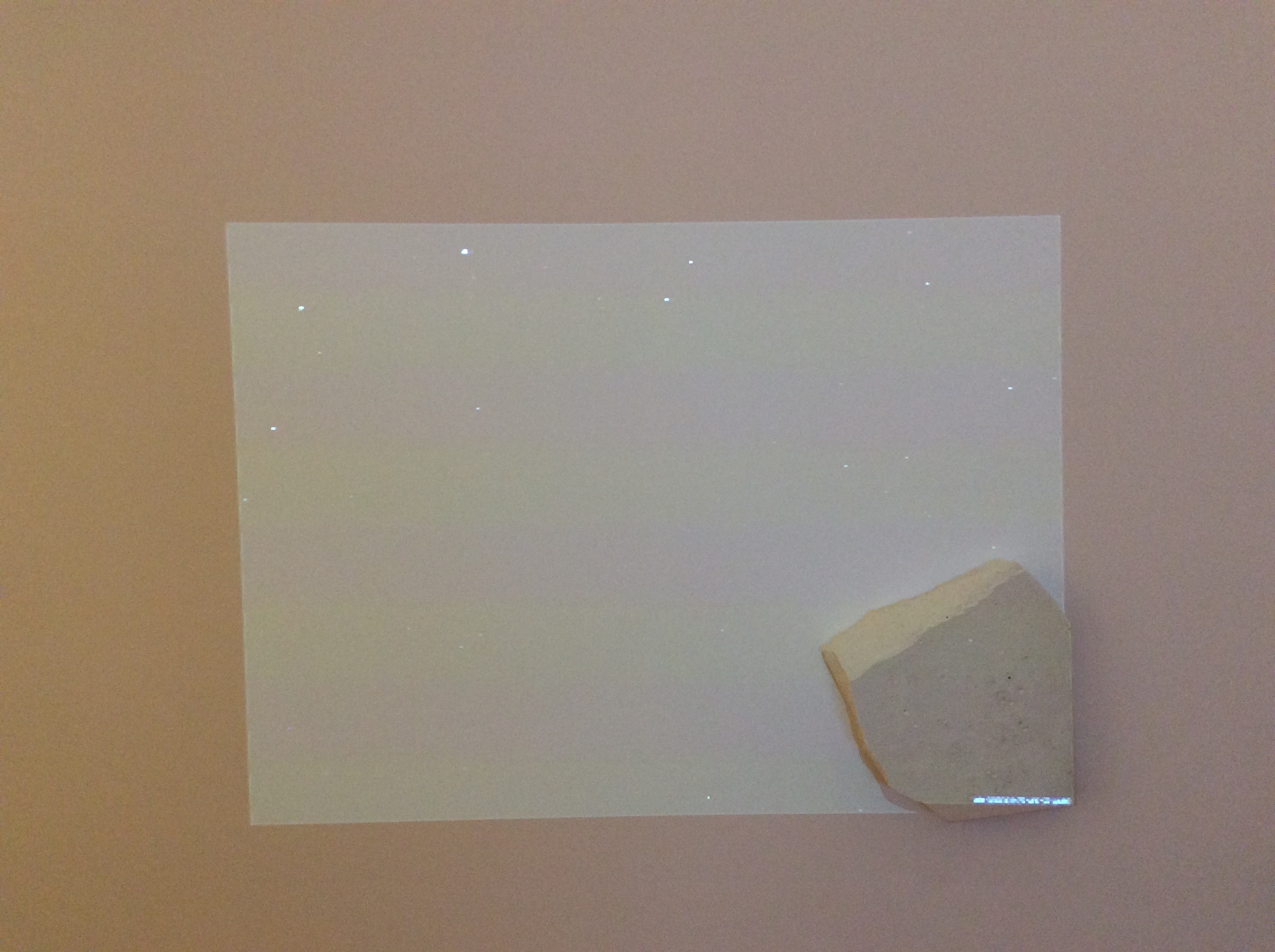 Campbell’s work documents, in solemn stills and dizzying, feather-light films, the turning of the planet from day to night, toward and away from an incredible full moon. The faceted surfaces of mountainous landscape, vast sky, and brilliant earth (her installation includes visuals that are nearly impossible to photograph, a video projection of time-lapse sky-scape dancing on a wall mounted with a chunk of granite, a pile of glittering mica poured onto a shallow shelf that casts uncanny tones of light onto every surrounding surface) utilizes straightforward modes of visual documentation to hint at the sublime- crystalizing, in moment-to-moment documentation, both our concept of linear time and the sublime impossibility of conceiving the clock of the universe. 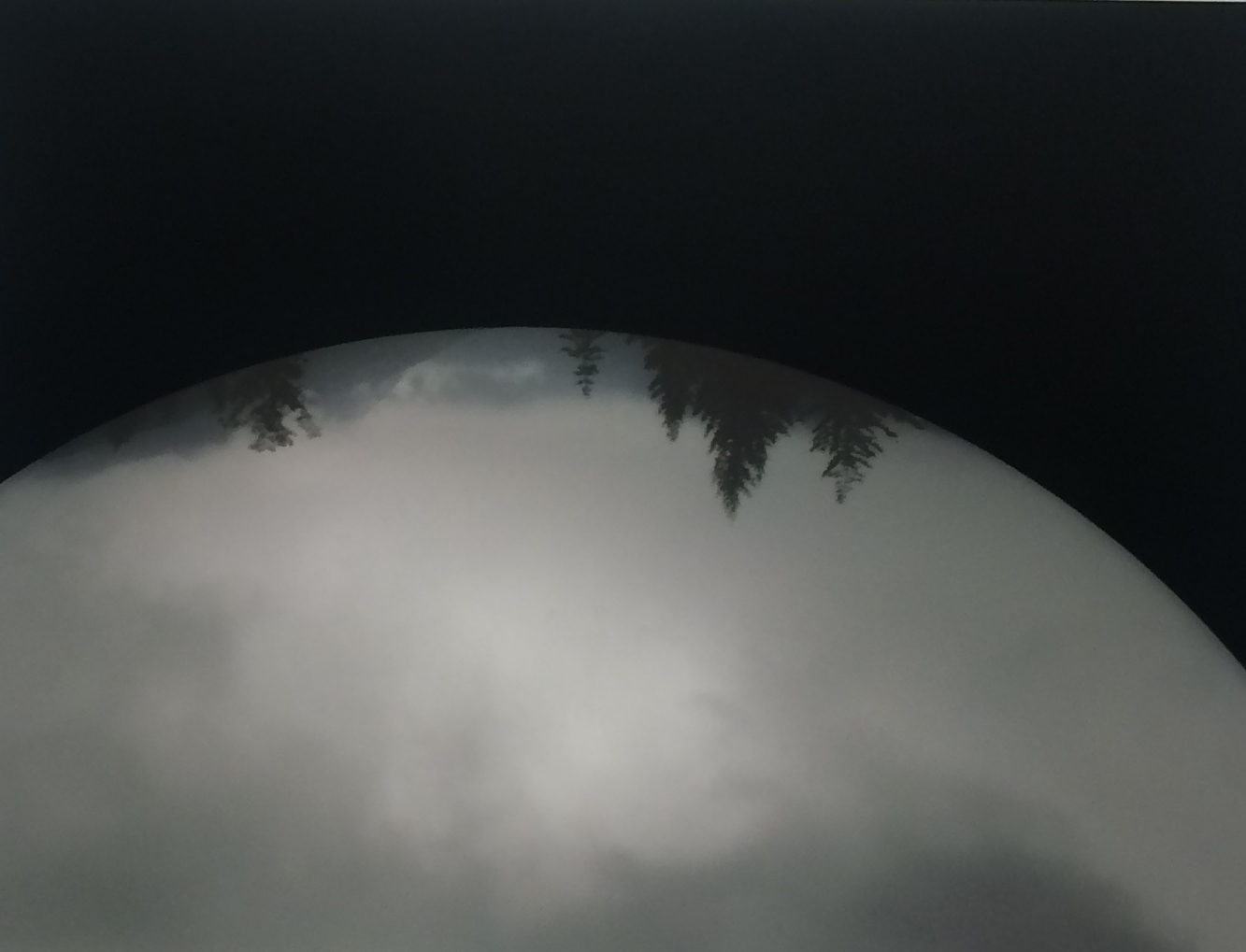 The kernel that unites Nelson and Campbell’s work in these dark, visually haunting twin exhibitions might be an “exposure,” manifested in the beauty and opacity of both artists’ combinations of technique and content, of the failure of such analytical, documentary methods to capture eternity. Watching the sky and drawing it into visual rhymes with small, shiny objects, as the ancients did, distilling the visible into frozen shadows, as more recent generations did, or collapsing the world into descriptive algorithms, as we do now, may, or may not, bring us any closer to a true understanding of the reason we are here, or why we’ve been given these abilities. Alternative Process and Chasing Venus do not attempt to answer this question- they cross-pollinate materials to broaden, deepen, and beautify its scope. 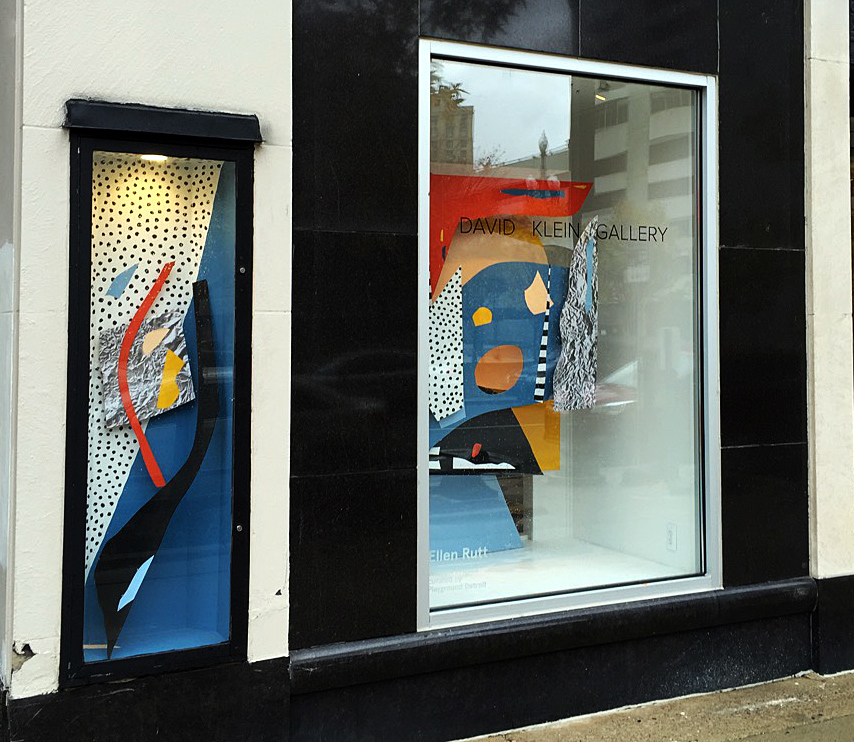