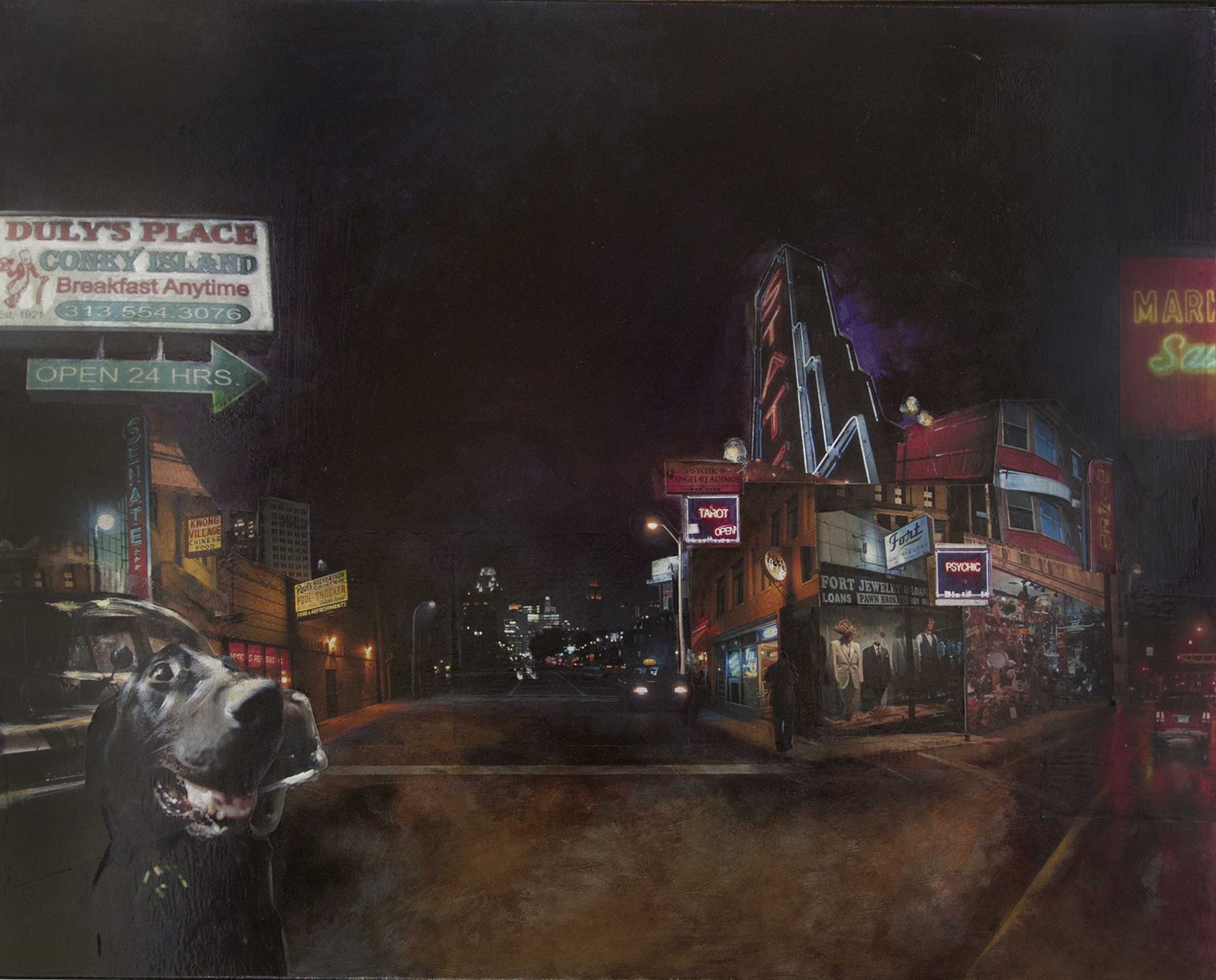 Two artists, Bowen Kline and Bruce Giffin, collaborated on several pieces of artwork for Jive Detroit, a two-person exhibition opening at Galerie Camille, January 20, 2017. In the 1920’s the word Jive referred to Jazz or Swing music, and was used later as jargon to describe a kind of teasing or putting someone on. In Jive Detroit, Kline and Giffin are working together on several photo collage/paintings. What is compelling about this collaborative work is the obvious coming together of a photographic image combined with painting to form a kind of expressionistic realism of mostly urban settings in and around Detroit.

Gallery Director Melannie Chard says, “Jive Detroit is a collaboration between photographer, Bruce Giffin, and painter, Bowen Kline. With access to 30 years of Bruce’s photographs, Bowen has constructed mixed media paintings that forge impressions of a city in constant change and the many faces of its residents.” 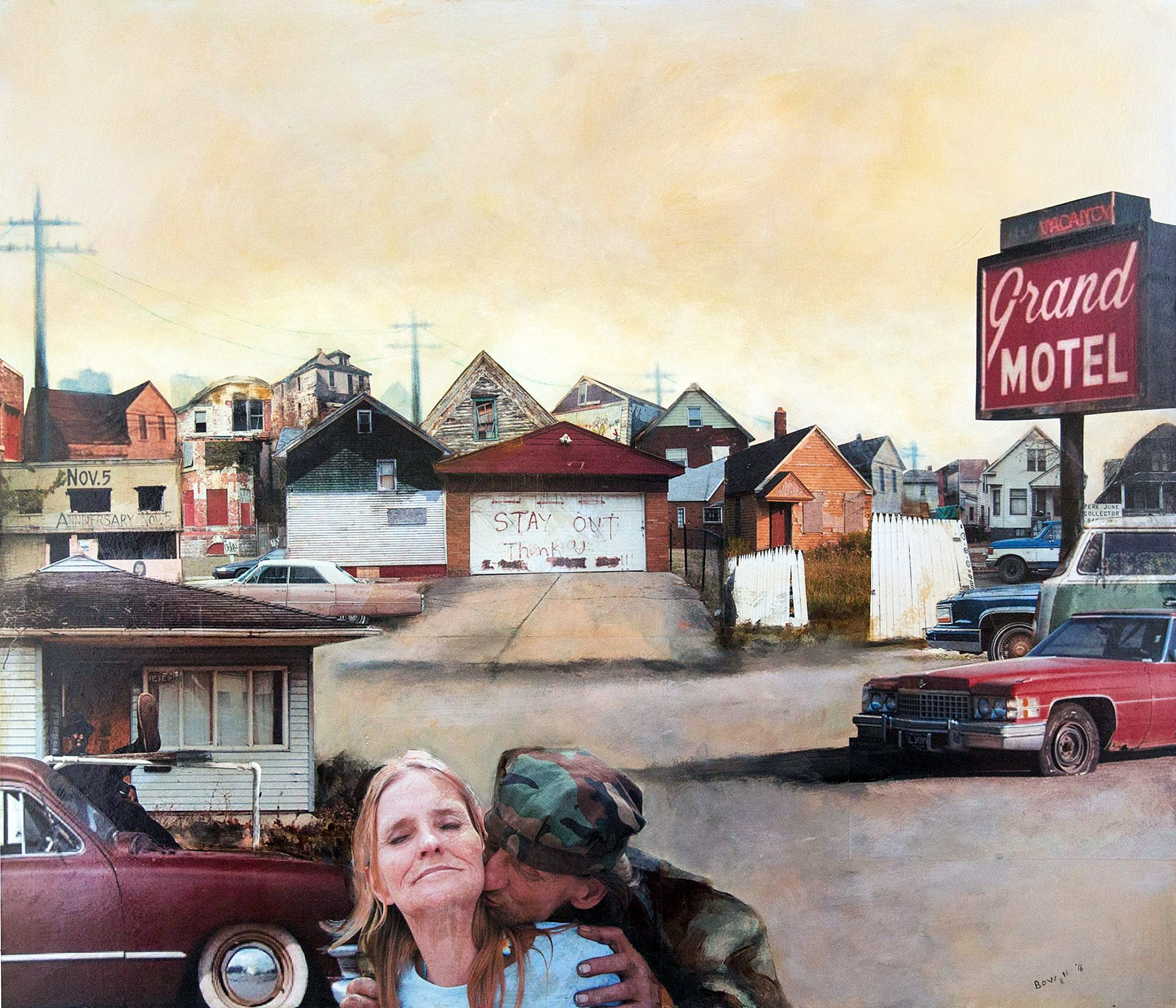 This approach differs entirely from what Photoshop can do in a digital environment, where it is used to combine a variety of images into one photographic image. There is no trickery attempted here. I am not sure what comes first in this collaboration, the photo images or the idea for a painting, but it doesn’t matter. It is an example of the synergy that can come from collaboration. In the work Neighborhood, it is the combination of “capturing a moment” between the two figures and the depth of field in the urban housing environment, laced with graffiti, that draws the viewer in. 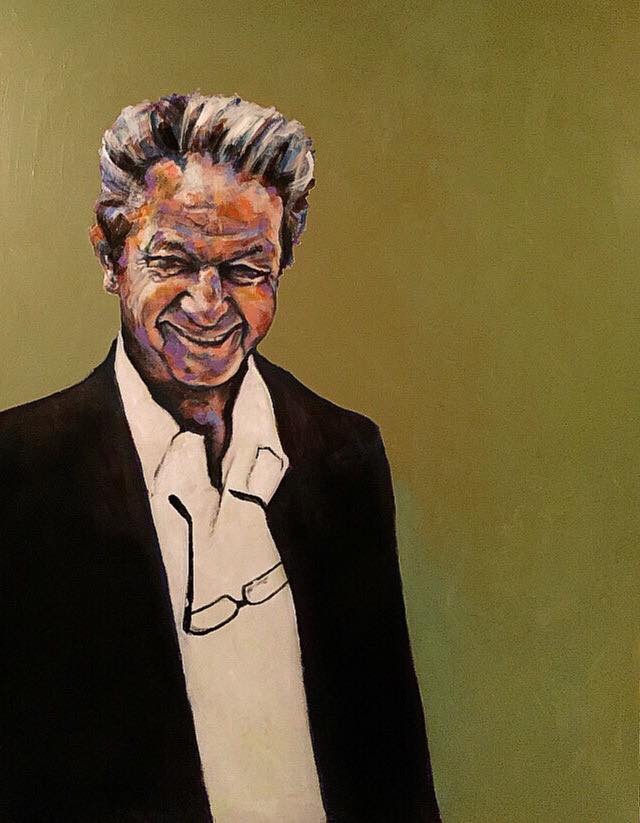 Bowen Kline, Portrait of Bruce Giffin, Oil & Acrylic on board, 2016 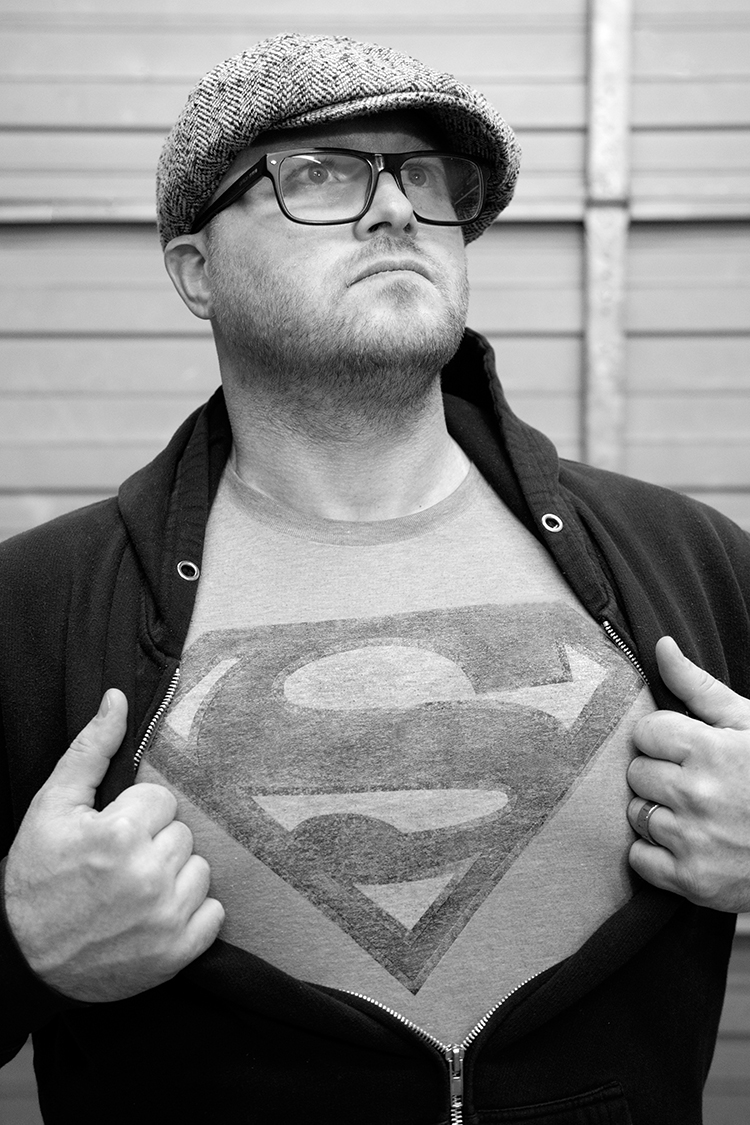 I guess that the idea of collaboration with Bruce Griffin was Kline’s idea as this is not the first time he has sought collaboration. In 2013 he exhibited with Tony Roko. Both artists worked on primarily figurative paintings at the Janis Charach Gallery located in the Jewish Community Center in the Detroit Metro area. He relies heavily on black line and contrast, using a combination of oil and acrylic paint. Painting from a studio barn in Romeo, Kline’s work is dominated by expressive portraits and subdued figure paintings.

Bruce Giffin has been shooting images in the City of Detroit for 30 years and was the recipient of a Kresge Fellowship in 2011 for visual art, largely based on “The Face of Detroit,” featuring evocative, hyper-close portraits of Detroiters. He must have walked the backstreets and alleys of Detroit for years to capture many of his personal images of ordinary Detroiters and desolate buildings. I first wrote about his image, Black Board Jungle, which does a good job of reflecting his interest in capturing abstraction in an exhibition at the Detroit Artist Market. That image is also in this exhibition. He has worked as a staff photographer along the way, shooting covers for the Metro Times, and for a long list of publishers, where Giffin has provided product and people images. In addition, he has a collection of infrared images, like Winter Coaster, that is included in this exhibition.

I hope this exhibition is not jiving us, and instead highlights and reinforces artistic collaboration, something we frequently experience in the fields of music, film, and dance. In the end, this show illustrates a young painter collaborating with a seasoned photographer to create something new. One plus one equals more than two in this situation, but to be constructive, and in the long haul, Bowen Kline will have to stand on his individual work, something that Bruce Giffin has already accomplished.