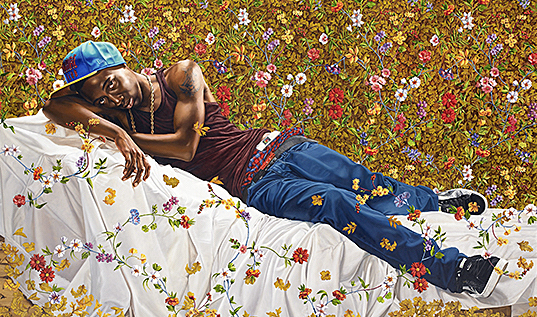 From the few works I saw back then, I was unable to ascertain the larger and broader work of Wiley, that is until his current exhibition at the Toledo Museum of Art, which just opened a large retrospective of Kehinde Wiley, A New Republic, on February 10, 2017. The exhibition presents sixty paintings, sculptures and stained glass works curated by Eugenie Tsai, the Curator of Contemporary Art at the Brooklyn Museum, and is a traveling exhibition.

When I first saw the work in Detroit, I asked myself: Is this about the scale of portraiture with decorative backgrounds? But one needs to see the scope of this exhibition to realize this is not about scale, as there are many small and intimate paintings that dispel that first impression. Wiley had taken his early study of art and acquired experience from undergraduate school at the San Francisco Arts Institute and combined it with an MFA from Yale to begin a crusade. 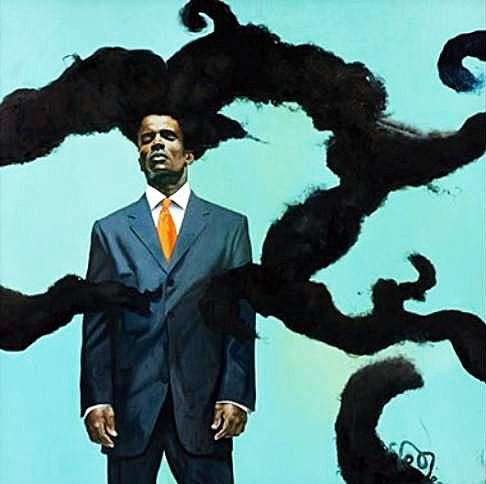 Entering the exhibition, it was the painting in the first room, Conspicuous Fraud, Series #1, from 2001, Wiley’s last year at Yale, that I went back to after seeing the entire exhibition. The work seems like a major departure, a step forward that puts him on a trajectory that he develops and elaborates on over the next fifteen years. The painting is larger. We see an African American male in a suit with meandering black clouds. He notably breaks with the picture plane, clouds in both background and foreground. The larger than life figure in this painting disturbs the tropes of portraiture painting and intentionally elevates the subject’s status, juxtaposed to all preexisting social stereotypes. The road ahead is established and paved here in 2001. The idea of portraying young black men in power positions, be they political, social, or religious, will become Wiley’s focus, beginning in the United States on the streets of Harlem, but eventually expanding to include Senegal, Dakar, Rio de Janeiro and Mumbai, ultimately to become what Wiley would describe as the World Stage.

With his accomplished technical set of tools in hand, at Yale the issues that honed his perspective would be discussions surrounding identity, sexuality, gender and symbols of political power. The exhibition A New Republic focuses on African American males, Old Master portraiture and backgrounds, and then moves on to African American women, stained glass and sculpture. 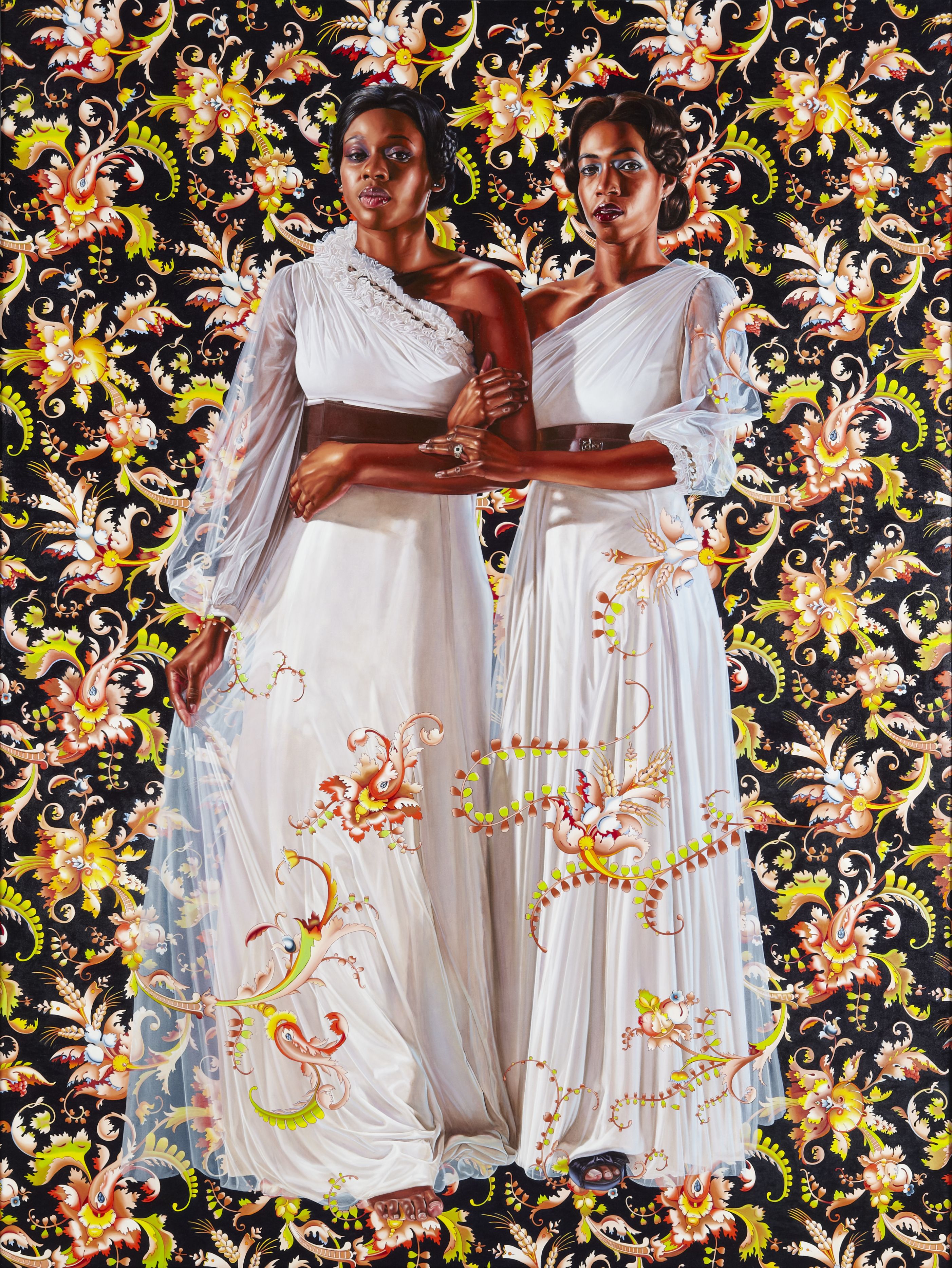 “The magnitude of this exhibition will impress even those familiar with Wiley’s work,” said Brian P. Kennedy, TMA director, president and CEO. “He has taken the grandeur of portrait painting and translated it with his portrayals of contemporary African American men and women. Wiley bridges the gap between traditional portraiture and our daily lives, and in doing so, he raises questions about identity and how we perceive ourselves and others.”

Growing up in South Center Los Angeles in the late 1980s, Wiley began studying art early on, spending time in museums and seeing how the figure was presented over the last three hundred years. Africans were depicted as slaves, then servants, and ultimately as drug dealers, gang members and inciters of violence.

Wiley says, “Painting is about the world we live in. Black people live in the world. This is my way of saying yes to us.”

What seems to develop gradually is a complex multi-layered approach to his feelings about the lack of African Americans depicted in a positive way. He uses scale, Old Master settings, elaborate background patterns, and changes to the picture plane, all part of his tool bag to express the beauty and grandeur of normal people, something that has become his passion. He expands exponentially to include women, sculpture, stained glass and smaller paintings framed as if they were part of a cathedral altarpiece. All of this is an effort to attack the lack of existing works that depict African American subjects in a positive way. He has taken on the mission—I began by referring to it as a crusade—as one man, one artist, to fill the void in the complete history of Western Art. 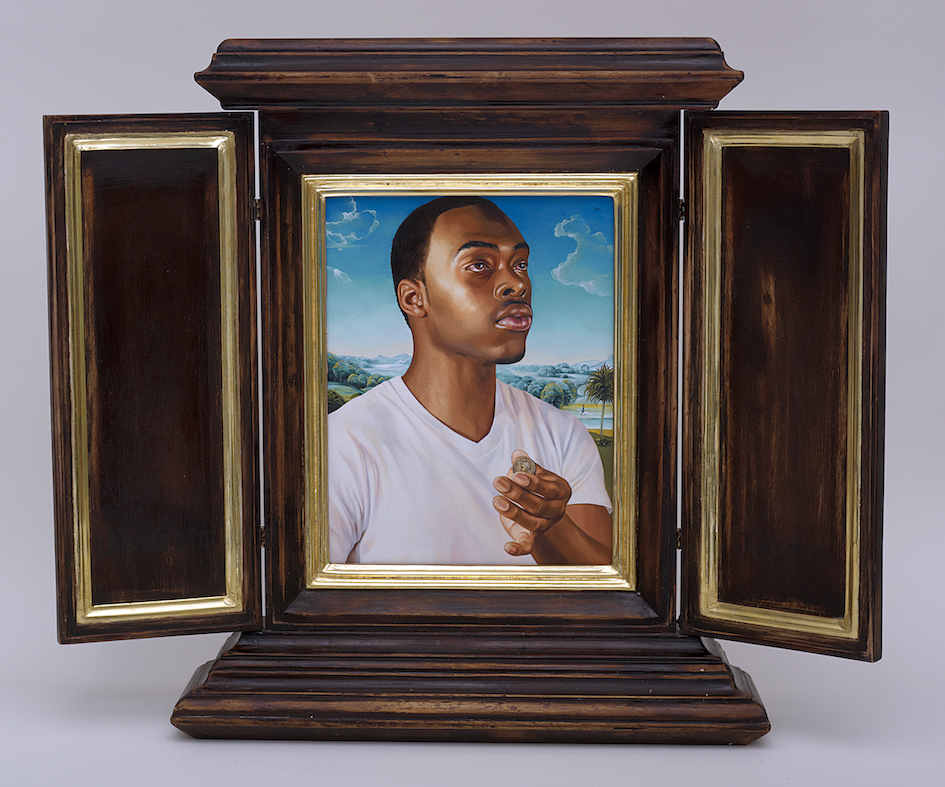 Wiley comments, “What I wanted to do was create a body of work in which empathy and the language of religious and the rapturous all collide in the same place.”  What does the coin he holds say? “In God We Trust?” On closer observation, it replicates the Roman coin used in Hans Memling’s Man with a Roman Coin, 1471, oil on a panel.

Wiley says, “There is something to be said about the power of smallness. As an artist who is in love with the material practice of painting, I can’t help but be amazed every time I look at Hans Memling’s small panel portrait…the simplicity of the small mark made well.” 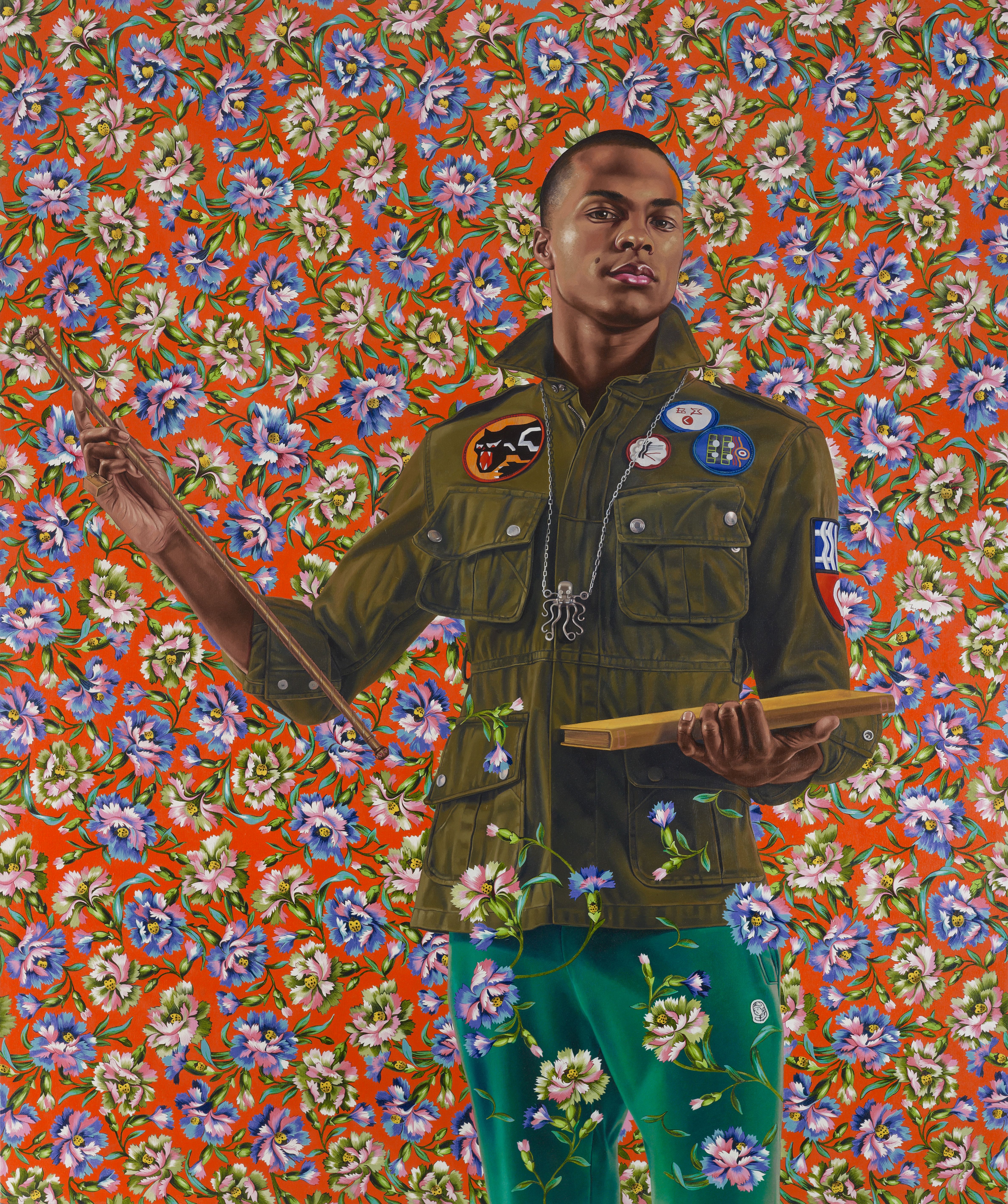 An aspect of Wiley’s portraiture painting is the issue of his breaking the picture plane, using the background and then bringing it forward over the subject. This goes back to paintings by the Old Masters, where there was a sense that it was necessary to preserve the integrity of the picture plane, to provide a flatness under and above the illusion of three-dimensional space, a technique discussed by Clement Greenburg in his essay “Modernist Painting” in which he talks about this concept being used in modern art as well. Wiley knows this all too well and intentionally works against this concept to say to his viewer, this is not photorealism, in case you were wondering. The element is playful, colorful, spatial and defiant.

Kehinde Wiley seems inspired by historical paintings of aristocrats and royalty where he uses his models—many cast in the streets of Harlem—and has them do dress-up for his photo sessions. My guess would be that he begins with high-resolution images captured in the studio with the precise control of light. The images are then projected onto a large linen canvas where the drawing begins, including the intricate backgrounds, using skilled assistants to save time. He probably works with oil paint primarily on the figure(s), while the antique and wallpaper-like backgrounds are painted using others.

Looking back through art history at paintings by Titian, Gainsborough and Ingres, Wiley projects heroism onto his black men and women as subjects who are missing from the history of Western art. He has developed his own distinct vocabulary from these Old Masters settings juxtaposed with these young, quintessential models. A New Republic, as a state in which supreme power is held by people through their elected representatives, is code for new representatives missing from our past.

Wiley delivers these skillful masterpieces to provoke a conversation about gender, race, politics and religion.