N’Namdi Center for Contemporary Art opened two exhibitions on February 17, 2017: Emerging, which showcases the three-dimensional work by Artis Lane, and BLU BLK, the photography of Stephon Senegal. Known for representing African American artists, the N’Namdi Gallery has selected a young photographer from Brooklyn, New York, whose work explores the human form, often juxtaposing two images against each other, and a well-known sculptor from Los Angles whose work is prominent in famous social and political collections from New York City to Los Angeles. 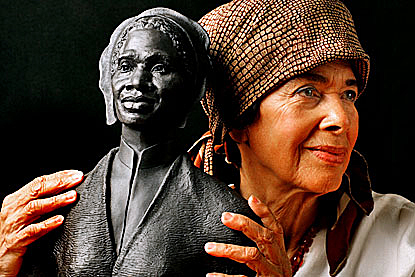 Portrait of Artis Lane, and bronze sculpture of Rosa Parks

Born in Ontario, Canada, Artis Lane attended the Ontario College of Art, and later Cranbrook Art Academy in Bloomfield Hills, Michigan. The sculptor has worked in the foundry for most of her life’s journey, working in bronze to create figures and busts that often convey a metaphysical message. Lane has been honored by the Smithsonian National Portrait Gallery with an installation of her bronze portrait of civil rights leader and long time friend, Rosa Parks.

In a statement she says, “My Civil Rights images led me naturally to ideas about what and who we are outside race. I went from there to the most important body of work, the metaphysical images of a generic man and generic woman emerging out of the ignorance of material concepts and evolving into spiritual awareness.” 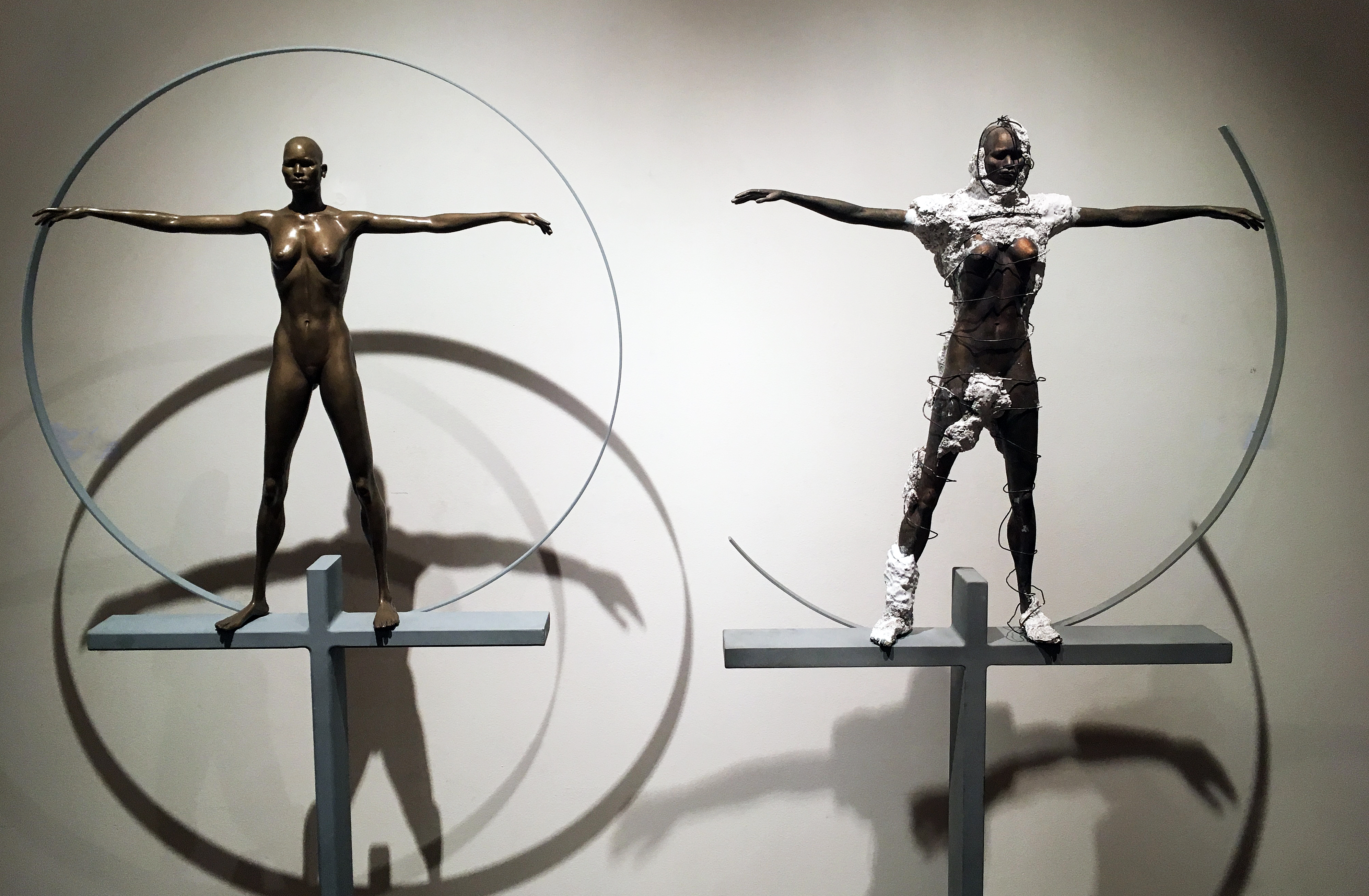 The sculpture with two figures reminds us of DaVinci’s Vitruvian Man. Two bronze female figures are encompassed by a circle One figure is full, polished and complete, and is set against a second figure containing remains of plaster and wire as if to the say the perfect and the flawed co-exists in our lives. It is a metaphorical conversation between the material and the moral. 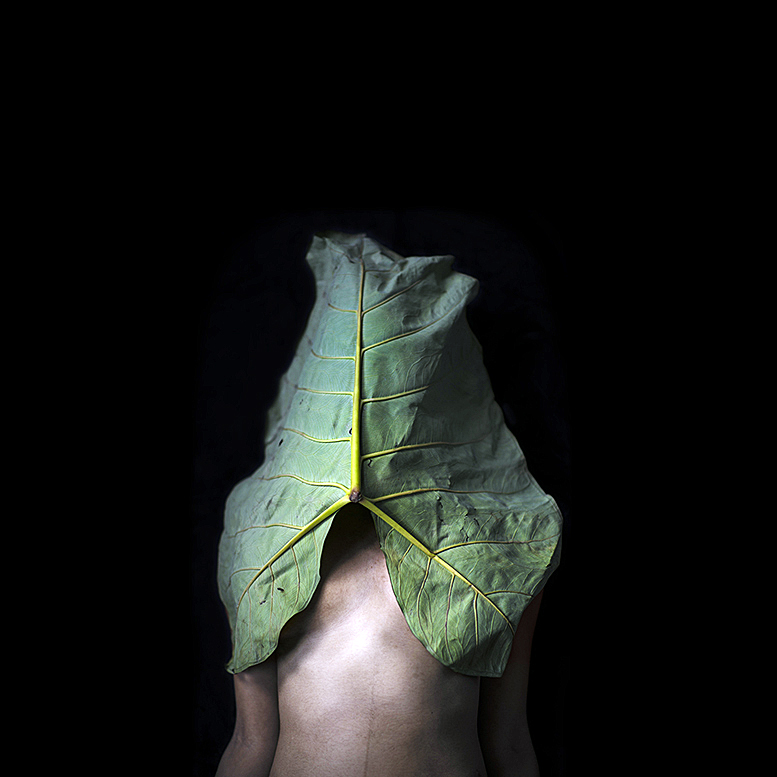 The contrast of Stephon Senegal’s work could not be more obvious in his collection of large, dark color photographs, most containing two images next to each other. The exception is this image of a large leaf over a dark-skinned figure. Senegal attended Maryland Institute of Art, and has gallery representation by Washington D.C.’s Morton Fine Art, Senegal deconstructs the human form, creating an image that is visceral yet tangible. The viewer is perplexed by the mysterious leaf canopy that covers the head. 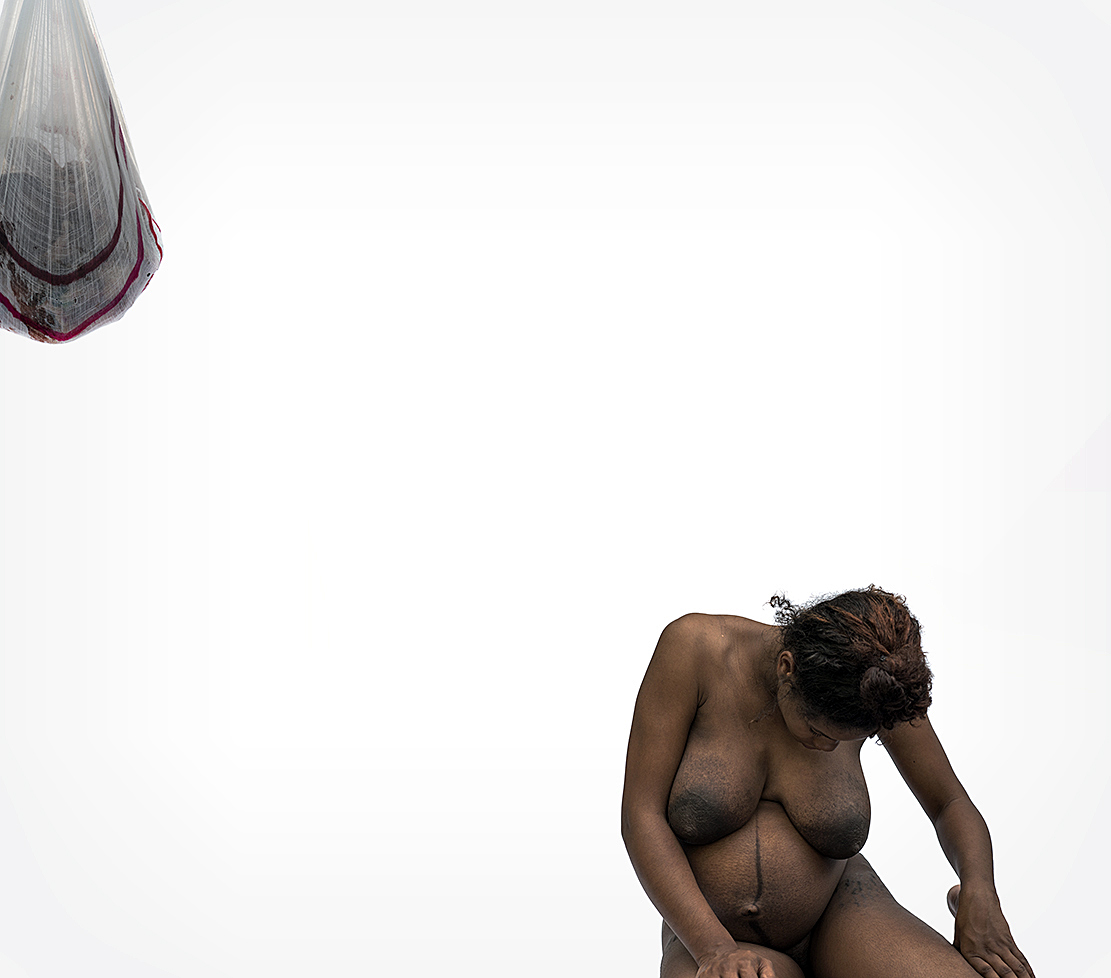 In severe contrast is this large photograph of a nude, pregnant black woman against a hanging bag of paper, all on a stark white background. The imagery is beautifully strong and moving, as is the way Senegal creates the open and abstract space in between. He moves effortlessly between these two distinct images with weight, thought and expression.

He says “My work is an exploration into the depths of maturation, chronicling the deconstruction and reconstruction of the human psyche and form. I build histories around obsessive notions and violent motivations while studying how those subsequent interactions convert into ritual and vice.” Senegal attended Maryland Institute of Art and has gallery representation by Washington D.C. at Morton Fine Art,

In these exhibitions George N’Namdi stays true to his mission, and although he has always exhibited artists of all racial backgrounds, his focus here is on the extraordinary talent of two African American artists.