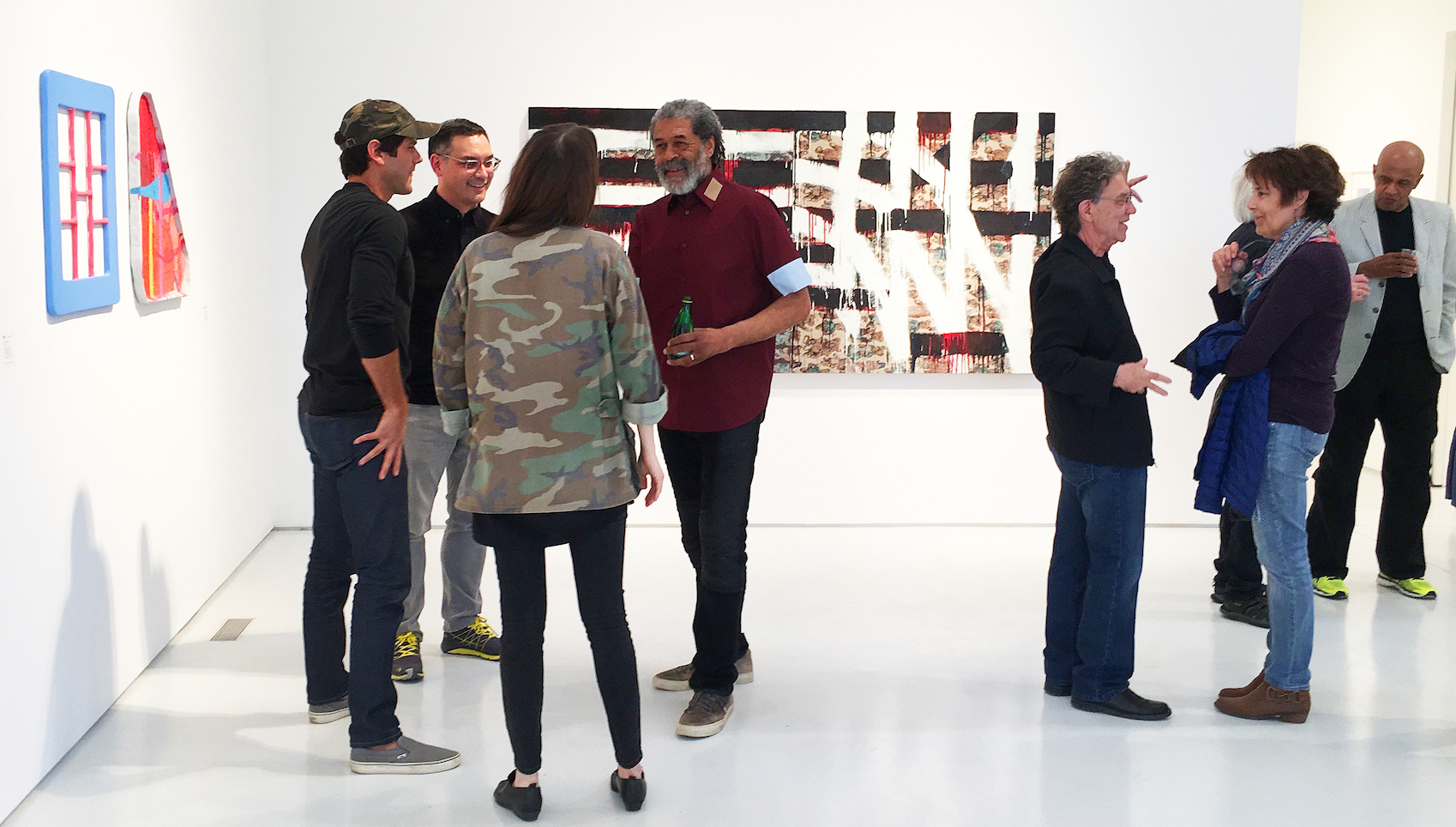 Although Binion and I were at Wayne State University in the early 70s, I was not very familiar with his work until I saw his exhibition last July representing the United States at the 2017 Venice Biennale. It was a powerful exhibition, and like many successful artists that fit the modernist profile, Binion makes work that is a study in oppositions: line and shape, figure and ground, image and abstraction, copy and original, color and black & white. His modus operandi is to somehow magically blend an assault of binaries into a single, unified emblem of the unique and complicated self. Although the laconic grids resonate with this viewer, I walked out of the exhibit thinking about the influence of the cross-hatch marks by Jasper Johns.

After earning his BFA from Wayne State University, Binion went on to complete his MFA at Cranbrook Academy of Art and became a professor of art at Columbia College since 1992. He describes his minimalistic abstract paintings as “Rural Modernist.”  Is he referring to being born on a cotton farm in Macon, Mississippi where he was exposed to the West African textile designs in his mother’s quilts? Possibly. 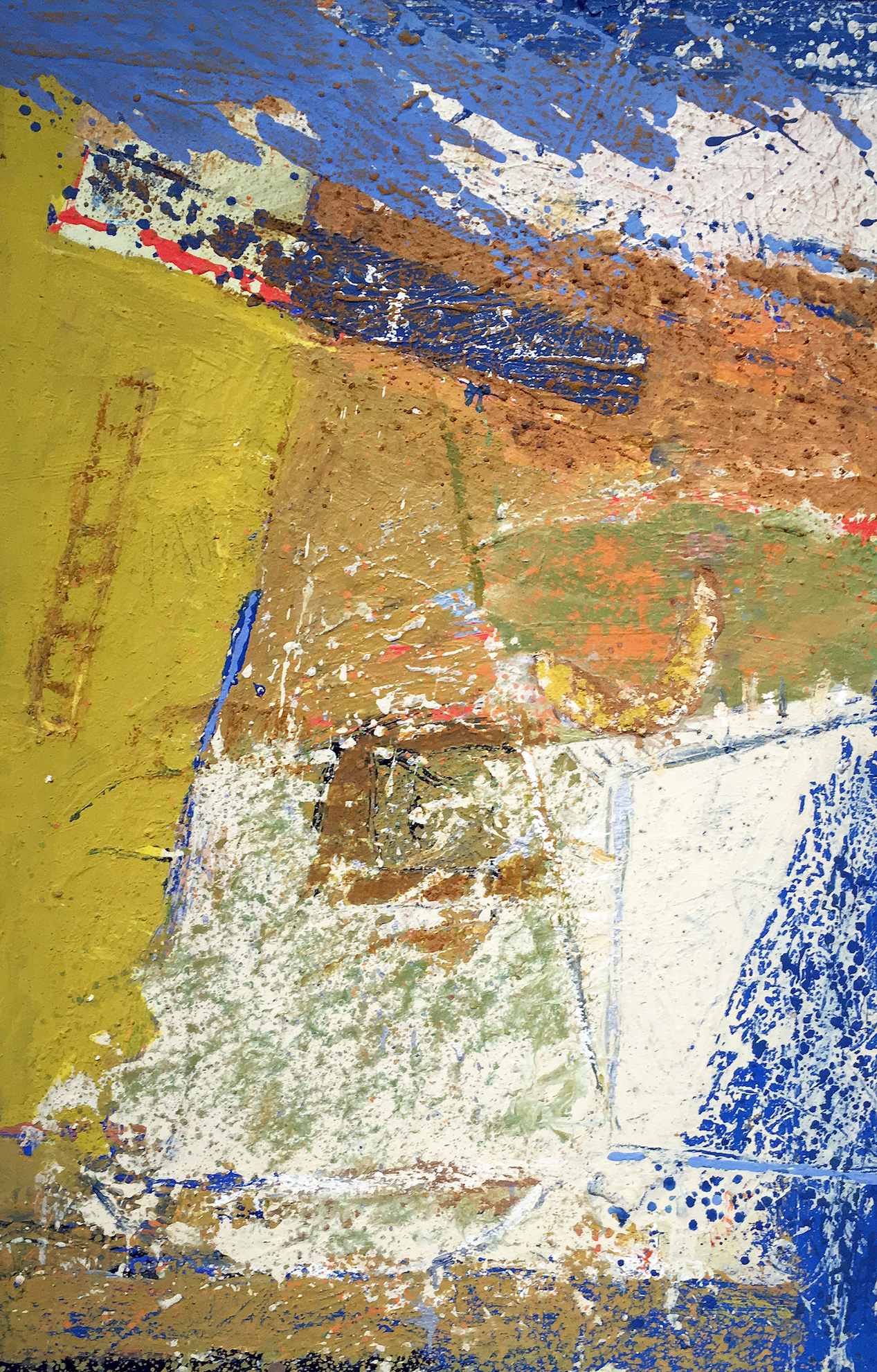 I have written before in the Detroit Art Review about the veteran Detroit artist, Allie McGhee, when he exhibited at Detroit’s  N’Namdi Contemporary Art in April of 2016, where he had a large solo exhibition, Now & Then, alongside work by Carol Harris, also in this Hill exhibition.  McGhee’s exhibition was majestic in the way he elevated shape, form and color with mixed media on paper and the works on canvas.  In my previous review,  I described McGhee as, “A Detroiter who attended Cass Technical High School and completed his undergraduate work at Eastern Michigan University in 1965, but he was born in Charleston, West Virginia.” McGhee describes his influences like so: “As an artist I have always been inspired by the diverse rhythms of our environment,” he says. “It has been a great reserve of energy for my work. In my recent works instead of seeing the natural world as a rational observer, I see if from within as if through a telescope or microscope.”

Throughout the evening, I kept returning to his mixed media work, Step’n Off  because it just kept growing on me.  The composition leads the way on this vertical abstract expressionistic painting with a strong unconventional structure created by the use of space, shape and color.  The under-painting, with accents of primary color, provides a kind of intuitive support for the overall painting. The only reference to something vaguely representational is a small ladder, an icon that suggests a climb and the thin solid rectangle that repeats itself. McGhee says he favors using sticks to apply paint rather than brushes. Rejecting the brush, he pulls and scrapes the paint across his material, whether it is canvas or paper. The action of the stick allows McGhee’s hands to interact with the paint and the surface in a visceral way, where the thin paint spatters as he arranges this lathe-like construction. Viewers might subconsciously ask themselves, Would I like to have this painting in my living space?  My answer is, overwhelmingly, absolutely 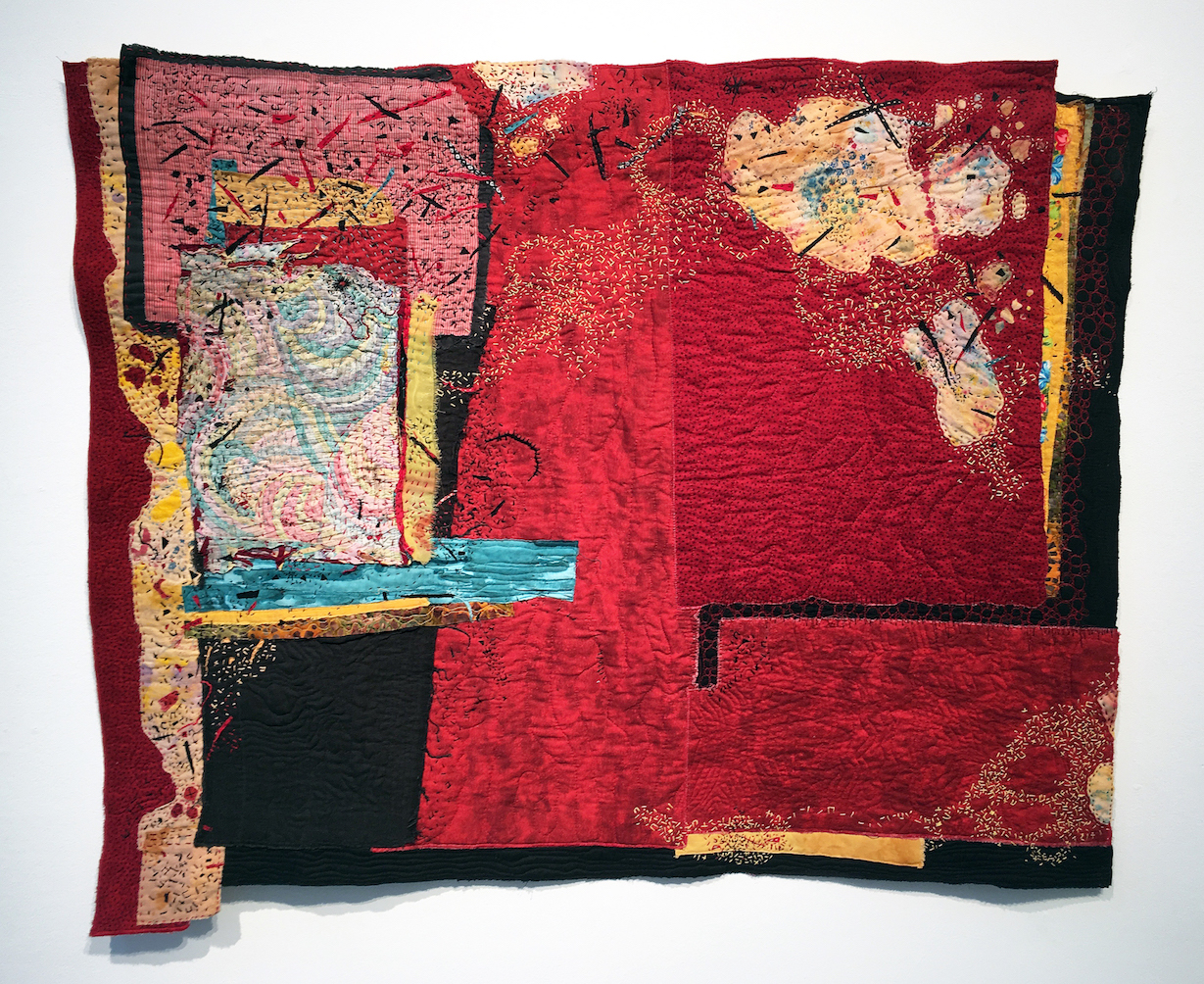 The first thing that jumps out from the work of Carole Harris is her choice of medium.   When I wrote about her work in April, 2016, I described it like this: “For visual artists who quilt, Harris’s work transcends the traditional expectations we think of when mentioning quilting. In a web-based reproduction, we see an abstract painting, dynamic in the use of color, line, shape and form. It’s only on closer observation that one realizes these are compositions executed using embroidery, stitchery and multiple patterns of cotton, silks and hand-dyed fabric.”  In this viewer’s experience, especially in the Detroit area, this artist leads the way in creating abstraction using a large variety of cloth materials and stitchery.

Harris says , “My work relies on improvisation. I am fascinated by the rhythms and energy created when I cut and piece multiple patterns. I let the fabric and color lead me on a rhythmic journey. My intention is to celebrate the beauty in the frayed, the decaying and the repaired. I want to capture the patina of color softened by time, as well as feature the nicks, scratches, scars and other marks left by nature or humans.”

Glen Mannisto wrote for the Detroit Art Review about Carole Harris’s solo exhibition at UofM NCRC Rotunda Gallery,  “As a child growing up in Detroit, Harris was taught embroidery and stitching by her mother, and, being “height challenged” and quite petite, she learned to make her own clothes so they would fit properly. In high school at Cass Tech she studied music and science before settling on art, and, after graduating from college in 1966, she began an interior design practice that she maintained until recently.”

Addie Langford, Mint/Red/Oso, Acrylic and Domestic Textile on Board, 2018

Langford’s large, abstract expressionistic painting, Mint / Red / Osois is acrylic paint over domestic textile on board. The stroke work reminds this viewer of a cross between Sean Scully and Franz Kline with textiles as a backdrop. The diptych is powerful in its structure, execution and attraction to the vertical flow of dripping paint.  Langford earned her BFA in architecture at the Rhode Island School of Design and her MFA from Cranbrook Academy of Art. I became familiar with Langford’s work when she exhibited a solo show at the Simon DeSousa gallery with these semi-transparent white bars and controlled vertical drips of paint. One wonders what four years of architecture study does to an artist who wants to make things with her hands in a rigorous process of trial and error. On her web site she mentions McArthur Binion as an influence, and this writer notices some of her earlier work came from N’Namdi Contemporary Gallery in Miami. 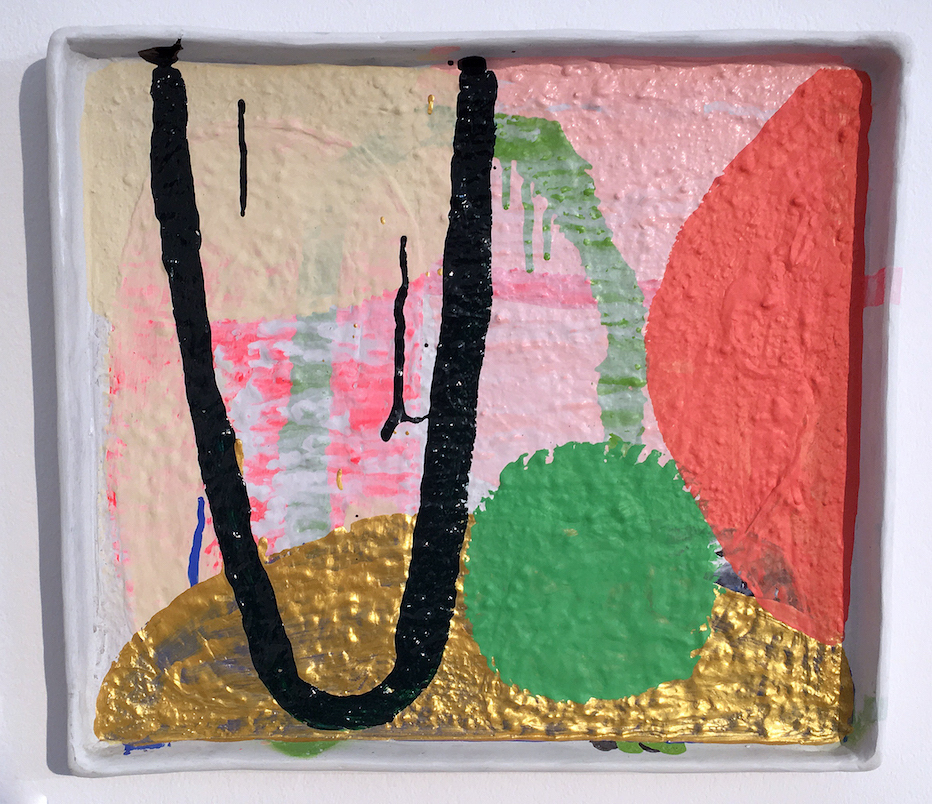 Part of the Binion show is another artist earning his MFA from Cranbrook Academy of Art, James Benjamin Franklin.  Currently living and working in Detroit, Franklin was recently in a group show at the Galerie Camille in midtown Detroit, and a solo show at Reyes Projects in downtown Birmingham.  His small work, Untitled is acrylic, epoxy and aluminum, sealed in a rigid wrap on foam and typical of his recent work. These works feel like naïve abstraction relying heavily on primary color and simple shapes.  Occasionally he inserts a grid or web into his form. This younger artist’s work feels early in its development. 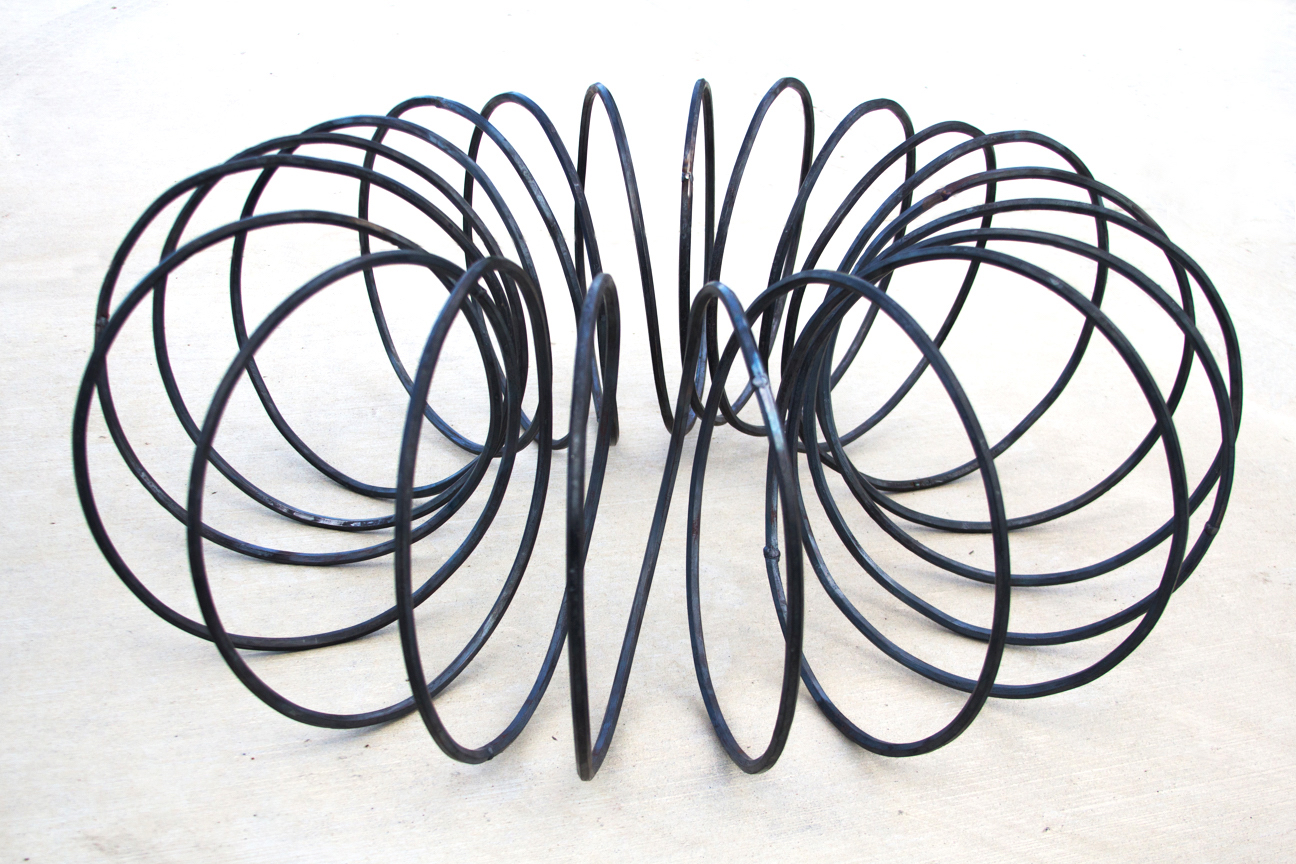 Again, Binion turns to his alma mater Cranbrook Academy of Art with work by Tiff Massey, who earned her Bachelor of Science from Eastern Michigan University, and a Master of Fine Arts in Metalsmithing at Cranbrook Academy of Arts. This early educational path in the sciences differs from other artists but seems to have migrated to metals and on from that point to various art forms.

The floor sculpture, Spring Prototype 1 is coiled steel rod, maybe half inch in diameter and reminds this viewer of playing with a slinky as a child. Most importantly this work moves beyond plain and simple as its graceful and cultivated design leaves the viewer wanting to see more.

Massey says, “My experience with jewelry became my gateway to other media, to a larger perspective, and to making large-scale sculpture, always with a consistent emphasis on adornment. What happens when the viewer becomes adorned and how does the environment facilitate that transition from the unadorned to the adorned? How does the context and placement of an object influence an individual’s perception of self? The work first seduces the viewer, creating a desire to take, touch, and activate.  Once activated the pieces immediately create a sense of confidence in the wearer, producing an increased desire to show off and be seen.  Whether it is a sculpture on a wall, an object set in an outdoor landscape, or jewelry worn by the viewer, my work maintains an engagement of the body itself.”

The Hill Gallery opened its doors in Birmingham, Michigan in 1980 and has offered contemporary art representing sixty artists, both nationally and internationally recognized, along with an exceptional American Folk Art collection.