The Oakland University Art Gallery (OUAG) has opened an exhibition, Who Were They Then, on October 20, 2018, that puts together visual artists with ties in and around Detroit. Five artists working in different media create a biographical sketch of their work spanning back to what they might consider as early beginnings. 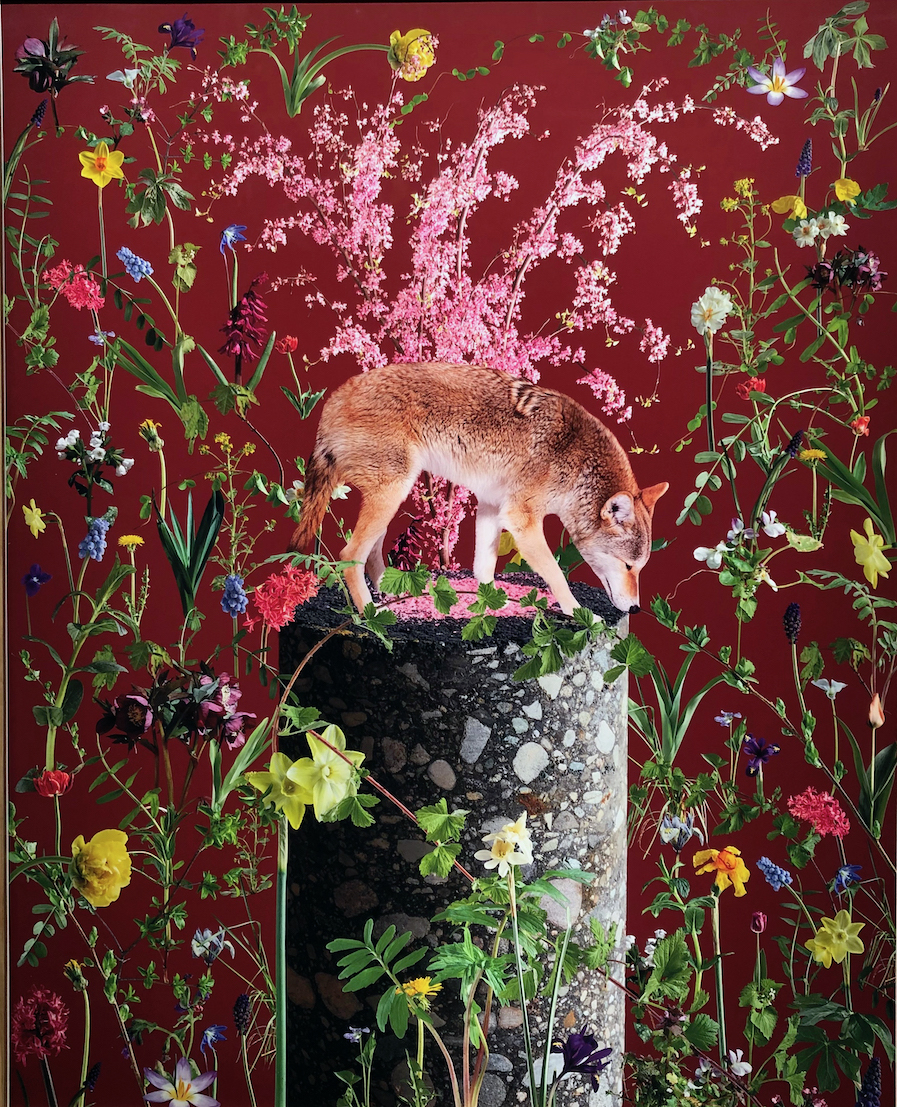 Morgan Barrie photo collages are landscapes that usually include an animal, as in the example Pest 1, a 40 x 50-inch digital archive print, in which the artist places an animal on a pedestal and surrounds the subject with flowering plants native to the Midwest.  The formal arrangement and centered fox, with a solid background and this array of plants carefully placed, would seem to be an application in composition, shape, and color. Needless to say, all of these elements are brought into a digital environment, carefully placed, where the light varies slightly.  There are five of these vertical compositions, each with an animal at the center: a dog, a fawn and a cat.    Her work in Re: Formation, at 600 Jefferson Avenue, Toledo, Ohio where she places a female figure in the landscape with floating Plasticene bags in Future Seasons, suggests an interest in environmental issues. In fact, she has created a body of work dominated by these bags set against clean water and open sky as subjects.

She says in her statement, “I view landscapes as teeming with millions of constantly changing factors…I like to have sections of the frame that are overwhelming to capture that idea.  All my work is a way to have a dialogue with my fear and confusion as I try to understand the way we as humans relate to the rest of the natural world, or rather don’t relate to it.”

Morgan Barrie earned her Bachelor of Arts in photography from Columbia College Chicago and her M.F.A in Photography from Eastern Michigan University. 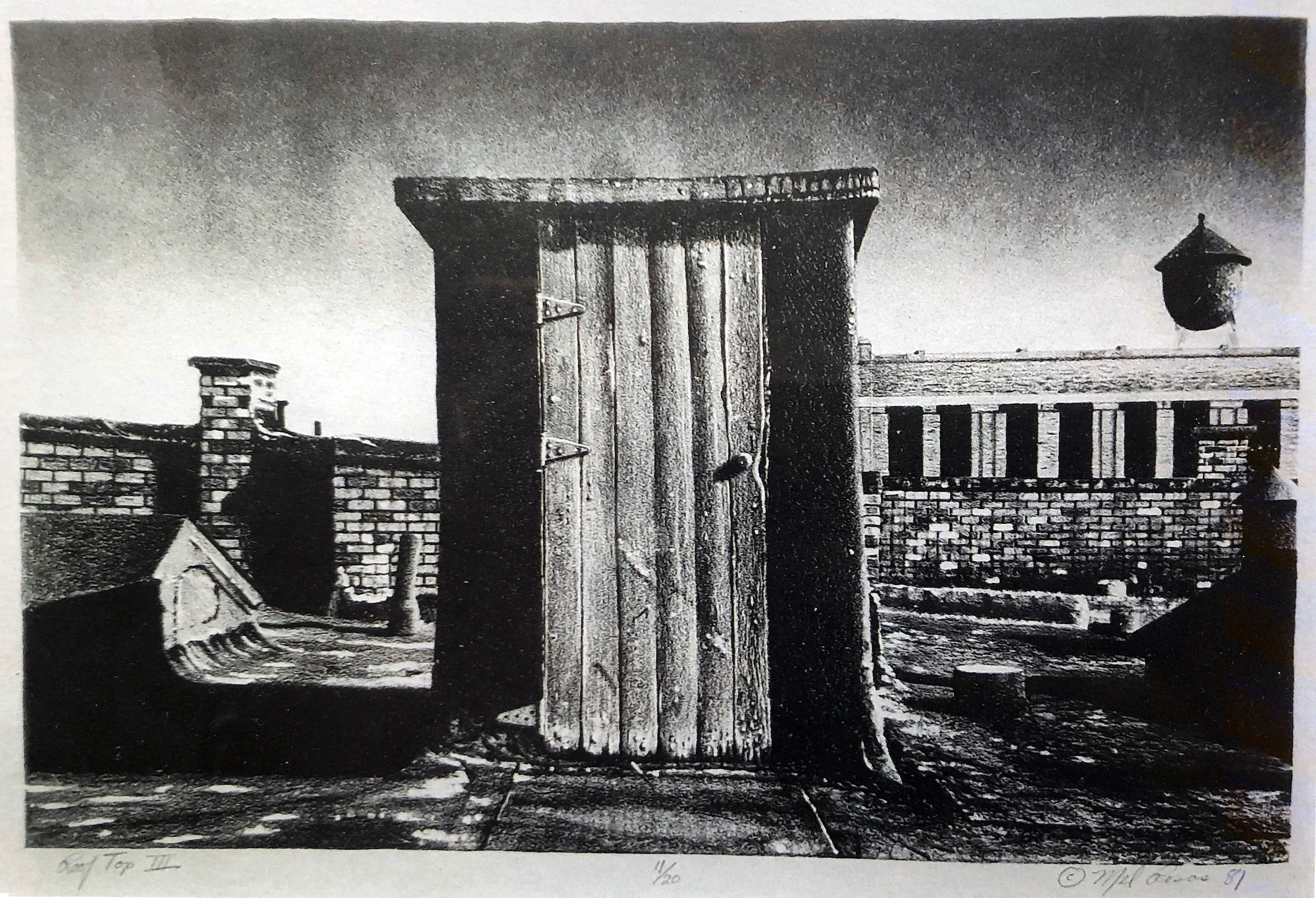 Mel Rosas, Professor of Painting and Drawing at Wayne State University takes us way back to his lithograph Rooftop III, 1981 as a starting point for his magical realism in a landscape. There are few artists from Detroit who have had a long and successful career being represented in New York City by a major gallery.  For Mel Rosas, it was 1991 when he began his relationship with Davison Contemporary then located on 724 Fifth Avenue, and in 2014 moved to Chelsea on West 26th street.

These images over the years have shared common components.  The apparent elements are his use of a flat picture plane facing the viewer, and always an opening to space beyond, whether it’s the ocean, a sky, a room or just around a corner.  The settings are Latin American culture and ethnic identity, an influence that may come from his father’s homeland of Panama. The symbolism included on his street walls is often of graffiti, old movie posters, religious iconography, traffic signs and automobiles from the 1950s. Occasionally the figure of a man in a white suit appears in his work, as in Searching for the Romantic, where he places himself in the painting. In visual art, as in literature, it’s hard to get beyond oneself. 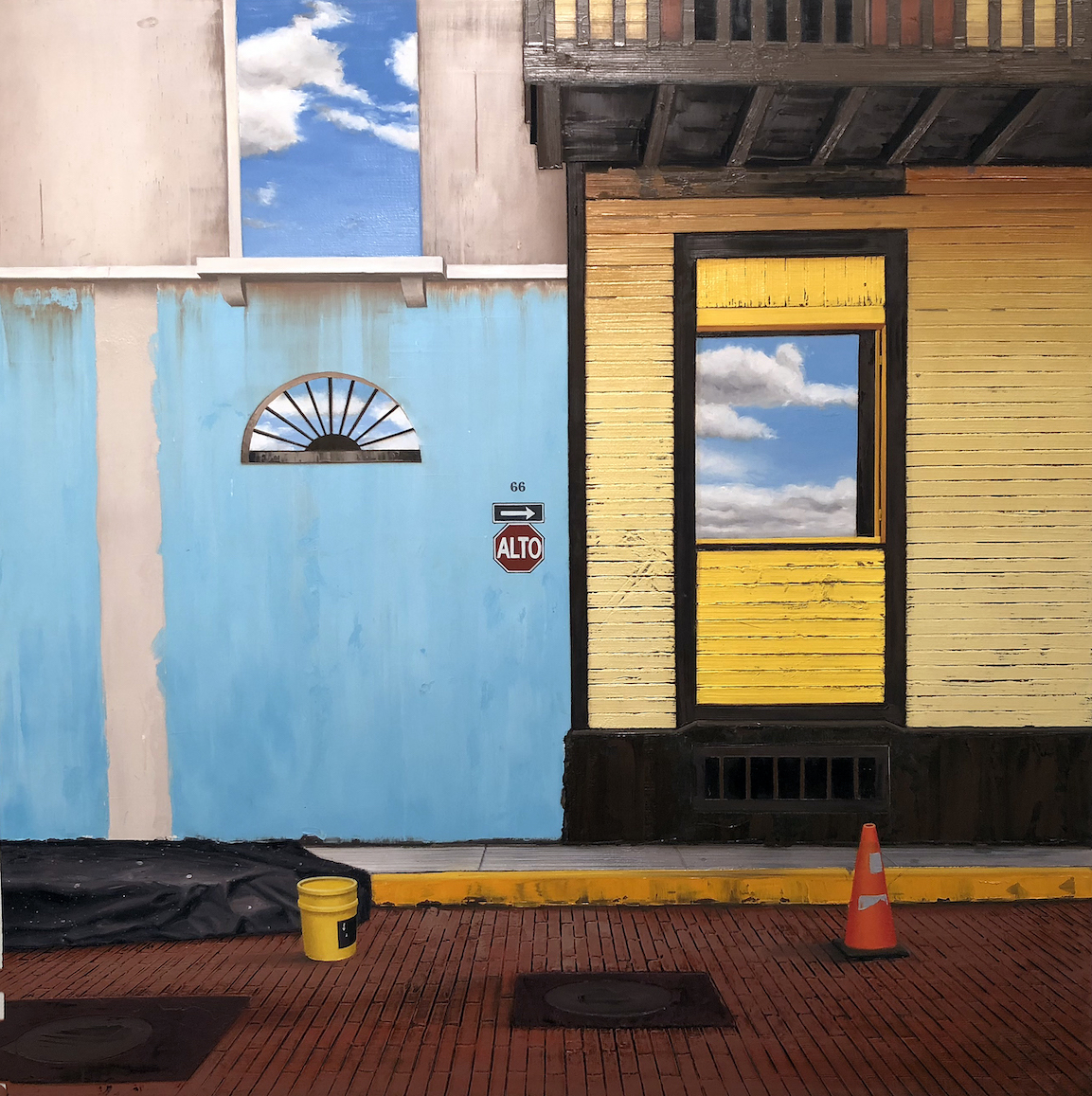 In Gentrification, Mel Rosas gives us the iconography of a Latin urban landscape with suggestions of construction and rebirth. Traditionally, he places his focus on composition, color and space with extraordinary detail to texture in this one-perspective rendition of a street scene.  Most who are friends of the artist know he has always added two numerals indicating his age at the time he executed the work.

He says in a statement, “I have developed an interest in Latin American Literature, both realism (Bolano) and magic realism (Borges, Marquez). I am fortunate to have traveled through several Latin American countries; my research is an ongoing investigation addressing questions of place, culture, and ethnic identity.”

Mel Rosas earned his Master of Fine Arts from Tyler School of Art, Temple University, and he has been a recipient of grants from the National Endowment for the Arts, Elizabeth Foundation for the Arts Grant, Charles H. Gershenson Distinguished Faculty Award, and a Pollock-Krasner Foundation Grant, New York, NY, 2009. 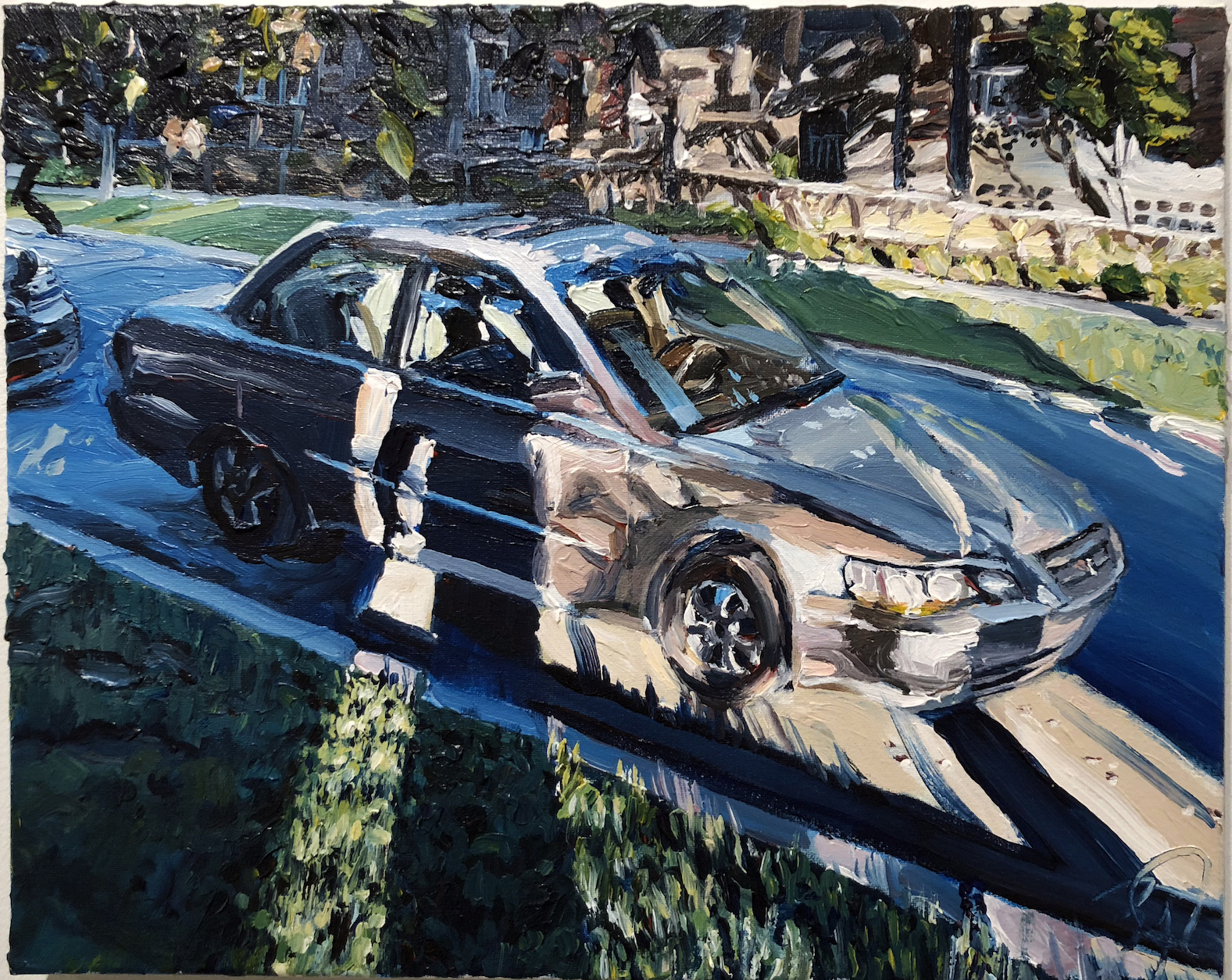 Bryant Tillman is a Detroit artist who has been painting Detroit expressionistic landscapes for over thirty-five years.  In this exhibition, he presents ten works of art, fluid representational compositions of cars, people and buildings.  These high-contrast acrylic works are probably executed in a short time, from start to finish before the acrylic dries. In his painting, Honda Accord, he paints in his shadow as he takes his image during low light.  Back in the studio, the “moment in time” gets rendered with a loose, painterly brush stroke with surfaces that grab the viewer’s attention.

He says in his statement, “Painting like a dead Frenchman, you tend to often think like one when selecting subject matter, locale, or method. Natural scenes and surroundings, like freshly manicured lawns and gardens or wildly verdant wooded areas, are not alien to Detroit.  Also, the impressionists often included subjects that are considered contemporary to that time…steamships and steam locomotives, for example. So I felt it only natural to include in my work an occasional late model car in my urban scenes.”

Selected as the Visual Arts Fellow in 2013 by Kresge Arts in Detroit, Tillman shows things as they are, and lets the viewer bring their experience to the work. With his use of long, low shadows of light and color, the viewer sees a more vibrant, fertile reality than what actually exists.  He puts a painterly face on the landscapes of Detroit. 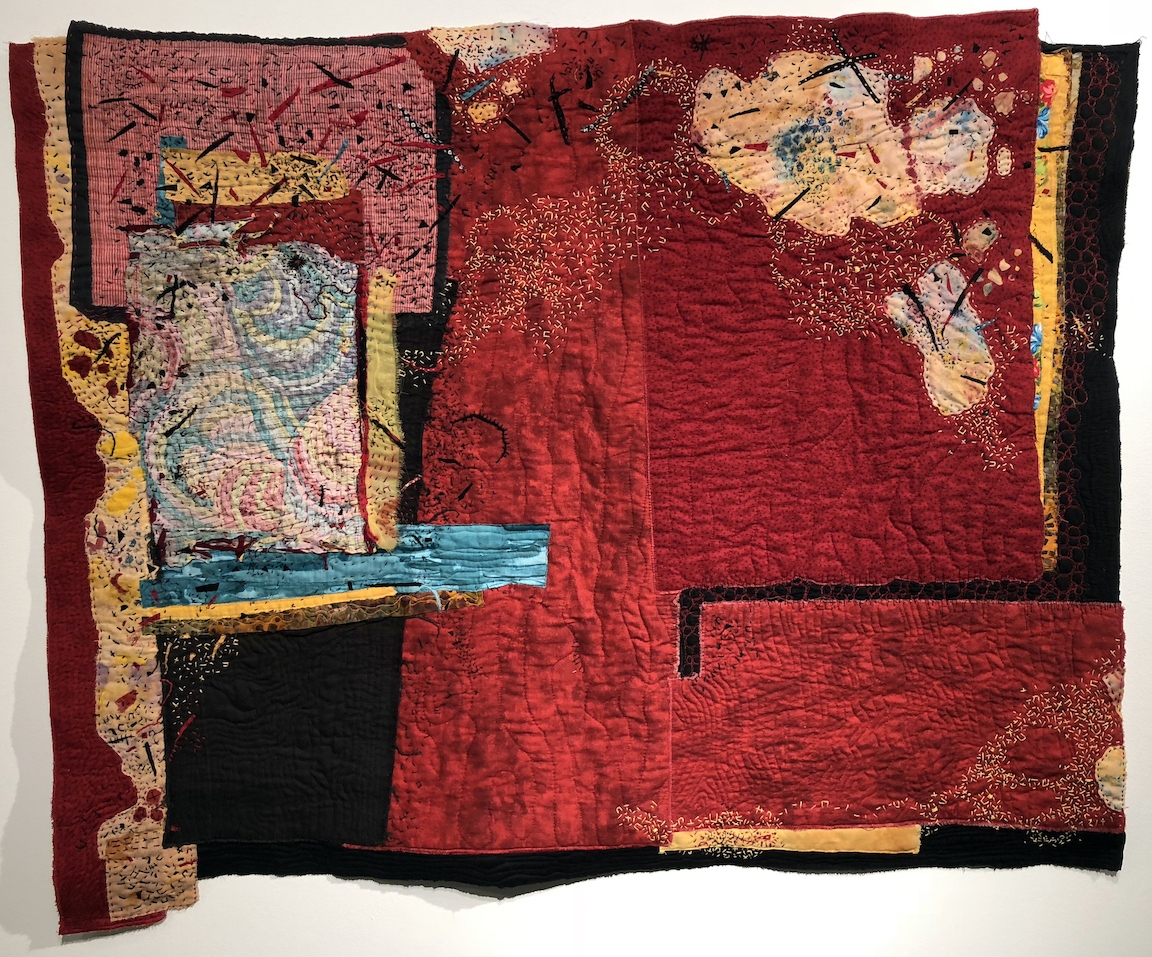 For this writer, what is interesting about the biographical sketch of Carole Harris is the earlier work, as in View from the Kitchen on Preston Street, from quilt/ fiber artist to abstractionist, as in Time and Again, 2018.  Having written about Harris’s work when exhibited at the N’Namdi Center for Contemporary Art and recently in her exhibition, Repetition, Rhythm, and Vocab, with Allie McGee, at the Detroit Institute of Arts, you see a unique path to non-representational art. Here in the OUAG exhibition, you view the 1999 piece, cluttered with improvisational polygons, triangles, rectangles and squares to the 2018 work, Time and Again, that depends more on the subtlety of stitchery, layers upon layers of cloth and color, while establishing a more distinct composition working from a dark background to a light off-set foreground.  One can trace back to pre-Reconstruction in the South, where quilts were necessities, and female artists went unrecognized for their aesthetics, but Carole Harris had her beginnings in textile work in the mid-1960s and gradually evolved to a pure abstract narrative, with original gestures, layered textures and innovative compositional ideas.

She says in her statement, “As an art student in college, I remember seeing the work of Romare Bearden as one of the first artists I can remember who depicted African American imagery, which made an impact even though, and probably because, it was abstract.”

Carole Harris earned her Bachelor of Fine Arts degree from Wayne State University and was the recipient of the 2015 Kresge Visual Art Fellowship.

A familiar artist in Detroit, Clinton Snider’se work in this OUAG exhibition stands by itself in a separate corner space. His expressive post-industrial landscapes vary in both size and shape, occasionally including a figure.  In this sizeable rectangular work, Last Winter, Snider creates an eerie light that sets a mood as a low sunset casting long shadows across the snow.  It almost feels apocalyptic.  Trimmed and truncated trees surrounded by old debris speaks to a time gone by in a once thriving era, perhaps Detroit, waiting to be repurposed. The architecture in Snider’s buildings are almost always pre-world war II, reflective of an older neighborhood, and sometimes nostalgic, as in Back Forty, where the extra wide angle image plays heavily into the composition with extended shadows from objects spread out across a lush lawn.

Not many visual artists collaborate, and one collaboration that includes Clinton Snider is with fellow artist Scott Hocking. Most notably, their installation, Relics, consists of some 400 identical square boxes of Detroit’s discarded found objects and rummage, that were connected and set up as a grid in the exhibition Artists Take on Detroit at the Detroit Institute of Arts in 2001.

Snider says in a statement, “I think that simply growing up in and around a city with a post-industrial status like Detroit has had the greatest effect on my work over the years. It feels like walking through the texture and material substance of history. Still, within this crumbling of infrastructure and architecture, a spirit remained intact that manifests itself in creativity, innovation, and a tenacity of people, that changes one’s perspective on how society functions. “

Clinton Snider earned a Bachelor of Fine Arts from the College for Creative Studies and was represented by Susanne Hilberry gallery.

Who Were They Then was curated by Dick Goody, Professor of Art, Chair of Department of Art & Art History and Director of Oakland University Art Gallery. In recent years he has reached out to curate many new types of exhibitions that would include installations, conceptual work and leading types of experimentation by artists from all parts of the country and beyond. Here, Goody comes back to an exhibition of Detroit artists, largely made up of representational work (with the exception of Carole Harris) that survey the artists’ work over time, and in some way feels like he comes full circle.

Who Were They Then at Oakland University Art Gallery runs through November 18, 2018.