To enter “Unfurled: Supports/Surfaces 1966-1976” is to discover a wellspring brimming with treasures and pleasures for all seasons. Filling the four walls of a cavernous, big box space, objects large and small, modest and theatrical, plain and comely, are prosaically lined up in tight formation around the perimeter of the space. In the center, jaunty banners, dyed fishing nets (one multicolored, another shaped like a portal), scrims of patterned fabric, and lengths of rope (one red, one blue) hang and dangle from the rafters.

Nothing feels heavy or portentous; rather, an osmotic “lightness of being” builds as the eye and spirit bounce and rocket from object to object: a tall, naked stretcher listing against one wall, irregularly shaped fabrics and bedsheets rudely tacked to walls with nails or pushpins, constricting frames and stretched canvases nowhere in sight, a wooden pole tilted into a corner, dyed dishrags suspended from a drying rack, a crisscross arrangement of stubby logs skittering across the floor, and so on…

In a word, the art on view, in one way or another sheds de rigueur formalities of content and presentation. Fusty aesthetic tropes are deconstructed and dematerialized as bespoke ideals rip and split with invigorating impact. Such radical upheavals both in art and society at large in the mid-to-late 60s occurred not only among the loose federation of French artists who dubbed their experiments “Supports/Surfaces” but also among Arte Povera practitioners in Italy, the Mono-ha cohort in Japan, and the anti-form post-minimalists in the United States.

Of all the loose congeries of rebellious unfurlers the French cadre is perhaps the least well known, although the Mono-ha rebels also fly pretty much under the radar. Hence, the value and high voltage appeal of the “Supports/Surfaces” exhibition organized by MOCAD and curated by Wallace Whitney. Refreshingly, this survey brings to the fore fourteen countercultural artists of the far-flung 60s youthquake whose fertile experiments continue to inform the dynamics of contemporary art practice. 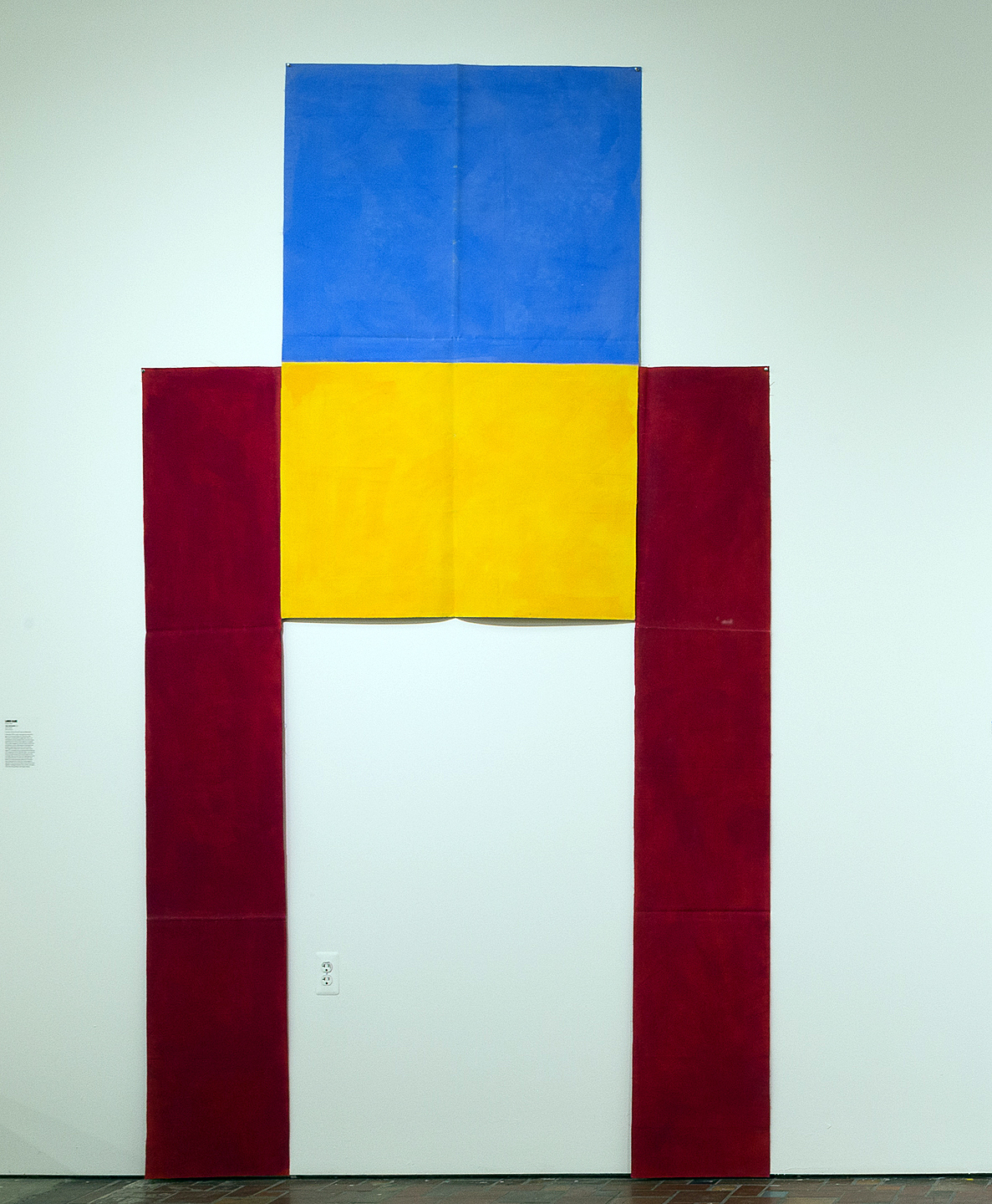 One of the prime examples exhibited in this 2019 iteration of “Supports/Surfaces” is Louis Cane’s Cut-out Canvas of 1972. Here the color blocks of primary hues resemble an upright apparatus. The blue “legs” not only flank blocks of yellow and red, but also suggest overtones of anthropomorphic hoisting and supporting. Close up, one notes that the creases visible in the canvas reveal where the unstretched yardage is folded, unfolded, and subsequently refolded into a compact parcel for storage, transport, and reinstallation. In effect, a formal Mondrian has been nimbly informalized. 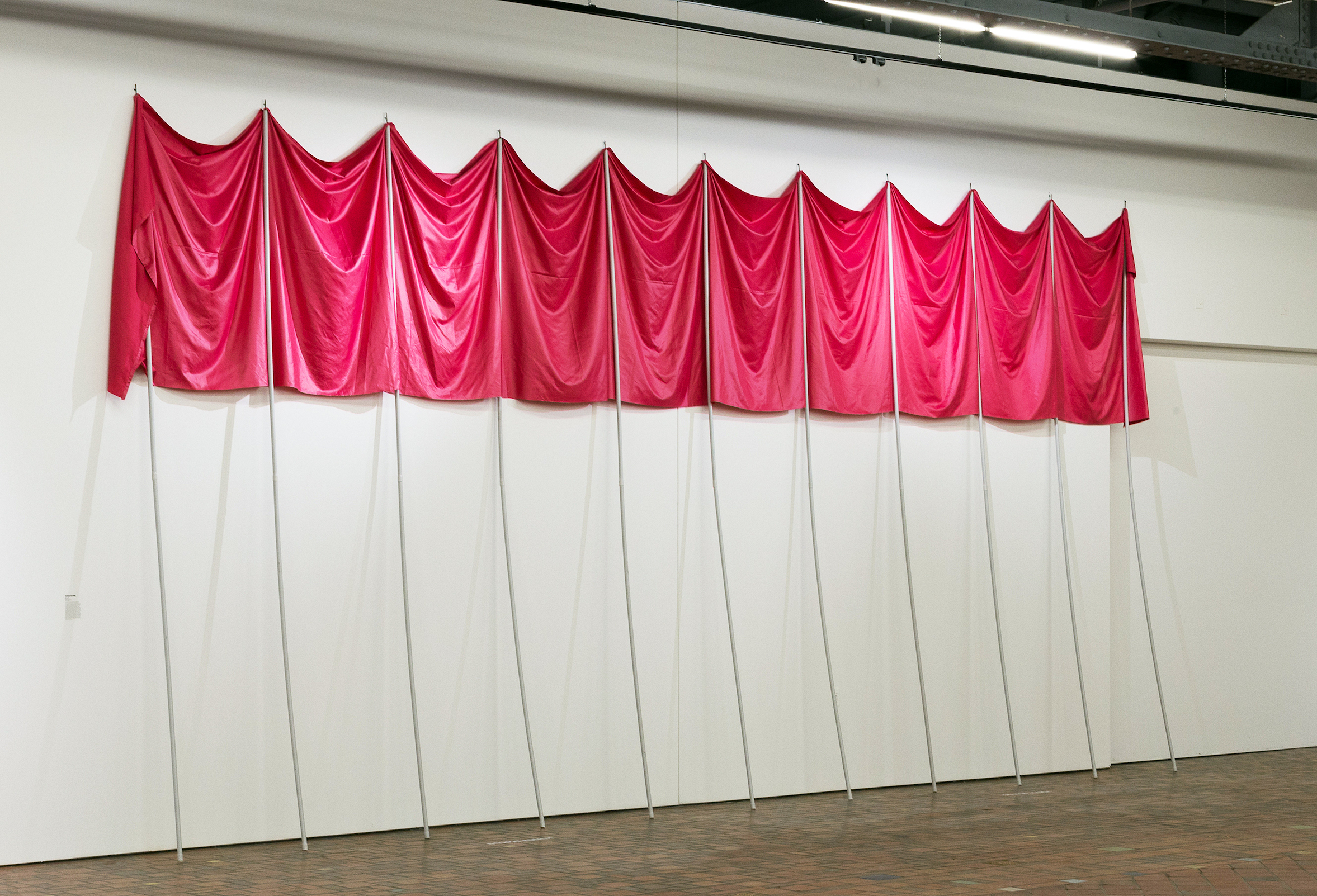 Patrick Saytour’s festive Deployed (1970), in contrast, exudes barely suppressed mobility and incipient celebration. It all but dares observers (a family, gaggle of friends, school tour group) to liberate the PVC poles, merrily dipping and swaying the brazen pink swags as they process through the museum. When not in motion Deployed, like a number of other works on display, is simply propped against the wall, and accommodatingly expands or shrinks in width depending on space available. 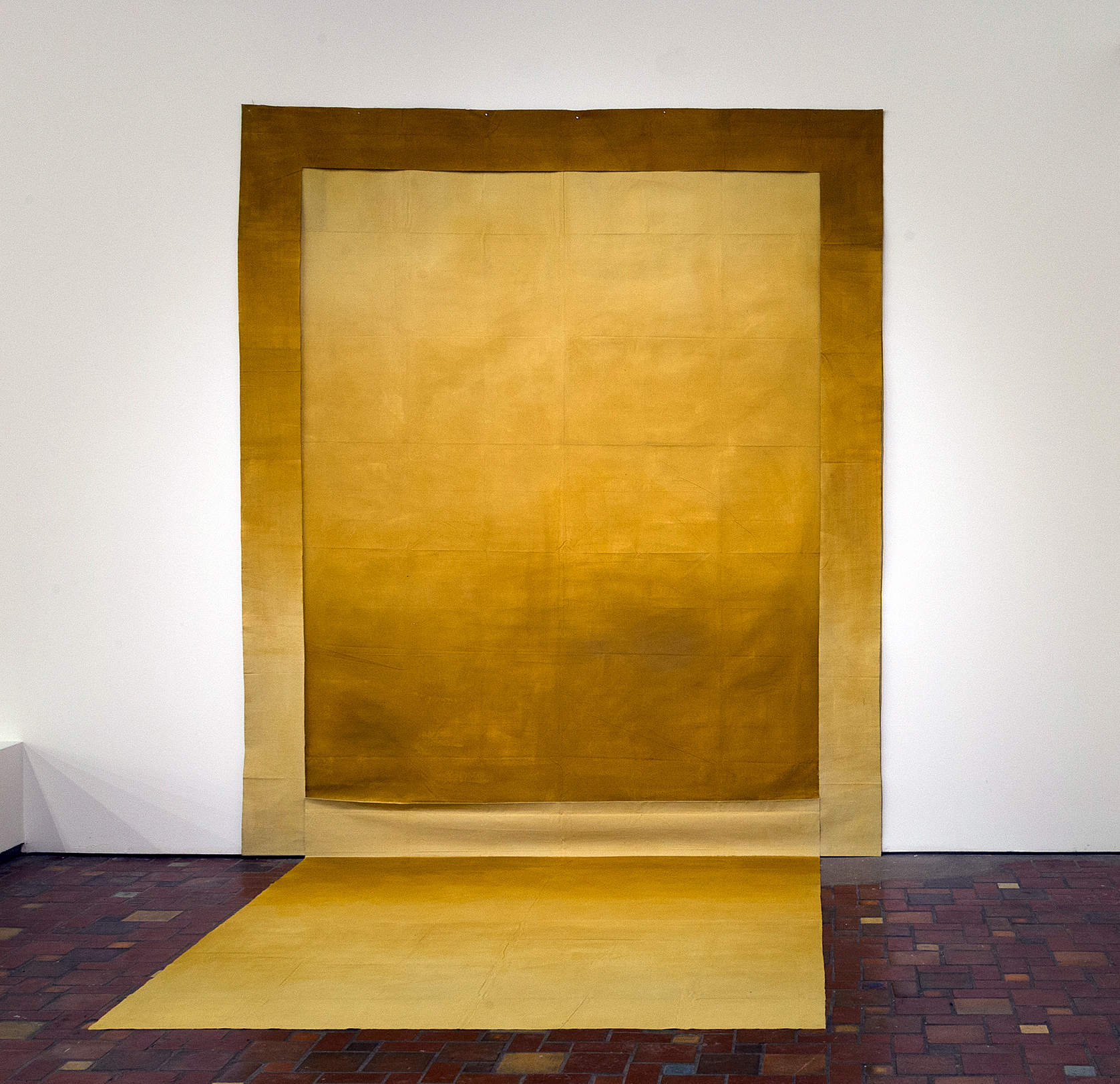 More delights, veering from transcendent to quotidian, await the spectator.  At a far remove from the entrance to the exhibition, a plush yellow installation by Cane beckons from an awkward corner.  As its title, Wall/Floor (1974) intimates, it radiates warmth from wall to floor, projecting its sun-splashed chroma across the viewer’s territory. The wall element, simply cut and left unhemmed, is almost invisibly framed by a matching length of dyed fabric, a sly play on a traditional frame. For the ultimate quotidian encounter, one discovers, in the corner opposite Cane’s luminous install, Noel Dolla’s cheeky Dyed Dishrags and Metal Drying Rack (1968). Distinction is conferred upon the humble ensemble by the realization that the process of drying kitchen rags on metal bars is not unlike hanging art on a wall. 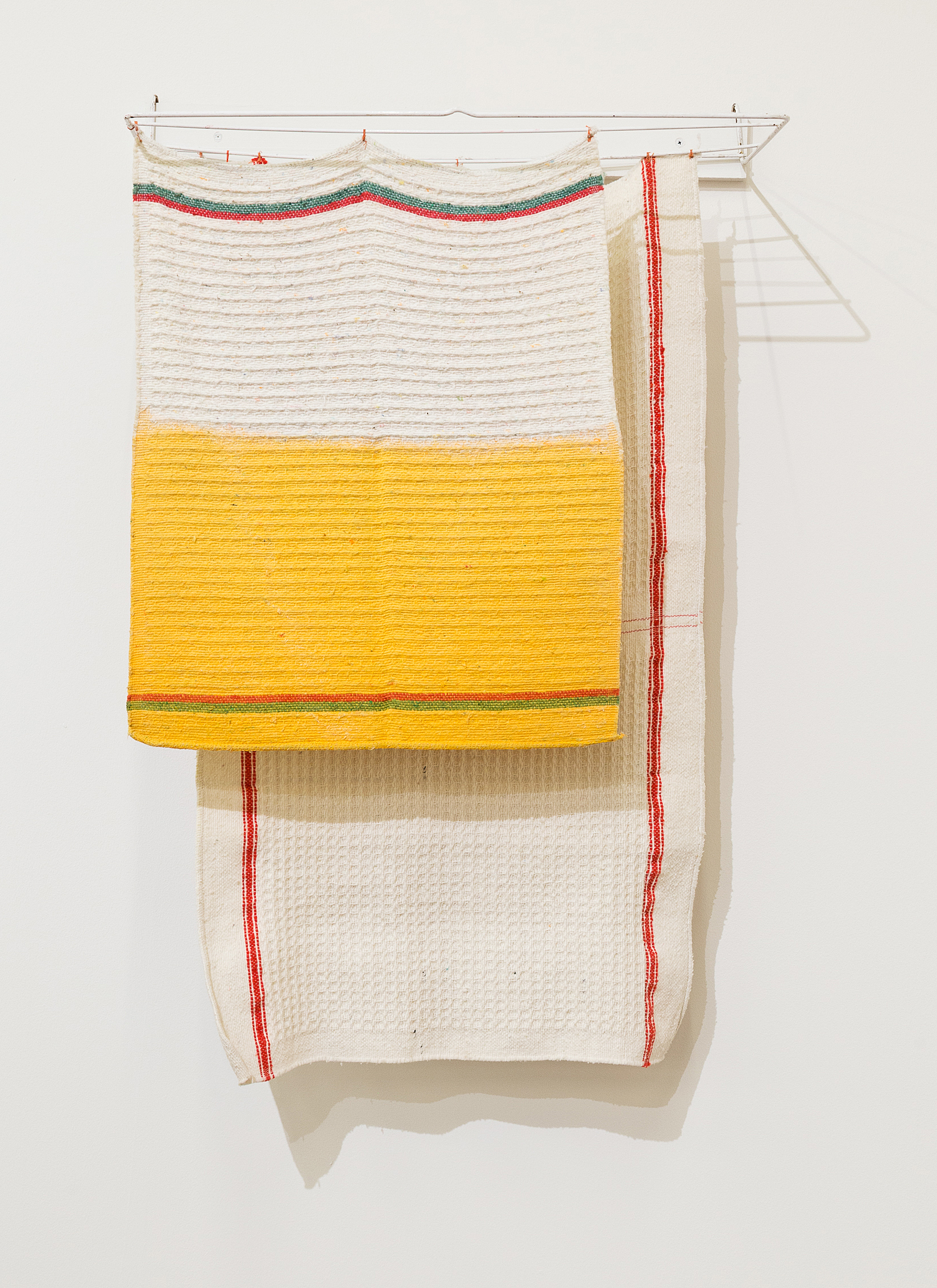 The iconic Grand Stretcher (1967) by Daniel Dezeuze, towering high above many other pieces in MOCAD’s central gallery, signals the structure/support dichotomy at the heart of the movement with terse, succinct economy. Stripped of its canvas, the bare, leaning stretcher, bereft of a painterly surface, nonetheless looms lofty and unbowed. Its stark grid, absolutely foundational to the age-old enterprise of painting, is both passe and grandiose. 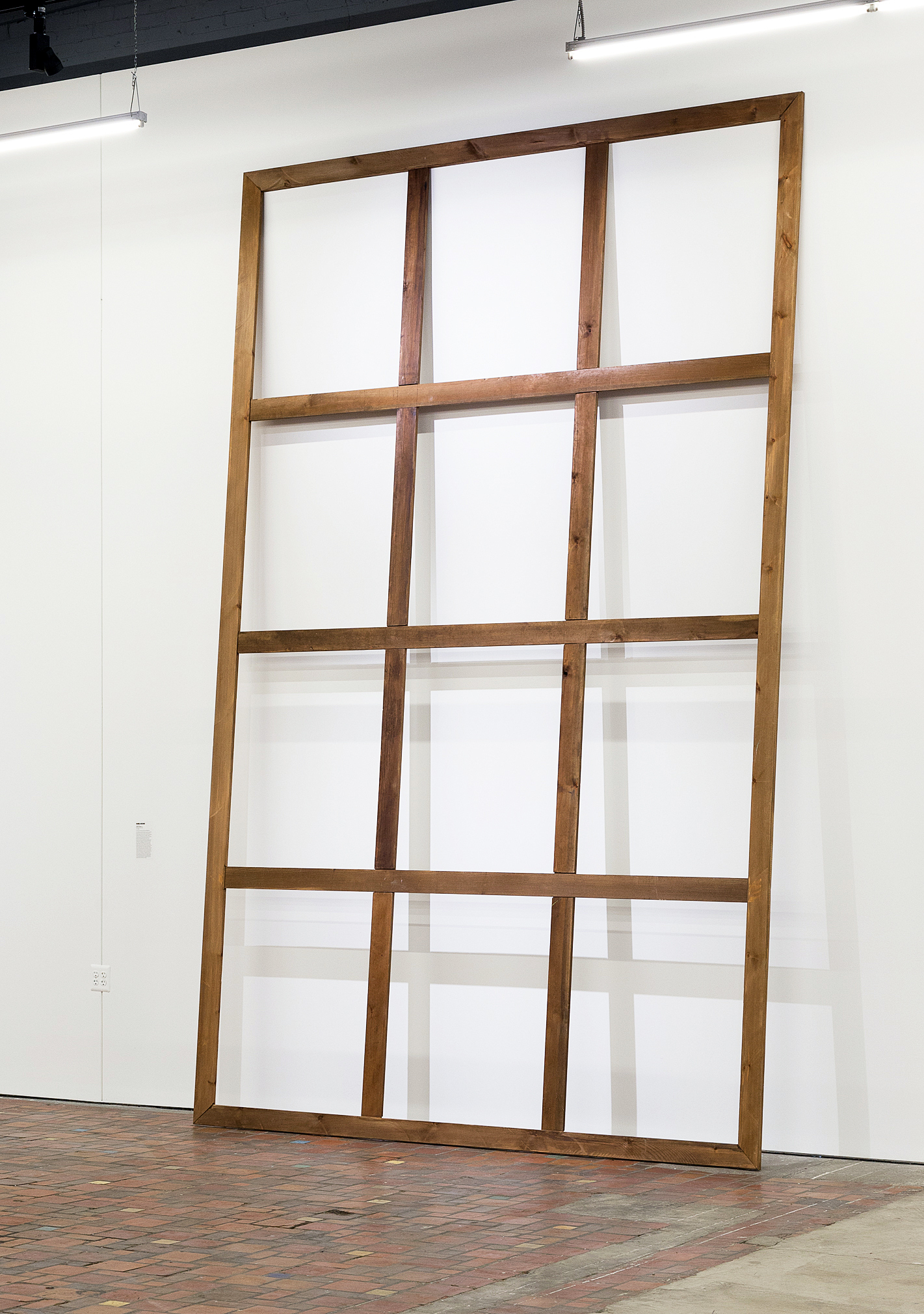 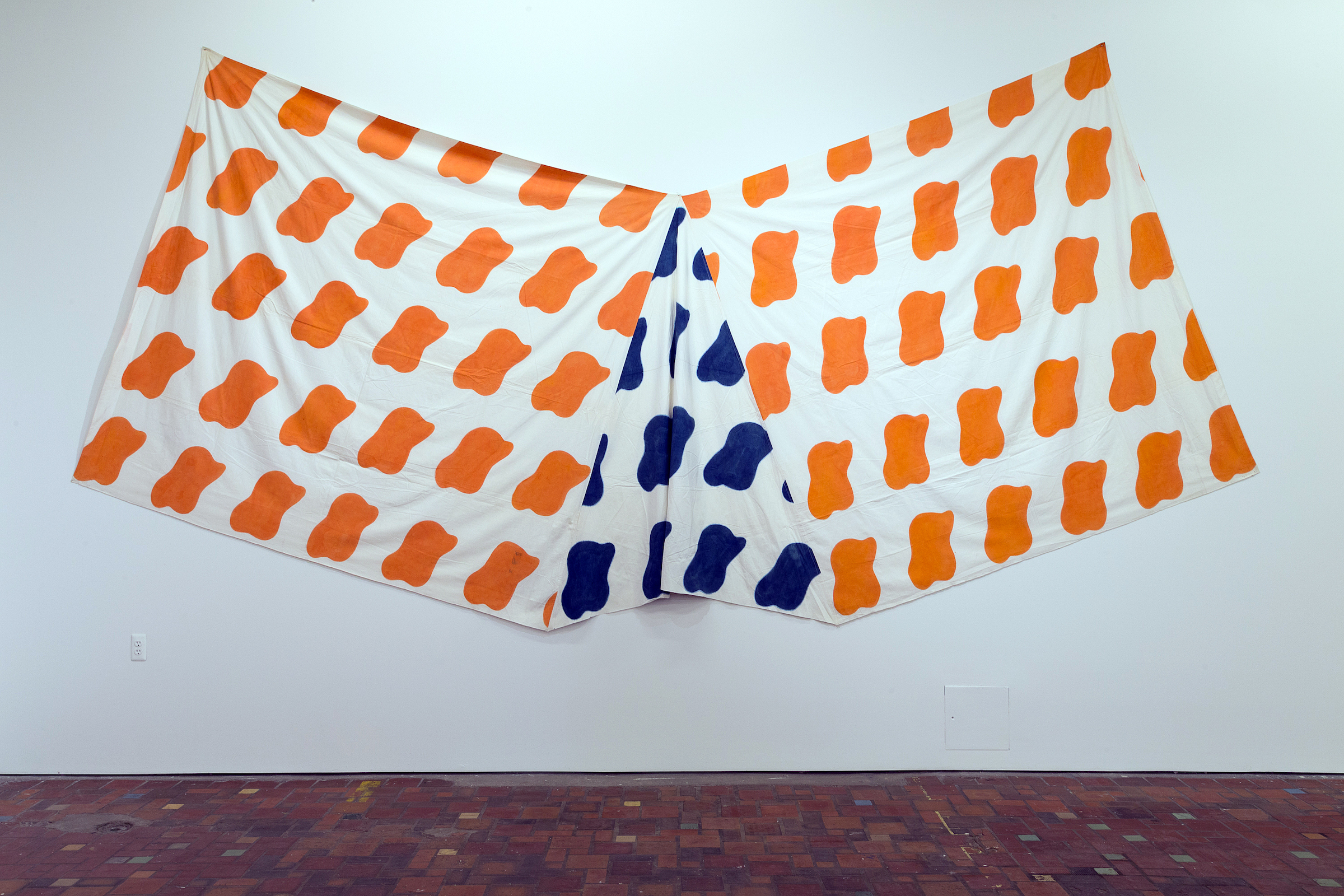 Hanging nearby is Claude Viallat’s airborne 1970/056 from 1970. Bold in shape and broad in contour, its 19 ½ ft. width resembles the unfurled wingspan of a super-entity that is perhaps talismanic: Imagination Incarnate. Unstretched and unframed, its gusset of ruffly fabric at midpoint wittily violates the sacrosanct flatness of two dimensional art.  Shorn of the familiar trappings of pre-1970 aesthetic practice, Viallat’s 1970/056 epitomizes the unbridled freedom and irresistible laissez-faire of the art and artists in this spirited, revelatory exhibition.