Photography is front and center in the exhibition, by the Dutch artist Corine Vermeulen at the David Klein Gallery’s contemporary art gallery on Washington Boulevard in Detroit, Michigan.  The exhibition is a collection of two separate bodies of work, one more grounded in her previous work depicting street portraits.  In this new figurative-based work, Nachtwerk, mostly shot at night, the figurative images are integrated in what might be called surreal elements.

In a statement, the artist says, ” I am intervening retrospectively in my own image making, doing something different with the images of the past.  This occurs during a time of ‘revival’ in Detroit when different processes are deployed over the same terrain, interfering with the historical round.” 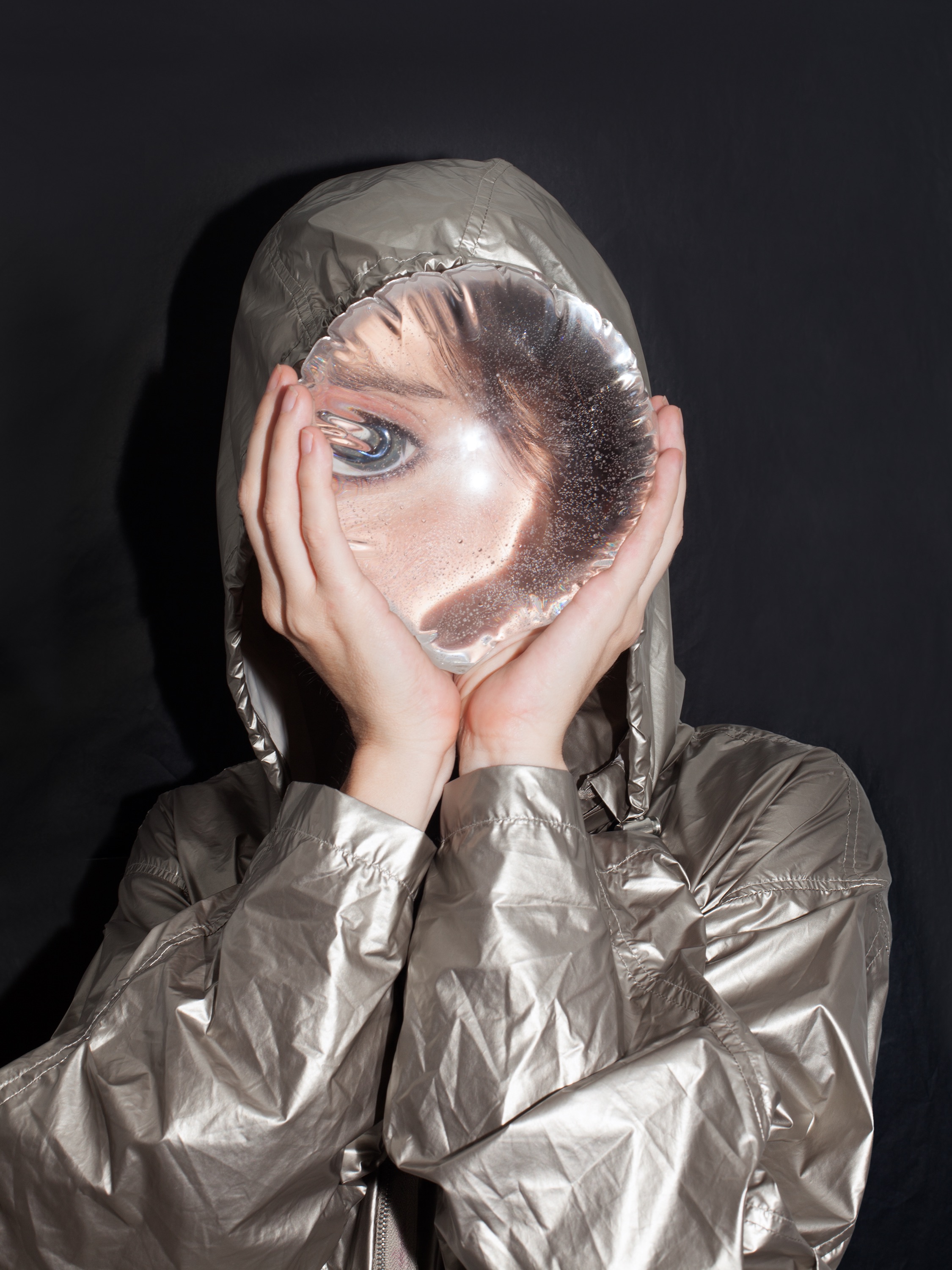 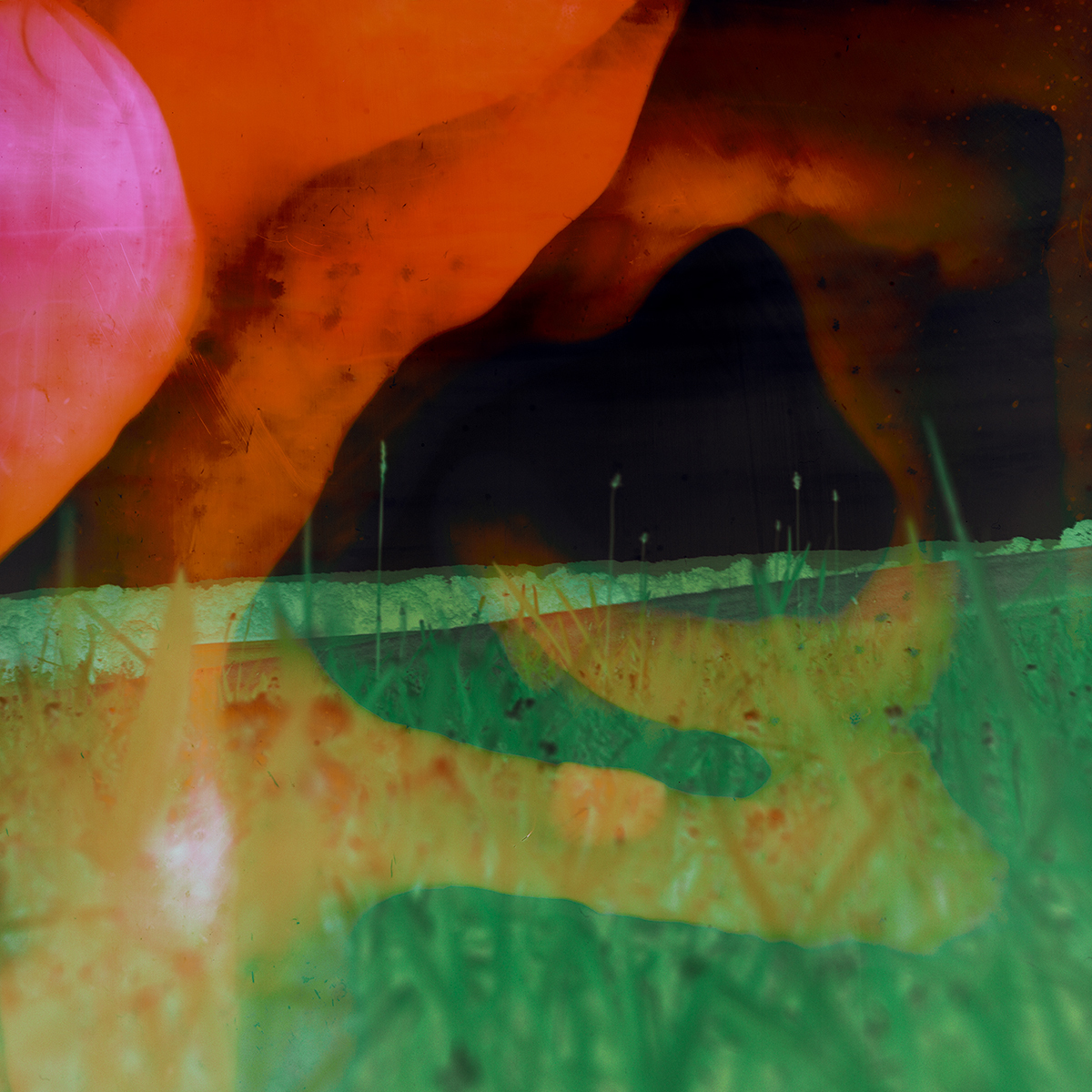 The second body of work, Kodak and the Comet,  the photography is comprised of large colorful abstract images. The idea of creating an abstract photographic image has been around dating back to artists experimenting with contact sheet photography, and more recently been executed by Frances Seward, Alexander Jacques, Ola Kolehmainen, and Graham Crumb, but these artists were capturing abstraction in natural environments where they are looking at their subject through the lens and taking an exposure.

What is different in these Vermeulen abstracts is that she is taking her existing film negatives (2.25 x 2.25”) and applying chemicals that move and distort the layers of color within the existing emulsion. (Spoiler alert: Not all images are created using digital technology.) This is why you see the numerals along the edges that help differentiate one negative from the next, something only found at the edges of the film. The end result could be achieved by trial and error, selecting a more desirable image, perhaps overlapping a negative or reworking the negative chemically until the required results are obtained. She may then possibly scan her negative and move into the digital printing process. To gain the size and scale of these prints, the artist needs to use a large digital printer where the photographic paper comes on a roll, and these kinds of sizes are obtainable. Vermeulen uses her existing color negatives as the vehicle to produce her lush and beautiful colorful abstractions. 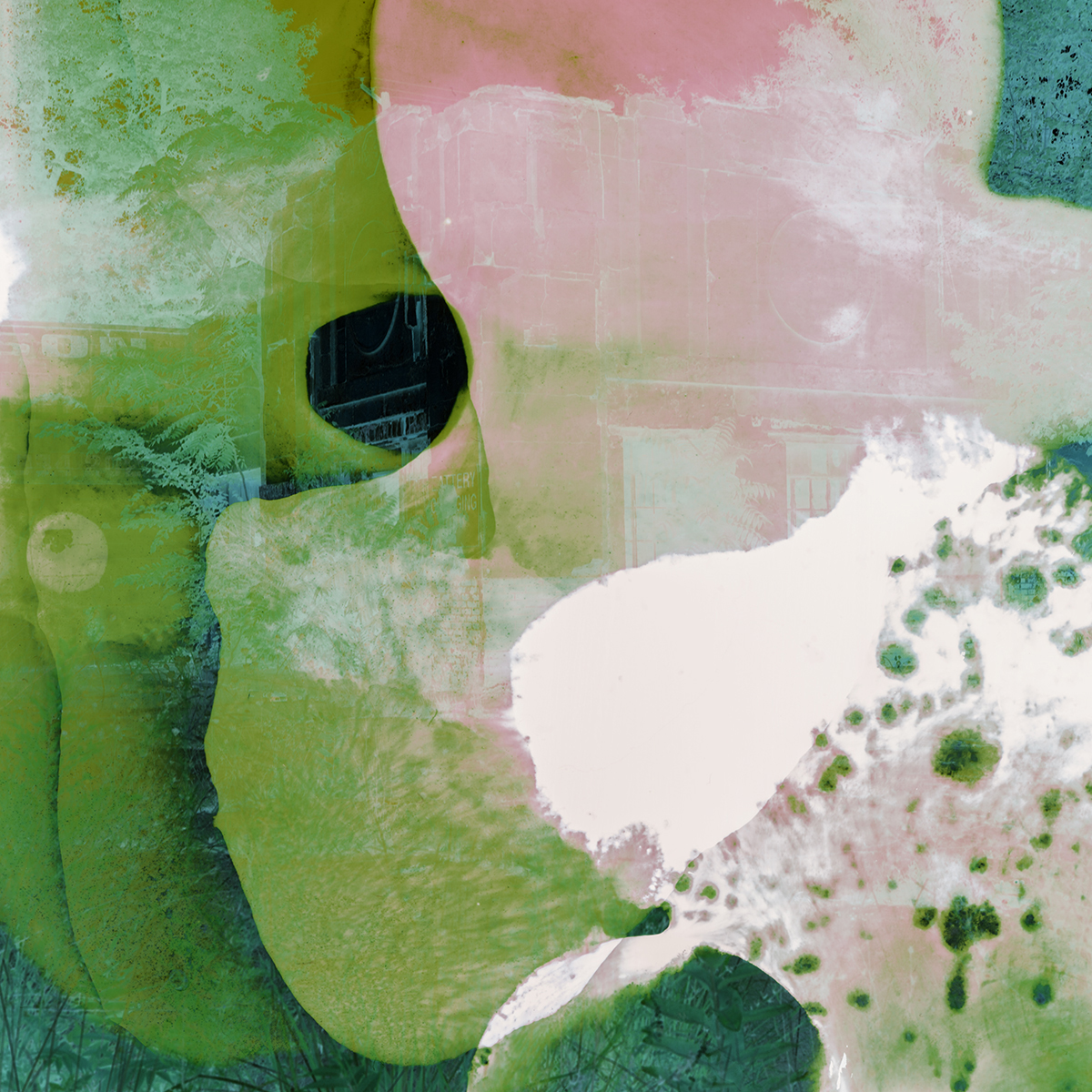 These organic manifestations of shape and color are manipulations of existing negatives, exposed slightly in the backgrounds be it landscape or cityscapes. Vermeulen has taught herself what drops of chemicals create certain colors in the emulsion.  Regardless of how the work is created, it is an appealing type of abstract expressionism on its own. 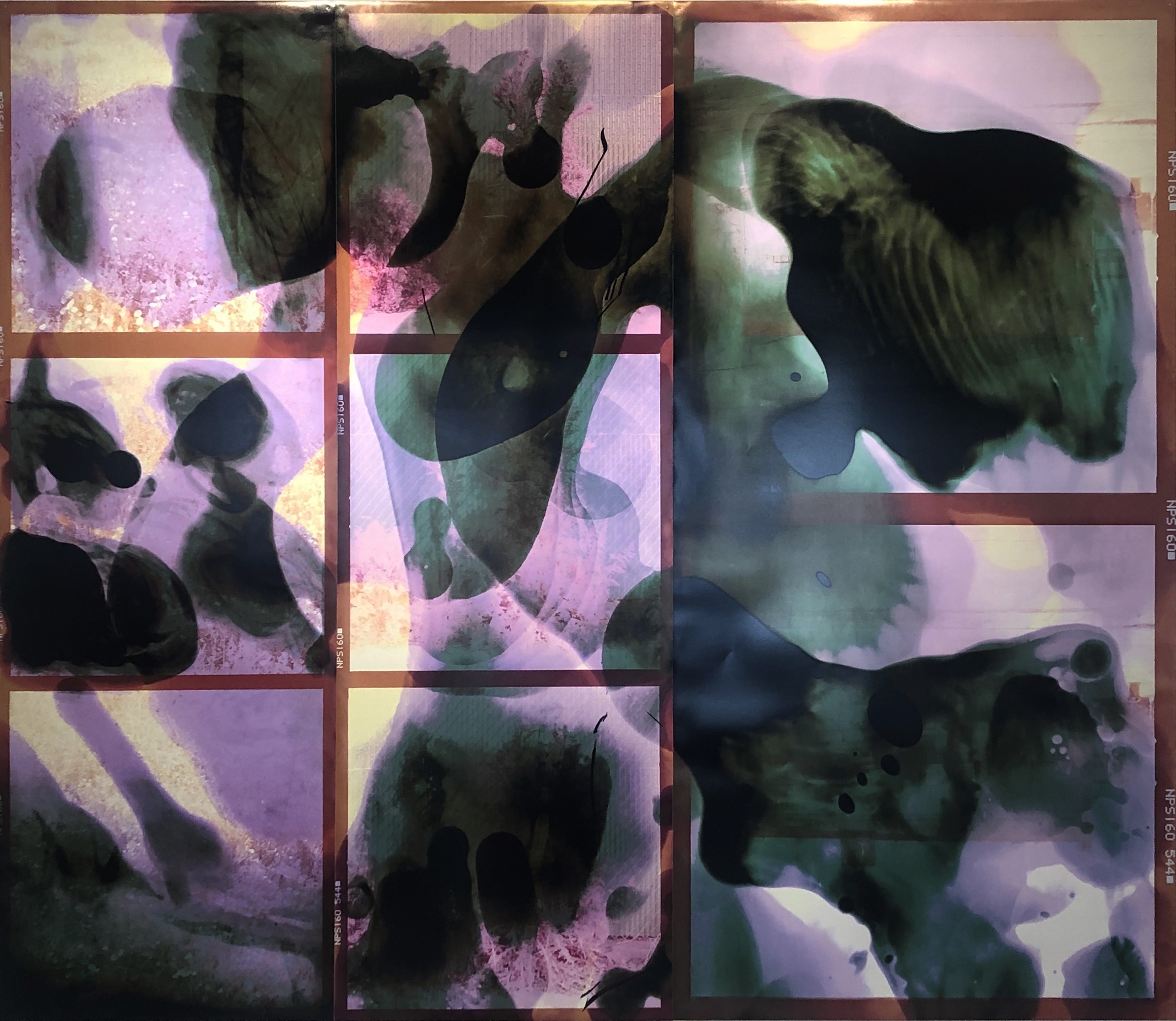 Many of the images are 42 x 42 inches, but in the large 209/LINEAR (Belle Isle) image, the square is divided up into eight related negatives creating an 84 x 98-inch image against the back wall of the gallery illustrating the factor of scale as it demonstrates the possibilities. These images are organic and poetic both in shape, form and color.

Corine Vermeulen is a photographer who set up her studio practice in Detroit in 2006 shortly after earning her MFA from Cranbrook Academy of Art and was selected as a Kresge Artist in 2009.  She is known for her long-term, immersive projects portraying resilient urban communities amid reinvention. Her photographs have been featured in The New York Times, Brooklyn Rail, Time Magazine, The Guardian and The Fader, among others. She has had numerous solo and group exhibitions at national and international venues, including a solo exhibition at The Detroit Institute of Arts: The Walk-In Portrait Studio (2015), and group exhibitions Constant as the Sun at MOCA Cleveland (2017), and This Land at Pier 24 in San Francisco (2018). 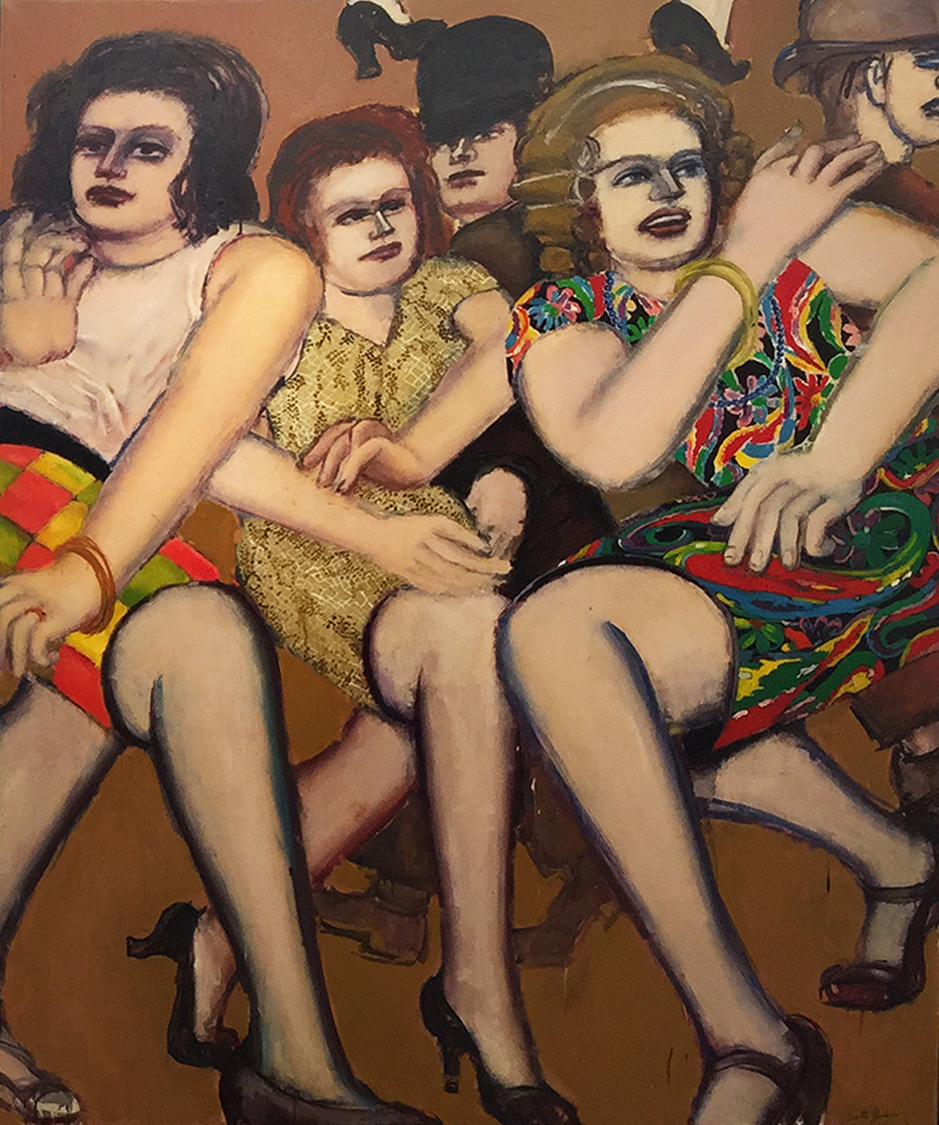 Established in 1990 as a gallery in Birmingham, Michigan, David Klein opened with both contemporary exhibitions and a specialty in Post War American Art. On his 25th anniversary in September of 2015, he began a second location in downtown Detroit devoted to contemporary art and continued with his Birmingham space dedicated to his thirty-two Post War American artists.  The American artist Lester Johnson’s work has been part of Klein’s compendium from early on and Klein recently opened an exhibition of his artwork March 16, 2019.

Lester Johnson was born January 27, 1919, in Minneapolis and after high school began an apprenticeship at the Cosmopolitan Art Company where he learned to copy calendar landscapes.  Determined to be an artist he studied at the Minneapolis School of Art, then transferred to the Chicago Art Institute. Johnson left for New York City.  After living in a variety of locations and studios, he established a studio space on the Bowery and ended up sharing a studio with Phillip Perlstein on 10th street. He eventually accepted an offer by Jack Tworkov to teach at Yale where he was able to work as an artist and raise a family in Milford, CT. 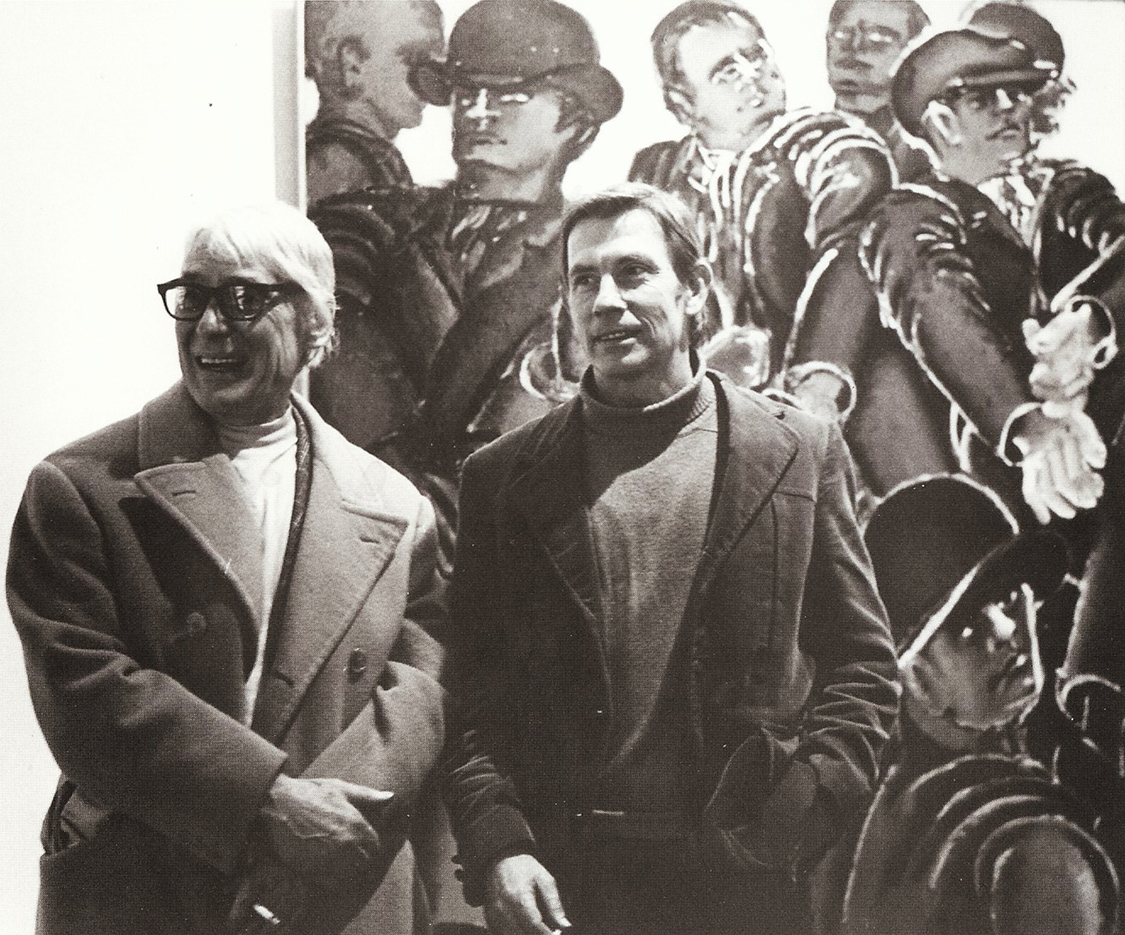 Perhaps no decade in the history of American art continues to generate quite so much debate as the 1950s, when the United States, and in particular New York City, supplanted Europe as the primary focus of international attention. The success of Abstract Expressionists like Jackson Pollock, Mark Rothko, and Franz Kline represented a kind of cultural coming of age in America at precisely the moment when the country’s military and economic fortunes seemed brightest. As a figurative expressionist and member of the Second Generation of the New York School, painter Lester Johnson remained dedicated to the human figure as means of declaration through the many stylistic changes of his body of work. In his formative years Lester Johnson was in the thick of the zeitgeist. It’s what informs the passion, energy, and enduring power of those early primitive works. There was angst and reckless risk taking. There was something demonic in the frenzied execution of the early heads and figures. Taking from the Abstract Expressionists he painted from the shoulder in broad, messy, drippy strokes as if Lester was striving to find the essence of universal man.

In a 2004 review Hilton Kramer approached the work as “…some painters have made it a fundamental tenet of their art to resist the templates of their own facility. Rather than aiming for ease of expression they deliberately cultivate certain obstacles to it, either through distortion in draftsmanship or by creating a facture that eschews suavity in favor of a distressed painterly surface. Figurative painters who came of age in the heyday of Abstract Expressionist aesthetic were especially likely to play a role in this effort to undermine the effects of facility.”

In New York, Johnson exhibited at the Martha Jackson Gallery, Zabriskie Gallery, and James Goodman Gallery as well as having been included in group shows at the Guggenheim, The Whitney, Museum of Modern Art, and Metropolitan Museum of Art. 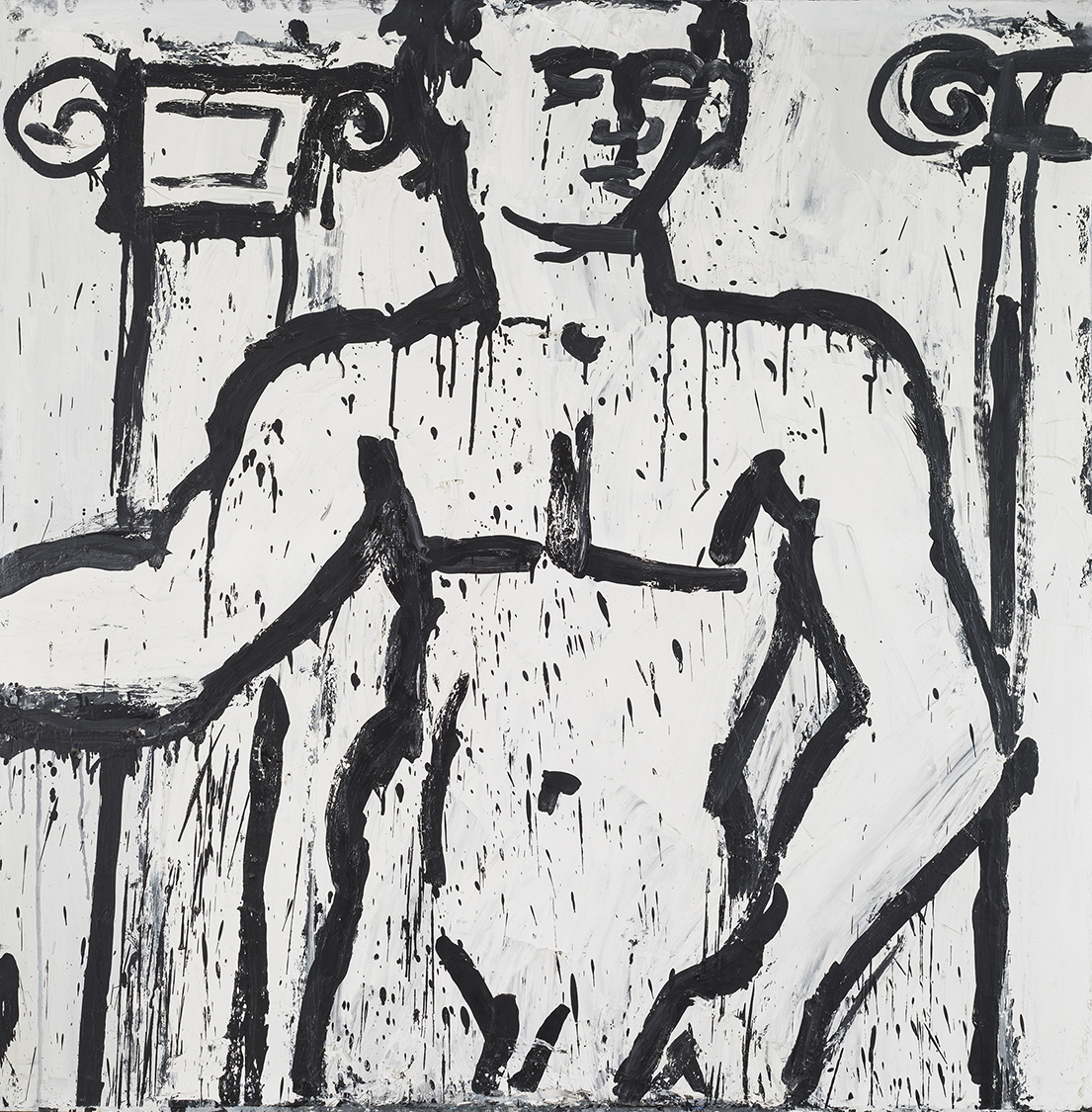 David Klein is a member of the Art Dealers Association of America (ADAA) a non-profit membership organization of the nation’s leading galleries in the fine arts. Founded in 1962, ADAA seeks to promote the highest standards of connoisseurship, scholarship and ethical practice within the profession. ADAA members deal primarily in paintings, sculpture, prints, drawings, and photographs from the Renaissance to the present day. Each ADAA member is an experienced and knowledgeable dealer in their field. ADAA has nearly 180 member galleries in 29 U.S. cities.