A series of works using denim constructions on the wall and mechanical miniature sculptures.

On the coattails of Art Basel in Miami 2019, the Reyes / Finn gallery opens the new year with Nick Doyle’s work Paved Paradise. This conceptual revisit to pop art skillfully displays American iconography, both the denim works on the wall and moving miniature sculptures. Pop Art of the early 1960s was exemplified by an enlarged work on canvas of a Campbell’s soup can by the artist Andy Warhol and the term “pop art” was officially introduced in December 1962; the occasion was a “Symposium on Pop Art” organized by the Museum of Modern Art.

When the viewer enters the exhibition, acrylic on canvas is the first impression, but on closer examination, it’s cut and colored denim on board that realistically creates the illusion. There is the apparent cliché associated with denim, a kind of masculine Americana that embodies these objects. There is a mix of signage, painting of objects, and moving miniature sculptures that captivate the viewing audience. 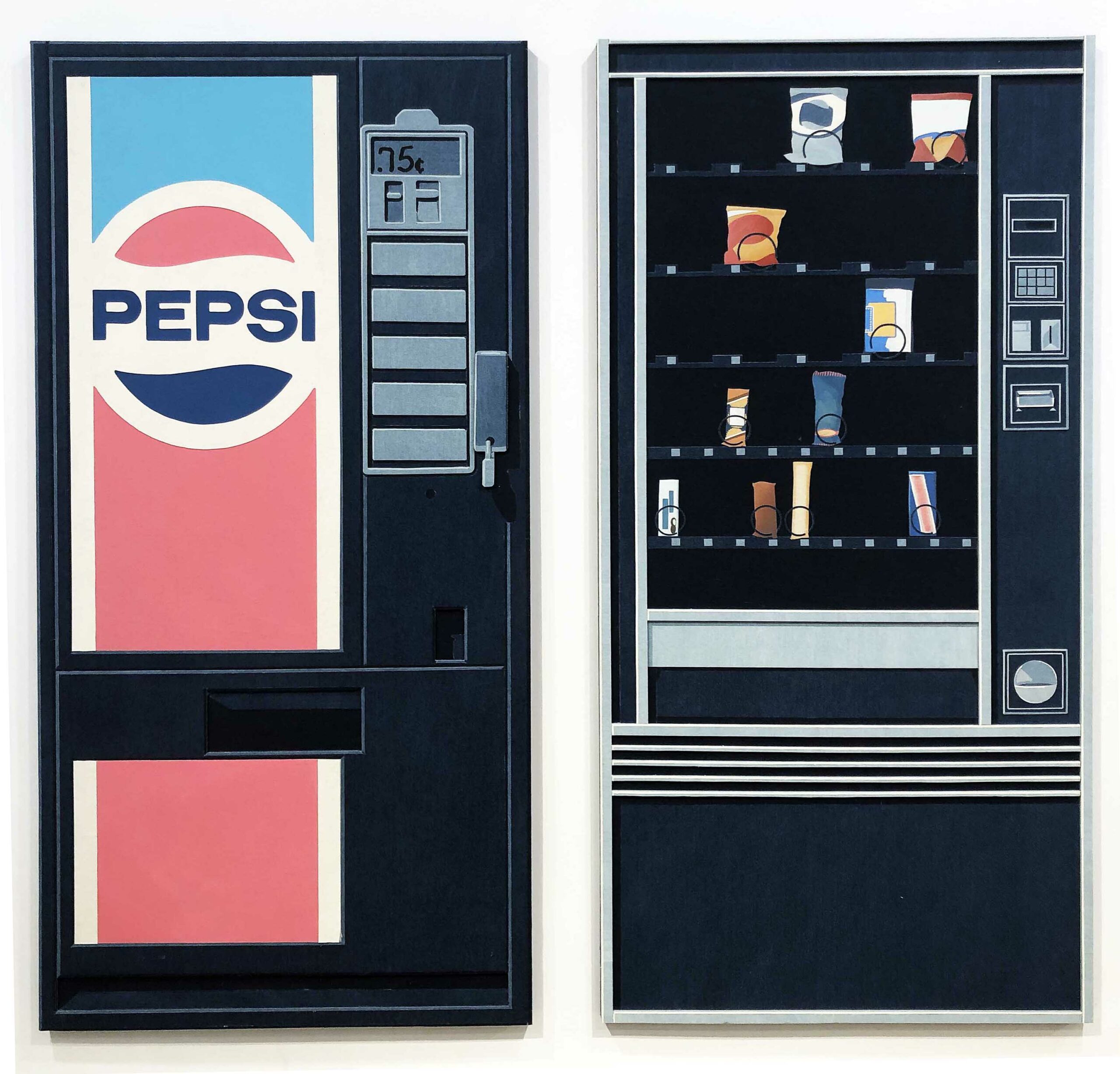 He says in his statement, “My Practice is multidisciplinary and often employs sculpture, painting, mechanical motion, and video. I look to media, particularly film, television, and photography as a source of imagery. I think of visual media like a pop culture database full of narratives pertaining to the cultural moment. My interested lies in what these narratives have to say about us as a culture, and the permission these narratives allow us as individuals. I think of my work as part of the psychological landscape of media culture. The objects, videos and machines that I make hold the psychic energy of my experiences and life, and allow me a way to engage with a broader visual discussion. I use a lot of commonly found materials often found in local hardware stores. I recently started using a lot of denim.” 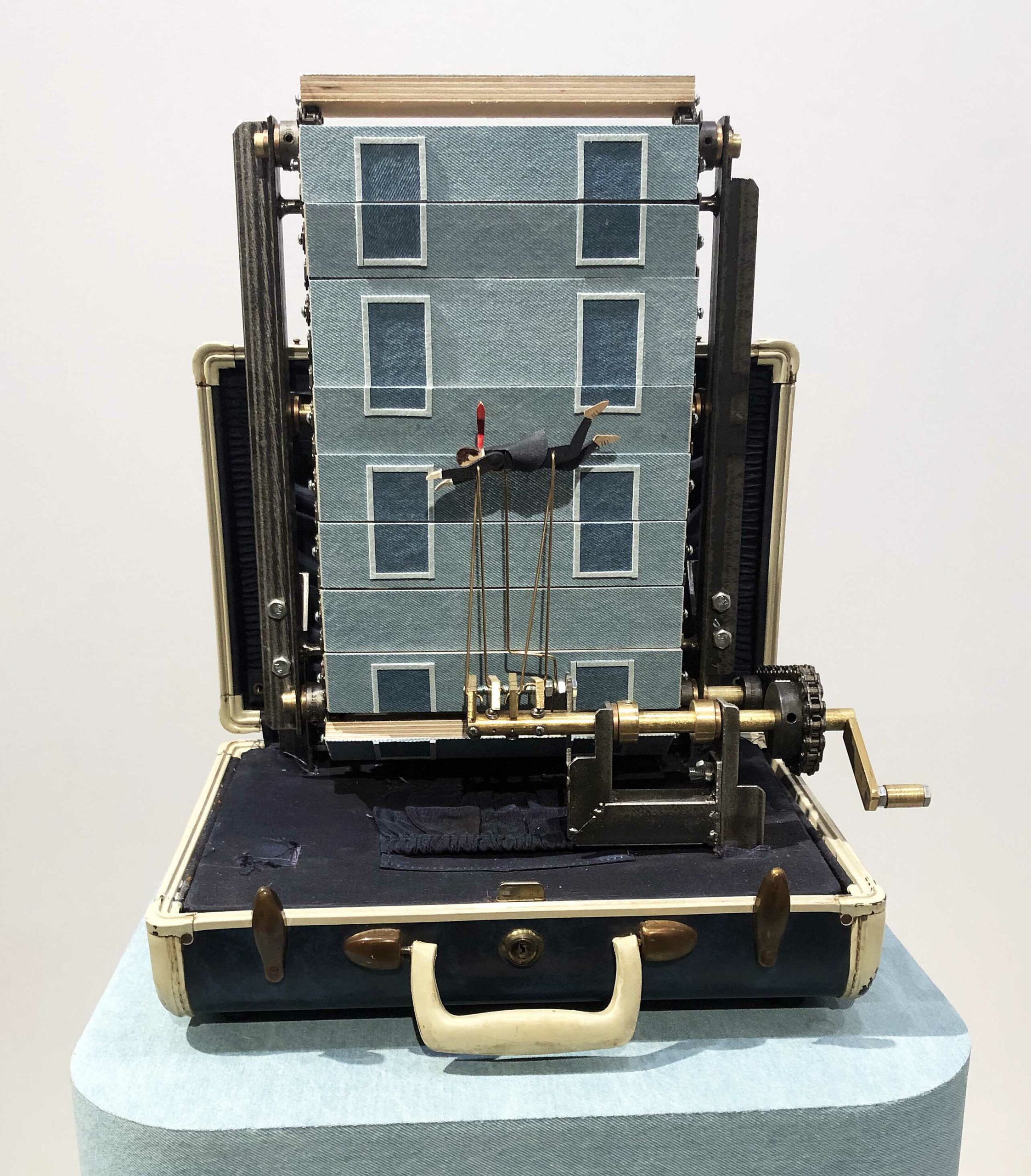 In the Falling Man, the customized suitcase has a figure of a man suspended mid-background, and as the crank moves the windows downward, the illusion is created. This work has a sense of humor interjected described by the artist as a sense of darkness (jumping out a window) and lightness (it’s not a real person) that contribute to an emotional journey. Regardless of the artist’s intentions, the kinetic sculpture reflects a level of craftsmanship that is respectful, if not extraordinary. 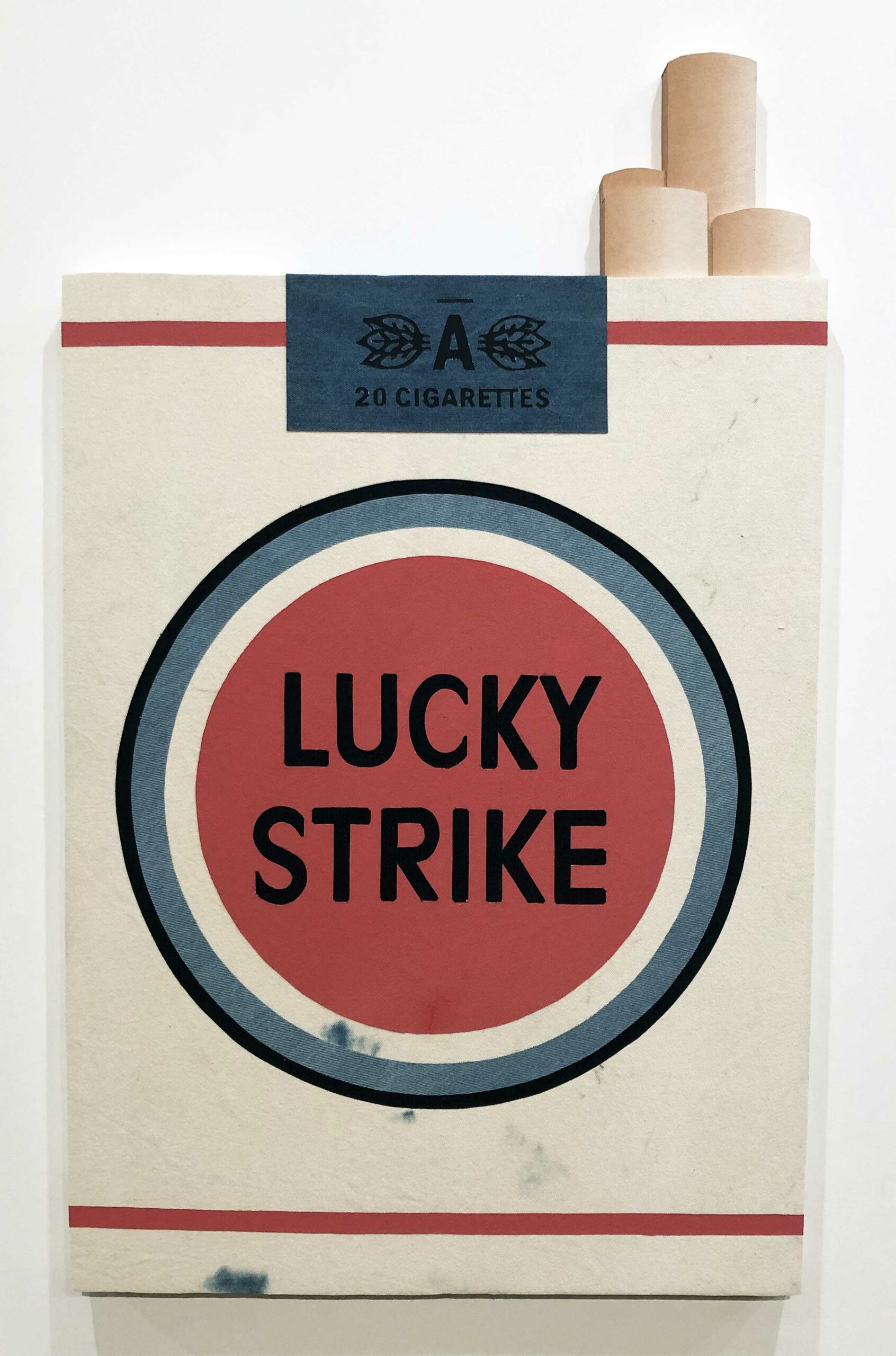 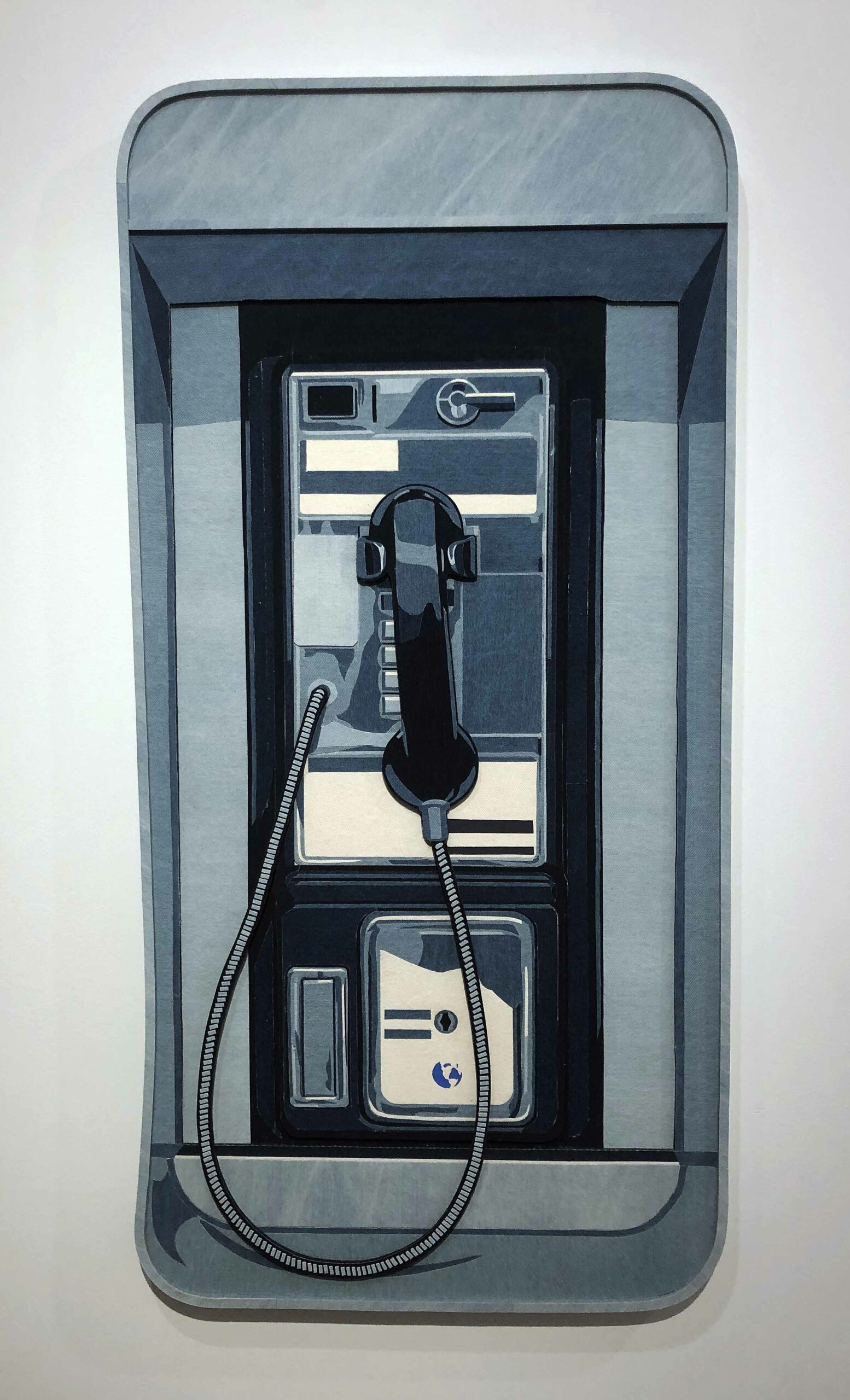 The two images of a package of cigarettes and a wallphone are conceptually pop art subjects, both in that, they enhance the scale of the object and are nostalgic in their intent. And that is not to say it is problematic, rather a matter of fact. As Landscape and Figure painting continue as a productive genre, why not Pop Art? 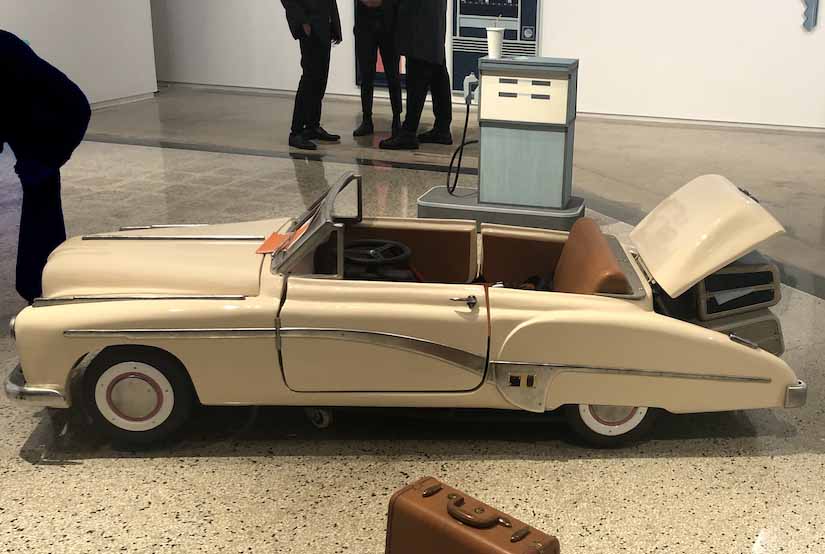 Doyle works across various platforms and media.  In work, Kwik-Stop and Executive Toy: Send in the Clown, 2019 is what I would describe as an installation piece because it creates an environment that includes a small car, gas pump, soda drink, and various suitcases. It also serves to illustrate that his thinking is non-linear or confined to one medium of expression. Growing up in Los Angeles amongst the media mecca of the world drenched in a land of fruits and nuts where the language is streamlined in pop culture, it seems to fit nicely within the creative work of Doyles’ experience. In an interview, he says, “In Los Angeles, wealth, glamour, and fame were commonly flaunted and in certain ways gave me a grotesquely warped sense of success. There is an entire landscape of shame to traverse when comparing oneself to the class and social hierarchies not only embedded in LA’s culture but pop culture as well.” 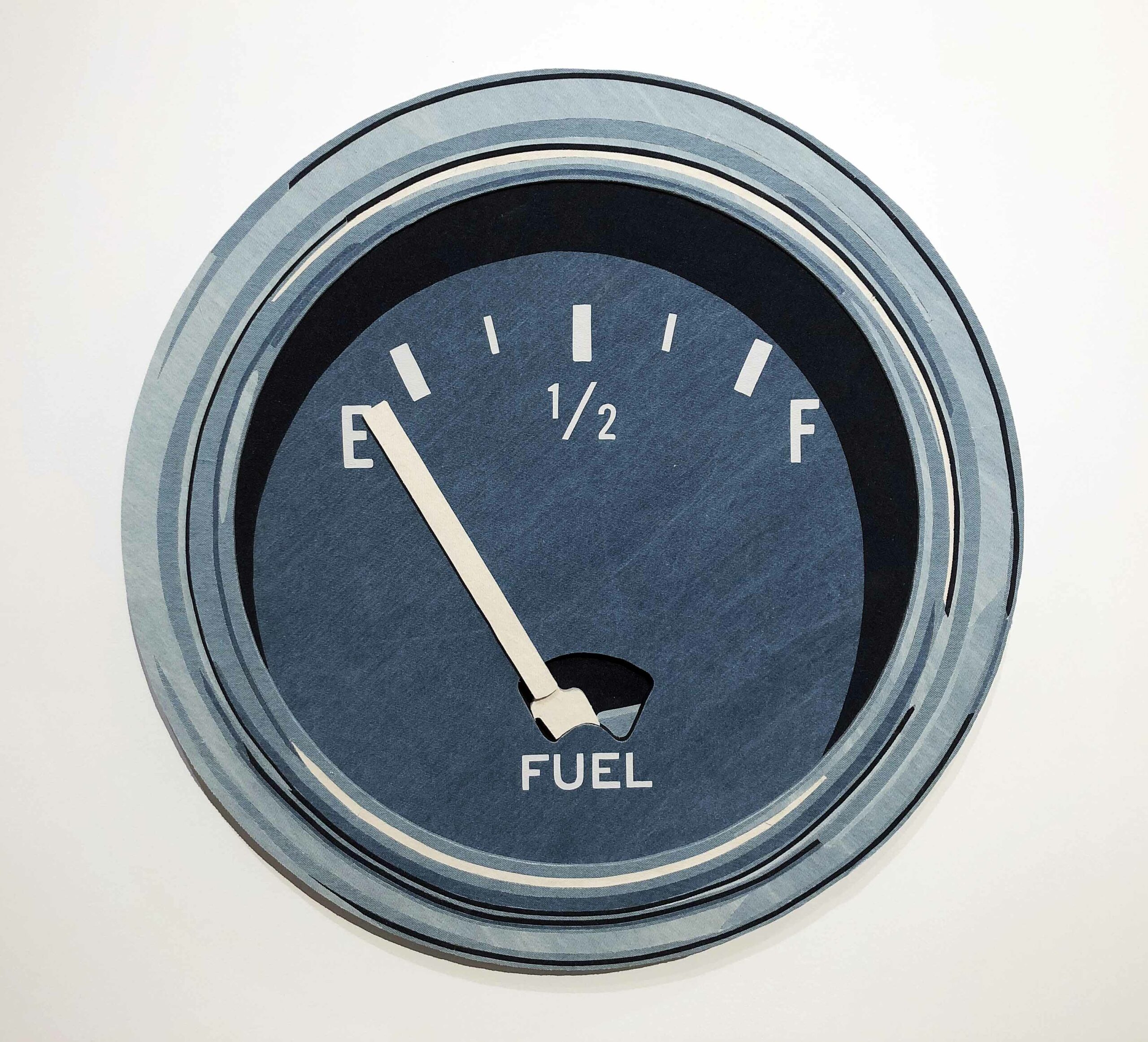 This large circular gas gage, Running on Empty, reminds me of the Jackson Browne song released with the same name, in 1977, before Doyle was born but written at the height of the Pop Art era.  Contrary to the title, Nick Doyle’s tank is full.

Nick Doyle was born in Los Angeles, 1983, and now works and lives in Brooklyn, New York.  He earned a BFA from the San Francisco Art Institute and an MFA in sculpture from Hunter College, NY.