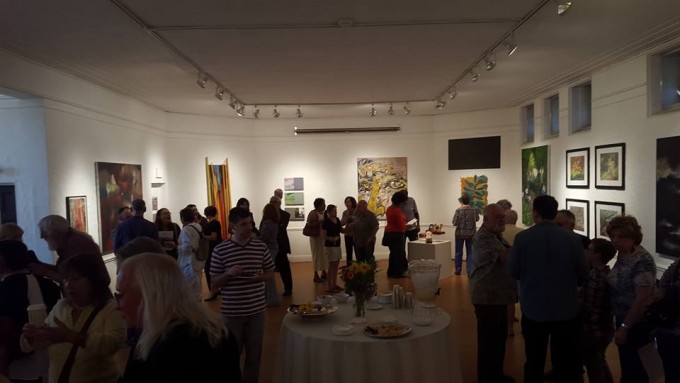 When you visit the Detroit Institute of Arts, you look only a hundred yards away and see the Scarab Club, active in the community for over 100 years and a thriving force for local artists.

The Scarab Club’s most recent exhibition, Natural Selection Works opened September 10, 2015 and is curated by Jim Pujdowski, a longtime member of the Detroit Artistic Community. In his statement, Jim says, “The ten artists selected for this exhibition have the untiring desire to create. Each artist stands on their own and together they signify the strength of what is Detroit art.”

The exhibition, dominated by Wayne State alumni, brings together a community of artists that have dotted the landscape for many years. The longtime and exuberant director of the gallery, Treena Ericson, says, “Curating is an art form of its own. In this exhibition Jim has brought together ten artists with distinctly different styles, yet the show has a beautiful cohesion.” As you enter, ponder the names of those artists who have exhibited on these walls: Diego Rivera, Norman Rockwell, Pablo Davis, Gilda Snowden and Robert Wilbert, to name only a few. 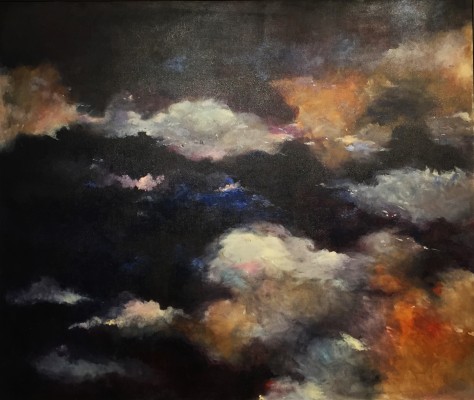 As part of her cloud series, and most recently exhibited at the Ellen Kayrod Gallery, Shirley Dombrowski Parish presents the viewer with After Midnight, a large oil painting that evokes a spiritual feeling, a backdrop for a Michelangelo figure, or possibly a metaphorical abstraction for creation. In her statement, she says, “The painting of the sky began after many years of studying landscape. I try to capture light and breeze. I am aware of the constant shifting of light reflection of the sky, the sunset, water. The light is forever changing. These paintings are perceptions of experience, a visual poetry.” In her collection of thirty or more of these cloud based paintings, her subtle interpretation, wide and varied, provides the viewer with a vast range of interpretations, many that feel like a meditation. They are both representational and abstract, that create a kind of tension or play that may very well bring the viewer back again and again. 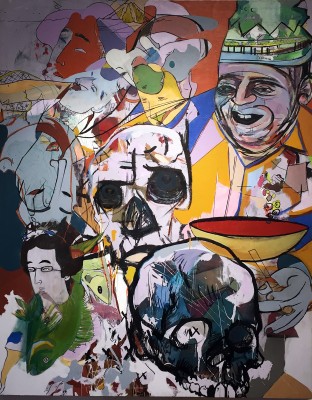 An exception to an aging generation of artists in the exhibition is Andrew Blake with his painting Untitled 1, where he combines both figurative imagery with abstraction that invites the viewer into a complex composition relying on a diverse color palette and black line. The young artist attended the University Liggett School in Grosse Pointe before enrolling at the Maryland Institute in Baltimore, Maryland. Some may recall his exhibition at the Cass Café or know him from his musical performances at the Cadieux Café. The strength in Untitled # 1’s composition is the large figure in the upper right juxtaposed against the collage of abstract shapes, smaller figures and an array of line and shaped overlay. 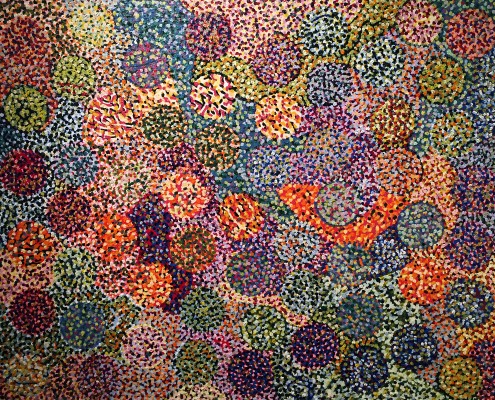 In this pointillist abstract composition, artist Carlo Vitale uses the circle as his theme for a colorful oil painting. The Detroit born artist says his influence often comes from working on a relative’s farm in the Michigan thumb area. Much of his work is devoted to a geometric grid approach to composition, with work that resembles a mosaic at a distance. He says, “My work is influenced by agricultural themes along with the colorful imagery of everyday life. The work generates kinetic and optical effects that are conjured up from music obsessions and the spirituality found in the art process.” 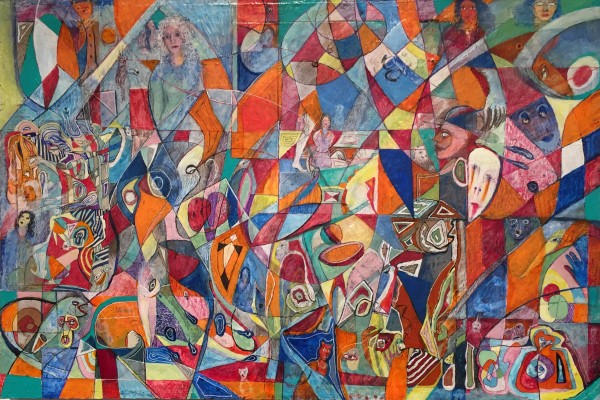 Some may not want to re-visit Cubism, but I am guessing Robert Quentin Hyde might be a fan of Picasso, Fernand Leger, Georges Braque, and Robert Delaunay. In his intricate painting, Untitled #3, he unleashes the design of cubism and adds multiples of the feminine figure with an equipoise of primary and secondary color values. Yet another Wayne State University grad, who is known for his paintings that contain the heads of many women, Hyde builds in this composition a strong force of blue and orange that skillfully fuse the hermetic and detailed shapes together.

As a seasoned curator of exhibitions at the Liggett Gallery, Jim Pujdowski has sewn together familiar names and artwork by some of the better-known artists in the Detroit area. And what a better place to kick off the 2015 fall season than the Scarab Club where a team of people work hard to bring performance, literary events, and visual art exhibitions to midtown Detroit.