The David Klein Gallery opened its new doors September 17, 2015 at 1520 Washington Blvd. in downtown Detroit. The gallery will keep its original space in Birmingham, Michigan that opened in 1990, while the new downtown location is home to its contemporary program.

The First Show is a group survey of the living artists represented by the gallery, many of whom work in the Detroit Metro area. The new gallery provides 4000 square feet of space, twelve foot-high ceilings, and hardwood floors – so much space that if you blinked, you might think you were in a New York City gallery.

David Klein’s decision to move to downtown Detroit is a gamble. He is betting on the future of the City of Detroit, much of which is improving weekly before our eyes. The move, along with Wasserman projects, follows 323 East, Inner State Gallery, and The Butcher’s Daughter who took the leap to New York City. I have to say, it turned my head when Campbell Ewald, the premier ad agency formerly located across Van Dyke from the General Motors Tech Center, moved a year ago to Brush Street, sandwiched in between Ford Field and Comerica Park. For me, it was one of many signs that people and investment were moving into Detroit. 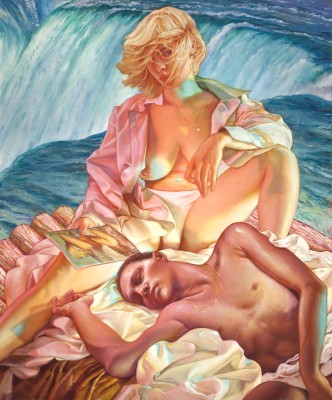 As you enter the new gallery space, the figure painting on your right, Niagara Pair, by Jamie Adams, is a knockout oil painting from his Niagara series that requires a long look. Adams earned his MFA from the Pennsylvania Academy of Fine Arts, founded in 1805, that hosts a vigorous faculty and each year has visiting critics program. Even today the school has a reputation for pedagogy that addresses technical skills, and this training is evident in Adams’s work which has a technical competence not seen much these days (an exception would be Robert Schefman). When one views his body of work, it has a mid-1700s neo-classical feel. The canvases are inhabited by contemporary figures that often have Niagara Falls as background. Gazing looks between short-haired foppish men and women predominate. 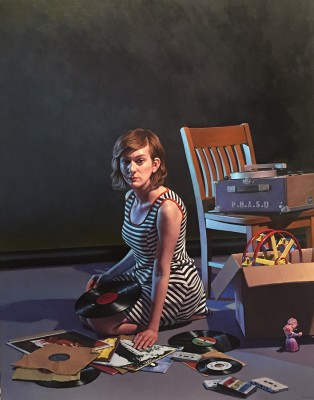 Robert Schefman’s photo realistic figure painting is even better illustrated in this new painting, Phasd, where he follows his recent trajectory of the figure, nostalgic toys. Here the young woman looks into the audience (often not the case) from an interior room with dramatic stage light. It is as if you have caught and startled her rummaging through her old records. He may want to take us back in time to antique toys and vinyl 45s and 78s on turntables. In much of his earlier work, the figures are on a treasure hunt or attending a burial. He says, “This stuff would form family histories, be the backbone of every Ken Burns narrative, but digital storage is not so stabile, and the changing formats mean that personal information will not be around for my grandchildren to discover.”

The amount of space above the subjects is more than needed, but that is obviously intentional. The space is a counter balance to the activity below, and is perhaps a new element in his work. I interviewed Schefman for a solo exhibition in 2012 and asked him what artist he admired. “If anything, I had always appreciated Philip Pearlstein. He was the closest thing to the abstraction of the figure, in the way things are placed on the page, or chopped off – the way he uses shape and form – it seems as though the figure and objects are incidental to the shapes and color is incidental, but there is not a heavy content in Pearlstein and I was looking for more content.” 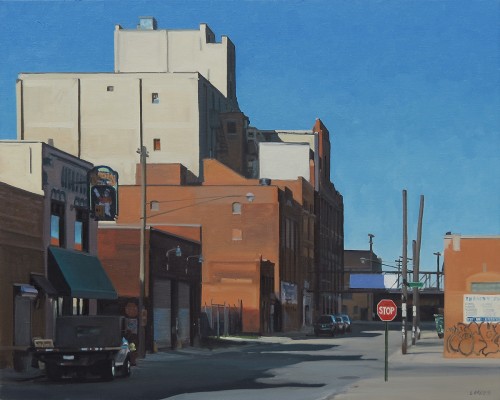 Stephen Magsig is a painter of discipline and routine. In addition to his work at the David Klein Gallery, he also exhibits his realistic urban and industrial landscapes at the George Bills Gallery in New York City. The discipline and routine that I refer to is his blog, Postcards From Detroit that contains 5 X 7-inch oil on linen, Hopper-esque paintings of scenes in and around Detroit. I am guessing he starts one of these small paintings outside, takes an image, and may finish in the studio, or maybe he knocks it out on location. He says in Painting Perceptions, “I have always enjoyed drawing even as a child/ I was in 3rd grade when I realized the joy of making artwork. I did a chalk mural on the blackboard and it made me aware that I had a special gift. I have been doing some kind of art ever since.”

It is hard to ignore the influence Edward Hopper must have had on Magsig, but it does not take away from the many paintings he has made that have nothing to do with Hopper, especially the portraits of storefronts, paintings of train wheels, with more attention to light, reflection and detail. His painting, Eastern Market, typifies his Detroit industrial landscape work: strong composition, with low light providing the right amount of drama. On his website he says, “I work in oils on linen canvas and linen panels in the simple and direct Alla Prima method. Although my work is representational, I am more interested in the “Story” of the scene and the “Plasticity” of the paint than in creating an exact representation of the subject.” 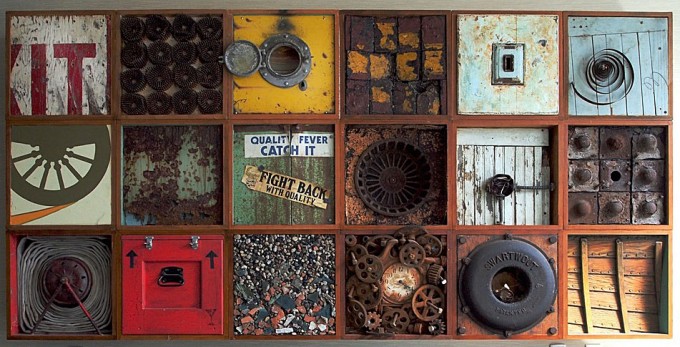 On the rear wall of the new David Klein Gallery is a large section of a Scott Hocking and Clinton Snider collaboration. Relics, 2001, part of what was originally a much larger installation, but that consists now of 66 18 X 18-inch boxes of mixed media. At its original display at the Detroit Institute of Arts for its Tri-Centennial Celebration, the installation consisted of over 400 boxes that chronicled the 300-year history of Detroit by using found objects. What makes it particularly interesting is that it finds itself reconfigured from time to time, as it does in these 66 boxes of man-made found objects that take up most of the back wall of the gallery. Also, it’s my understanding that this work is ongoing, and each artist occasionally might contribute a new box to a new configuration, site specific. Perhaps it was artists like Hocking and Snider that played their part in drawing people back to the city. In Relics, they collaborate, install, save and inspire with an artistic and sensitive approach to creating a grid of reclaimed objects. Could the installation have gradually become a metaphor for what was once thought of as old, decayed, downtrodden and obsolete? Does it not help us all to realize that Detroit is rising from the ashes?

I asked Christine Schefman, Director of Contemporary Art for the Gallery, how long has this gallery development been in the works? “It’s been three years from the time David and I saw the movement to Detroit. We spent time looking at a variety of locations and settled on this space, and its proximity to Woodward. I think David has always wanted to be in Detroit.”

The new David Klein Gallery has happened at the right time and in the right place. Certainly, this new space will provide a better opportunity to exhibit larger work that includes painting, photography, sculpture and installation. There is no doubt that both the art and business communities will take notice. Princeton University’s Center for Arts and Cultural Policy published a study on how the arts impacts communities. To summarize the lengthy study, the arts draw people together, foster trust, becomes a source of pride for the community and increase civic engagement along with a further collective action. Don’t be surprised if the David Klein Gallery becomes an anchor for more art related venues in the neighborhood.

This September marks the 25th Anniversary of David Klein Gallery.