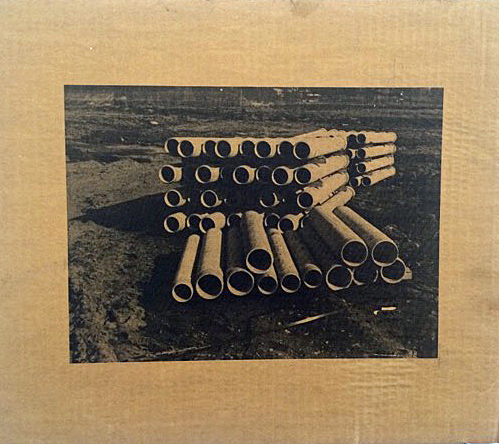 The prevailing stereotype of Detroit’s ’60s and ’70s iconic Cass Corridor art scene is misleading. Images of beer-swigging, dope-smoking, post-adolescent boys, spitting on studio floors and recycling beer cans into expressionistic, assemblaged sculptures with which they hoped to violate the hallowed halls of the Detroit Institute of Arts come to mind. It was a myth created by romantic souls who tried to rescue bohemia from Detroit’s growing derelict landscape. Of course there was also a considerable population of heady, intellectual /artist types who cowed up around the Detroit Institute of Arts, read books, went to arty films, listened to music other than the MC5, even went to the opera and had jobs too. Artist Jim Crawford who has a mini-retrospective at Trinosophes, a performance space in downtown Detroit, seems like he could have been one of those. 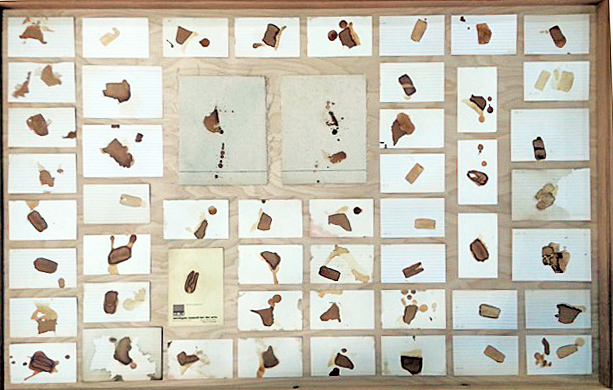 Crawford’s art is marked by a psychologically reflexive interiority—it occurs more in the mind as noumenon than as object or phenomenon—and makes what seems an ordinary material world into the extraordinary. Simple gestures or processes, replacing the traditional romance of creating a single object, are repeated and accumulated to explore a sense of time and evolved change, and to challenge our perception in an artistic process sometimes referred to as Conceptual Art. In 1970, in a beautifully measured and meditative ritual production, Crawford translated his daily cups of tea at his job at the Michigan Council for the Arts into a very deliberate series of over one hundred tea bag stains on 3”X5” cards. In the Trinosohes gallery, the tannic-colored blots have been arranged on a grid in two display vitrines to accomplish a stunning array of difference and signifying presence. Each stain records a moment with countless daily variables (temperature, emotional presence, gravity, haptics), or what acute perception can distinguish, becoming a sign of those variable influences as much as a thing to perceive in itself.

Like many artists Crawford works serially, and the Trinosophe exhibition features six main series that he has explored from the late ’60s until now. The most conventional form in the exhibition (created in the early ’70s, and of which seven individual examples are exhibited) is composed of sheets of paper folded into flat, randomly occurring geometric shapes, punctuated with staples, and marked or patinaed with graphite or paint. Created to be two-sided, they are a unique composition like nothing else: resembling geometric clouds (each is magnificently unique, but best experienced together so go see the show), and apprehended or readable more as signs than as objects. As in the best of human productions, the materials have dictated the form. In a public interview at the gallery, Crawford quipped, “I had a long staple gun,” allowing staples to reach and punctuate everywhere on these manipulated forms, depositing dash-like marks, leaving shadows and an almost musical notational presence. The scribbled or shaded graphite illuminates and posits a “natural” surface (think birch bark); and the creases of the folds give the pieces a sense of volume and mass, but therein lies the challenge. They suggest dimensionality or objectivity, yet are ultimately inscrutable, seductively flat signs, abstracted and void of referent. 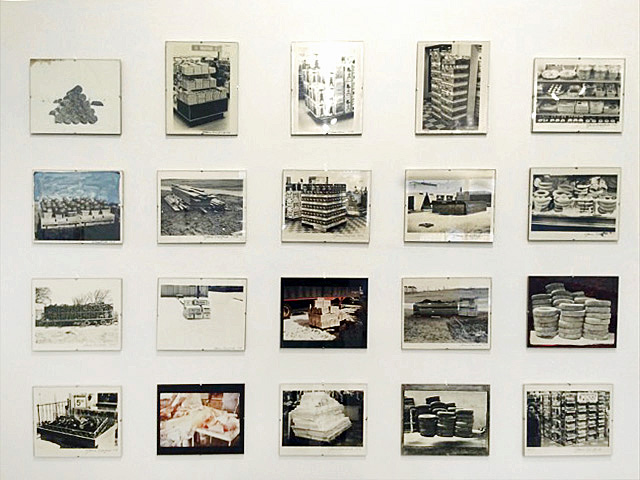 There is also a suite of photographs that document what Crawford has called the “Pile Series; discovered throughout the city, they record the presence of piles of various industrial or commercial materials that seem, through Crawford’s discerning eye, to achieve the status of sculpture. No doubt he has positioned these twenty images to both serve as ironic description of the identity of the artist (suggesting perhaps that art challenges perception, enabling it to discern “found objects” or objets trouvés as art, thus emphasizing the prominent part that ideas and concepts play in perception), as well as to call attention to the compelling nature of our landscape, and to create a dialogue that compares art to the supposed randomness of everyday material reality. Included in the series are photos of stacks of snow fence, old tires, boxes of fruit, and lumber at a construction site. Each of the photos reveals the particular effect that weather, light, and context play in conditioning both the appearance of the particular stack and our perception of it. The raw quality of the 40-year-old 8”X10” black and white photos and derelict framing of them adds a certain historical charm to the project. 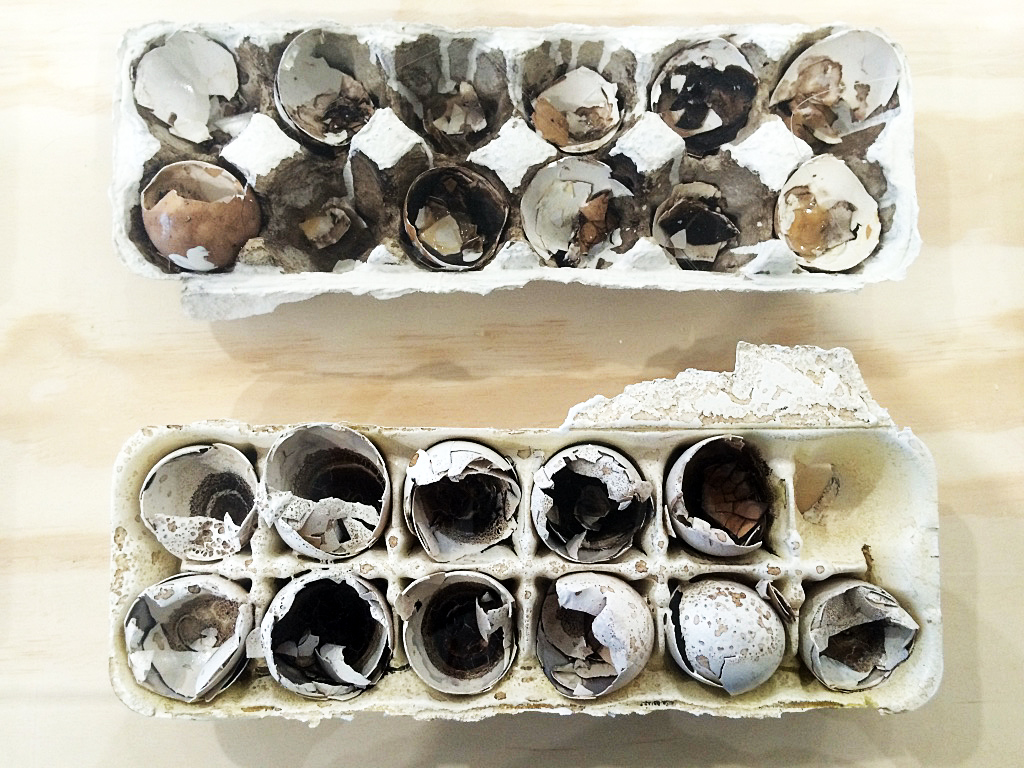 Two recently created series echo Crawford’s earlier strategies for dealing with recycled materials with an emphasis on personal biographical influences. Inspired by his grandmother’s practice of reading tea leaves at the kitchen table, Crawford, while cooking, has recycled cracked egg shells back into their cartons to produce stark abstracted images of the roundness of eggs. Like his grandmother’s tea leaves, the organic byproducts of his everyday life have become signs: a circle in a square, an egg in a carton, dyed with walnut stain from his walnut tree — painted and decaying they are ever changing and evolving. The delicate egg shells may at first appear as mere garbage or waste, but emerge with a powerful, though fragile, talismanic presence. 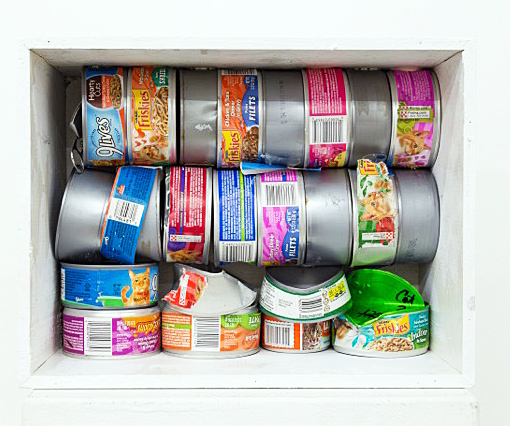 In another series, Crawford has engaged Midnight, a stray black cat that wandered into his garden, to create the Cat Can Series. “An unlimited supply” of cat food cans from feeding Midnight becomes the material for a somewhat awkwardly stated, perhaps eccentric arrangement of aluminum cat food cans in various conditions: some painted or stained green (Midnight’s eye color), some crushed, some with labels intact (9 Lives and Friskies being the preferred brands), and all enclosed in boxed frames. Employing the same stacking gesture as the early 1970 series, Crawford resuscitates the theme of exploring the visual landscape for architectonic structure.

In wandering through Xavier’s modernist furniture store on Michigan Avenue in Detroit, Trinosophe’s co-director Rebecca Mazzei, along with Joel Peterson, ironically found a stack photos that intrigued her. Pursuing the maker of the photos, she rediscovered the seemingly forgotten artist and art of Crawford. In researching, organizing and designing the exhibition “Jim Crawford,” she has energetically brought to our attention one of the most intriguing figures of the Cass Corridor, one whose work challenges perception and through its changes translates time into evidence for the consideration of big ideas. The exhibition includes various support materials from Crawford’s own archives, such as a post card series and ring binders and files containing Crawford’s copious notations on his projects.

Jim Crawford at Trinosophes – Through December 23, 2016