The Birmingham Bloomfield Art Center kicked off its 2017 fall season with exhibitions in all of its galleries, highlighting painting, sculpture, photography and ceramic work. 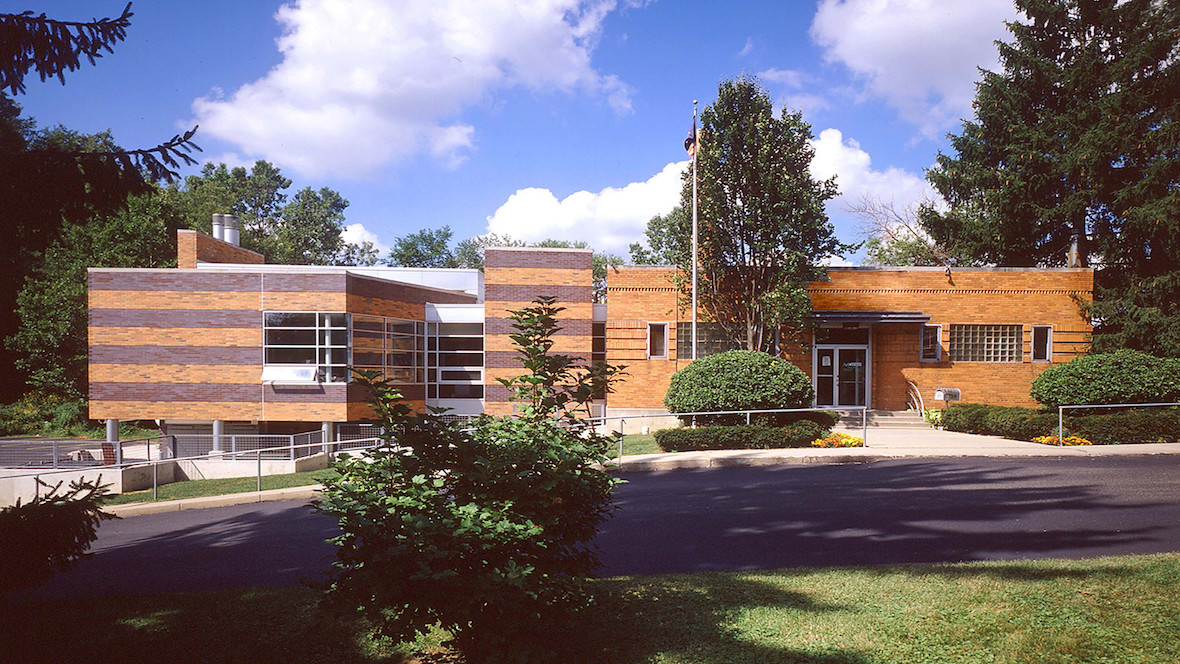 For a non-profit that was established in 1957, the BBAC continues to connect people of all ages with art from every part of the Detroit Metro Area.  These new exhibitions in all the galleries are good examples of how they provide venues for a large variety of artists.

The current exhibition in the large central gallery is an exhibition titled Simultaneous Contrast and illustrates how differently two artists approach figure painting. It is interesting that both artists came from the L’Anse Creuse High School program under the instruction of Ken Hoover during the early 1970’s and then went on to pursue their different paths in visual art. 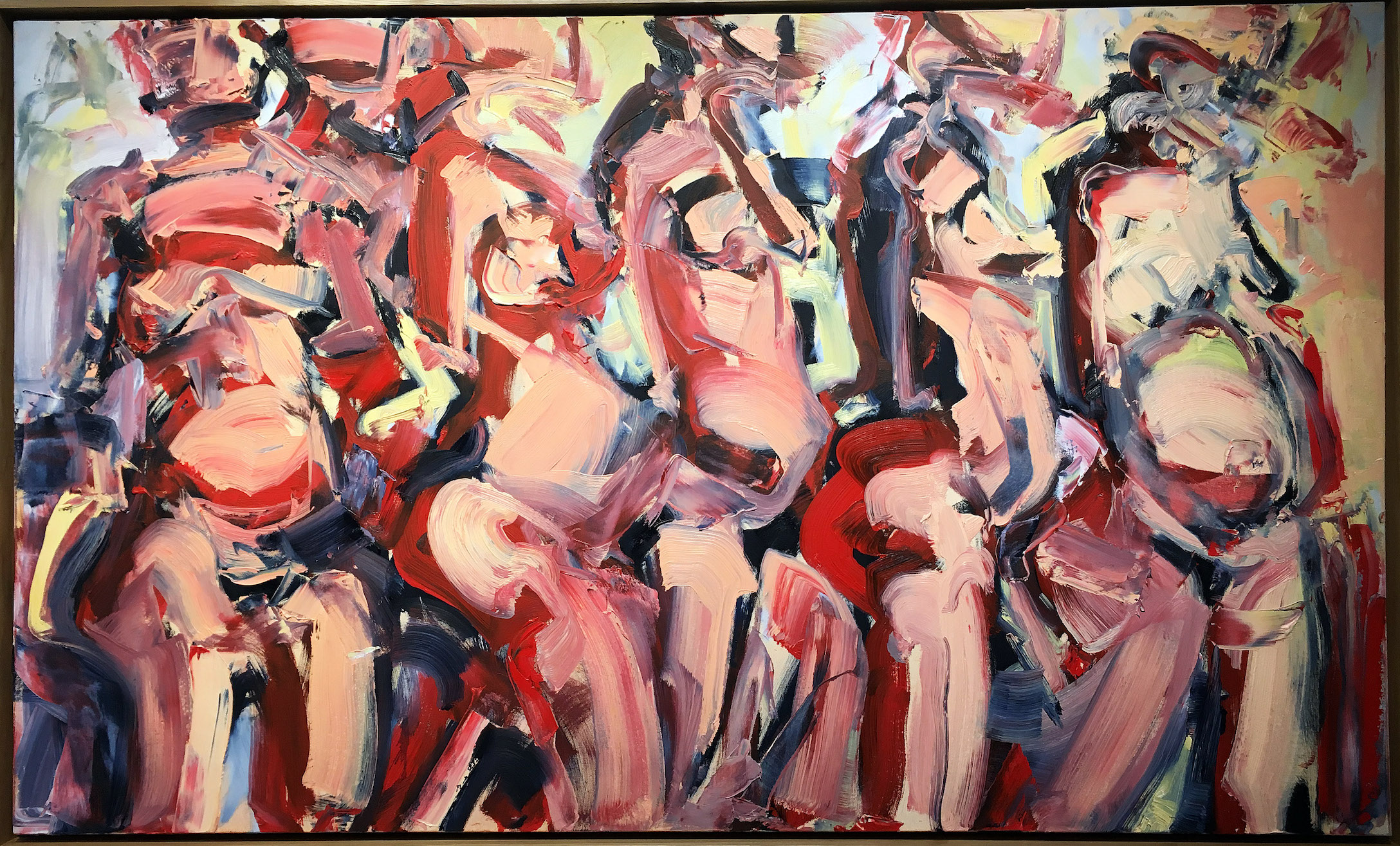 In her painting Primary Passage VI, Ritche demonstrates her interest in process and the intrinsic qualities in oil paint where she delivers a loose abstract expressionistic interpretation of the figure(s). The surface, the brush-stroke action, and the moment, characterizes the way she renders the human form. Supported by strong gestural drawing the painting successfully communicates movement.  She says in her statement, “My work with the figure has been ongoing and is related to my interest in the qualities of figurative movement and the idea that there is a “shared” sense of the human figure moving through space that creates a “felt” or identifiable rhythm that belongs to and is uniquely recognized.”

For this writer, the artist came along at a time when influences from the 1960’s, artists like Arshile Gorky and Willem de Kooning, were taking the art world by storm, supported by New York critics, Clement Greenburg and Harold Rosenberg.  But the language of painting the human figure as been with us since the art work done in the prehistoric caves of Dordogne, France and will be with us for some time to come. Christine A. Richie holds a MFA in Painting from Pratt Institute in Brooklyn, NY where she lived and worked for 23 years before returning to a studio in Detroit. 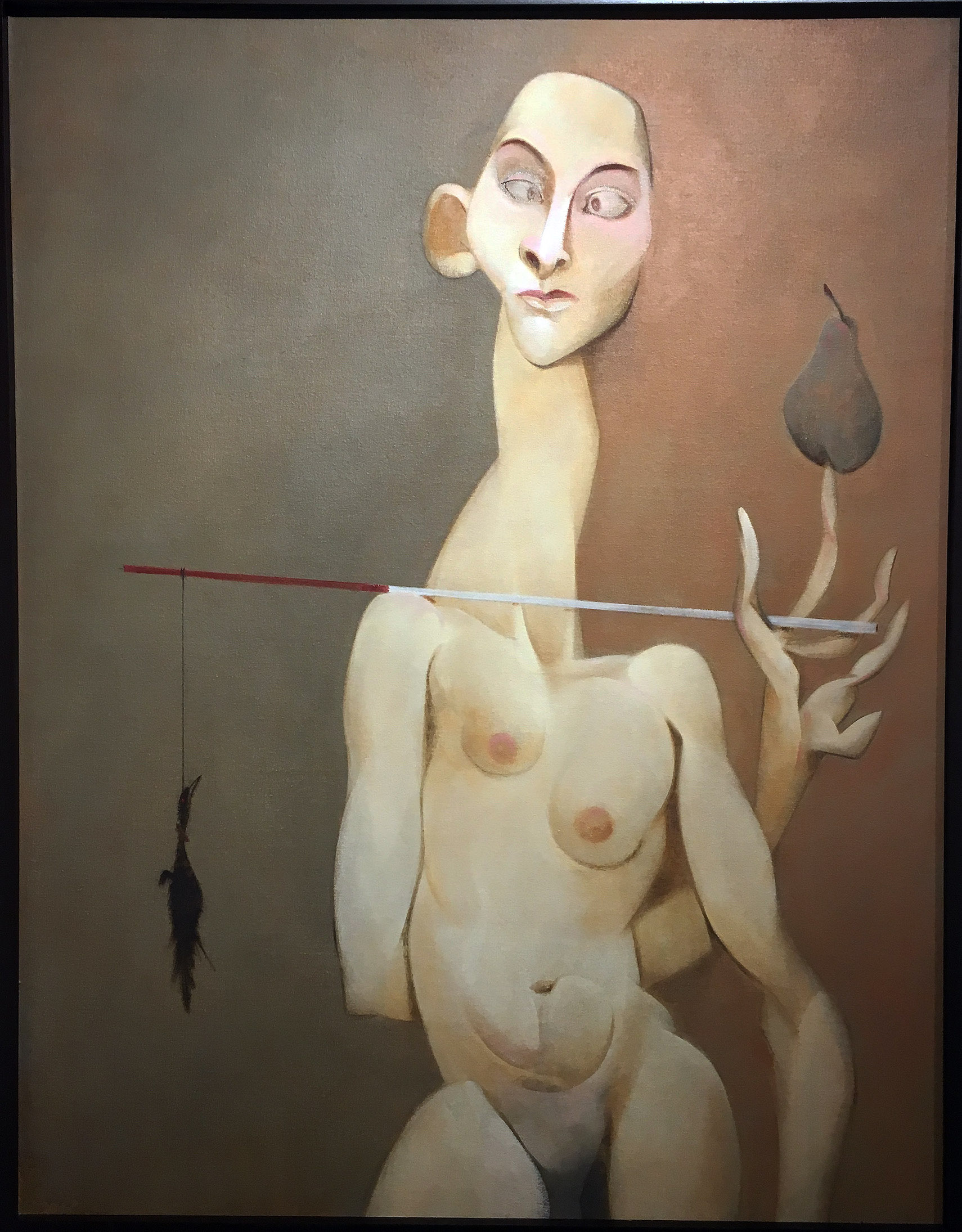 The contrast to Richie’s work is the Picassoesque figurative paintings by Kip Kowalski is dramatic, hence the title of the show, Simultaneous Contrast.  These satirical figure paintings incorporate a kind of surrealistic still life component. In the oil on canvas, IGGNOIRANTS, Kowalski dishes up a surreal one-eared female figure, a pear and a dead bird on a string with abstract elements in the wand and background.  He says in his statement, “My work is an audacious and blasphemous satire of human ignorance and apathy that confronts the absurdities I find in contemporary religious beliefs.  I tackle the biblical lore that is celebrated as fact over the findings of empirical science, such as the denial that evolution is real. My work is also a reaction to the pervasive attitude in many secular and non-secular societies, including our own, that women are the lesser gender.”

Kowalski’s paintings are grotesque at times as he admits, in that it may cause uneasiness to the viewer.  Are these visual distortions metaphors for the imperfections in our anatomy?  In the end, most people have a visceral reaction to viewing a work of art as opposed to the intellect, directing them to say either I like that, or not for me.  I find myself going back to Picasso in this work, whose painting from the mid-1930’s, especially the women seated series, remind me that he was the most prodigally gifted artist of the twentieth century. So when viewing Kowalski’s work, I make an effort to see his measure of detachment, perhaps even skepticism that results in a form of intrigue.  Kip Kowalski graduated from The Center for Creative Studies with a BFA and maintains a studio in the Detroit area. 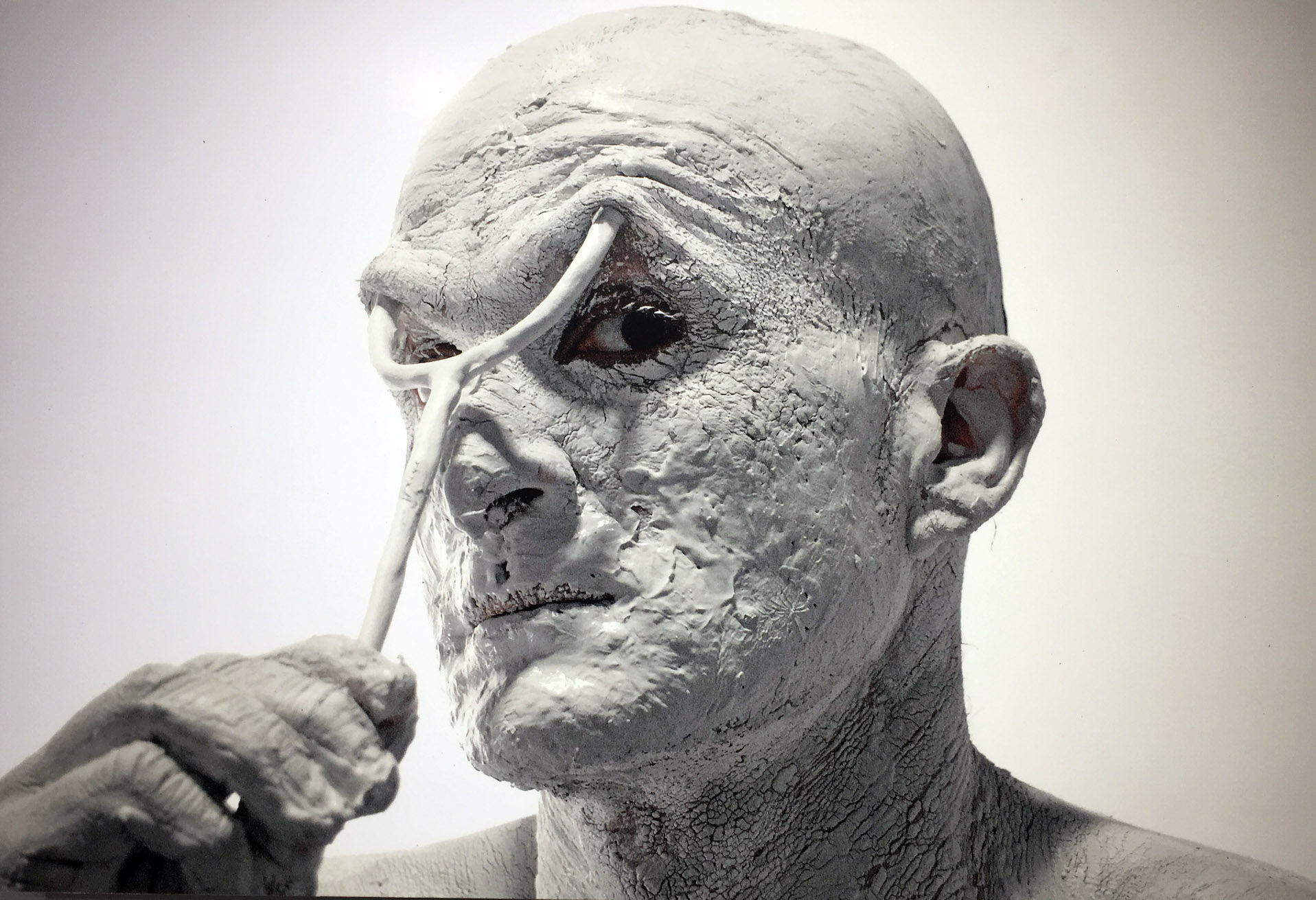 He says in his statement, “When I start a work, I tend to gather materials that I find may be useful to me. When combining the materials, I try not to make much sense out of my choices for fear of being too rational.  In the end, the work should serve as only a stopping point, prompting many questions but leaving them unanswered.” 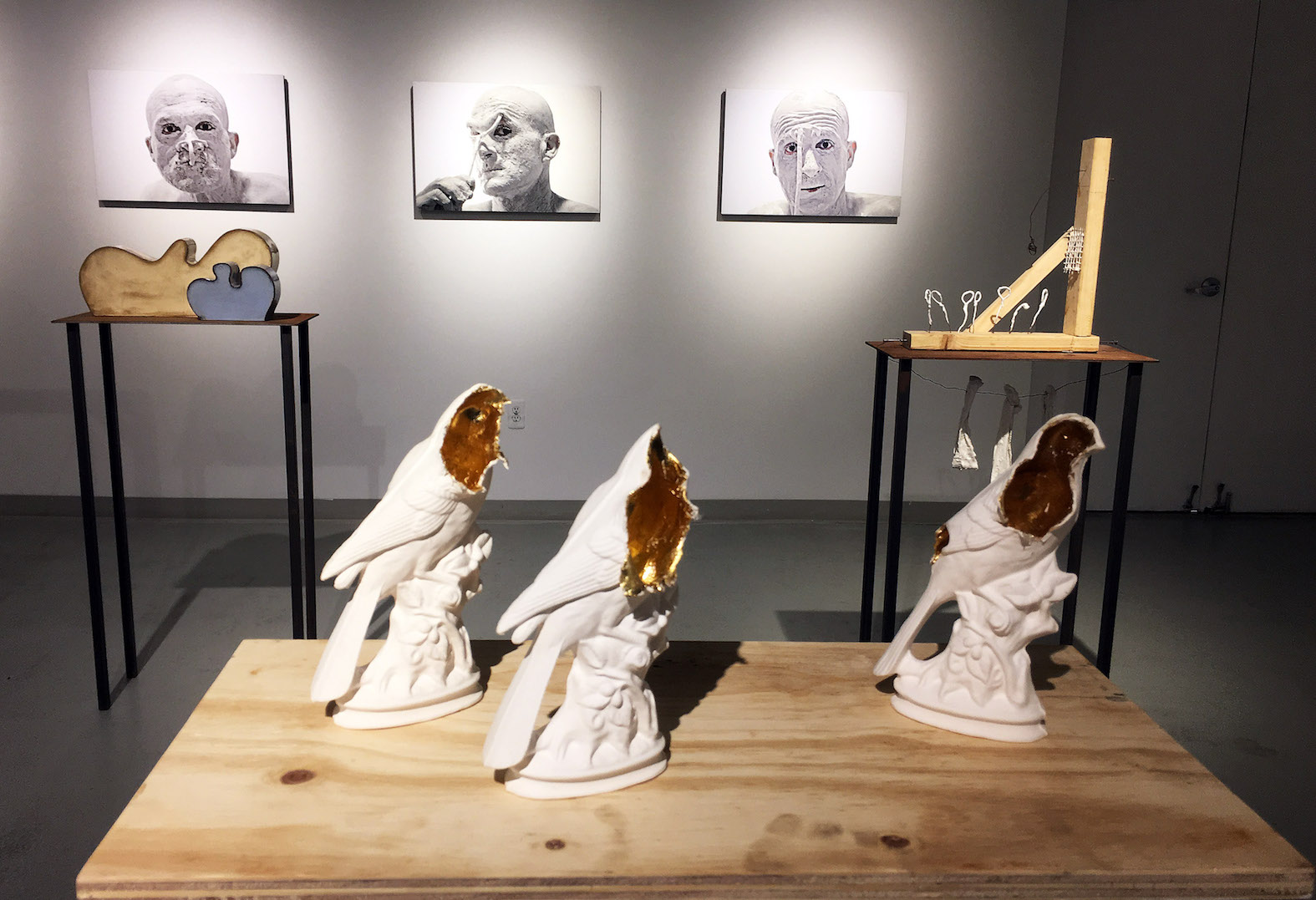 The Untitled work of these three birds, slip cast porcelain, with the interior of gold leaf is interesting, assuming they are not commercially made and altered, which would make them found objects. The base height seems right, but I would prefer more attention is made to the base’s top material: not plywood, but stone, or glass. Perhaps these works are like the artist says, stopping points, prompting many questions, but leaving them unanswered.  Born in Detroit in 1964, Russ Orlando received his Bachelor of Fine Arts from Wayne State University, Detroit and his Master of Fine Arts from Cranbrook Academy of Art, Bloomfield Hills, MI.  As part of his Kresge recipient statement he says his work is informed by the lure of the sell, shaped from his many years as an advertising agency art director. His sculptures and performances-which he calls experiences-often employ his body as a flash point for social criticism and a viewer’s self-examination. 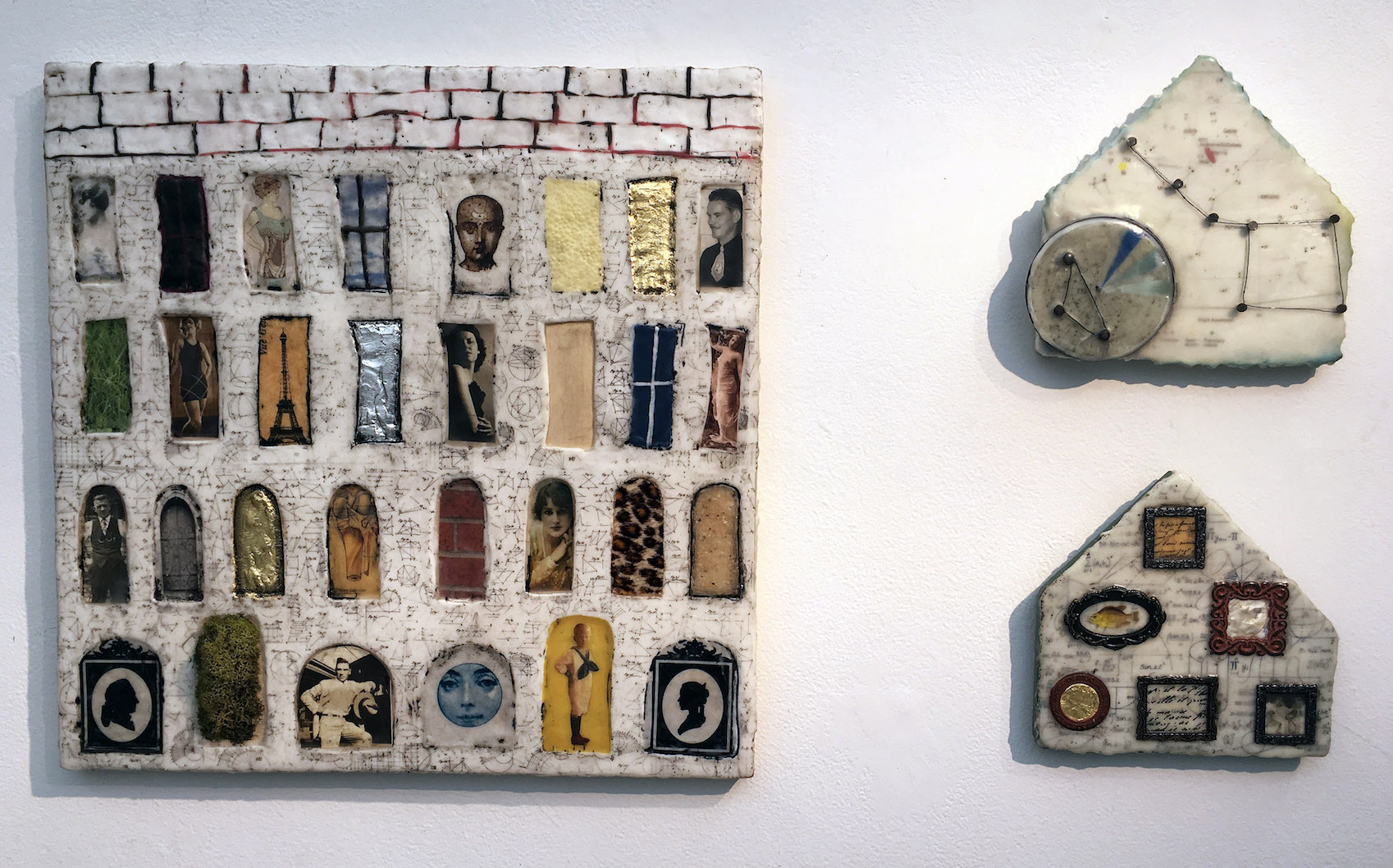 The BBAC has a Ramp Gallery that currently has the work of Rosemarie Hughes.  The smaller and more intimate work is base on a theme, The Home. In her statement she says, “My art is based on the idea of a home. I strive to create work that draws the viewer to take a closer look.”   Originally from the Detroit area, Rosemarie has lived and studied in Austin, San Francisco and London. She received a BFA and MA in photography but her passion for working with textures and a variety of materials ultimately led to her identifying as a mixed media artist.  She currently resides in the Detroit area where she divides her time between her studio and working as a licensed massage therapist.

The Birmingham Bloomfield Art Center is a model for communities through out the region to visit and learn how a non-profit can enrich their citizenry by offering classes, workshops, and exhibitions.