When colonial powers carved up the African continent, borders were drawn that indiscriminately sliced through culturally similar people-groups, and the inhabitants were subsequently viewed by Europeans to live in distinct, monolithic “tribes,” each of which lived in relative isolation.  Beyond Borders: Global Africa, on view in the University of Michigan’s spacious Taubman Gallery, emphatically makes the point that cultural exchange across African societies and between Africa and the West is and always has been fluid.

Gleaned largely from its own collection and supplemented by works on loan from the Mott-Warsh Collection in Flint, the art on view ranges from 19thcentury through contemporary, and spans across a diverse array media.  Collectively, as Laura De Becker articulates in the exhibition catalogue, they “illustrate moments of encounter throughout history, complicating the colonial idea that the African continent is made of up ethnic groups or nations with starkly defined, impermeable boarders, or that it stands at one end of a dichotomy comprising Africa and the West.” 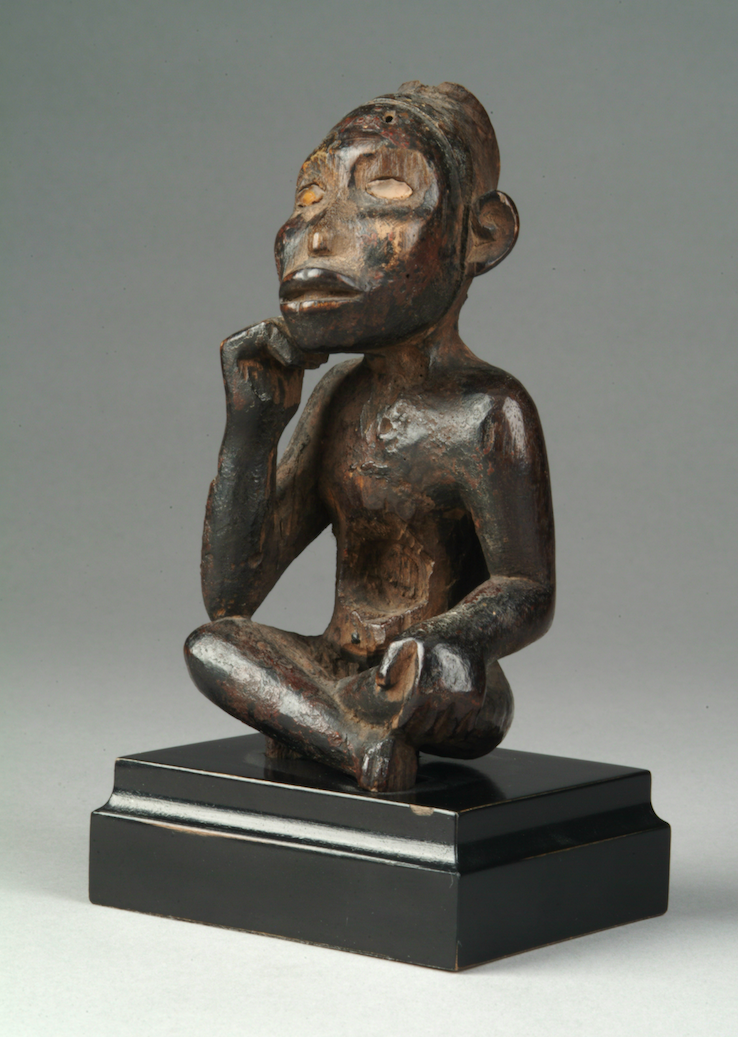 Several sets of carved sculptural objects demonstrate thematic similarities that transcend colonial-era borders.  A selection of Minksi (Power Objects), though varied in form—ranging from representational to highly abstract—demonstrate the widespread belief that the sculpted figure could be spiritually potent and even intercede on behalf of the living.

Many of these works synthesize local traditions with European elements.  A pair of ceremonial shoes decorated with beads, for example, alludes to trade between Nigeria and Europe (most beads were imported from Venice). Furthermore, the beads create a mosaic of the British Crown, and it’s ambiguous if the reference, ingloriously appearing as it does on shoes, is understood to be a respectful homage or a wry and subtle insult to the colonial power. 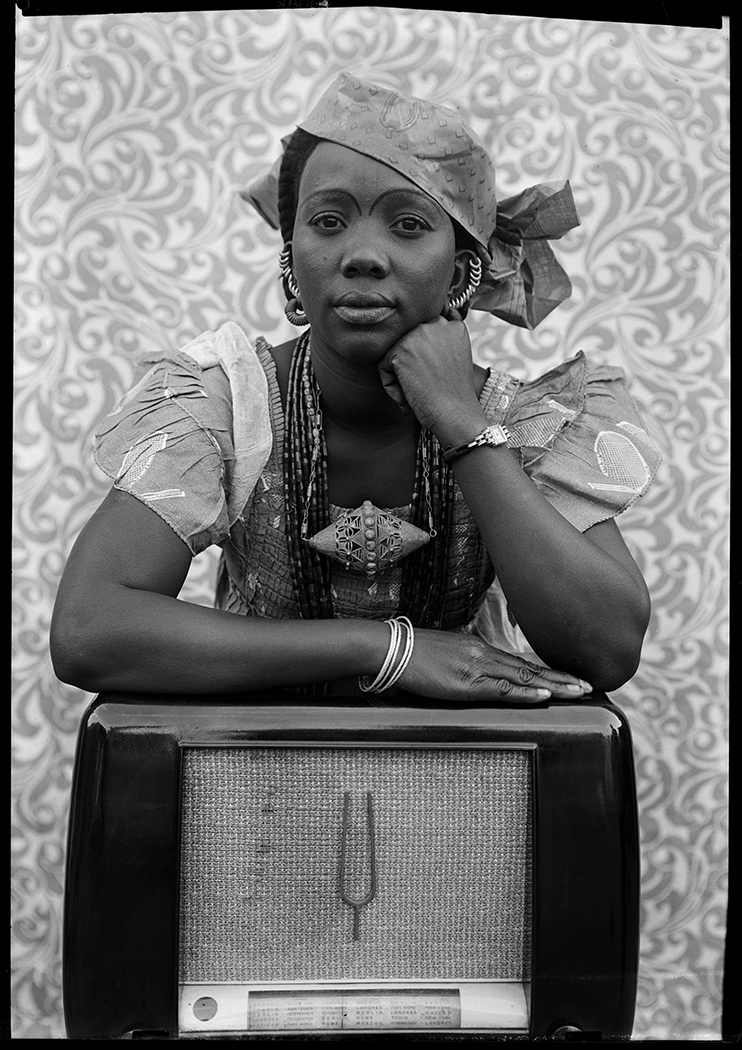 European faces make cameo appearances, carved into a Chokwe chair, for example, and European coins are inventively repurposed to decorate carved boxes and wooden figures.  Commerce and cultural exchange are addressed directly in a series of black and white photographs by Seydou Keita, hailed by many as the “father of African photography,” depicting anonymous residents of Bamako, Mali, posed with imported consumer goods that reveal the country’s rising middle class in the latter half of the 29thcentury. 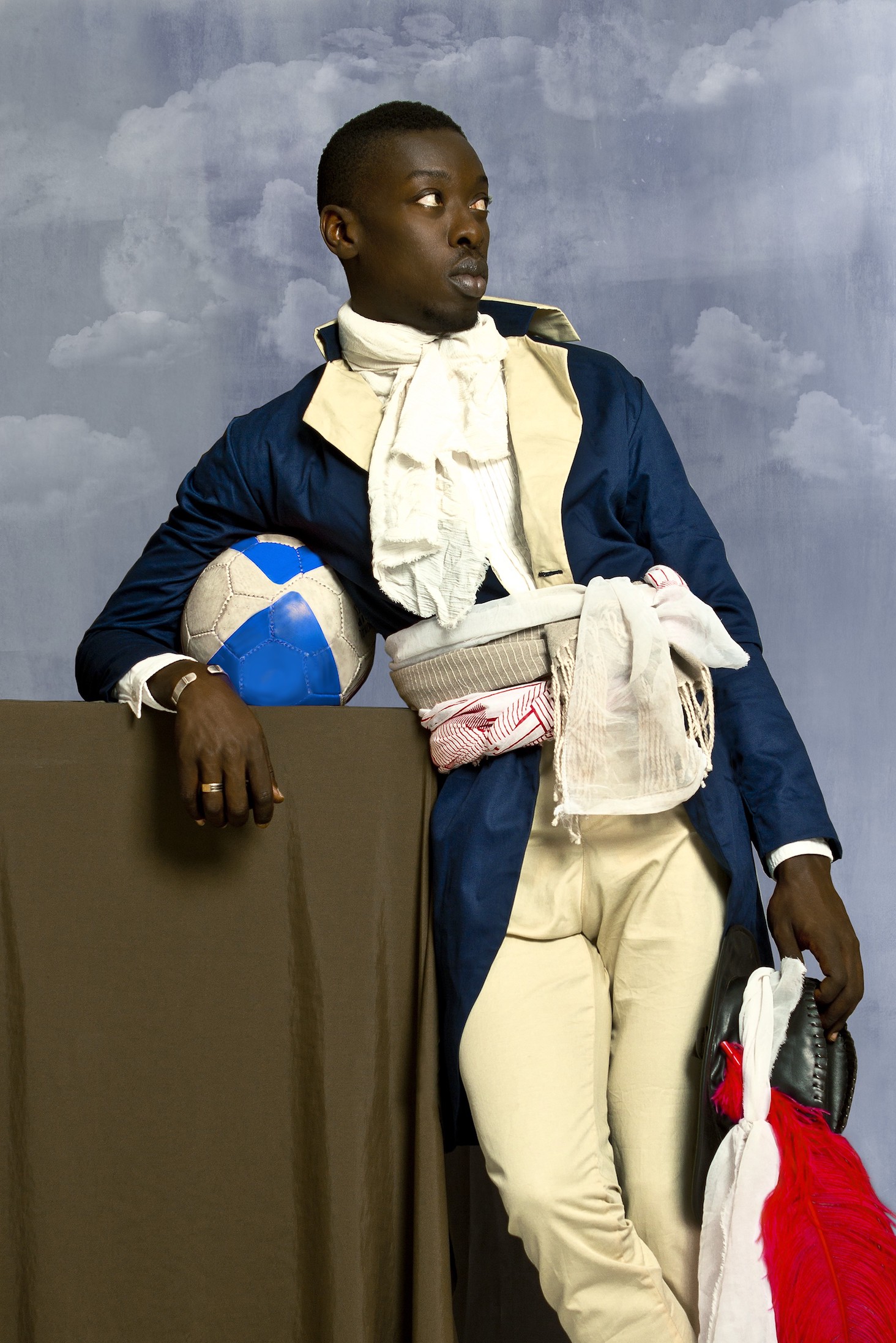 In a powerful pair of confrontationally large photographs, Omar Victor Diop recreates images of historically significant figures from the African diaspora.  Like the ever shape-shifting Cindy Sherman, Diop stars himself in his works, assuming varied roles.  Here, the artist recreates Samuel Miller’s portrait of Frederick Douglass, but modernizes it by brandishing a plastic referee’s whistle.  Sports paraphernalia invariably appears in his work, addressing the discrepancy between the celebrity status African athletes enjoy in Western countries and the xenophobic attitudes expressed by people in those same nations.  In a second photograph, the artist recreates a painting by Trison, posing as Jean-Baptiste Belley, a former slave who won his freedom after service in French army, and subsequently became a vocal abolitionist.  The soccer ball Diop poses with serves as a foil to his otherwise convincing 18thcentury regalia; just the same, the image, replete with the subject’s gentle contrapposto, really does seem uncannily as if a portrait from the Louvre has nearly come to life.

A painting by Kehinde Wiley lends a jolt of young and energetic star-power to this exhibition.   Known for his paintings that present works of art from the Western cannon reimagined to star black protagonists, here the artist borrowed the pose of a statue of Chief Obafemi Awolowo—a key figure in securing Nigerian independence from Great Britain—and transforms the figure’s outstretched hand into a black power salute.  Wiley’s work consistently manages to be emphatically contemporary, giving a fresh spin to the old masters, and giving the lie to the notion that traditional figure painting is dead. 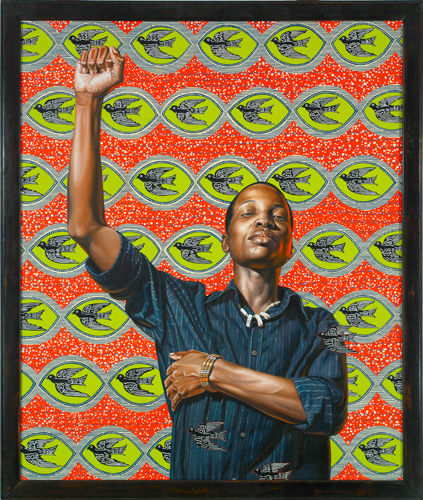 Beyond Borders succeeds in offering a cross section across mediums and across time, demonstrating in small part the extent to which cultural exchange happened in Africa and continues to occur today through its diaspora.  Furthermore, the national conversation in recent years has increasingly placed borders (and walls) at the forefront of political discourse, giving the show a timely relevance.

UMMA  –  Beyond Borders runs through November 24.