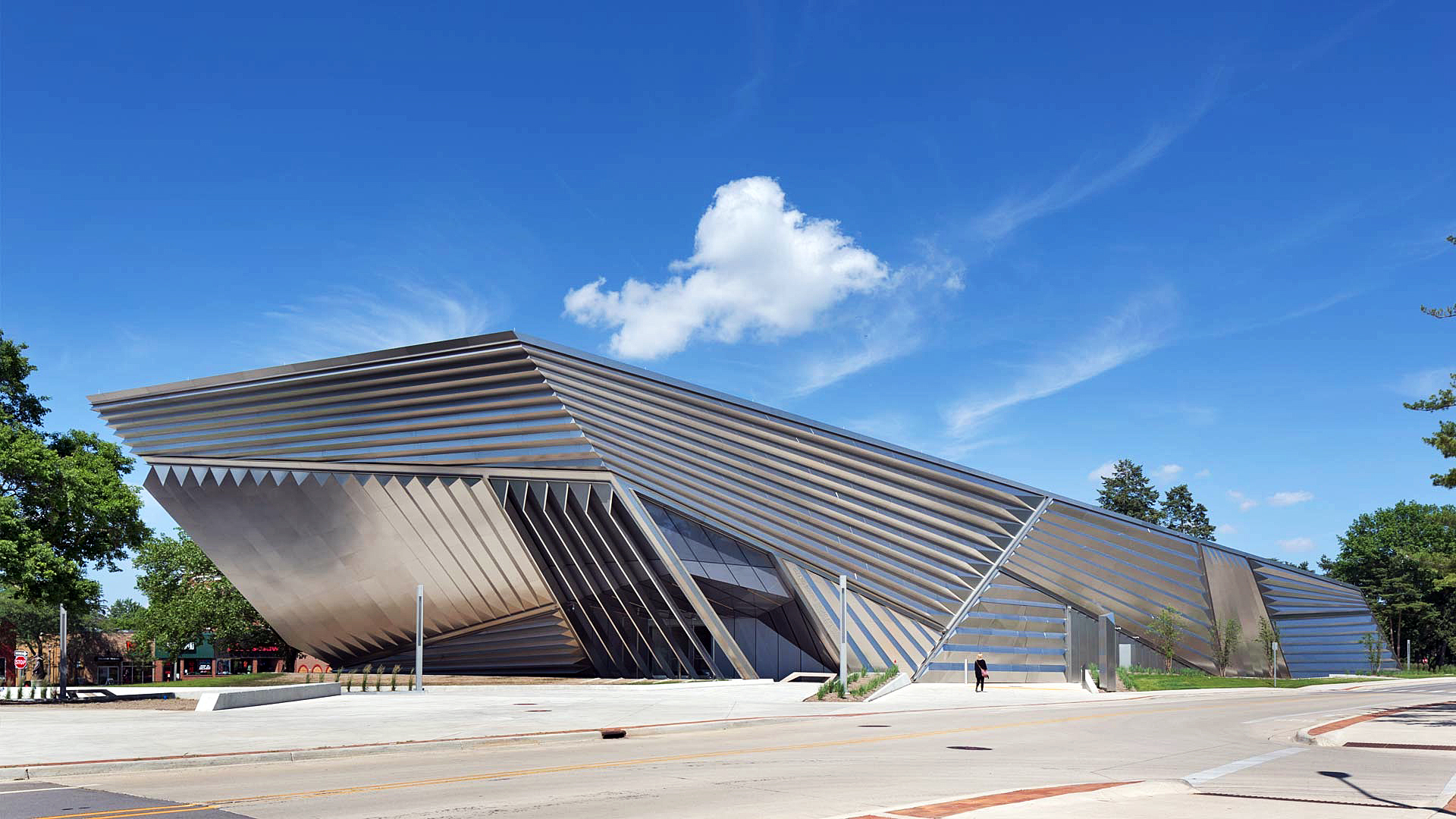 I once entertained aspirations of being a professional magician (I was never good, but at one point I could make all the faces of a deck of cards disappear, using a trick deck, admittedly). It’s likely for the best that I never pursued that career, but the Broad Art Museum’s Transported Man suggests that perhaps the world of art and that of magic aren’t that different. Both, after all, inexorably rely on the viewer voluntarily suspending disbelief.

The Broad’s new director, Marc-Olivier Wahler has a tough act to follow. The museum’s grand opening in 2012 featured works by art world heavyweights Andy Warhol, Joseph Albers, Anselm Kiefer, and Damien Hirst. The building’s architect Zaha Hadid even made an appearance. But, with over 400 exhibitions under his belt, Wahler capably delivers a conceptually interesting and visually arresting debut exhibition. His first show is an ambitious exploration of the relationship between art and viewer, and it brings together over 40 international artists, some quite familiar (Duchamp and Magritte) and others either emerging or mid-career.

The Transported Man derives its title from the magic trick of the same name, as depicted in the novel (and movie) The Prestige. Using magic as a motif, the exhibition, broadly speaking, explores the mutability of perception. Mundane items—magically—become art objects once placed in a museum. Furthermore, the exhibition tests the limits at which art can fool us. It certainly works. By the time you’re done on the second floor, you’ll have seen so much trompe l’oeil wizardry and visual sleight-of-hand that you’ll be thoroughly confounded as to what’s real and what’s illusory. The Broad’s counterintuitively shaped spaces, replete with walls that slant every which way, make the experience even more disorienting.

Stepping into the first level exhibition galleries, visitors will be met with a wooden table hovering in air; it’s propped up by a fan set within the floor (there’s no attempt at hiding that), yet how the air current so firmly holds the table in place remains a mystery. But the elephant in the room is, quite literally, the elephant in the room. It freely hangs with its trunk clasped around a rope affixed to the ceiling. Possessing all the convincing texture of an actual elephant, it’s actually a polyurethane resin, polyester, steel, and fiberglass sculpture by Daniel Firman. There’s something strangely beautiful and visually satisfying about the suspended creature so improbably defying gravity. (Look up Firman’s elephants on the internet; they’ve appeared in all sorts of places).

Perhaps the most disorienting work in the show is Synchronicity, an experimental work by Robin Meier and Andre Gwerder. It’s a big, black tent inside a big black tent. Step inside both and suddenly you’re walking on (and smelling, quite strongly, in fact) soil and grass, the atmosphere has suddenly become hot and extremely humid, and it’s very dark. Real crickets happily chirp away (afterhours, the lights within turn on, mimicking natural daylight, and the crickets, cicadas, and fireflies erroneously think it’s day). The work explores how we can manipulate nature through electronic stimuli. Small electronic LED lights stimulate actual synchronistic fireflies, which under the impression that it’s a hot, muggy night, flicker in a pulsating rhythm. While far from the point of the installation, I couldn’t help but reflect on our own susceptibility to electronic stimuli/media which we increasingly accept at face-value as truth.

Upstairs, the visual and sensory theatrics continue. In the corner of one gallery space you’ll find weeds sprouting improbably from the floor. They’re actually steel sculptures by Tony Matelli, and seem so convincingly real that you really do have to fight the urge to reach out and touch them…just to check. 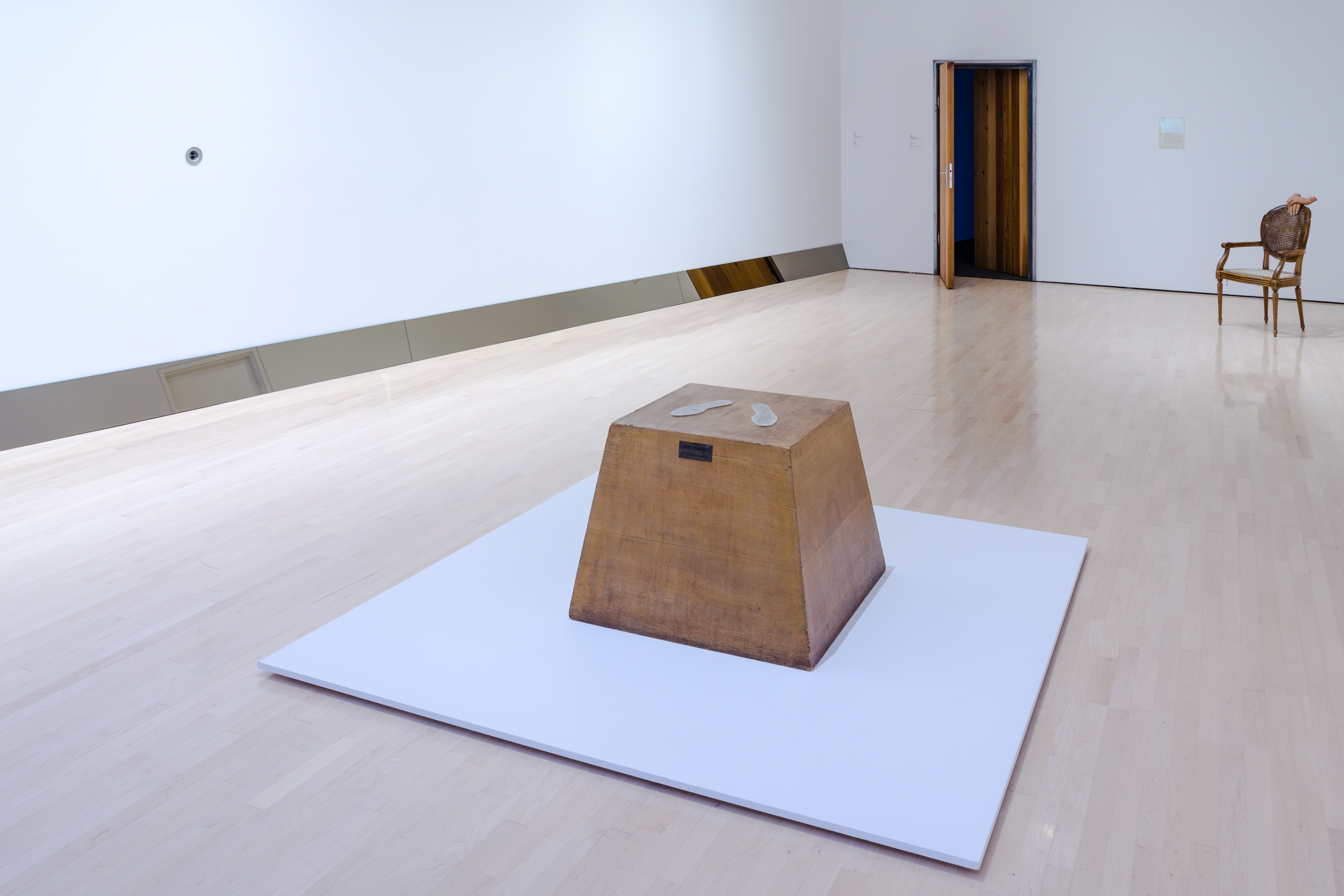 One subtext of the show is the uncanny transformation of mundane objects into works of art. The point is most explicitly made with Piero Manzoni’s Magic Base—Living Sculpture, a wooden pedestal upon which people are supposed to stand, thus momentarily turning themselves into art objects (for this exhibition, however, viewers are asked to kindly refrain from turning themselves into art objects, and thus help preserve the original base, now over half a century old). This also seems to be the point behind the many non-functional air ducts installed throughout the museum by Charlotte Posenenske, and the plywood plank (by Robert Gober) leaning against a wall. Visually, these works are uninteresting, but they nevertheless foster conversation about the nature of art, and in this respect they advance the goal of the exhibition.

Perhaps ironically, the most conceptual part of the show may very well be The Transported Collection, a playfully inventive adjacent exhibition of works from the Broad’s permanent collection. About forty paintings and drawings hang on a wall in one of the Broad’s lower galleries, but without any obvious reference to their corresponding artists. The viewer is left in a quandary: which of these works are, in fact, generally recognized as great works of art? Stealthily tucked in the corner of the room are some laminated explanatory cards which identify the artists. I cheated and peaked; the list is impressive– Van Dyck, Picasso, Delacroix, Matisse, Giacometti, and others. But some of the most compelling works on view were by artists I’d not heard of, such as Federico Castelluccio, who fools the eye with a convincingly illusory painting of a torn up, wrinkled postcard of a Titian portrait which seemed to be taped back together and affixed to a wooden background. This small exhibition wittily questions the subjective process by which we determine what constitutes great works of art. 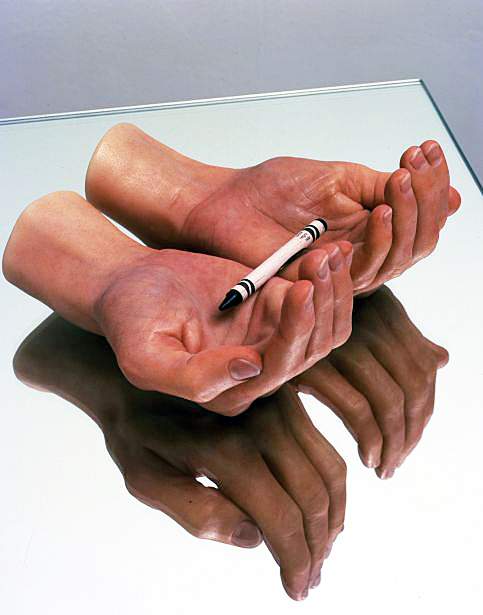 Picasso famously said that art is a lie which points to the truth. He was right; after all, the overwhelming majority of art history is comprised of artists trying to fool us into seeing three dimensions on a two dimensional surface. But it’s while looking at illusory paintings that we’re made acutely aware of the beauty of the actual world…or the shortcomings of human nature, as the case may be. Art’s deception has a purpose; to paraphrase from Shakespeare’s Hamlet, it holds up a mirror to nature, and within that mirror’s distorted reflection, we’re more able to see ourselves.   So while the playful theatrics and visual punning makes The Transported Man an eminently enjoyable and accessible show, there’s substance behind the visual magic that speaks to art’s ability to nudge us toward beautiful, enduring– sometimes uncomfortable– truths

Today, Frank Stella’s paintings (better described as sculptures, really) burst from the wall, exploding forcefully into our space. But it was Stella’s flat and austere Black Paintings created while he was still a student at Princeton that originally thrust him into the national spotlight. Through April 23, a modest but important ensemble of three lithographs recently gifted to the University of Michigan Museum of Art (UMMA) reminds us that before his paintings brazenly shattered the fourth wall, Stella was first and foremost the master of emphatically two-dimensional canvasses thoroughly unburdened by any adherence to illusionistic space. 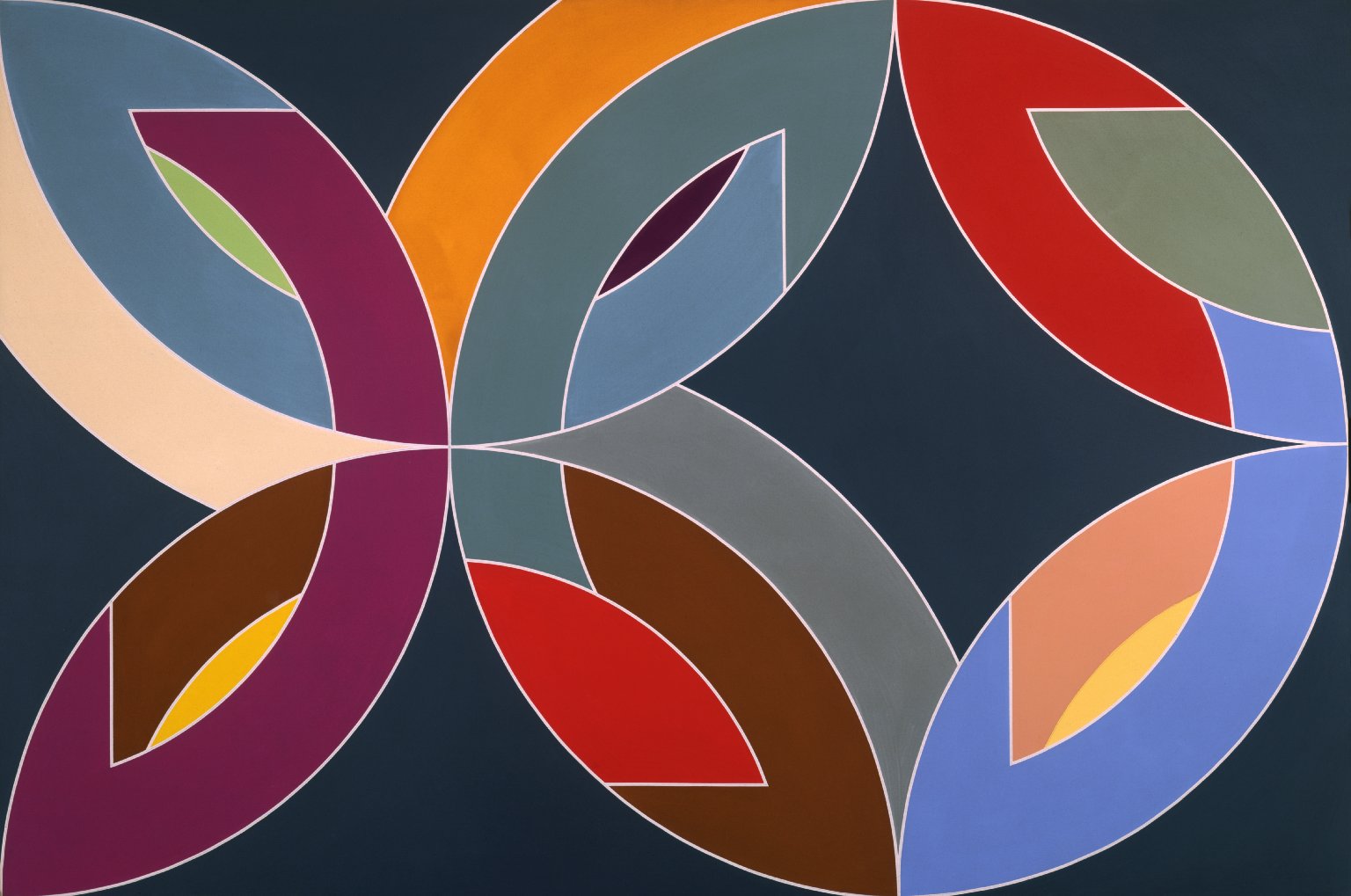 Stella’s meteoric rise began when, as a graduate fresh out of Princeton, his work was exhibited at the Museum of Modern Art’s Sixteen Americans exhibition in 1959. During the 1960s, Stella’s work adhered to the flat aesthetic of his Black Paintings, though he began experimenting with radically unconventional canvas shapes. Among these were his whimsical Notched-N paintings, canvasses which defied the centuries-old conception of painting as illusionistic and necessarily bound to the confines of a rectilinear surface. His stacked chevrons of muted color bands are never confined by any frame, blurring the boundary between painting and sculpture. In 1967, Stella began a famous collaboration with printmaker Kenneth Tyler, founder of the (then) Los Angeles based Gemini Studio, and Stella began to transpose his paintings into lithography.

It was one of many collaborations for Tyler, who also worked with 20th century art-world heavyweights such as Robert Motherwell, Josef Albers, Roy Lichtenstein, Jasper Johns, and David Hockney. With Stella, Tyler produced a series of lithographs based on Stella’s Notched- Ns. Look for Empress of India II; it’s a diminutive print based on the majestic, sprawling, 18-foot Empress of India in the permanent collection of the MoMA. The three lithographs on view in the UMMA’s Corridor Gallery were produced in the first year of their lifelong collaboration (they worked together until Kenneth Tyler closed his studio in 2000). 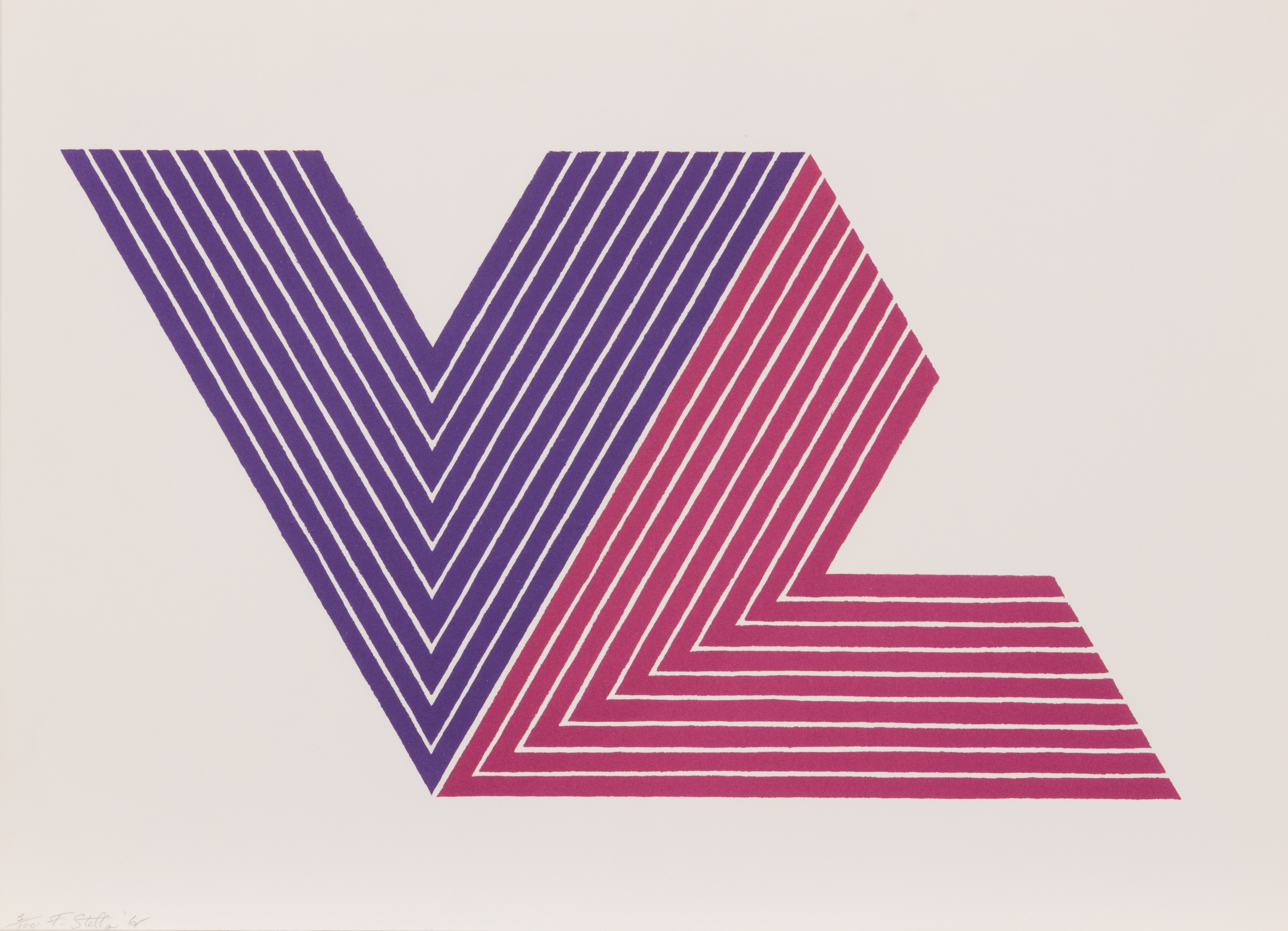 Initially, it’s difficult to be impressed by them, perhaps simply because as 21st century viewers, we might reflexively associate their crisp, geometric lines with computer-generated art—merely the photoshoped creations of easy copy-and-paste. But if we lean in close, we’ll see the subtle imperfections that betray the human touch. (Significantly, even Stella’s large geometric abstractions of the same era reveal marks of the human touch; lost in translation when reproduced in textbooks, in person we can see the subtle pencil lines that demark the separation between color borders.) The lithographs are also tactile; the ink rising from the page gently but unmistakably pushes out into our space; one lithograph even shows gentle signs of distress; an effect which doesn’t translate in digital reproduction. 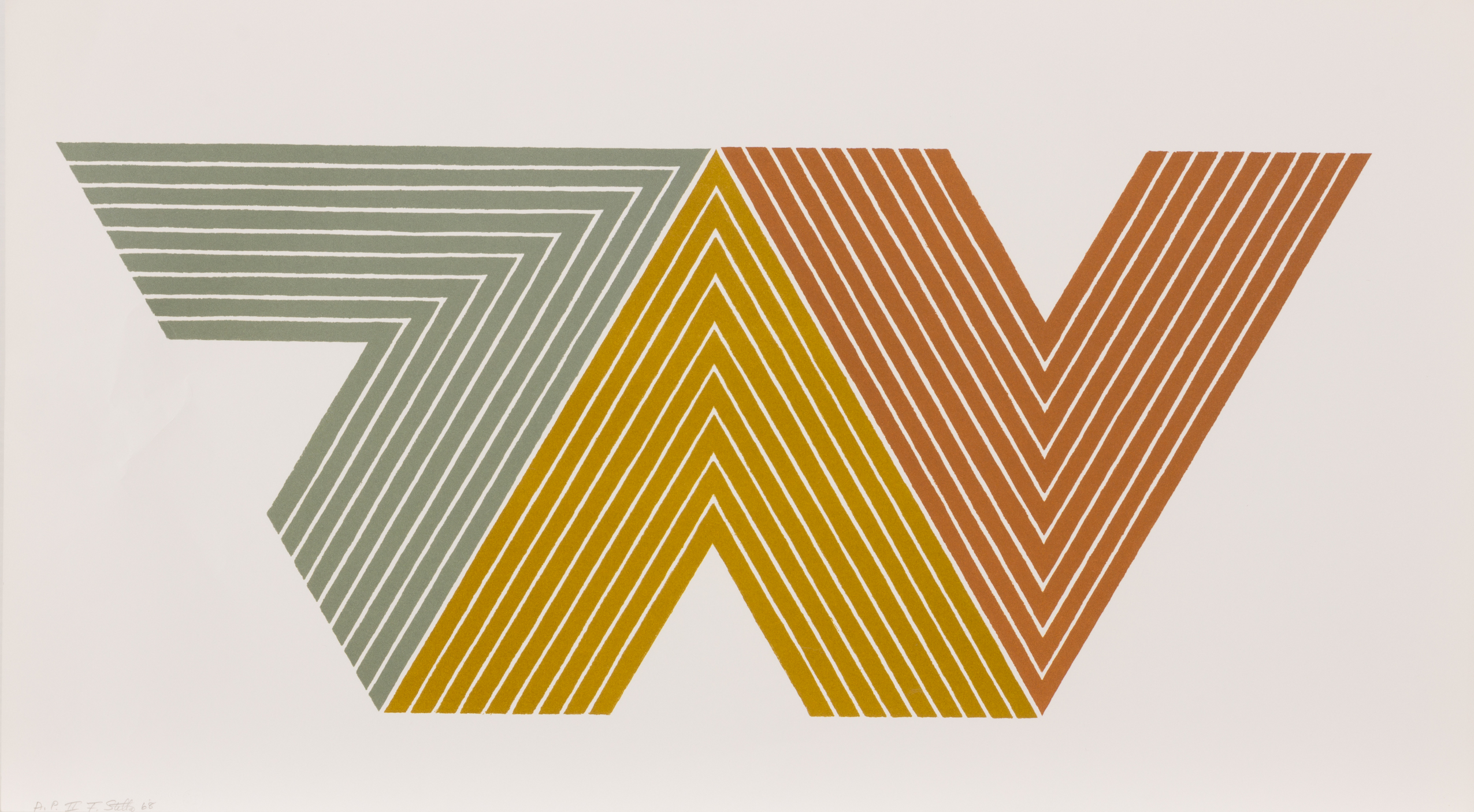 Long after he had moved beyond his minimalism, Stella maintained his partnership with Tyler. Among the more famous (and audacious) of their later collaborative works was Stella’s series of loosely illustrative prints based on Herman Melville’s Moby Dick. These intensely sculptural prints press out into viewer space, and– technically virtuosic– took years to produce.

Today, Stella’s works are, at least on first appearance, the complete antithesis of his minimalist abstractions of the 1960s. Take, for example, his playfully obnoxious La penna di hu (1987-2009), a recent work currently on view at the Toledo Art Museum. It’s sculptural in every sense, perhaps its only initial commonality with his paintings of the past being that it hangs on a wall. Yet, like Stella’s Notched-Ns, it nevertheless fights the notion that art should be illusory, and, in this respect, Stella’s oeuvre has remained strikingly consistent.

In comparison with his playfully sculptural three-dimensional collages, the works from Stella’s formative years as a minimalist artist perhaps seem weighted down by an austere solemnity, their meticulously calculated arrangements of shape and color eluding interpretation. But these serene, meditative works brazenly defied the notion of art as the conduit of illusion and narrative, and the three lithographs on view at the UMMA stand as historically important documentation of Stella’s celebrated early days as 1960s minimalist, emphatically the art world’s undisputed modernist master of Flatland.