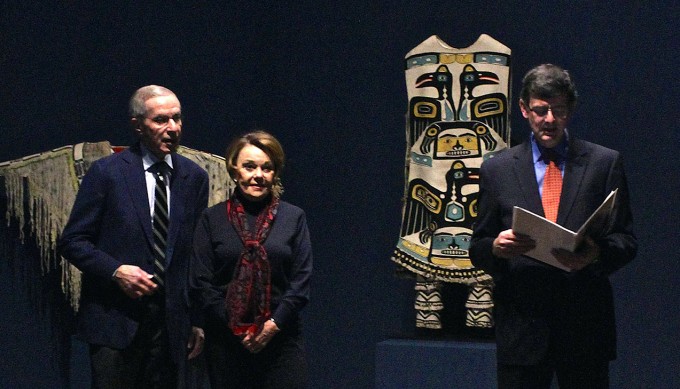 This month, the Toledo Museum of Art opened the fourth and final installation on the tour of Indigenous Beauty: Masterworks of American Indian Art from the Diker Collection. The show features a breathtaking array of cultural artifacts and several contemporary works of Native American art, collecting material culture from tribes that spanned the North American continent. Charles and Valerie Diker, who were approached by the American Federation of the Arts to create this exhibition, were on hand for the opening and to present a Master Series Lecture at TMA on Thursday, February 11. Their relationship with fine art collecting began with modern art, and having been drawn to Taos, New Mexico, they found similar points of resonance in Native arts. They describe their interest as aesthetic-driven, choosing to seek out and present survey of the most virtuosic examples of work by members of many different tribes and regions, rather than specializing in a particular area.

Some of the highly decorated garments in the Plateau & Plains region.

And virtuosic, they are. The Dikers concern themselves only with masterworks in their collection, and each piece represents skill, generational knowledge, and many hours of labor-intensive handwork. The exhibit is clustered by territory, giving one a sense of regional areas of expertise—pottery and Katsina figurines from the Southwest, wooden masks and tusk-carvings from the Western Arctic, basket-making in the Great Basin and California area. In the plateau and plains region, there is a great deal of detailed clothing, and tucked in the furthest reach of the exhibition, some breathtaking renderings of battle memories—the Great Plains area being the place where the West was truly won, or lost, depending on your perspective. 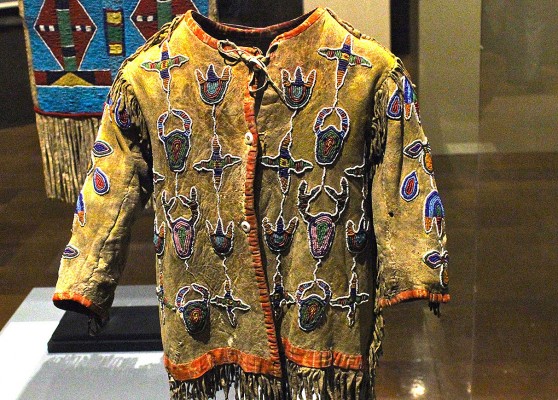 A decorated deerskin hide from the Plateau & Plains region.

That perspective is perhaps somewhat lacking, when it comes to this presentation. While the Dikers’ attraction to beautiful objects and their 40-year efforts to amass them is quite understandable, the show’s focus on beauty seems vaguely tone-deaf in light of the brutal history and continuing struggle for recognition associated with the early citizens of America—a process rooted in a similar kind of acquisition-based approach to native property. While the Dikers acknowledge this art as representative of “the first Americans,” and state that the intention of sharing their collection is to educate, there is also a sense that the concept of indigenous Americans as fully actualized and deeply expressive people (rather than cowboy-versus-Indian caricatures) is something of a revelation, in and of itself. 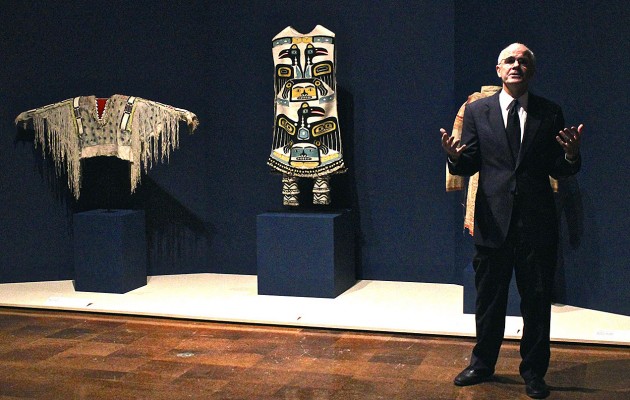 Or, as stated by guest curator David Penney—one of the country’s leading scholarly thinkers and art historians in the field in American Indian art, and Associate Director of Museum Scholarship at National Museum of the American Indian in Washington, D.C.—in a brief one-on-one interview during TMA’s media preview, “American Indian culture is often thought of as something long ago, far away—an almost fairyland American Indian. It’s big in American imagination. In a sense, Americans invented American Indians that never existed. And so, those are the kinds of images that casual visitors to museums—through no fault of their own—bring to exhibitions like this. So I think it’s important to try to reconnect them to American history and [challenge] this idea that American Indian culture vanished or disappeared. That was a prediction made in the 19th century, and it’s still not true. It never was true.”

Perhaps this need to educate at the baseline is real. It is certainly worth acknowledging that there is a prevailing and biased narrative around American history, and the questioning of that narrative is an absolutely necessary precursor to change. Despite a dawning cultural awareness that holidays like Columbus Day go beyond exceedingly poor taste, there are plenty of people who guilelessly celebrate Thanksgiving as a building block of our nation (or are just happy for a day off work). Perhaps it would indeed surprise these people to consider that the skill, soul, and care invested in these cultural artifacts are a reflection of the thriving culture that very much plays a part in the shape of modern-day America. Certainly in a place like Toledo, Ohio, there is a preponderance of artists and craftspeople who can relate to the exquisite handwork of carving, beading, vessel-building, garment-making, and weaving that elevates these objects. As Charles Diker said, in his opening remarks, “There was no word for “art” among these (native) languages, it permeated every aspect of life.” 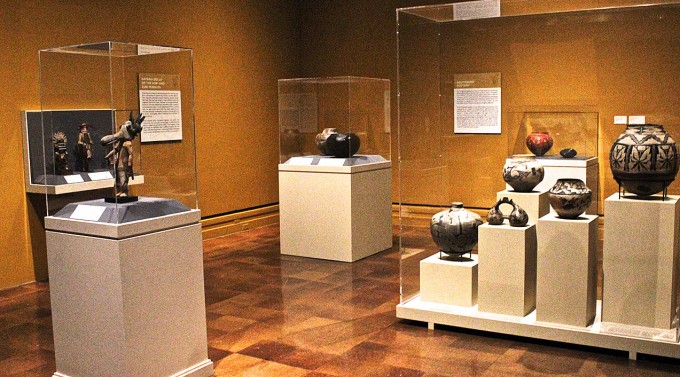 In the same way that art and daily living were intertwined within the cultures that produced these artifacts, it is difficult for me to contemplate their beauty without also feeling a resounding sense of loss—for the people that were killed, relocated, and stripped of their heritage; for the artistic voices that were silenced or lost in the shuffle; and for contemporary society, being shaped by the inability of the colonists to envision an America that embraced and incorporated their predecessors. I can find no fault with the objects on display, and the question of their inclusion in the art canon is inarguable. If the garments standing empty on wire frames seem to imply a kind of absence, perhaps that is all for the better. Art and beauty can be, as is so often the case, the jumping off point for more a serious process of reconciling the pain in which all of us, as Americans, are complicit.

Indigenous Beauty: Masterworks of American Indian Art from the Diker Collection  –    February 12 – May 8, 2016